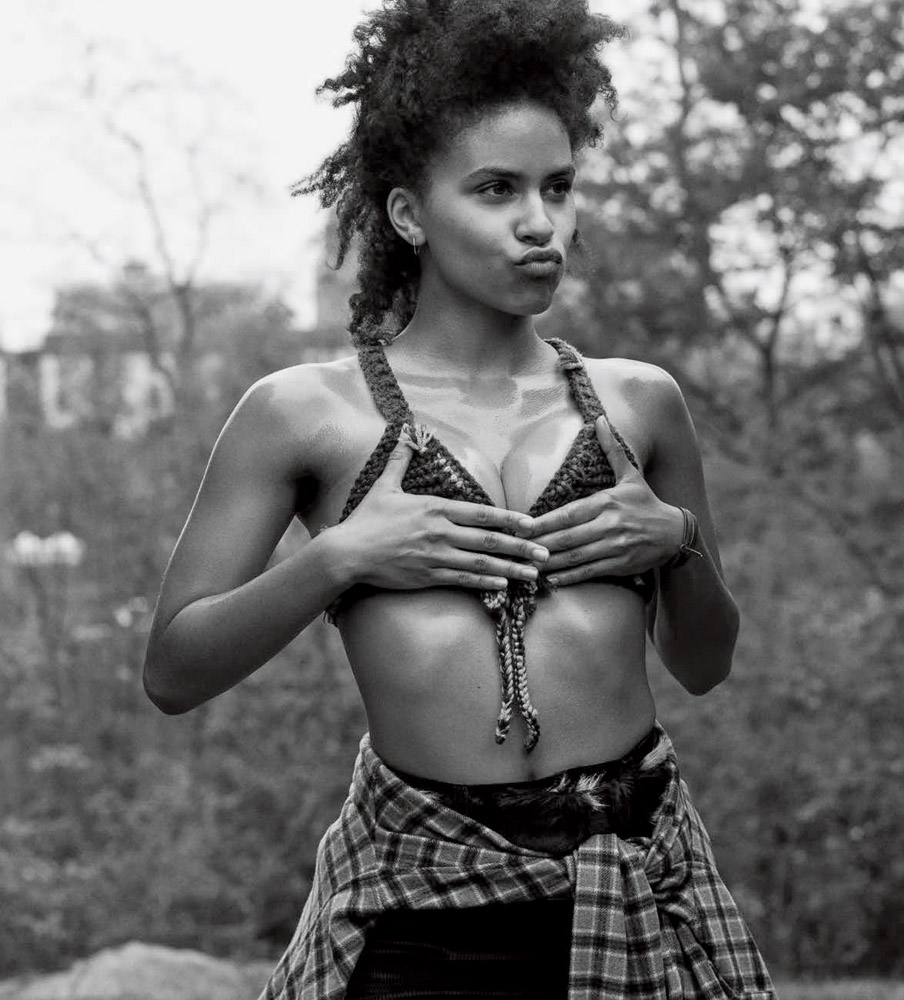 On Atlanta, the FX comedy described by its creator and star Donald Glover as “Twin Peaks with rappers,” Zazie Beetz plays Van, the pragmatist in a plot that generally moves forward one bad decision at a time. In a show about millennials hustling to make it, Van is an argument for some semblance of sanity. Even if we don’t have it all figured out, she seems to be saying, even if we can’t pay the bills, life doesn’t have to be so bad. Off-screen, Beetz seems as rooted and Zen as she does on TV.

The 26-year-old actress was born in Berlin and grew up between there and New York, where she studied acting at the storied LaGuardia High School. She studied French at Skidmore College but never strayed too far from the theater, from auditions, from the hustle. “This work is hard,” she wrote on her website in fall 2015. “Sometimes, often times, my confidence is through the floor and I’m asking myself what the hell I’m doing and whether or not I’m good enough. But then something just right falls into place, and the worries go away for a flicker of a moment.” Sometimes longer than a flicker: in addition to landing a role alongside Chance the Rapper in the top-secret horror comedy Slice, Beetz was recently cast, across from Ryan Reynolds, as the mutant mercenary Domino in the Deadpool sequel.

In between training for the film, and learning to drive, Beetz checked in with her friend and collaborator Glover to discuss the overlap between brand-building and pig-killing.

ZAZIE BEETZ: I’m good. Oh, wait. Sorry, somebody’s calling me. Oh, god. My mother’s calling me. Hold on. Actually, never mind. I’ll call her back later. How are you?

GLOVER: Crazy, but good. I’m living mostly in London now. It’s the first time I’ve lived-lived there. The food sucks. Everything is fatty but, like, not tasty. Soul food is heavy, but at least it’s flavorful. Anyway, congratulations. You’ve been busy.

BEETZ: And still, I wish I could be doing the Star Wars movie with you. [laughs] I started training this week [for the Deadpool sequel] and I don’t really go to the gym, so my body’s been like, “What the fuck?” All of a sudden I’m craving fruit and celery.

GLOVER: [laughs] Meanwhile, I just ate three burgers. I guess we could keep talking about random shit or I could ask you some actual questions. Do you consider yourself a hippie?

BEETZ: I feel like maybe you’ve had a similar thing, but recently I’ve realized that the body, the world, and the mind are all one thing. I’ve begun feeling that my responsibility is to the Earth. Our generation’s war is climate change, so I’ve really been modifying how I eat and what I eat.

GLOVER: It’s not like I’m proud of eating those burgers.

BEETZ: Agriculture is one of the biggest causes of greenhouse gases in the atmosphere. Cars? Planes? Trains? Nope. Cow farts. I struggle with feeling like I should go completely vegan, but I had a donut yesterday, and that shit was good.

GLOVER: This is the first time in human history where you can be like, “I want cheesecake,” and you can just have it.

BEETZ: Without having to raise it and kill it. Didn’t you want to kill a pig at some point?

GLOVER: I wanted to see if I could. My thinking was that if I couldn’t kill it, I also couldn’t eat meat. A lot of people have social agendas now. Everyone has a brand, and part of that is an online social agenda. Do you feel that you need to contribute to that conversation?

BEETZ: I do, actually. But I don’t have a Twitter account. I don’t really do Facebook anymore, and sometimes I’ll go six months without checking Instagram. I do wonder if it’s my responsibility to spread a message of environmental awareness or political awareness or just, like, don’t be racist or whatever, but I don’t want to be the person who’s like, “Everyone be vegan forever!”

GLOVER: It’s hard to be a full person online.

BEETZ: If you Google yourself, do you feel like your whole personhood is represented?

GLOVER: Absolutely not. I think that’s why almost everyone has their own, very different ideas of who, say, Meryl Streep is.

BEETZ: A lot of people don’t understand that in interviews you often talk about something for an hour, but then it becomes a paragraph in an article. The whole time you could be like, “I love apples,” and then in passing you’re like, “…and bacon.” And of course, that’s the only thing that gets printed.

GLOVER: As a black woman, do you feel the pressure of having to represent something bigger than yourself?

BEETZ: Yeah, I do. I was talking to my mom the other day and she said, “White people in the industry don’t realize that actors of color need to appeal to white people while also not becoming the black celebrity that black people don’t like.” If you’re not black, you don’t have to think about that.

GLOVER: It’s very specific, and it’s something most people don’t get. I think they assume it’s not an issue anymore.

BEETZ: It’s very much a thing. Regarding my personal brand or whatever, I think you kind of fall into it. It wasn’t until about a year ago that I was like, “Oh, I get how people are reading me.” They see me as a natural chick who, like her hair, is kind of weird and crazy. She likes patchouli and doesn’t wear deodorant. And I don’t mind that, but I didn’t necessarily choose it for myself.

GLOVER: Even the “Cash me outside, howbow dah?” girl has a brand.

BEETZ: [laughs] That’s the other thing about fame today—literally, anyone can pick up an iPhone and become a celebrity.

GLOVER: I look at the Internet as a giant Ouija Board. I might not want to be branded one way or another, but the Ouija Board of the internet is going to choose it regardless. You can either be yourself to the fullest or you can manipulate it, but then you’re giving up a piece of yourself. I don’t think I could be Kim Kardashian, or someone whose real life is so intertwined with whatever people are reading about you. Robert Redford was once asked, “Are you really Robert Redford?” and he said, “Only when I’m alone.” I love that, because it’s true. You’re only really you when you have nothing.

BEETZ: And with any sort of notoriety, suddenly you have all these strangers who think they know you. But I do have to say, I’ve been lucky for all the positive support and feedback I’ve gotten.

GLOVER: Have you met any of the Deadpool people yet?

BEETZ: Not really. I met Ryan [Reynolds] and his wife, and I met the director, David Leitch.

GLOVER: What’s been your most Hollywood moment so far?

BEETZ: My boyfriend’s brother recently called to tell me that he’d met this woman while he was working at a bar. He mentioned that he knew me, and she started crying and was like, “Oh, my god. I’m doing my whole thesis project on her character in Atlanta.” I ended up talking to her, and it was a lovely conversation. It was very moving.

GLOVER: What did you expect from Atlanta?

BEETZ: From the show?

GLOVER: Yeah, when you first got it.

BEETZ: I remember thinking, “Okay. People are going to watch this.” The script was good and people love you.

GLOVER: What kind of roles do you really want to play? I’m writing scripts now, and it’s funny—did you see that photo of Rihanna and Lupita [Nyong’o] together at a fashion show that went viral on Twitter, with people begging them to make a movie together and tweeting lines to include in the script? I’m excited that people want to watch that movie, but we can give them a better movie than that. Twitter shouldn’t be writing it.

BEETZ: Why is Reddit writing the script? [laughs] One day I’d like to tackle a biopic. I grew up very influenced by Josephine Baker, Billie Holiday, and Nina Simone.

BEETZ: Really? That is the highest compliment. I think I’m too light-skinned to play Nina Simone.

GLOVER: I remember being really into a TV movie about Baker. Hang on, let me look it up. Oh, yeah, The Josephine Baker Story on HBO. It came out in ’91.

BEETZ: Time for a remake. [laughs]

DONALD GLOVER IS THE CREATOR AND STAR OF THE FX SERIES ATLANTA. HE HAS ALSO RELEASED THREE ALBUMS AS CHILDISH GAMBINO.