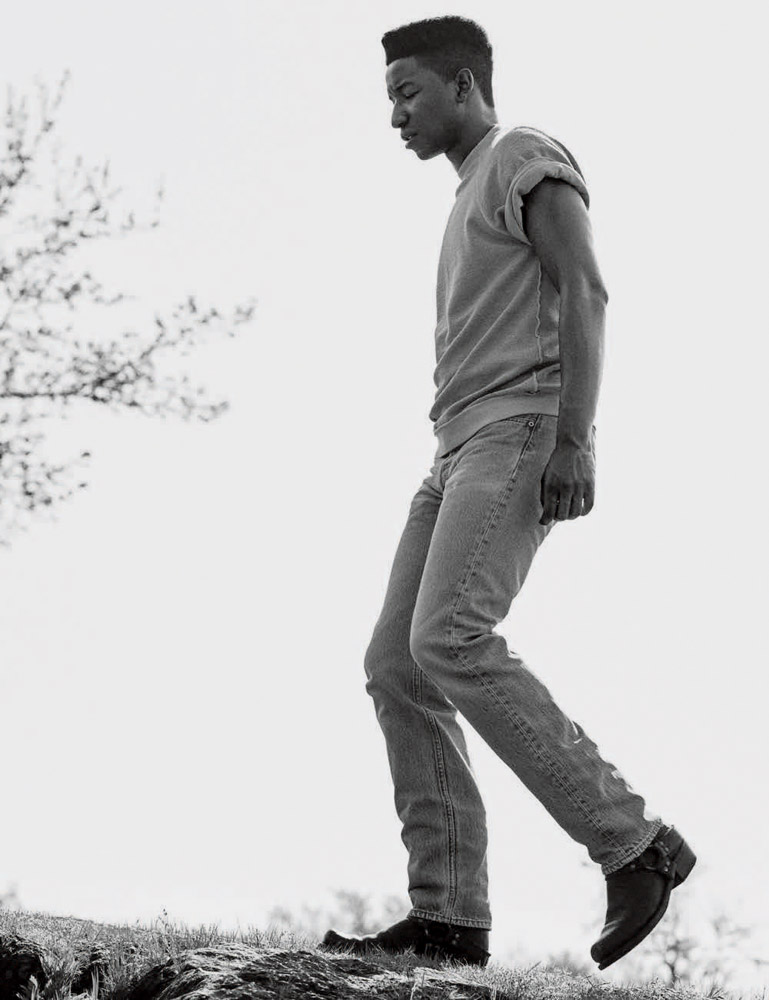 UP NEXT: As Basterd, the loner musician love interest in Patti Cake$; in the thriller Underwater, with Kristen Stewart and Vincent Cassel; in Brie Larson‘s directorial debut, Unicorn Store.

Brie Larson is amazing. She should get all the awards for everything, ever.

INTRO TO CINEMA: I didn’t watch a lot of movies growing up. I felt like I did, but they were all the big studio films. Then occasionally I’d see something like Life is Beautiful and watch it 15 times, because that movie… oh man. Now I’ve really figured out where my taste lies. I’ll sound like an asshole, [but] just generally movies that have some kind of import or artists that I love watching. There’s this cinematographer I’m doing this movie [Underwater] with, his name is Bojan Bazelli, and I’ve never heard of such a genius in my life before. He’s a scientist in the way he sets up a shot. And the cinematographer I did Patti Cake$ with,  Federico Cesca, anything that he’s going to DP, I’m there.

PROFESSIONAL TRAINING: I went to one school that shall not be named, for its own propriety. Then I went to William Esper Studio. I had a great time there and fell in love with acting legitimately. I graduated and started doing the open call thing: “Here I am, world!” No one would see me, because who are you? One out of 50,000, at least. Then I kept on seeing shows where people would have certain skills that I knew I could do, but didn’t know how to. One day I was at Shakespeare in the Park, and I was like, “Fuck it, I’ve got to go back to school.” So I went to Yale [School of Drama]. Yale was a really great time. It wasn’t as hoity-toity as I was afraid it would be.

ACTING IDOLS: The first person that came to mind was Joaquin Phoenix, because he just does what he wants and it’s great. Ryan Gosling, he also does what he wants and they happen to generally turn out very well for him. Denzel does a movie a year and it’s always a winner. I always liked Chiwetel [Ejiofer]’s career. Tilda Swinton has a career that I’m like, “Hello…” Or Cate Blanchett.

POST-GRADUATE WORK: My first paid job after Yale was probably this movie that’s not even on my IMDb. I loved it. It was called Experimenter. I literally had no lines in it. I just walked down the hallway past Peter Sarsgaard, crying. John F. Kennedy had just died, and I think it was just to see how society as a whole was affected. That was that. When the credits come up, my role is “Crying Man.” It came out on Netflix and my friend Justice Smith sent me a screenshot of my name, horrifically misspelled: “Athie Miamioudiou.”

PATERNAL ADVICE: A couple of months out of school, when I was in New York trying to get seen, my dad called me: “Have you ever thought about photography?” I was like, “If you’re going to suggest an alternate career, photography is not the way to go.”

BEST ADVICE: “Would you rather be right or interesting?” That’s top five. That was my professor [at Yale] Ron Van Lieu.

FLASHIEST PART: When I auditioned to play Grandmaster Flash in The Get Down, the role was titled “Master DJ.” That was it. I was like, “I don’t know who this dude is, but it feels very specific in the text,” so I just leaned into my gut instinct. My friend Yahya Abdul-Mateen II was already cast as Cadillac before he even graduated, so I was like, “Well, I’ve got to join this train!” Then I walked in one day to meet Baz Luhrmann, and everyone was like, “Flash!” I was not cool about it at all. I’m so glad I didn’t know before the audition.

SECRET SKILL: I played trumpet for a bit. I remember watching a Muppets movie once and one of them was playing trumpet. I was like, ‘That Muppet is killing it.” I was very inspired.

For more from our “Youth in Revolt” portfolio, click here