Top by Hermes. Skirt by Isa Boulder. Brooch (worn on skirt) by Chanel. Socks by Falke. Shoes by The Attico.

For our September issue, Keira Knightly gets inside the head of her Silent Night co-star, Lily-Rose Depp.

KEIRA KNIGHTLEY: Hey, Lily, how are you?

DEPP: Can you hear me?

KNIGHTLEY: I can hear you. Can you hear me?

DEPP: I can. Thank you so much for doing this.

KNIGHTLEY: I’m excited. Where are you?

DEPP: I’m in Paris. Where are you?

DEPP: Right across the pond.

KNIGHTLEY: I feel like I’ve been your stalker all morning, because I’ve been looking at loads of pictures of you.

KNIGHTLEY: It’s been a bit creepy, actually. My husband woke up this morning and I was already looking at pictures of you. And he’s like, “What the fuck are you doing?” I was looking at all of the work that you’ve been doing, and I think that your choices are super interesting. They’re weird and wonderful. And so I want to ask you, what’s your thought process when choosing roles?

DEPP: Weird and wonderful is definitely the direction I’m trying to go. I gravitate towards things that are a little bit outside of the box, or bordering on the strange. I fnd those projects to be the most creatively fulfilling because they allow you to enter into a different mindset.

KNIGHTLEY: There’s one that I think we’re meant to be talking about here, Wolf. I remember you were about to do it when we were filming. And I remember you coming back and being like, “I was in class to learn how to be a cat today.” And I was like, “Sure, of course you were.” So what the fuck is this film? It sounds amazing.

DEPP: We were supposed to shoot it a couple of weeks after we wrapped our film in March 2020, so obviously it didn’t happen right when it was supposed to. I was like, “I really hope that we end up getting to make this movie, because otherwise I will have been crawling around in my house like a maniac for months on end, for nothing.”

KNIGHTLEY: But what is it? I know that you were learning how to be a cat, but can you describe what the premise is?

DEPP: I hope I don’t butcher it, but it’s called Wolf and it follows a boy named Jacob, played by George MacKay, who believes that he is a wolf. So he goes to this treatment center for young adults who feel this way about different animals, and when he’s there he meets a wildcat, played by me, and they grow close. 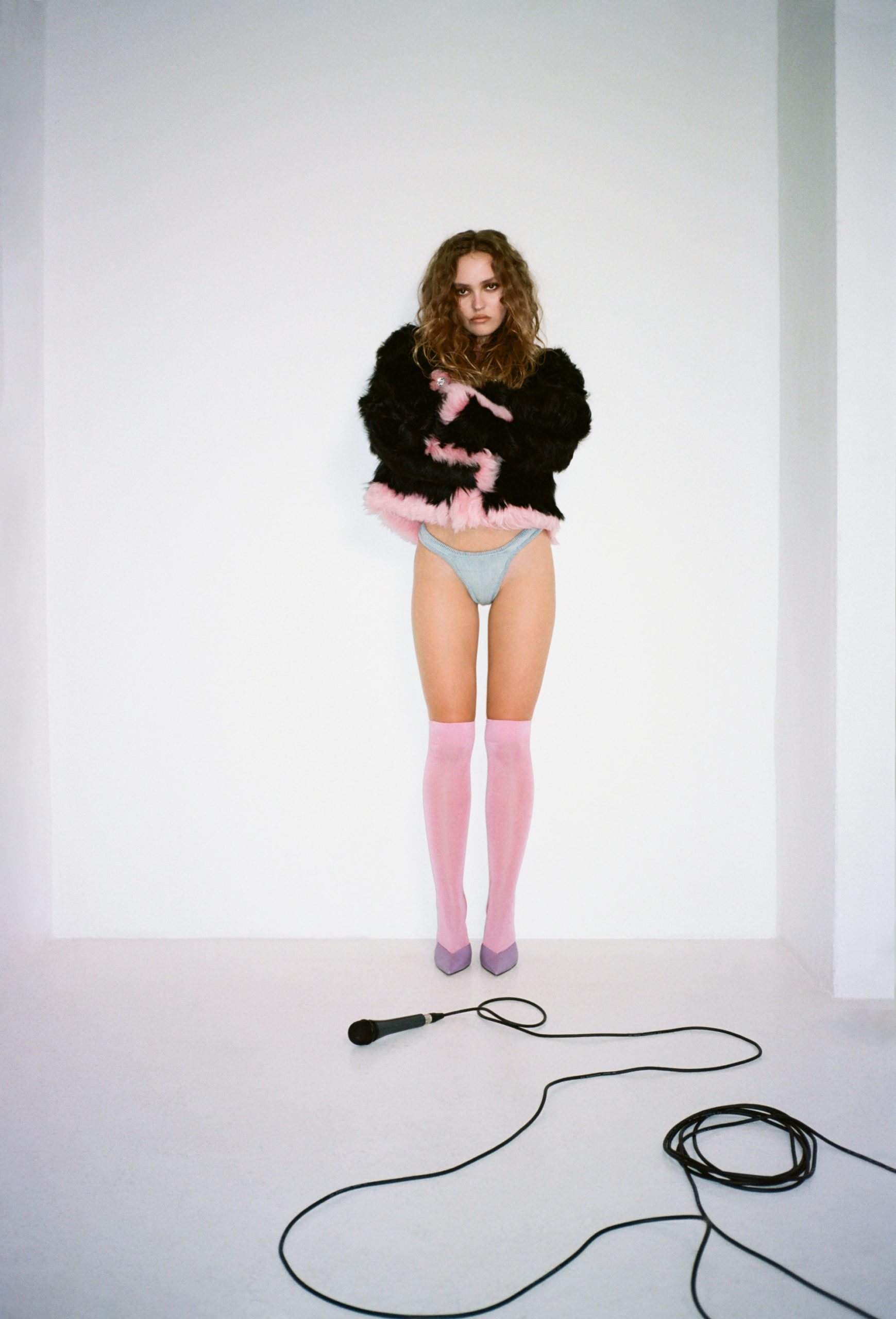 Jacket by Chanel. Panties by Isa Boulder. Socks by Falke. Shoes by The Attico.

KNIGHTLEY: What did you learn from this role that you can bring to others?

DEPP: It taught me how to angle my movements to any character that I’m playing, even if they’re as human as can be. You know this better than I do, but when you’re in character, it’s easy to fall back into your own mannerisms and the way that you sit in your own body.

KNIGHTLEY: We often forget to use our bodies because we work in close-ups. So it really struck me when you were doing it. Like, how interesting must it be to build a character when you’re really thinking about all of their physicality, in the way that a stage actor would, but that film actors often forget to do. Do you have acting coaches or did you go to drama school?

DEPP: I didn’t go to a drama school. In fact, when I did the movie Voyagers, I was so impressed and intimidated because almost all of the actors came from insanely prestigious, incredible theater schools. And I was like, “I have done none of this, and you guys are all so good.”

KNIGHTLEY: It’s funny, because you’re really having to learn as you go.

DEPP: Definitely, and managing on my own weird creative instincts. But I’ve started seeing a coach in New York, who’s incredible. She’s taught me a lot about working with your natural instincts and enhancing them with techniques that are really helpful and creatively fulfilling. Whenever I come out of a session with my coach, I feel like I’ve gone to therapy, because I feel so emotionally and creatively alive. Did you go to theater school?

KNIGHTLEY: I didn’t, but I’ve done a similar thing to you. I have a coach in London who I’ve worked with for 12 years. I get a lot of my stuff from her, a lot of stuff from movement people, and I just pick up stuff where I go. It’s a great way of doing it, but also quite a scary way of doing it.

DEPP: Something that Natalie Portman says in her MasterClass, which is incredible, is how everyone on set is a teacher, and that doesn’t just go for the people that are in front of or directly behind the camera. Every single person, every crew member, every cast member, is a potential teacher. And there’s no final product without every single moving piece to the puzzle. T-shirt Stylist’s Own. Pants by Loewe. Sunglasses by Bottega Veneta. Bracelet by Chanel.

KNIGHTLEY: It’s a lovely way to think about it. Do you ever suffer from anxiety on set or stage fright?

DEPP: Definitely. The peak of that is right before I start something. It’s possible for me to get in my head and be like, “Am I going to be able to do this? What have I signed up for? Are they sure that I’m the one?” Random things like that. But I always try to remind myself that if anything, it’s a sign that I’m invested and excited and wanting to do the best job possible. I would also be worried if I didn’t have that feeling. That’s just a normal human reaction. And trust is so huge. There’s so much to be said about feeling comfortable and connected with your partners, with your director, and with your crew members. And also, the hair and makeup trailer is the place where a lot of the emotion comes out, whether it’s before or after a scene. I feel like the hair and makeup trailer is such a sacred place.

KNIGHTLEY: Oh, it’s an utterly sacred place. It’s basically the best place on set. It’s like therapy and creation. Everything happens in the makeup trailer. I haven’t worked for over a year now, and that’s what I miss the most. That weird bit of preparation before you actually get on set. It’s why I really like wearing wigs when I’m playing a character, because the character can literally get put on me and then taken off at the end of the day. And I love that moment of seeing her come into being, when the hair goes on my head. That’s the coolest part of the day.

DEPP: It’s hard to say because I identify with both cultures equally. My dad is very American and my mom is very French, and I grew up in both places. I don’t know if I feel like I have different personalities. But I think that I’m able to tap into a more American sense of humor than a French sense of humor, depending on where I’m at. What I’ve heard, more than the personality thing, is that my voice is deeper in English and higher in French.

KNIGHTLEY: That’s funny, because I would think that it would be the other way around. But think about the question in terms of acting. Do you find it easier to access emotion in one language over the other?

DEPP: Honestly, it’s kind of the same to me because emotion is universal. It’s just about the character, the material, and how much you’re actually connecting with what you’re saying, or what your character’s feeling. 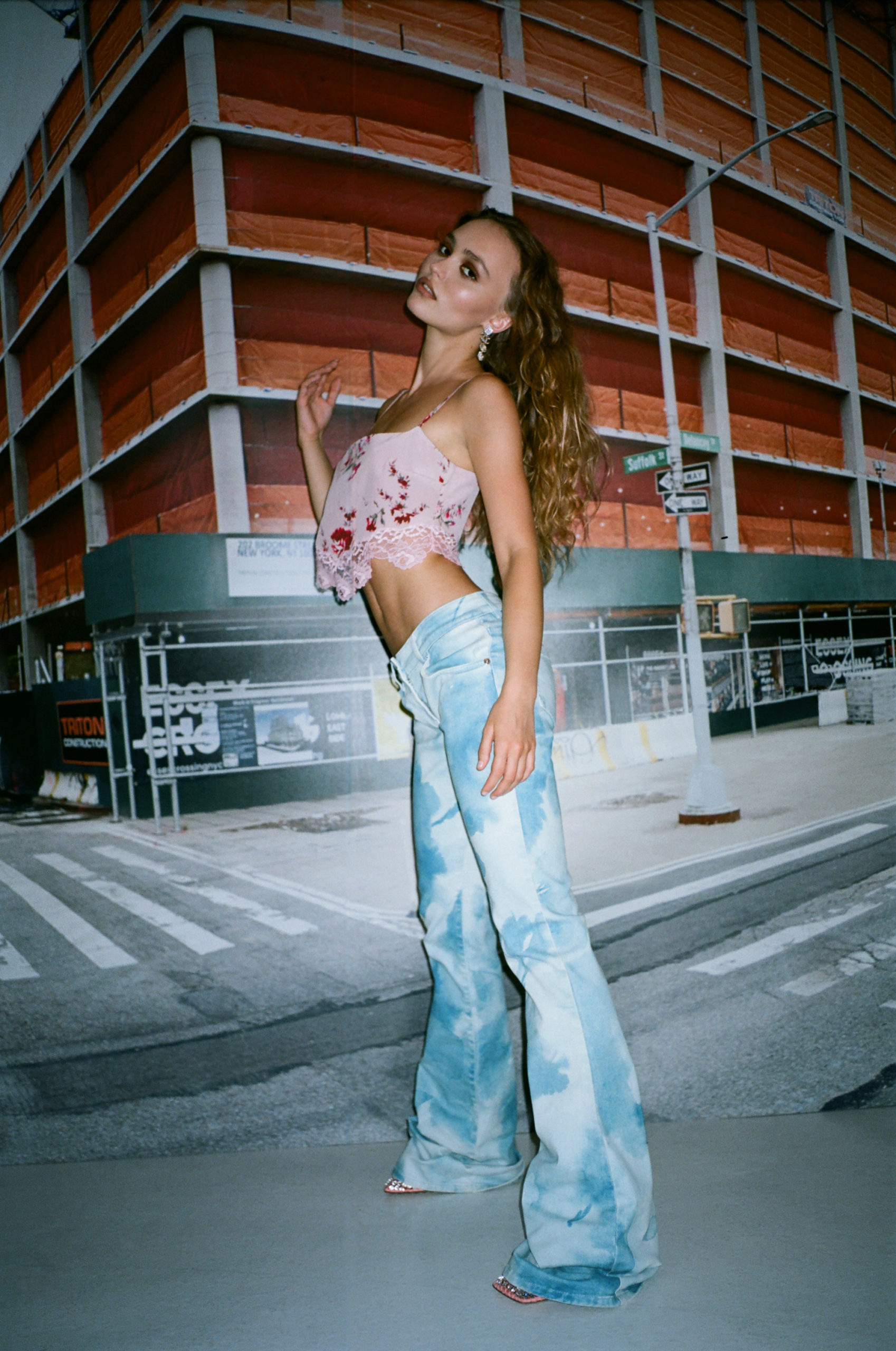 Top and Pants by Blumarine. Earrings by Chanel. Shoes by Bottega Veneta.

KNIGHTLEY: Do you prefer speaking one over the other?

DEPP: Both feel very natural to me in different ways. I speak exclusively French with my French family, and exclusively English with my American family. So I feel very at home in both of them. I’ve always spoken French with my mom. That was important to her, and it’s important to me. When I have kids one day, I will definitely want them to speak both French and English. And also, you can have a secret language with people. When my brother and I were at the same school, whenever we wanted to say something that was going to stay just between us, we could say it in French and nobody would understand.

KNIGHTLEY: You went to school in America, right?

DEPP: Yeah. My brother and I are three years apart, so there were moments where we overlapped at the same school. Not that he wanted anything to do with me. He was like, “Don’t even come talk to me with your friends.” And I was like, “You don’t want the cool older girls to come talk to you? What’s wrong with you? [Laughs] But we’re best buds now. Dress by Chloe. Hat and Belt by Chanel. Shoes by Crocs.

KNIGHTLEY: How old were you when you left school?

KNIGHTLEY: And is that because you wanted to act?

DEPP: Yeah. I’m unable to not immerse myself in something completely when I’m doing it, and I had already started working. I was so passionate about cinema and acting so I really wanted to pursue that, wholeheartedly. I have really strong gut instincts, and I felt like, “You know what? This is my moment to transition into the next phase of my life.” That doesn’t mean that I stopped learning. I’m always learning, reading, and educating myself.

KNIGHTLEY: Did you always know you wanted to act?

DEPP: I did. I was one of those kids that had five million things that I wanted to do. I was like, “I’m going to be a spy and a princess and a painter and a ballerina and an actor.” But what’s amazing is that I’m an actor, so I can do all of them for pretend.

KNIGHTLEY: Were you worried, because of who your mom and dad are, that you’d be judged differently?

DEPP: Of course. Those fears are—not fears, but those thoughts are totally normal. In those moments, I’ve had to remind myself that we’re all different people. I’m not the same kind of actor as my dad or my mom, and I’m very much my own person. So whenever I’ve had those moments, I’ve just had to think, like, obviously you’re an extension of your family in that they are so much a part of who you are, but that doesn’t mean you can’t become your own artist, or that your own art isn’t valuable on its own.

KNIGHTLEY: Well, that’s all right, my love. And I think on that note, we’ve done it.

DEPP: Yes we have. It was so nice talking to you.

KNIGHTLEY: It was so nice talking to you, and I really hope to see you at some point in the not-too-distant future.

DEPP: I can’t wait. And please send my love to your man and the girls.

KNIGHTLEY: You’re so sweet. Send my love to your mom and to all. Top and Skirt by Isabel Marant. Shoes by The Attico.