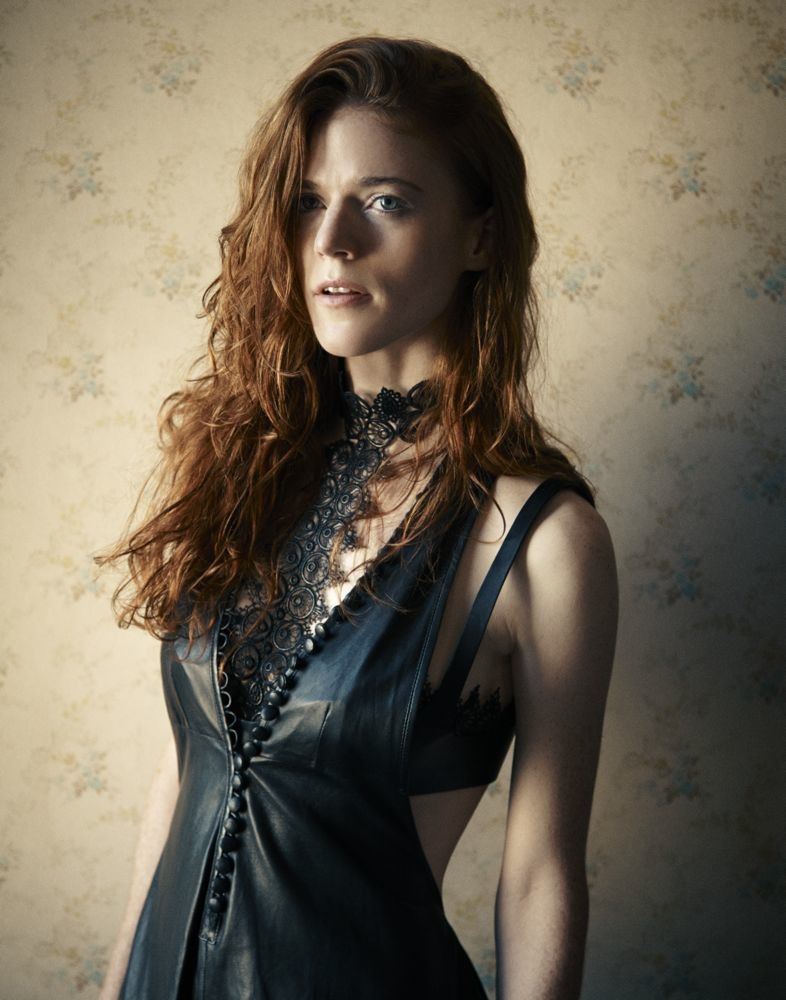 On Game of Thrones, HBO’s mammoth fantasy drama, Rose Leslie‘s feisty character Ygritte has the most quoted catchphrase of any character. Although she’s left the show, it hasn’t—and probably won’t ever—escape her. She’s good natured about it, and while promoting her new film The Last Witch Hunter at Comic-Con in New York earlier this month, she delivered it in Ygritte’s thick northern accent: “You know nothing Jon Snow.”

But Leslie isn’t a northerner. The 28-year-old actor was born and raised in Scotland, trained at LAMDA, and has an almost Queen’s-English accent. Although she’s easily recognized around the world as either Ygritte or Gwen Harding (née Dawson) from Downton Abbey, The Last Witch Hunter is her first American blockbuster. (She did a small indie thriller last year called Honeymoon that is worth watching.) “A movie of this scale has been a complete and utter education for me,” she explains. “You realize you are a tiny cog in a massive wheel, and there are so many different parts.”

The Last Witch Hunter is very much a comic-con film: action, fantasy, and Vin Diesel as the immortal, muscular, vaguely brooding hero. Following the death of their evil queen in the 13th century, witches now are integrated into society—some of them less happily so than others. Leslie plays a good witch, with Diesel as the titular hunter, Michael Caine as his confidante and aide—the equivalent of Batman’s Alfred—and Elijah Wood as Caine’s replacement. The cast spent five months filming in Pittsburg last year, and there were plenty of outings. “I wanted to make sure I didn’t leave before doing all three—ice hockey, baseball, and American football,” Leslie says.

Next up, Leslie will have a two-episode arc on Luther, the BBC procedural drama starring Idris Elba. She has two more films in the works: Morgan with Kate Mara and Boyd Holbrook, and Sticky Notes with Ray Liotta and Gina Rodriguez.

EMMA BROWN: There was this silly quote from Michael Caine about how he was quite confused when Vin Diesel approached him, because he wasn’t a very good driver. What was your reaction?

ROSE LESLIE: I was approached by [director] Breck [Eisner]. The script was sent through my agents and was rather wonderfully an offer, so then you go straight to that meeting on Skype with the director. I was kind of lured in by him. I was unaware that Vin Diesel was attached. I just loved the world in which this movie was set—this mythology of witches and humans living together and the idea that you’re unaware the coffee-man, who’s always selling you coffee, is a witch, or the butcher or the baker. That struck me as a rather fun premise to explore. Then of course I found out Vin was attached and I got to meet him several weeks later. I was flown out to L.A. and it was a very welcoming party. I went to his house and his family was there and there was music playing. It was a very warm reception.

BROWN: So you didn’t have to jump through any hoops—as long as you weren’t crazy when they met you, you had the part?

LESLIE: Yes. I’m sure Vin was vetting me when I was out there and you’re making sure that you give out a good impression, but it was very laidback. Obviously, there were cogs turning within his mind, but from my perspective, it was just a very nice meet and greet—make sure you don’t fall on your face as you walk through the door and come across as a clown.

BROWN: In the press notes, they talked about how everyone in the cast had experience with the fantasy genre; you were on Game of Thrones and Vin Diesel is really into Dungeons and Dragons. Do you feel you get approached for more fantasy roles since doing Game of Thrones?

LESLIE: I think so. That’s certainly a genre that a lot of people have seen me in, only because Thrones is kind of global. And I did approach this with a little bit of trepidation, because I do feel artistically to keep yourself invested and challenged you shouldn’t always repeat yourself. But I felt that it was an original. There were no books tying it down. It was a totally new idea. This alternate reality always interchanging from one to the other—from modern day to then Medieval—I thought was fresh enough to not always stand in the fantasy realm. We do escape it at times. It’s all about your choices and making sure you don’t fall into the same pitfalls.

BROWN: When you’re on the fence about a role, is there someone you talk to about whether or not you should take it?

LESLIE: Yes. I think that is the beauty of agents and managers, and that’s a wonderful dialogue to have with anyone that knows the world of film. But even with my parents, Mum is brilliant. Mum reads everything. She’ll say, “No, because that reminds me of this or that.” We have a good team—teamwork!

BROWN: Was she into film before? Or is it just because of your career?

LESLIE: Not necessarily. She’s been galvanized by the fact that I’ve been fortunate enough to have scripts come my way. She loves reading—she’s the most literate person I know and hugely bright, so it’s a wonderful thing to kind of lean on her. But I think she likes to take a more invested interest before.

BROWN: I was talking to the Welsh actor Craig Roberts, and he said that when he’s unsure of a project, he gives his grandmother a short synopsis to see if she thinks it sounds interesting.

LESLIE: That’s amazing. Unfortunately I don’t have my grandparents, but Mum and I are working quite well together. That’s candid, that’s frank. Your grandmother is never going to lie to you.

BROWN: When did you decide that you wanted to go to drama school?

LESLIE: I have two older siblings—I have an older brother and an older sister—and they had the time of their lives at university. They were at Newcastle and Edinburgh. Looking up to them the whole time, I wanted to go to university and live the life they were living, having a blast, and I didn’t get in. I didn’t get into any of the universities I wanted to go to. So wanting to study drama, I realized we had to think of another avenue, and that’s when I chose drama school. I was able to get into LAMDA and then those three years were just magic. And graduating at the age of 21 was a wonderful age to hopefully start a career.

BROWN: I was reading about some of the people who went to LAMDA. I didn’t realize John Lithgow went there.

LESLIE: I know! He was one of the first names we were told on our open day when the entire school was shoved into this theater. It was brilliant. I remember having watched Shrek then, and his voiceover is just superb.

BROWN: Actors often talk about English drama school are still very theater based, even though most graduates now go on to do at least some TV work. Did you find that?

LESLIE: We definitely dipped into television, but predominantly it was a focus on classical texts and on stage. Working on camera is a different ballgame in the sense that it’s far more intimate work, but the basics and the foundations of being able to create something that isn’t necessarily your own instincts—is a character that you have inside your head—whether you’re talking about television or film or theater, that still has to be the grounding work. I don’t really think it matters if you go into stage or TV as long as you do a bit of character work, really.

BROWN: So you didn’t have that moment of being on set for the first time and not knowing what any of the terminology meant?

LESLIE: Definitely! But I was taken in by very lovely people and it was all quite lovey-dovey. It was a BBC gig in Edinburgh, and I had the most wonderful director and she was very, very attentive and made sure that you felt confident and knew what you were doing. She was aware that it was my first-ever television gig, so any kind of questions of “rolling” and “turning”—I think I knew what “action” meant—but the lead up to everything happening, I was kind of carried along. I was really lucky in that respect. With big productions, you can sometimes get lost with the terminology and all the different departments.

BROWN: Do you remember your first professional audition?

LESLIE: I do. It was for the gig I mentioned earlier in Edinburgh. That was for a project called New Town (2009). I was still at drama school and I went out for a young Scottish girl with a big ginger afro back-brushed all the way up to here. Having asked the advice of one of my drama teachers, they told me to go in with a Scottish accent. I naturally don’t have one, obviously, and so I went in pretending I was Scottish and it was the most terrifying thing.

BROWN: But you are Scottish.

LESLIE: I am, I just don’t have a Scottish accent. I think I did have one when I was younger. I lost it. I grew out of it. Super subconsciously, it made me feel like less of a fraud, but no less terrifying. Going into auditions there is a wonderful butterfly feeling in your stomach—an equal balance of being utterly terrified and exhilarated that this is your chance. If it’s a passion project; something that I have read and I love the storyline and the character I’m going up for, that almost makes it worse, because there is that desperation within you and sometimes it makes you act in weird ways.

BROWN: Out of the stuff that you’ve done, what was something that you were particularly passionate about and really wanted to get?

LESLIE: I have always been a big fan of the BBC program Luther with Idris Elba. And I was able to work on Season Four earlier this year, with pretty much exactly the same team from the beginning—Sam Miller directing these two episodes that will be coming out in December. I remember watching Luther in 2010 and it was so compelling and gritty and edgy, and for me it was fresh and something new—particularly with Idris’s style of acting, it just pulls you in. And I’m enamored with that man. I think he’s an utter genius.

BROWN: Had you known him just from Luther, or were you a Wire fan as well?

LESLIE: I was a Wire fan, so I was aware of Stringer. But not on our television screens back in the U.K.—BBC One on a Sunday night. That was the first time I felt like he was home. London looks majestic in that program. So certainly watching it in London for all of those years, I felt that I had an affiliation with John Luther, I was like: “Man, I’m on this ride with you. Let’s go! Let’s kill it!” That was very fun.

BROWN: Do you ever get nervous when you meet people like Idris whom you’ve been watching for years?

LESLIE: I did with Idris. You always try to play it off cool, but even if I think I have a certain laidback body language when I’m meeting someone who I greatly admire, I still have this horrible tendency to go bright red. Meeting him and shaking his hand, I turned into a radish. It’s the hugest giveaway that I’m trembling inside.