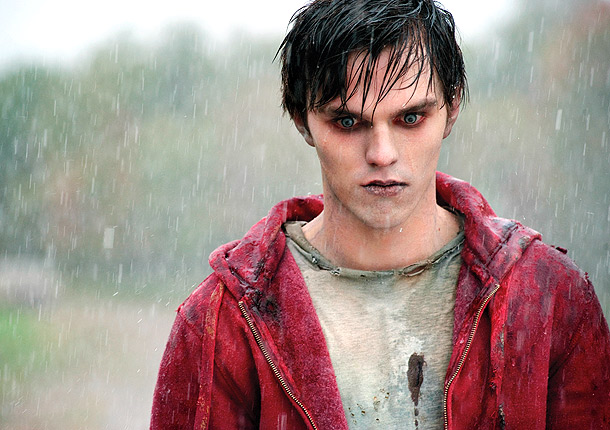 ABOVE: NICHOLAS HOULT IN WARM BODIES.

If you’re not sure why Nicholas Hoult looks familiar, odds are you might need to think a little further back—11 years, to be precise, to Hoult’s memorably adorable turn opposite Hugh Grant in 2002’s About A Boy. The young actor then caught another wave of notability playing up growing pains in the edgy UK teen series Skins. Since then, Hoult has ridden an undercurrent in American cinema, playing small but brassy roles in Clash of The Titans and X-Men: First Class. Hoult’s latest role, as the sentimental zombie R in the genre-bending new film Warm Bodies, will surely see him stagger his way into the hearts of tweens (and, okay, maybe some 20somethings) the nation over.

Spinning the old theme of the typical Romeo and Juliet love story with a refreshing, zombified twist, Warm Bodies exudes the kind of young, quick-witted, and often humorous attittude most zombie films are missing. Hoult is introduced as a zombie staggering around in an abandoned airport amidst an apocalyptic world, hilariously exchanging grunts with his compatriots while a running commentary spins in his head. Then he meets Julie (Teresa Palmer) after saving her from a zombie attack, and finally finds someone worth connecting to. From there the film picks up, and Hoult transcends the genre’s confinements with every awkward movement, for a perfect mix of sentimentality and humor.

Nicholas Hoult sat down with Interview to talk about that awkwardness, his zombie inspirations, and more.

NIKI CRUZ: You joined Twitter this week. Were you aware that there were five of you already on there?

NICHOLAS HOULT: You know what? [laughs] That was actually part of the reason of doing it, is to try to stop people from faking me. People kept on telling me that people were kind of making me look a bit stupid on it. So I decided that maybe it was safer to have my own. It’s such a strange thing to do, and I don’t know how much spare time you have to do that, or what goes on in your head to decide that’s what you want to do, but it’s very odd.

CRUZ: Have you gotten the hang of it yet?

CRUZ: Warm Bodies plays against the convention of the zombie genre by focusing on the power of the human connection. Was that something that appealed to you?

HOULT: Yeah, completely. I think it’s the fact that the script was offbeat and kind of an odd blend of genre, and it didn’t take itself too seriously. It was funny, but it also had a lot of heart in it. Also it’s that thing about two people connecting against the odds and seeing the best in each other. I thought it had a nice message. Jonathan Levine is such a talented director; I thought he would make a cool movie.

CRUZ: Are you a fan of the zombie genre? Did you look at any recent films like Zombieland before you took the role on?

HOULT: Yeah, we did. We watched a lot of them. We saw Dawn of The Dead, Night of The Living Dead, Return of The Evil Dead, and all those. Also, Shaun of The Dead, and Zombieland as well. Those two films push the genre a little bit in a more comedic way. Those are closer to the tone of our film.

CRUZ: What specifically did you pick up as far as the comedic timing? It’s not a film that has a setup and punch line. It’s pretty natural.

HOULT: With the comedy in this film, the tricky thing was not playing for laughs. It kind of happened naturally. Jonathan wanted the film to be grounded in reality as best as possible even though it was kind of a strange concept, I guess.

CRUZ: Did you read the book Warm Bodies is based on, to help you prep for R?

HOULT: I did, yeah. The book really goes into more of the detail of his feelings and his thoughts, and it got me into a good headspace. The script kind of had everything that we needed in it. It was really well adapted by Jonathan, but the book was kind of little bit of something else to have in you as far as having knowledge going into it. It helped with the internal feelings, and feeling trapped, wanting to connect with everything around you, and feeling lost. Also, it was knowing that there was something more in life.

CRUZ: It would seem frustrating to play a character that is stuck in his own head with all of these emotions going on inside of him. Was that difficult for you?

HOULT: Yeah, being a repressed British man, that’s kind of our whole thing, isn’t it? [laughs] We’re mostly stunted, I guess. No, that was the fascinating thing about the film, is that he’s really trying to do his best. That’s what Teresa’s character, I think, finds a sort of redeeming quality about him. Even though he’s unconventional and it’s hard to talk, and not the sort of guy she should like, she sees that he’s trying, and that’s the most important thing.

CRUZ: As a young adult, how was it to delve back into that awkward state of adolescence?

HOULT: Oh, I’m still very awkward anyway, so it wasn’t that hard to tap in, to be honest with you. [laughs]

CRUZ: We see R in the beginning, as someone’s who’s trapped and aimlessly roaming about an airport. How did you get into that mindset? Did the zombie movement help you with that?

HOULT: Yeah, the zombie movement had a kind of vacant stare and stuff. Luckily the costume, the makeup, and the set decoration was so brilliant, once all of those things combined it was very easy to get into character on set. For the movement, Jonathan wanted me to move like a zombie, but not too much where it kind of became distracting and caricature-like. It was also a really great atmosphere on set, with the crew, and people that really cared about the film. We had fun and I enjoyed going to work each day, which I think you can tell that when you see the film.

CRUZ: Speaking of the costume, those contacts were pretty jarring. How was it to wear those and not blink while filming?

HOULT: [laughs] Yeah that was a stupid decision! Yeah, deciding not to blink, I guess it was one of those things where we were like, “Yeah, zombies don’t really blink, right? Why would they do that?” So the contacts actually helped with that. Being behind lenses it did kind of make me feel like I was stuck in my own head a bit.

CRUZ: Although your zombie isn’t typical, if the inevitable zombie invasion happened, would you be prepared now?

HOULT: [laughs] I’ve gotten asked this a few times, and I have different responses depending on the day and how I’m feeling. One time I said I would scream like a little girl, and hide. Then maybe try to blend in with the zombies. I’ve had a bit of practice now! Maybe I would try to blend in and do an undercover zombie. We’ll wait and see! That day will come.

HOULT: Who knows how we’ll react?

CRUZ: John Malkovich is a pretty funny guy, although he plays straight in this film. How was it working with him?

HOULT: He was phenomenal. He would be very relaxed, and very calm on set, and a great person to have around. He’d sit down and I’d be like, “Wow, that’s John Malkovich, and he’s awesome.”

CRUZ: And he’s shooting at you!

HOULT: And he’s shooting at me! Ah! So cool.

CRUZ: The setup of R gaining all of these memories by eating brains was a new perspective on why zombies devour brains. It was a great alternative.

HOULT: Yeah, I thought it was a nice addition to explain why a zombie eats brains. So far, I think the zombie fans have really taken to that concept that brains are particularly delectable because of the memories and the feelings it gives you.

CRUZ: Hypothetically speaking, if you had to take a look into someone else’s memory, who would it be?

HOULT: Oh, you know what? I’ll go with Freddie Mercury. I just think he was a really talented guy. It would be intriguing to see. Everyone wants to be a rock star as well. That would be cool.

CRUZ: With Warm Bodies and later on Mad Max, and Jack The Giant Slayer, do you feel like this is a new stage in your career?

HOULT: I don’t know. Maybe. So far I’ve been fortunate to be able to do quite an eclectic mix of things, and have worked with good people. I’m enjoying it. I really like to mix it up. There’s nothing better than doing big action-y stuff, like Mad Max and Jack The Giant Slayer. It’s like you’re a big kid. You run around on set and you get to do stuff that you did in the garden when you were five years old. I enjoy doing the smaller, more personal works as well, the character-driven stuff.

CRUZ: Do you ever worry about being over-exposed?

HOULT: I don’t think anyone knows who I am, so I’m not too worried about that at the moment. [laughs] There’s something to say for not working for the sake of it, and trying to do things that you want to see. I guess as people get more fans, then they have to be more respectful to the fact that people are going to see the films, and that they’re giving the fans a good show for their money. But no, should I be worried?

CRUZ: I don’t think so. If anything it opens a wider audience to see the quality films you’re interested in making.

WARM BODIES IS OUT NOW.