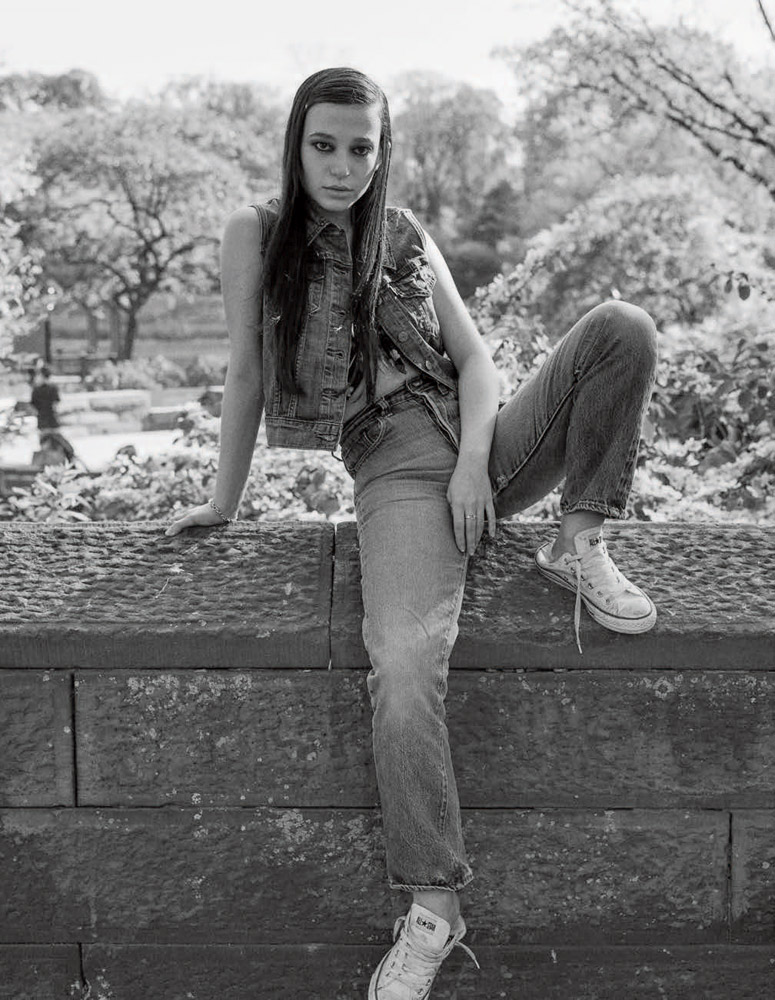 BREAKOUT ROLE: As Pamela Adlon’s daughter in the Adlon and and Louis C.K.-scripted FX dramedy Better Things, back this fall for season two.

GROWING UP: My parents are psychologists. My father is a specialist with schizophrenia and my mother works with mostly children. I have four siblings, two older sisters and two brothers. One of them is my twin. I’m the only actor in the family. My little brother does Parkour. My sister married a writer, so I think that’s what sparked my interest in acting. I’ve always been a huge film buff and so is my father, so I grew up watching all the Woody Allen films and Tarantino, Sofia Coppola, Scorsese.

BEGINNINGS: I was just painfully shy. I couldn’t talk to anyone. Going up in front of class, I would have to mentally prepare myself to raise my hand. That was even just a couple years ago. I was a competitive horseback rider, and all of a sudden I just decided, “I think I want to be an actor.” I know this is cheesy, but I saw The Hunger Games and I was like, “That’s so cool. I want to do what she’s doing.”

GOING OUT FOR BETTER THINGS: I got the audition, and this was kind of the end of pilot season. I wasn’t getting anything. I felt such a connection to this script and immediately felt very protective over the character because she’s so multifaceted and interesting and she has so many colors to her. I wanted to do her justice. So I went in and the first read was great. I went in a couple weeks later to meet Pamela and it was instant chemistry. I immediately fell in love with her. Then, a little bit later, she called me and asked me if I wanted to be in the show, like, in her voice. That was a really exciting day.

[My parents were] very excited. My brothers were like, “Oh, cool. Now watch me do this Parkour thing.” Louis and Pamela are amazing. I had seen some of Louie, and then when I auditioned and was going to go in for the chemistry read, I watched every single season with my dad.

CHOOSING ROLES: I’m just a sucker for a good script and people that are passionate about it. I love independents. I would like to play all different kinds of characters. Now is a time where there are so many more opportunities for women in this industry. I think it can still be better, but the characters that I have played so far have had great writing for women.

GETTING INTO CHARACTER: My parents being psychologists, I’ve grown up really understanding people and why they do things and why they don’t do things. I think that’s helped me to a certain degree because they’ve taught me to be people-savvy, in a way.

I mean, my parents don’t psychoanalyze me all the time, or maybe I just am used to it. I don’t know. [laughs] We’ve all grown up being very in touch with our emotions. When I was younger and I was feeling something and I didn’t know what it was, my mom was like, “Okay, what are you feeling? What are you feeling right now? Are you sad? Are you happy? Why are you sad? Why are you laughing right now?” and so I think that’s helped me a lot with character work.

BIGGEST VICES: Shopping. Even though I get everything at thrift stores, every single flea market I’ll go and buy things that I completely don’t need. Last time I was there, I bought ten crystals. The guy told me they had magic powers. I think it’s so ridiculous. I got this ring; it’s a black widow. I bring it everywhere because it intimidates boys.

Every time someone’s like, “Oh, what is that?” I tell a boy, “You know, a black widow, after they have babies they kill and eat their husbands.” I think that’s so dope.

ROLE MODELS: Pamela is a huge role model of mine. I think Sofia Coppola is a goddess. I think the characters Holly Hunter and Laura Dern play are so vulnerable and raw. Those are two actresses that I really admire. I love women who know who they are and what they’re about. Pamela gave me advice and she said, “Don’t take yourself too seriously,” which I think has helped me so much, because in this industry, being a kid you try to be very serious and professional because you’re with all these adults, but you also have to remember you’re a kid and it’s just acting. It’s nothing more. So, I think about that every day.

DREAM DATE: I want to go on a date with Whoopi Goldberg. I want to pick her brain. I want to hold hands with her and walk down a beach and talk about life.

WHAT’S NEXT: I’m always looking ahead. Working makes me happy. I want to keep working, and when I’m not working, life is pretty slow and I’m like, “When’s my next job?” The most important thing for me is picking characters that I like and being in projects that I feel have a lot of integrity.