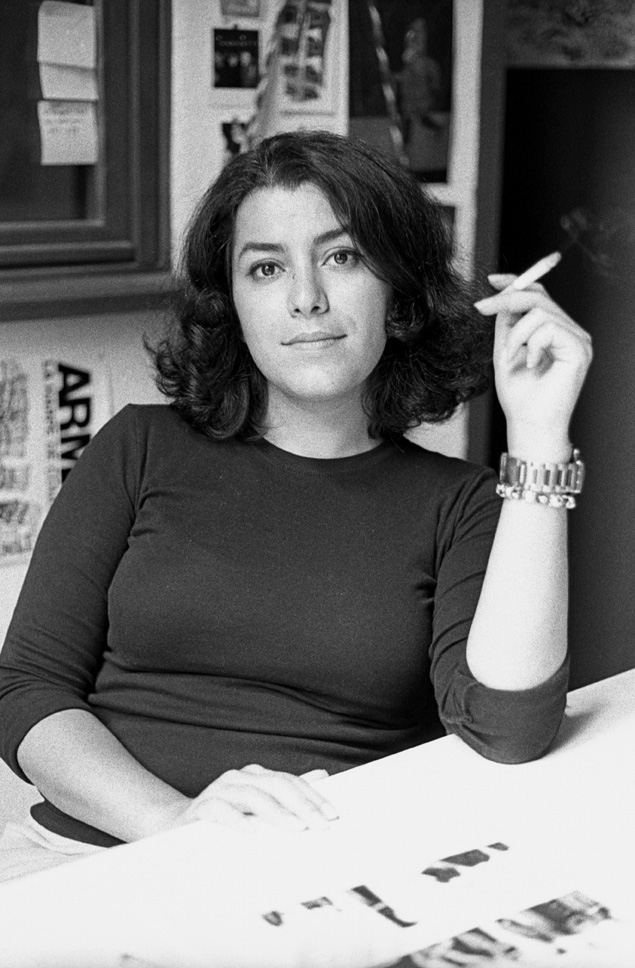 For those who know it, the name “Marjane Satrapi” evokes vivid cartoon illustrations arranged in panels—crisp line drawings that tell a world of different stories sharing a common backdrop: Iran, her native country. Now located in France, Satrapi forced her way into the public consciousness with Persepolis, a moving graphic memoir that detailed her experiences growing up in the wake of 1979’s Iranian Revolution; in 2007, she and fellow illustrator Vincent Parronaud adapted it into an Oscar-nominated film featuring the same artwork for which she is known.

But with the release of Chicken with Plums, her second film with Parronaud, the world will be treated to a new dimension of Satrapi’s repertoire. With Plums, itself based on another graphic novel of hers, Satrapi ventures into live action. The author and director conjures such a visually provocative, whimsical story of life, love, and loss that one wonders whether perhaps we had it wrong all along: whether animation might just be the cinematic medium best suited to realism after all, and live action to whimsy. During her recent trip to LA, Satrapi spoke to Interview about Plums, Persepolis, and the directorial majesty of Michael Powell.

KEELY WEISS: Hi, Marjane, how are you?

MARJANE SATRAPI: Very fine, Keely. I just came into LA yesterday and I’m completely jet-lagged and I woke up at four and I was in the swimming pool at five in the morning, so I’m a little bit upside down, but I still have all my wits.

WEISS: Well, that’s what matters. I found it interesting that you chose to direct Chicken with Plums in live action when it seemed like animation might have been a more natural choice.

SATRAPI: Well, I’m not an animator. I made one film in animation, and the reason was because I thought it was the most appropriate form for Persepolis. Given the specific story of Persepolis, which had to do with the modern history of Iran, I think if I put it in a geographical place with some type of human being people would say, “Oh, this is a story of this third-world people, they’re far from us, we don’t get it,” and I thought there was something about the structure of the drawing that meant anyone could identify with it. For the second film, I thought it was universal just because it was a love story, and I also wanted a new experience and that was it. I never wanted to become an animator for the rest of my life; for me, animation is just one way of making the cinema, and I thought that it was appropriate for Persepolis but not Chicken with Plums.

WEISS: Right. That said, you’re a graphic novelist, so you illustrate your own work, and you’re such a visual person. Even this film is very visual.

SATRAPI: Absolutely. That is the thing: I illustrate, of course, and since I draw my visual style is not the same at all as that of somebody that does not draw. Of course it’s very visual, you’re completely right.

WEISS: What was your thought process in going into the visual design?

SATRAPI: When you make a movie like that, if you are not surrounded by people who are over-talented, it will not be a success, so first of all, I had the luck to work with an incredible set designer who really understood the spirit of the film. Then the cinematographer was great, and he did a lot of work to try to figure out how to make the transition between one visual style and another, because the challenge with this movie was that it could very easily look like a patchwork and we didn’t want that. We wanted the transitions to be smooth. You know, when you make a film it’s a question of taste, and I was so impressed with the films of Hitchcock, of Michael Powell—where, you know the sets are false, but the second you understand that you are in the fantastic world of Mr. Powell [and] you get to take a trip for one and a half or two hours, which is what I wanted to make myself.

WEISS: Well, I think it’s an incredibly beautiful film, and you have a fantastic cast. Did the success of Persepolis make it easier to facilitate the kinds of collaborations you wanted to do?

SATRAPI: Of course. I mean, when people see your film or read your books or whatever, they know what you have and it’s much easier. The cast was incredible, and the most incredible was that all my first choices, they said yes. All of them! At the time I asked Matthieu Almaric, he didn’t want to act anymore because he had other projects as a film director, but the guy was in love with the book Chicken with Plums and he said, “Oh, I don’t want to act anymore, but how do you want me to refuse a project like that?” So it was incredible that all the people that were my first choices, they all said yes.

WEISS: Chiara Mastroianni was stunning as the adult version of Lilli in the flash-forward.

SATRAPI: She was breathtaking, and she made me shake so much because she was my voice in Persepolis and she was like, “Oh, my role is too small! Why do I have so many days of shooting?” and I was like, “Chiara, everybody will remember you, because you have a beautiful role.” But at the end she was happy, and she was perfect for Lilli. I could not imagine another woman playing that role.

WEISS: This is also different from Persepolis in that this film wasn’t autobiographical, so I imagine that felt different as well.

SATRAPI: Well, on an emotional level, it’s much easier for me. The only true thing is that my mother had an uncle who was a musician and a great one; this is it. The rest had a lot to do with my own experiences and things I have heard or seen myself, but you don’t have this thing where it’s you and you’re exposing yourself to the world. The other thing is that animation is a very long procedure, which has its pluses, because if you don’t like something you can change it, but it has the minus that it’s extremely, extremely long, it takes forever. Making this film was good because I didn’t have all this emotional weight on my shoulders, and at the same time I really had to be very speedy because we only had a certain number of days of shooting. But in a way, I love to work with that stress because my brain actually functions much better.

CHICKEN WITH PLUMS IS OUT TODAY IN LIMITED RELEASE.