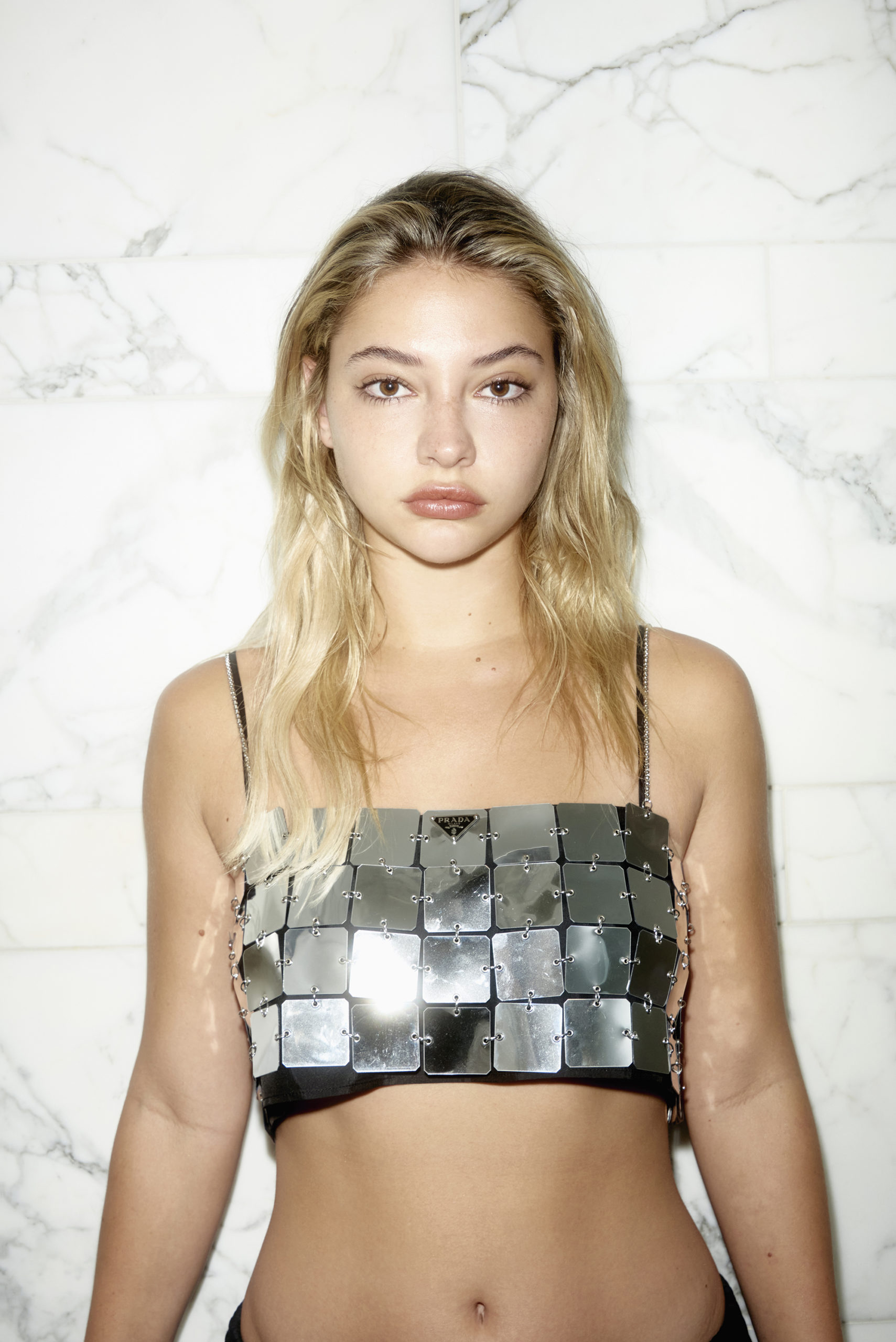 Top and Skirt by Prada.

From a London hotel room, the Outer Banks stunner goes one-on-one with her costar in the hotly anticipated sequel Glass Onion: A Knives Out Mystery. It cuts glass.

HAHN: How would you serve a glass onion?

CLINE: On the rocks, shaken, not stirred.

HAHN: Mmm. Right into Daniel Craig [the star of Glass Onion: A Knives Out Mystery].

CLINE: With jazz music playing and tap shoes on. [Laughs]

HAHN: His favorite two things, we found out, while working with him. What are the knives out for exactly?

CLINE: I mean, anything really. Dinner, onions, cutting them. CLINE: Very hard, but easy to shatter one, I would imagine.

HAHN: Let me rephrase. Who would your knives be out for?

CLINE: My knife would probably be out for Miles.

HAHN: Okay. For our readers, Miles is a character that is in Glass Onion: A Knives Out Mystery. It’s going to be on Netflix this Christmas.

HAHN: And starring, among others, this amazing angel, miracle human that is in front of me right now.

HAHN: Who I just had the honor of working with. It is no joke that Madelyn Cline could be also, syllable-wise, confused with Madeline Kahn.

HAHN: And I am so delighted I had the pleasure of witnessing her performance. I just love her as a human on every level.

CLINE: I love you very much, deeply, truly, madly. Do you want to know a quote that I read today that I really loved?

HAHN: I’m taking this in right now and my mind is having a hard time following the logic, but I’m with you.

CLINE: I just had to share it with you.

HAHN: Okay. When you watched the first Knives Out, was there any part of you that thought, “One day, I could be in a world like this, but with none of these actors, except for Daniel Craig.”

HAHN: Yeah, me neither.

CLINE: However, I do remember getting all of the Deadline notifications on my phone and I kept seeing Janelle Monáe, Kathryn Hahn, Kate Hudson, and I was like, “Holy shit.” At this point, if you’re not cast in this movie, it’s your own goddamn fault. [Laughs] Sorry, I cursed.

HAHN: How dare you? I’m a mother of two. How did this film come to you or how did you come to it?

CLINE: Oh, by email. [Laughs] And an audition and a tape. Top by Andreādamo. Shorts and Leg Warmers by Hermès.

HAHN: Was it a Zoom?

CLINE: Yes, they were all Zooms. I never met with anyone in person.

HAHN: Yeah, me neither.

CLINE: It was so bizarre. I had my first actual in-person audition recently. It was so weird and uncomfortable and I didn’t know what to do with my hands.

HAHN: Right. The Zoom did kind of start to help.

HAHN: Just sweatpants or who cares down there?

HAHN: Okay, we shot this movie in Greece. Does it live up to the hype?

CLINE: Absolutely. You should go to the islands that are not like the Santorini and the Mykonos of it all.

CLINE: Do go, but also don’t. I don’t want to blow up the spot, but I want to go back. I liked how low-key it was.

HAHN: I’d never been before. And the fact that we were able to go to these very lo-fi islands, where a lot of Grecians actually vacation themselves.

CLINE: I remember the day we were on the Aquarius, the yacht, and we were just all sitting or standing on the balconies like children, watching these dolphins.

HAHN: There was a lot of childlike wonder and awe in the making of this film.

HAHN: I felt like I was in a theater ensemble.

HAHN: We all had meals together every single day. We just loved being together.

CLINE: It was so magical. Daniel knew exactly what he was doing when he threw that dinner party, the first one. I think about it so fondly.

HAHN: During the postproduction I remember Rian [Johnson, director of Glass Onion: A Knives Out Mystery] saying, “You want to cut back to Madelyn all the time because her subtle reactions are consistently hilarious.” I’m so excited for the planet to see you in this movie.

CLINE: Everybody was just delicious to watch. Top and Belt by Louis Vuitton. Underwear by Sunspel. Shoes by Courrèges.

HAHN: Let me see if I have any other delicious questions underneath my ruined page.

CLINE: I love how offensive the flavor is.

HAHN: What if we all just come to the premiere with onion breath? We can just toss onions into the audience, as souvenirs.

CLINE: Signed onions. Put them in your fridge.

HAHN: How would you feel about meeting your character in real life?

CLINE: I feel like I met her in real life so many times.

CLINE: And Coachella. I’ve never been, but like 2016 Coachella. HAHN: Your portrayal of Whiskey [Cline’s character in Glass Onion: A Knives Out Mystery] is so heartbreaking because it could be just one thing, but you add so much depth to this person. And I’m sure that’s why Rian was so excited about you playing her. She really is felt from all different sides, and that’s what makes her so—I keep using the word delicious—to watch. You really see so many different sides and layers of her, the glass onion that is Whiskey.

HAHN: For sure. So with that said, tell me about your Netflix show Outer Banks. What’s going on there?

HAHN: And congratulations on all of the success there. Because clearly, there’s a huge following.

HAHN: I am not with the times.

HAHN: I’ve come from a time capsule with my Filofax and my pages and my pen to ask you questions about their future.

CLINE: And your glasses.

HAHN: But the kids tell me that everybody loves it and I have to watch it.

CLINE: It’s okay. Sometimes I don’t even watch it.

HAHN: Some people don’t love watching their own work.

CLINE: I get very sweaty. It’s a fun show, we have a good time shooting it. It is very physically demanding and emotionally taxing, but— Jacket by Tod’s. Bodysuit Stylist’s Own. Earrings (held in hand) by Jacquemus. Shoes by Miu Miu.