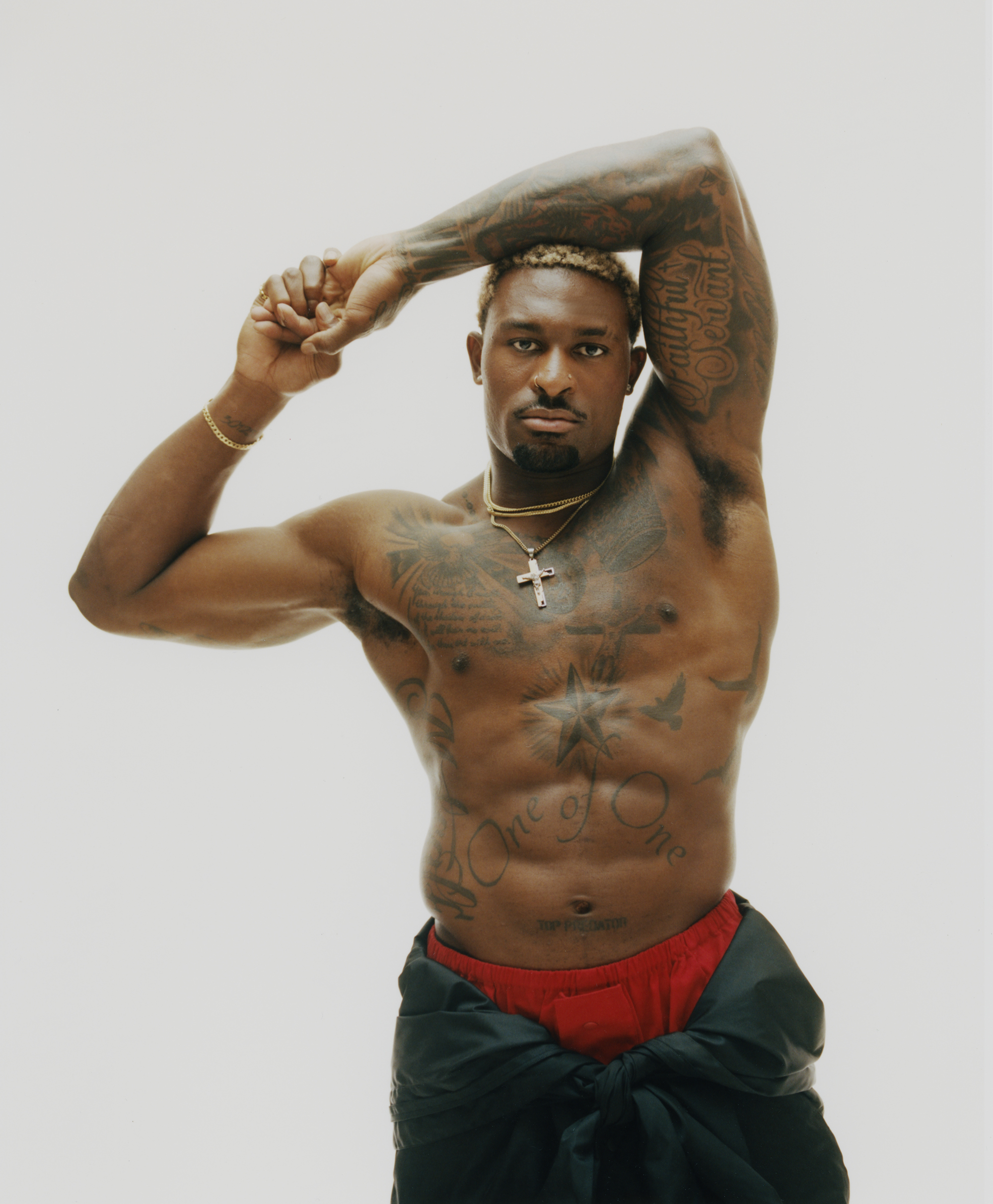 DK Metcalf is a total stud. In his short career, the Seattle Seahawks wide receiver has become one of the most unstoppable forces in the NFL, a monster in cleats who blows by opponents with super speed and scores touchdowns like they’re free. Off the field, the Oxford, Mississippi native is gunning to become an industry unto himself, something his friend, the Outer Banks star Chase Stokes, can totally get behind.

DK METCALF: What up little-head–ass boy.

STOKES: What’s going on with you?

STOKES: Good. I’m just out here working my damn ass off, trying to make time for you. You know how it goes.

STOKES: Nah, seriously, we just finished a scene. I got like 25 minutes till we get the next set up, but I do have questions for you.

METCALF: Alright bet, and I appreciate you for taking the time out your busy-ass schedule.

STOKES: Oh, you know how it goes. So you’re living the American Dream right now. Well, realistically it’s sort of a global dream, being a professional athlete. What are some key points that you could attribute to your success? Not just on the field, but off the field as well?

METCALF: Some key points that brought me to who I am today is just being different and working hard at everything that I did, and not just following the crowd. I wanted to be different. A very small percent of the world gets to play in the NFL and I know that percentage is drastically different from everybody else walking around. So just being different, being my own person, I attribute it to that.

STOKES: Got it. Very true. So the next question would be, I know for me, I’m forever indebted to my mom. She made a ton of sacrifices in my life. Going back to school when I was in high school, we had a roof over our head and she paid the bills. So, who’s a person or persons that you would say have impacted your life?

METCALF: I’m going to get long-winded with this one. It took a village to raise me and for me to get to where I am. So of course my parents, my siblings, for holding me down and keeping me humble. But also, my teachers, my coaches in every sport that I played in high school and middle school, the family members that made sacrifices to make sure that even if my parents couldn’t be there, that somebody was there to watch me at the game. It wasn’t a big deal for me at the time, but looking back, having that support meant a lot, because a lot of kids’ parents or family members couldn’t be there. And then the city of Oxford, Mississippi, where I was born and raised.

STOKES: Love that. So I’m going to get down to a little bit of the nitty gritty. I know that for us, on Outer Banks, we’ve got a group chat and it gets a little wild in there sometimes. What’s the culture like in the NFL? What’s the group chat like for you guys? You guys got a similar thing with the team?

METCALF: Not a team group chat. We have a receiver group chat and it gets pretty dirty in there. I’m going to leave it at that.

STOKES: Speaking of dirty, I know you got a horrible diet. So beyond just the normal candy bowl that sits in your kitchen—

METCALF: Hey man, get out of my house. [Laughs] My diet ain’t even that bad. Yeah I splurge with some candy every now and again, but I’ve pretty much changed up my diet this off-season. In the past month, I’ve barely eaten candy. I’ve been cleaning up my diet, eating more organic.

METCALF: Yeah, locally grown food and produce. So my diet has changed drastically from where it has been and what I broadcasted because I just wanted to take a chance and see how good I could be.

STOKES: Well, I’m going to miss that candy bowl if I’m being honest. I got a question for you and it sort of aligns with my world. I went through my own version of body dysmorphia after the show came out and people were saying this and that, having their own opinion on things. I remember when you were coming up out of college, there was a lot of attention on your physique. How did that affect you mentally? Was it something that bothered you or was it something that pushed you in a different direction?

METCALF: I didn’t let it get to me that much because I knew who I was as a person and I knew I had goals and that nobody could help me get there but myself. But I will say, with that attention, I had to hone it in and at the end of the day remember whoI was as a person, as a football player, and that I wasn’t going to let the outside world define me as a player or as a person, or tell me that I was just a bodybuilder playing football. I continued to work on my craft and not prove the doubters wrong, but prove myself right.

STOKES: Cool. So as a man of faith, I know you’re a man of faith as well. What keeps you going? And when you’re traveling, how do you stay connected to the big man upstairs?

METCALF: Coming out of college, I had a real bad neck injury. So me just having the second chance at the sport and at life, it’s what keeps me going. That’s what keeps me smiling on a day-to-day basis because I know what it’s felt like to not have football in my life. I let that drive me and let my light shine. I know I’m destined for greatness. I know I’m destined for more than just football.

STOKES: Alright, alright. So pregame fits. I know you’re big into fashion. What goes into choosing the outfit on game day?

METCALF: Man, however the hell I’m feeling that day. No, but I’ll probably think about a fit for two days before I wear it. There’s still some stuff that I gotta wear that’s in my closet, but I need a little help this upcoming season. So I’m looking for a stylist, PSA.

STOKES: Just throw it out to the universe. METCALF: Here’s a little story I got. I met this group of kids, like, in March or April, they’re actors, and we went to dinner, went out, and we would just chill all the time, and they showed me I could be whatever I want to be in life, and whatever I want to do after football, whether that’s acting or fashion, they showed me that I could do it. And they’re actors on Outer Banks, so Chase Stokes, Austin North, and I’d throw C.J. Cook in there. They helped me realize that outside of football, I have people that care about me as a person, not just because of the jersey I wear. So I’m taking acting lessons and I’m big into fashion and I’ll sit at home and play video games all day, but just hanging around those three people really just helped me realize what I wanted to do after football.

STOKES: Oh man, I’ll Venmo you later for that one. Well, they’re calling me in to go do some more shit, but it was good hearing your voice. I’m excited to come bust your ass and watch a game this season.

METCALF: I appreciate you bro. Tell Austin I said what’s up.

STOKES: I will. Oh by the way, I might be getting a house in your neighborhood. So it’s going to be a riot.

METCALF: Say less. The shit going to be epic.