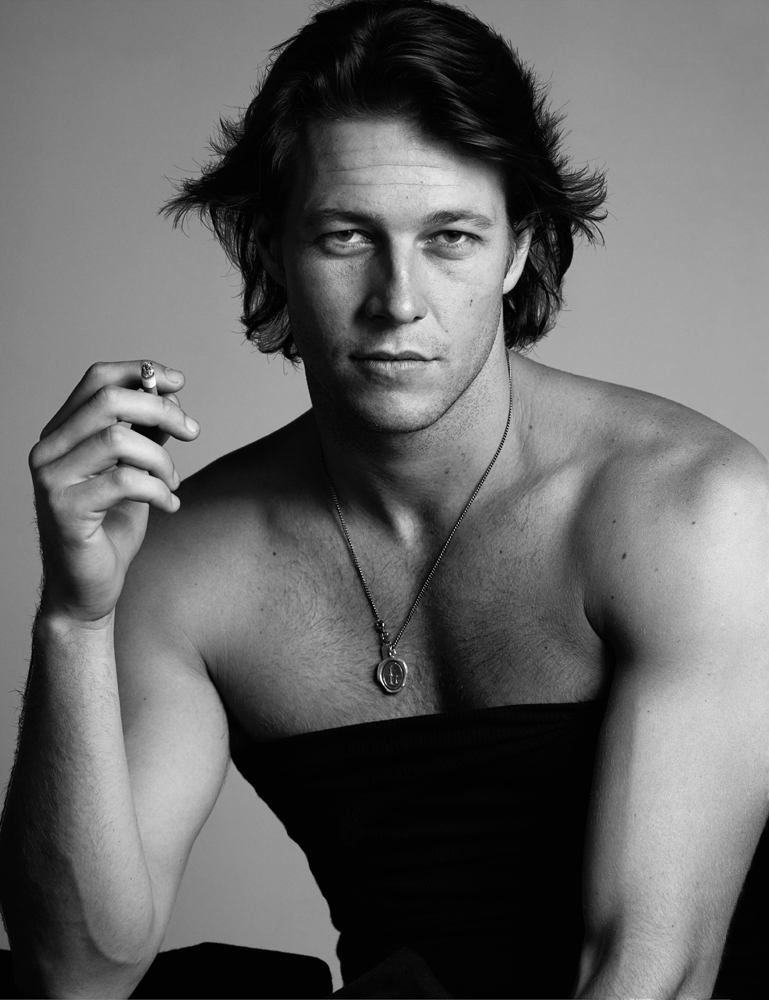 Given his earnest, manly demeanor and his leading-man looks, it’s a little surprising that 24-year-old actor Luke Bracey got his start playing a devious teenager on an Australian soap opera. In conversation, the Sydney native has the affable “guys want to be him, girls want to be near him” thing on lock—a magnetism that has served Bracey well in his adopted home of Hollywood so far, landing him roles in G.I. Joe: Retaliation and in the spy-thriller The November Man opposite Pierce Brosnan. In the romantic drama The Best of Me, out this fall, Bracey plays the high school version of a man who, years later, is reunited with his sweetheart. And in the hotly anticipated forthcoming remake of 1991’s Point Break, he’ll step into the action-packed role that helped make Keanu Reeves a household name. In other words, he’s hunting for the big waves now—and he loves to surf.

T. COLE RACHEL: Did you always know that you’d be an actor?

LUKE BRACEY: No. I thought I’d be a professional rugby player or go to university and get some degree in construction, just so I’d have something to fall back on. I got asked to audition for a soap opera in Australia called Home and Away. I had no idea what I was doing; I just tried to sound like a human being. Unbelievably, I got the job and then I ended up being on the show for about six months. It wasn’t until my third or fourth day of work that I realized, “I’m getting paid for this!” It was awesome.

RACHEL: What was your character like? Were you a bad guy?

BRACEY: My character was never intended to be on the show for longer than a few months, so I got to turn up and ruffle a lot of feathers. I went from good to bad to worse. In the end, my character was murderous. After being shamed in front of the whole school, my character tried to plant a bomb and blow up a school bus. I’d never acted before, so playing someone so devious was really exciting.

RACHEL: Did that make you a celebrity in Australia?

BRACEY: A little. People are really invested in that soap opera back home, so I’d have moments where I’d be out at a bar and a girl would come up to me and say, “I want to punch you in the face!” But in the end they’d go away with just taking a photo. It was crazy.

RACHEL: What did your family think about you suddenly becoming an actor?

BRACEY: They were a little apprehensive at first. No one in our family had ever done anything like that before, so they were worried. No one I knew in Sydney was thinking about how they might come to America and become a movie star. That would be considered delusions of grandeur. My parents were supportive, though. They just told me to keep at it as long as I was having fun. They told me to go for it.

RACHEL: When did you come to the states for the first time?

BRACEY: I moved to Los Angeles when I was about 20, all by myself. It was exciting. I had this moment when I felt like I needed to put on my big-boy pants and just make that leap to see what would happen. I remember my first night in L.A., I was sitting outside, looking out at the city and thinking, “I don’t know anyone.” I just approached it as a big adventure. I still think of it that way. I get to go places and do this amazing work—which doesn’t feel like work to me—and people actually pay me for it. I’m one of the luckiest blokes you’ll ever meet. I’ll be the first one to say it.

RACHEL: Can you do a good American accent?

BRACEY: Oh yeah, you’ve got to. I practiced my accent a lot after I got my first acting job. The problem is that there are so many different kinds of American accents. A guy from Boston is gonna sound much different than a guy from Utah or New Orleans. I find that really interesting.

RACHEL: Were you extroverted as a kid?

RACHEL: You were just cast in Point Break as the new Johnny Utah, the character made famous by Keanu Reeves in the original. You must be excited.

BRACEY: Oh yes. I loved that movie so much when I was a kid. I grew up surfing, which was a big part of why I loved the original. This new version expands the story so it’s taking place on a global scale, not just in Venice, California. We aren’t just surfing; there’s wingsuiting and snowboarding and rock climbing and motocross. We’re filming it all over the world. I’m giddy with excitement. I’m doing rock-climbing training now, and I’m hoping they’ll let me do my own surfing for the movie.

RACHEL: Do you feel weird about people thinking of you as a sex symbol?

BRACEY: My poor mother. Every time I get a job she asks, “Am I gonna have to watch you kiss someone again in this one?” and I say, “You’re probably gonna have to watch me kiss someone in most of them, Mom.” I don’t mind it, though. When people see you up on the screen, and if they—hopefully—make a connection with your character, it’s not unusual for them to feel a certain sense of ownership. I don’t think about it too much, honestly. I just try and show up and do my work. The rest just comes with the territory. It is weird to think about why people are drawn to watching you. I’m only just starting my career. There are those moments when you are asked to take your shirt off, and you realize why you are doing it. I wake up every day and look at my own ugly mug in the mirror and don’t think twice about it. The fact that other people might want to look at me still feels funny. It’s flattering, but funny. I still see photos of myself and think, “Who do you think you are, mate?” I’m like a kid playing dress up. I find it funny. I think it’s important to have a sense of humor about how ridiculous it is. I certainly don’t walk down the street and think of myself as a sex symbol.

RACHEL: Do you remember one of the first movies that really affected you as a kid?

BRACEY: It’s kind of embarrassing, but I loved Forrest Gump [1994]. I used to quote that movie all the time when I was a kid. I still love that movie.

RACHEL: Do you think of yourself as an optimist?

BRACEY: Yeah. I remember flying across the country once and getting stuck in the Dallas airport at four in the morning. I was so tired, but I was afraid that if I fell asleep, I’d miss my connecting flight. So I took a Sharpie and wrote a note—”I’m flying out on flight number XYZ. Please wake me up if it looks like I am missing my flight.” A few hours later some big dude shook me and said, “Hey, man, I think your flight is boarding now.” It’s nice when humanity comes through in the end. I still have a lot of faith in people. I’m a glass-half-full kind of guy.