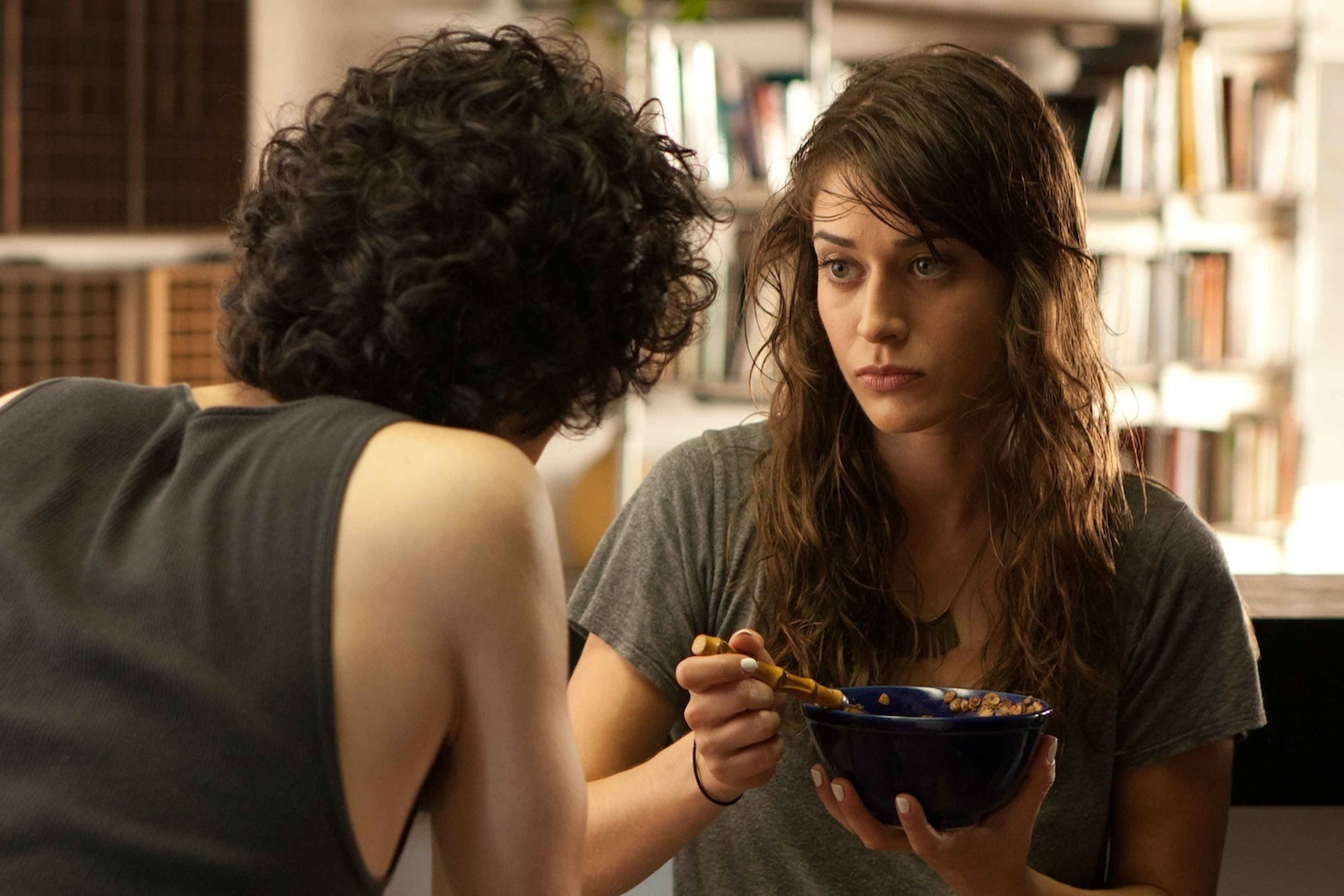 ABOVE: LIZZY CAPLAN IN SAVE THE DATE. IMAGE COURTESY OF IFC FILMS

Lizzy Caplan has had the kind of career in comedy most simply—and aptly—described as smart. The 30-year-old actress, perhaps best known for turns in a slew of prematurely cancelled cult television series (Freaks and Geeks, The Class, and Party Down among them), and as Mean Girls‘ Janis Ian, or Amy, Jason Stackhouse’s V-pushing hippie girlfriend on True Blood, has demonstrated a shrewd range in film and television that reveals her knack for understanding and exploiting characters’ idiosyncrasies for maximum comedic effect.

But while many of Caplan’s previous roles kept her somewhat under the radar, this past year has been especially fruitful, as Caplan has taken on, among other things, an arc as Nick’s ex-girlfriend on New Girl, the bizarre indie 3,2,1… Frankie Go Boom alongside Chris O’Dowd, and the very memorable, perpetually coked-up Gena in Leslye Headland’s sharp-edged wedding raunchfest, Bachelorette.

By contrast, her latest film, Michael Mohan’s Save the Date, meditates on the insecurities and uncertainties that accompany impending adulthood. Caplan shines as Sarah, a bookstore manager and illustrator reeling from an ill-timed wedding proposal from her overeager boyfriend, Kevin (Geoffrey Arend). Unsure of how to embrace love and commitment, Sarah rebounds with one of her customers (Mark Webber), as her tightly wound, practical-minded sister Beth (Alison Brie) plans her own wedding to her musician fiancé (Martin Starr), and Kevin plots, unsuccessfully, to win her back.

Interview caught up with (the unsurprisingly, very funny and self-deprecating) Caplan at home in LA last week to talk about Save the Date‘s approach to modern love, working with her off-screen comedy pals, the weirdness of Reddit, and her latest project, playing sexologist Virginia E. Johnson on Showtime’s upcoming drama Masters of Sex.

KELSEY: That’s kind of a record for LA, right?

CAPLAN: Yeah, it’s kind of ridiculous. I’m actually all bundled up in my house and it’s so funny and not cold outside.

KELSEY: So, this year was kind of a big year for wedding movies for you, with Bachelorette and Save the Date. What I thought was interesting about them, though they are drastically different, both of them end up being about what’s right for the individual, which, most of the time, is to buck convention. Do you see them as anti-marriage movies?

CAPLAN: It’s strange. It’s hard not to see Save the Date as kind of an anti-marriage movie since the happy ending for the engaged couple is that they put a pin in it for a little bit, and Bachelorette… well, that’s a whole other situation, I guess. [laughs] Everyone who made Save the Date, like the writers and the director, they’re all happily married and not anti-marriage at all, so that was kind of interesting to me. It’s figuring out how to do it on your own terms, which is really difficult, because everyone I know who has gotten married become seemingly all about your family and everyone’s making compromises… so maybe it’s a pro-doing-what-you-want kind of wedding thing? I don’t know!

KELSEY: Save the Date revolves around ideas about what adulthood and relationships can be and are expected to be, and how we struggle with that. Did you find the material to be relatable at all?

CAPLAN: Yes. Completely relatable. Completely. I definitely have been my character in real life in the past, for sure. My main thing with the movie was it explores a break-up between people who, it’s not like one of them cheated or did something terrible. I find that break-ups are so much easier when you can hate the person. Neither one of them hated each other, they still kind of loved each other. When that happens, it’s just so much more difficult to untangle yourself from that connection. I feel like it takes way longer.

KELSEY: It’s nice to see that every character has the best of intentions, but has to deal with their own respective faults and shortcomings, which end up being the problem. It’s really rooted in reality.

CAPLAN: Yeah. I think the same goes for Bachelorette. Weddings seem to be a popular theme in I guess, in the same way a high-school reunion movie is a popular theme—putting people together for a monumental event. Especially in Bachelorette, we haven’t seen each other in a long time, so there was all of those elements to it, but in Save the Date, a wedding seems to be, unless you’ve been married more than once, so then it’s a much more mellow affair—it’s one of the biggest decisions you make in your life. Of course, half of marriages fall apart and most people end up being single again anyway. It does, in that moment, feel like you are making the decision to live with the rest of your life, and there aren’t too many decisions like that that we make. I get why it’s a good place to set a movie, and I also understand why my character in Save the Date was so gun-shy about that. I don’t think she feels settled in her life, at all, to take that kind of a permanent step.

KELSEY: I also wanted to ask you about the art in the movie—Jeffrey Brown’s the artist, but did they have you draw anything?

CAPLAN: He drew pretty much everything. I can’t draw. We had a whole book of his stuff and for the images that it had to look like I was drawing them, they would be kind of penciled in, so I could ink over what he had penciled in. I was faking it, and he’s really good at it, and I’m really terrible at it.

KELSEY: In the film, as sisters, you and Alison Brie have such a great, witty dynamic. She’s another one of the great young funny ladies in Hollywood. How was it working together?

CAPLAN: Amen! So fun. Really, really fun. It was just effortless, and easy, which I always appreciate on things like this, especially a tiny, tiny movie. It feels three times as long if you don’t get along with people. I was a fan of hers before. We had never met, but we became friends really easily, like, pretty much instantly, so thank God.

KELSEY: You’ve worked with many of the same people on projects. Adam Scott comes to mind, and I read that you’ve known Martin Starr since you were kids. Does it just feel like a big comedy reunion when you guys get together and work?

CAPLAN: Absolutely. I find that working with friends is always the goal, even if it’s just one person. Because the comedy community is kind of insular, it’s easy to run into people you’ve worked with, even if you worked with someone on something for a day, or whatever. It just makes it more comfortable. I feel more confident in being able to be funny if I’m comfortable with the people I’m around. When you’re friends with them, it just makes it all the better. Plus, shooting a movie, you’re sitting on your ass for hours at a time, so if you have somebody there to mess around with and have fun, then it’s great.

KELSEY: In prepping for this I read the AMA you did on Reddit—how did that come about? How did you feel answering everyone’s questions, from the more standard ones to the kookier ones?

CAPLAN: It was a little intimidating before I started doing it, because I don’t have Facebook or Twitter, I have no kinds of social media skills, and I don’t think I’ve ever posted anything, like, on a message board before, so it felt kind of like going from 0 to 250, and especially because I’ve heard all these stories about Reddit, that they’re just so mean, and they’re going to ask you terrible things, and you’re going to be so offended! And I had read Mike Mohan’s, the writer/director of our movie, I read his, and he did a really good job with it and it seemed kind of mellow, so he gave me a bunch of pep talks and came over to my house and it kind of flew by. I had a really good time doing that.

KELSEY: Yeah, they just did one with Snoop Dogg actually. Excuse me, Snoop Lion. Most of the conversation concerned how many blunts he smokes per day.

CAPLAN: [laughs] That’s awesome. I wish I knew that before I did mine!

KELSEY: [laughs] Anyway. You’ve had these really memorable roles, in both film and in TV, whether its Janis Ian in Mean Girls or smaller ones, like Sara on Freaks and Geeks or Amy on True Blood; how do you approach getting into these characters who come from such different places? Is there a bit of yourself in every one that you connect with?

CAPLAN: I try to find some similarities between myself and the characters, even if it’s the tiniest thing. The True Blood character was probably the biggest departure for me, because I’m the opposite of like a vegan hippie chick. I can’t, I can’t even. But, in comedy roles I gravitate towards broken girls, and so I can definitely draw some real-life experience. [laughs] But I’m fixed now! I’m not longer broken, so it worked. The show I’m going to do next, Masters of Sex, is a drama and takes place in the ’50s, and that is very, very unlike me, how she behaves, there’s a lot of space between her and me in real life. It’s about Masters and Johnson, the sex researchers in the ’50s. It’s their story and their research, but their actual story, I’m very curious to see if people think that we are stretching the truth because the insane stuff in our show is true. It’s about them and their relationship, because they end up having this completely strange and sordid intimate relationship on top of their working relationship. It’s a multilayered, just dysfunctional thing, and I think it’s going to be fascinating.

But, I read the book about them and where she’s coming from, and we think very similarly, which is exciting. It’s a different time period, a different state and all of that, but I think that her mindset and my mindset do sort of match up. It’s just that my mindset is actually accepted in 2012, or more so than it was in 1956, that’s for sure.

KELSEY: And along with that, and the variety of movies you’ve been doing lately, do you think that you’ve been more selective and more experimental in the projects you’ve been working on?

CAPLAN: I’ve always been really selective. I just didn’t have the right to be as selective in other years, I guess. It’s very difficult to commit so much of your life to go shoot something that you think sucks, so I’d rather do nothing than go work on something that I really hate. Obviously, there are moments where you have to take jobs for money, everybody needs to pay their rent or whatever. But now, especially because I have this show waiting for me, I’ve completely relaxed. I’ve taken a lot of months off for the first time, really, ever, and I don’t know, it’s nice to do that, I guess? People like to do that stuff and take vacations? I’m just excited to go back to work and get going on it.

SAVE THE DATE IS OUT IN LIMITED RELEASE TOMORROW, DECEMBER 14.