Joe Keery has it all: a hit show, a beautiful girlfriend (who photographed this story), and a first-ballot ticket to the TV Haircut Hall of Fame. But instead of riding his hot streak and playing it safe, the 28-year-old actor decided to take a U-turn into risky territory, and play one of the most unsettling movie characters in recent memory. Enter Kurt Kunkle, the rideshare driver and really, really aspiring social media influencer that the Stranger Things star portrays in the nihilistic, adrenaline-soaked thriller Spree. Co-written and directed by Eugene Kotlyarenko, the movie puts you in the passenger seat of Kunkle’s Prius as he hatches and carries out a plan to murder the people he picks up, live on camera—all for the likes. Keery is terrifying in the role, not just because he brings a devilish charm to Kunkle, but because, as a fame-hungry outcast who exists mostly online, his portrayal rings all too true. After watching Spree, you may never see Joe Keery in the same way, but as he tells his Stranger Things co-star Finn Wolfhard, the risk was worth it.

FINN WOLFHARD: What’s up? Are you in your house?

JOE KEERY: I’m in my house in this little music area. Can’t wait to have you come over and make some music here. What are you doing?

KEERY: You’re a working man. What movies have you been watching?

KEERY: What did you think about it? Pretty funny, right?

KEERY: [Laughs] It was kind of boring.

WOLFHARD: A little long for my liking. No, obviously it was incredible. I’ve been doing a Pacino-thon, so I watched Serpico, and then Dog Day Afternoon, which is a perfect movie.

KEERY: That movie is so incredible.

WOLFHARD: I’m going to watch The King of Comedy next.

KEERY: That’s a huge one, especially for Spree. That kind of paved the way for a character like Kurt to come along, because he’s this person who is so eager and confident, because he’s so disconnected from reality.

WOLFHARD: I was going to ask about that, because Kurt is the most disconnected character I’ve seen in a long time.

KEERY: Every single person he interacts with is an opportunity for him to get famous. He’s a big helper. His whole thing is, “I’m going to help and I’m going to share. Sharing is inherently good, and by sharing I will help.“

WOLFHARD: How did you meet Eugene [Kotlyarenko]?

KEERY: He’s represented at the same agency as I am, so I just read the script like anyone else. After about page 20, I was like, “What sort of movie is this? This is insane.“

WOLFHARD: Did you guys develop Kurt together? Was he a different kind of character when you first started?

KEERY: We developed him along the way. The scariest part about it was this dude is a bad person. He’s a monster. And throughout production, what I was really worried about was, “Is this character too funny? Are we going to be laughing at this character too much, and rooting for him, when we really shouldn’t be?“ At the beginning of the film, it’s like, “Is this guy for real? He’s so cringey. He is so unaware.“ But then hopefully by the last two-thirds of the movie, you’re like, “Oh, this guy is just completely off the rails.“

WOLFHARD: When you did research, were there any specific YouTubers that you guys watched?

KEERY: A ton of people, from Logan Paul all the way down to the people who have one view. I think that those people are sometimes even more influential.

WOLFHARD: They’re way more influential to the character, because he isn’t famous. He’s not big. And when you don’t have a following, you have to start at 10. Did this role change your view of social media influencers?

KEERY: I don’t know. My own relationship with social media is pretty weird.

WOLFHARD: I wanted to talk to you about that, because we both have these huge numbers because we’re on a TV show, so it can be really fun, but it’s also very volatile. I just don’t think it’s a thing that should be taken seriously.

WOLFHARD: Nowadays, because people build Instagram posts into your contract. And I honestly don’t even—shocker—post a lot on my feed. You can tell when I’m actually posting and when I’m not.

WOLFHARD: Right, versus a picture of me with a fucked-up face. It’s pretty obvious if you go along what I have actually posted and what I’ve gotten someone to post.

KEERY: Would you ever delete your accounts?

WOLFHARD: I think about deleting Twitter every single day. I don’t even check it anymore. WOLFHARD: It feels like noise, like a giant air conditioning unit above your bed that’s so loud, and then you find the switch to turn it off and you’re like, “Oh, nice.”

WOLFHARD: But then again, I met some of my best friends in the entire world through social media. I met my best friend Josh [Ovalle], who is also in Spree, on social media. So there’s something inherently beautiful in that ability to connect with someone.

KEERY: It’s not going away, so it’s like, “How do you just only have the parts about it that you like?”

WOLFHARD: Yeah. I’m not anti-social media, because if I was, I’d be off it. I have respect for it, but I’m also terrified of it. That’s why I think this movie is important. My brother’s not a huge internet fanatic or anything, but he browses 4chan, and he was like, “The amount of dedication that Eugene put into this is insane,” especially in the very last few minutes of the movie, which I probably shouldn’t spoil.

KEERY: That’s the landing pad for the movie. When I saw that, I was like, “Okay, they’ve framed this movie in the right way, where it puts into context. This stuff happens. There are people who are disillusioned out there.”

WOLFHARD: They weirdly all want to be known. If you go back to the Columbine kids, they were making videos of themselves and being goofy with each other. Then they carried out one of the most horrifying acts imaginable, but you watch those videos and it’s so obvious that these kids want to be known. They want to be famous. That’s why this movie is important, because it sheds light on those kinds of people.

WOLFHARD: I remember when I first heard about this, Josh was like, “Hey, this guy Eugene wants me to be in his movie, and I think Joe is in it.” I was like, “What? Two of my best friends will be in a movie together? That’s amazing.”

KEERY: How amazing is he in the movie, too?

WOLFHARD: He’s kind of the avatar for the audience. He grounds it. You can tell so much work went into this movie, but I would say from talking to you, from talking to Josh and Eugene, there’s so much footage that the actors shot on their own, in character. Josh shooting Bobby’s Basecamp videos and you shooting Kurt’s World videos. That’s what I think is amazing about Eugene, too, is that he really trusted you and Josh to make these characters their own.

KEERY: That’s his thing across the board. He’s so trusting. WOLFHARD: A normal director wouldn’t let one of their actors go out and film three minutes of the movie by themselves and direct it. That just shows how incredible Eugene is as a collaborator. He really trusts people. In the movie, Kurt makes beats. Did you make those beats?

WOLFHARD: Oh, fuck. They’re the funniest beats. Who made them?

KEERY: His name is James Ferraro. For a long time while they were editing the movie, the music that James was making was the soundtrack to the entire movie. And so it was like Kurt scoring his own movie.

WOLFHARD: He’s the composer of his own film. How has making this movie changed how you see ride sharing?

KEERY: It feels less secure. I’m pretty much getting into a stranger’s car. Sure, you may be paying them, but you’re in someone else’s space. It’s crazy if you think about it.

KEERY: We had gone out to eat some food, before this movie had ever started, but the guy was driving like a maniac. It was actually terrifying. We had to report the dude. And even then, I was like, “I’ll just continue to take Ubers.”

WOLFHARD: Was there ever a conversation with Eugene about actually interacting with a real person, going out and talking to a stranger?

KEERY: The first night I ever met David [Arquette], he came into the production office for a fitting, and I was doing a fitting, and Eugene wanted to do some rehearsals. So we started taping, and the video started with me and David at the office in character as father and son. We went out and we got Thai food, we went to a bar, and it’s all in character. And David is just so game for all of this. And I’m like, “Is this still the movie?” Eventually I was like, “I think I kind of have to go home.” And David and Eugene both dropped me off at my house. But I remember after that experience being like, “Okay, I’m really going to have to step my game up, because these guys are really in it.”

WOLFHARD: I think when people see you in this role, they’re going to be like, “Holy shit. This is Steve from Stranger Things and he is terrifying. He’s De Niro in The King of Comedy.” It really cements you as a doesn’t-give-a-fuck actor that’s willing to do anything. 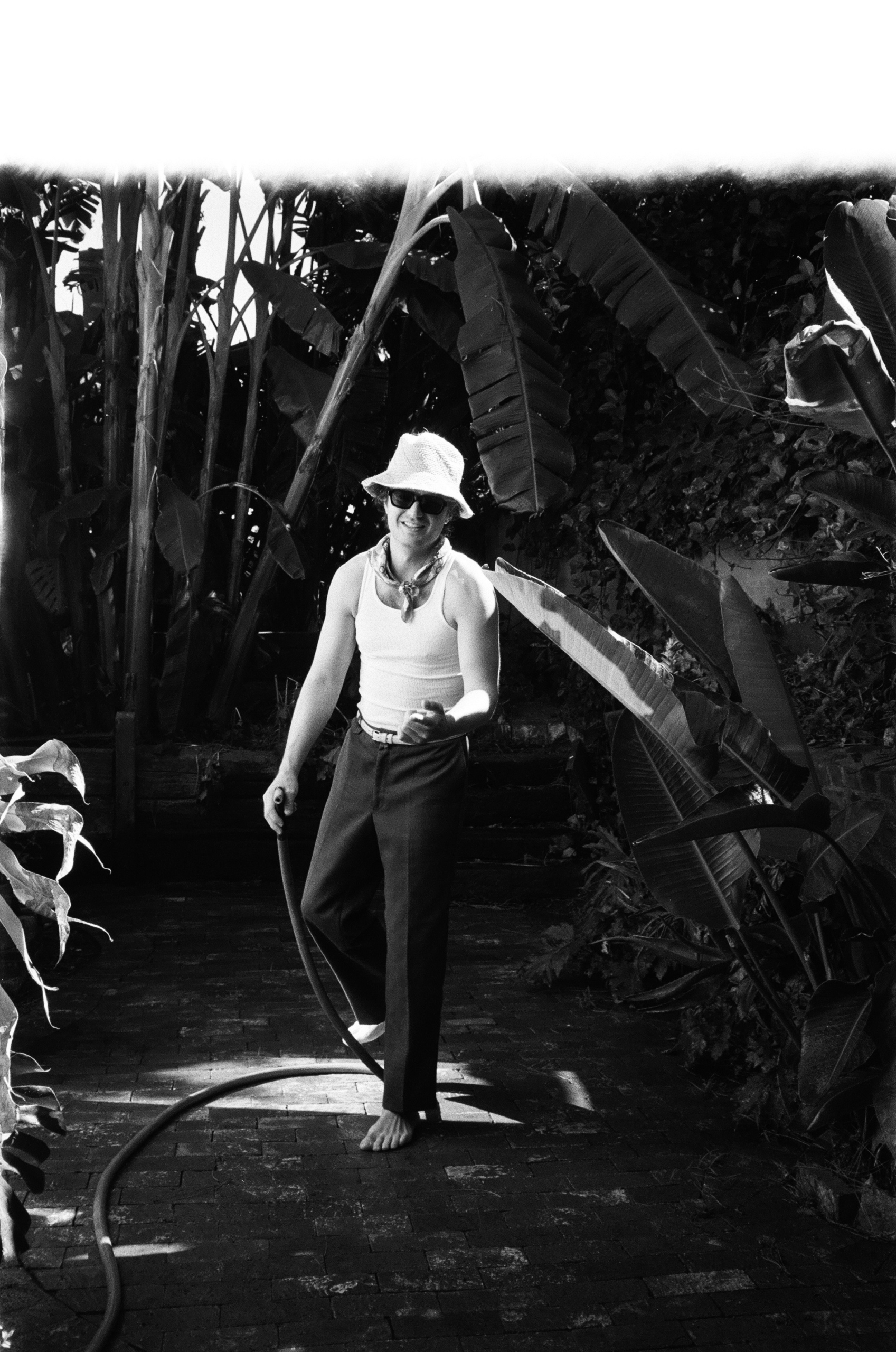 WOLFHARD: I’m especially excited for Stranger Things fans to see this movie. I can’t wait to see their reaction.

KEERY: They’re going to be like, “Wow, Steve is gross.” The whole movie makes me really nervous, man. It makes me excited. It’s so different and new for me, and we’re talking about some really sensitive shit here, and I feel like the movie really has a point and really says something, so it’s nerve-wracking a little bit.

WOLFHARD: What’s incredible about this film is that it’s not just a film. It’s interactive.

KEERY: Yeah. Eugene really wanted to make this an experience, which is why he started the Kurt Kunkle Instagram account. What a cool opportunity to be scrolling through Instagram and suddenly you’re like, “What the hell is this? This dude looks exactly like that dude from that show. Wait a second.” And there’s that second of confusion which is really intriguing.

WOLFHARD: The fucked-up part is, it’s giving the audience trust in the character before they even watch the movie. They’re seeing him and they’re like, “Wow, I really love this guy.” It’s only when they watch the movie that they’ll be like, “Who have I been following?”

KEERY: I think that’s the genius part about it. It’ll really open people up to hopefully critiquing their own relationship with social media, and that’s what satire does.

Spree is out now on VOD and at Drive-Ins across the country. For more info go to spreefilm.com