The Rise of Jamie Campbell Bower 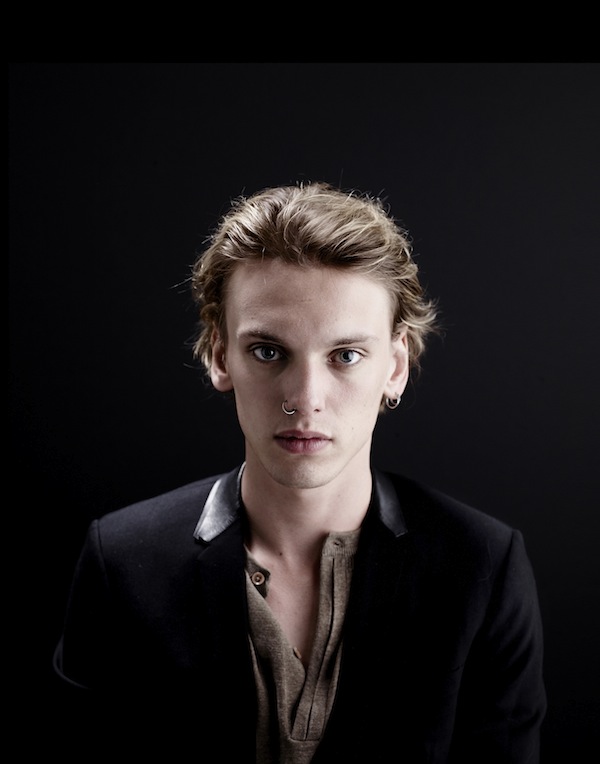 ALL PHOTOS BY GIULIANO BEKOR.

Sad or savvy, every young adult fantasy film aspires to be the next Twilight.  The best contender to date is The Mortal Instruments: City of Bones, based on Cassandra Clare’s six-book YA series. Lily Collins stars as Clary Fray, a Brooklyn teenager who discovers she is a “shadowhunter,” a warrior descended from the blood of an angel in a world that includes vampires, werewolves, warlocks, witches, and demons. As Jace Wayland, Clary’s love interest and possible sibling, British actor Jamie Campbell Bower stands out. There is nothing novel about the film’s premise, but it doesn’t need to be novel. The Mortal Instruments knows what it wants to be and does it well (or, better than Twilight).

The Mortal Instruments is Campbell Bower’s third fantasy franchise, and it’s not difficult to see why. Casting directors gravitate towards Campbell Bower’s ethereal aesthetic: his shoulder-length blond hair, prominent cheekbones, pale complexion, and  slender, yet oddly muscular physique. Only 24, the actor’s first role was in Tim Burton’s gothic musical Sweeney Todd (2007). Since then, he’s rarely left the fantasy genre; playing King Arthur in the mini-series Camelot (2011), a young Gellert Grindewald in Harry Potter and the Deathly Hallows (2010), and the leader of an ancient coven of vampires in Twilight: Breaking Dawn.

We recently spoke with the actor in L.A.

EMMA BROWN: Do you remember your first ever audition?

JAMIE CAMPBELL BOWER: Oh, god, my first ever audition. Yeah, it was for Harry Potter.

BROWN: Oh, really? That worked out pretty well then.

CAMPBELL BOWER: No, it didn’t, because I was a kid. It was the first Harry Potter movie.

BROWN: Oh. Who did you want to be?

BROWN: I can’t imagine you with black hair.

CAMPBELL BOWER: Can you imagine? That would be so weird. A casting agent came to school—they send casting agents round schools in the UK—and she picked a bunch of us. I completely forgot about it. We had to tell a joke, I told a really rude joke. I told a joke about a Christmas tree being rammed up a fairy’s ass. Oh dear…

BROWN: Did they laugh?

CAMPBELL BOWER: They laughed, yeah. But I don’t think that was quite Harry Potter material. [laughs]

BROWN: Were you devastated?

BROWN: They just kept you in mind for six years?

CAMPBELL BOWER: It was more than six years. I didn’t have to re-audition, they actually just called up and were like, “Do you want to be a part of it?”  Obviously it’s a British institution, I was like, “Of course I want it. Whatever, I’d love to be a small part of this. It would be dope.” And that’s it.

BROWN: Did you ever go up to Daniel Radcliffe— “You stole my life!”

BROWN: This is your third fantasy franchise. You’ve got to be in the running for some sort of record.

CAMPBELL BOWER: For being the biggest whore? [laughs] People ask me if it’s a career move or whatnot—it’s not. I wanted to be a part of Harry Potter. I wanted to be a part of the first Twilight movie and unfortunately it didn’t work out so great. So when they came back and were like, “Do you want to come in for a part for the second movie,” I was like, “Absolutely.” And then Mortal came along but we didn’t know when we were shooting the first movie that we were going to get green lit for another movie—we have been green lit for another movie before the first movie’s even been released, which is crazy.

BROWN: What do you like the most about your character Jace?

BROWN: Does he have any qualities that annoy you?

CAMPBELL BOWER: Yeah, the fact that he’s so sarcastic the whole time—sometimes he just needs to man up a bit. [laughs] I actually kind of fell in love with him, but he’s so into himself that he doesn’t really know it. [laughs]

BROWN: Have you read all of the books? Or did you not want to go past the first one lest it change the way you played the character?

CAMPBELL BOWER: I’ve read them all. I’m just waiting for Cassie [Clare] to release the last one. I read the first three when I got asked to come over for the screen test and then, upon getting the role, I read them all. When we were shooting, I focused on the first book. It didn’t cloud my vision—the great thing about literature is that you’re making up your own interpretation of the character anyway. Also, you’re given basically a bible of who this guy is and you’re kind of shooting yourself in the foot if you’re not reading it.

BROWN: There are so many books, did you ever have a moment of “Oh god, there goes the next six years of my life..?”

CAMPBELL BOWER: [laughs] Look, if I have a job for the next six years of my life I’m going to be the happiest motherfucker in the world. I’m under no illusion—this game is incredibly fickle, that’s what this industry is, and I’m very aware of that. If I can do this in the next six years, that would be great. If I can’t, that’s fine too. They better start making them quick, though, because none of us are getting any younger and I’m not entirely sure how long I can carry on. If we’re doing the last movie when I’m 30 and I’m meant to be playing 19, 20—I’m starting to look a little bit ropey at the moment anyway, there’s lines coming—I’d be fucked.

BROWN: Does your agent tell you to stay out of the sun?

CAMPBELL BOWER: No, never. They know if they tell me not to do something I’m gonna do it. [laughs] They’ve now figured that out, so they just don’t talk to me until they have good news. [laughs]

BROWN: Do you think The Mortal Instruments presents an unrealistic portrayal of love?

CAMPBELL BOWER: I mean, at no point in the movie does Jayce turn around to Clary and say, “I love you.” Is it an unrealistic portrayal? I think there are times in life where you’re automatically drawn to somebody and it’s weird—you freak out a bit. I think that’s what this portrayal is. It’s something deeper than just aesthetic admiration, I suppose. They don’t say that they love each other—they want to be together but it’s hard, what with them thinking that they’re brother and sister they’ve got a bunch of shit to deal with. [laughs] I don’t know if that’s realistic.

BROWN: Did you read any young adult books when you were a young adult?

CAMPBELL BOWER: It sounds really cheesy and corny, there was a book called The Lives of Christopher Chant [by Dianna Wynne Jones, 1988], which is very, very similar to Harry Potter. Too similar, some have said. I sort of got into those for a bit. I’m a dirty kid, I like to be outside, I like to run about, I like to get messy. So I spent a lot of time outside as a kid, skating and just being a disaster. I was obsessed with Dogtown—I still am obsessed with Dogtown, the Z-Boys. I love Stacy Peralta and Jay Adams and Andrew Reynolds, all these guys. I used to think I was Chad Muska.

BROWN: You should make a skating movie.

CAMPELL BOWER: I’d love to make a skating movie. It’d be fucking dope. [With] sports movies—like skating movies—it’s hard. The last good one that I saw was probably Catherine Hardwick’s Lords of Dogtown (2005). I mean, Rob Dyrdek’s got a movie coming out but it’s more like a documentary.

BROWN: What film were you obsessed with as a child?

CAMPBELL BOWER: Oh my god, Waterworld (1995). Kevin Costner’s Waterworld. Insane. That blew my mind. Me and my cousin Josh we used to watch it the whole time. We loved that film.

BROWN: I don’t even know what that is.

CAMPBELL BOWER: Waterworld?! Are you for serious? Oh my god, go check it out.

BROWN: I’m looking it up now. It was nominated for an Oscar! It’s a serious movie?

CAMPBELL BOWER: It’s not that serious. He’s jetting about on a jetski and shit. But there’s a ride at Universal Studios in L.A.— the Waterworld ride. You’ve got to go on it. It’s mental.

BROWN: I’ve only been to Euro Disney.

CAMPBELL BOWER: Euro Disney is not my vibe. I can’t really deal with Disney, man. It’s not my thing.

BROWN: But you can deal with Universal Studios land?

CAMPBELL BOWER: Yeah, because they’re not pretending to be so happy all the time. [laughs] I don’t do so well with people pretending to be happy. When I was 16, I went with my girlfriend at the time and her family to Disneyland and I was so grumpy the whole time.

BROWN: I know you’re in L.A. now, but do you still live in London?

CAMPBELL BOWER: I live out of a bag. I just looked at what’s going on for me, I’m not gonna be back in England for more than a week between now and March of next year, I think, which is crazy. By that time the lease is up on my apartment! [laughs]  I’m getting a kick out of being homeless.

BROWN: Won’t you miss your family and friends?

CAMPBELL BOWER: I have the best friends in the world. I miss my friends, I miss my family but they always come out and visit me. I went to boarding school in the country so there’s no real differentiation between family and friends. I went there from when I was 8 until I was 17—it was insane. If you earn my friendship, you are my family and I’ll do anything for you.

BROWN: Is it unusual for people from your school to become actors?

CAMPBELL BOWER: Daniel Day Lewis went to my school. Juno Temple was in my year. Lily Allen went. The band called The Kooks went there. Minnie Driver. There’s a few of us kicking about but it’s not a stage school, it’s just incredibly liberal and let’s the individual do whatever the fuck they want. [laughs]

BROWN: Do you remember your worst ever audition?

CAMPBELL BOWER: Yes, I went into the wrong room. They started being like, “I see that you were at the Royal Shakespeare Company.“ I was like, “Oh my god, my agent has made all this shit up, just made it up so I could get in the room.” So I was like, “Yeah, yeah, it was amazing”—digging myself further and further into a hole. And then this girl comes in and I’m like, “What the fuck is going on?” And they’re like, “Okay, and now we’re going to read the balcony scene.” It was an audition for Romeo and Juliet. [laughs] I was like, “Um, I’m not meant to be here, I’m really sorry.” [laughs] I literally just ran out of the room.

THE MORTAL INSTRUMENTS: CITY OF BONES COMES OUT TOMORROW, AUGUST 21.