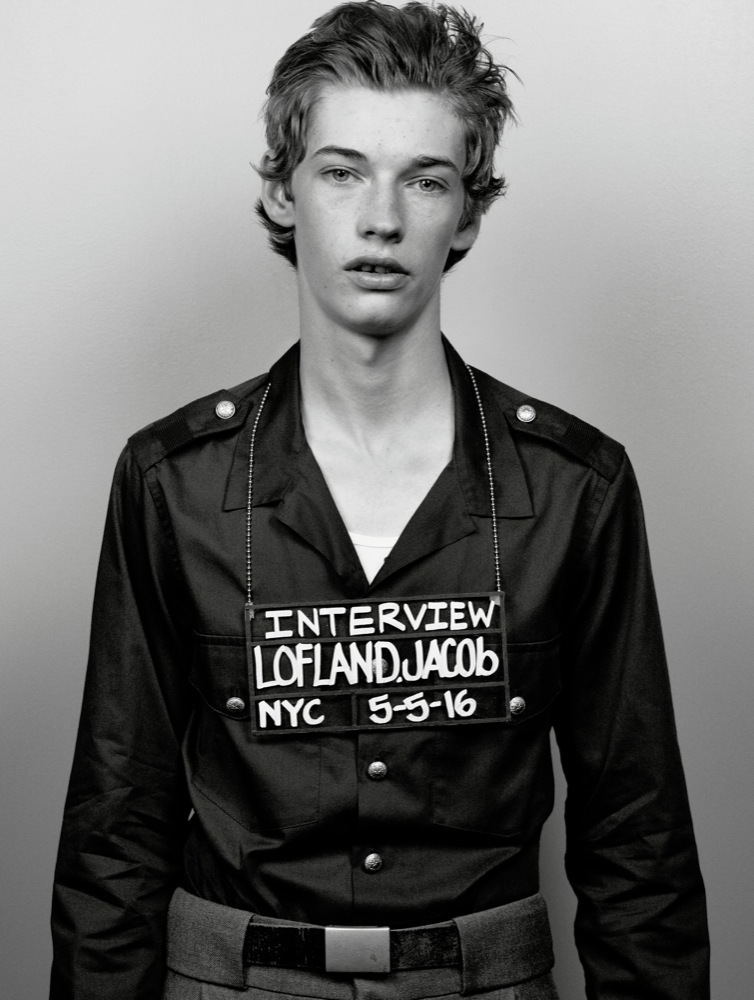 AGE: 19. HOMETOWN: Briggsville, Arkansas (population about 98). FILM DEBUT: At the age of 15 in Jeff Nichols‘s Mud (2013). ALSO SEE IN: The second installment in the Maze Runner franchise; Justified; Texas Rising. UP NEXT: Reuniting with Mud co-star Matthew McConaughey in the Civil War drama Free State of Jones; the independent film North with Sophie Kennedy Clark; a new AMC series adapted from Philipp Meyer’s novel The Son.

EMMA BROWN: Were you in any school plays before Mud?

JACOB LOFLAND: I’d done Christmas plays. The school I went too, we had seven kids in the whole class—we’re still best friends—so if you didn’t do the play, there wasn’t going to be a play. We were all always in the plays, even though we hated it.

BROWN: I know you still live in Arkansas, do you plan to stay there?

LOFLAND: I want to as long as I can. I enjoy small towns, I’ve got my friends there. I have friends in L.A. too, but I’m not much on traffic. I love driving, but I like driving on a two lane road where you can drive for hours and not see anybody.

BROWN: When you first signed with your agents, was there a specific kind of project you were looking for or did you just want more experience acting?

LOFLAND: I’m going to be honest with you, I still don’t know what I want to do. It just keeps happening. I get these scripts, and sometimes they just pop. Somehow I audition and get the part. Until these people start going, “Hey, we don’t want you in our movie anymore,” I’m going to keep doing it.

BROWN: What was your first unchaperoned project?

JACOB LOFLAND: Texas Rising. It was the best thing an 18-year-old could ask for: You’re by yourself in Mexico, where you can do anything you want, running around with a bunch of other actors. It was definitely an experience; I don’t know if it was a good or a bad one.

BROWN: It looks like your death in Free State of Jones is a pivotal moment.

LOFLAND: Dylan O’Brien is always asking me what I’ve got coming out, and I usually spoil it for him and tell him whether or not I die. I wasn’t going to tell him. We were sitting on his couch watching TV, and I was like, “Well, when I …” and I stopped myself. I was hoping he didn’t hear it, but he did. He was so mad. Then two months later, the trailer comes out, and he goes, “I’m so sorry I got mad.” That’s the best death scene I’ve ever had.

BROWN: How many death scenes have you had?

LOFLAND: I think I’ve died three times. I’m getting good at it. The hardest thing for me is crying. Where I’m from, it’s been instilled in me since I was little that men don’t cry. Thank God for teardrops and menthol.