In an industry not known for being overly cerebral, Ezra Miller has emerged as the first millennial superhero, and a bona fide star. While his early roles were tinged with adolescent turmoil, the 25-year-old actor  with heart-jolting good looks is now a member of the world of DC Comics, where he has played, over the course of three films, Barry Allen, a.k.a. the Flash. Despite the part’s mainstream cachet, Miller is still very much a nonconformist. When he took the role, beginning with 2016’s Batman v Superman: Dawn of Justice, Miller, who identifies as queer, became the first openly LGBTQ actor to be cast as a lead character in a major superhero franchise.

Miller studied opera as a child. After dropping out of his New Jersey high school to pursue acting, he landed his first job in the angsty indie Afterschool (2008) at 16, as a disaffected boarding school student. He gained widespread attention for his performance as the sociopathic son of Tilda Swinton’s character in 2011’s We Need to Talk About Kevin. More high- profile projects followed: The Perks of Being a Wallflower (2012), the Amy Schumer–penned Trainwreck (2015), and the Harry Potter spinoff Fantastic Beasts and Where to Find Them (2016). He also hasn’t totally shed his musical past—when not saving the world on-screen, he plays in the three-piece “genre queer” rock band Sons of an Illustrious Father.

Ahead of his return to the DC Universe in this month’s star-studded Justice League, Miller spoke with another singular thinker and artist: singer-songwriter Erykah Badu. What follows, if you can follow, is a conversation about ancient Egyptian healing, the physics of love, and the superhuman powers of everyday people.

ERYKAH BADU: Ezra, how are you?

BADU: I’m exquisite. I think you’re so interesting, and I have so many questions for you.

MILLER: I’ll have attempts at answers for you.

BADU: I’ve seen you perform with your band, Sons of an Illustrious Father.

MILLER: I didn’t know your presence was among us.

BADU: When I watch you perform, I’m actually watching you communicate. And the way you communicate is the way I communicate. When I’m singing, it feels like I become one living, breathing organism with everything around me. So I’m really interested in this voice of yours, in this frequency that you are feeding into the universe. Tell me six adjectives that describe how you feel right now.

MILLER: Hmm, well, my legs are a little wet because they’re poking out under the awning, and it’s delightful.

MILLER: This water that’s falling on my legs reminds me of the beauty of healing, and how the Flash will sometimes slow down the frequency of his molecules in order to pass through a solid structure. It feels good.

BADU: Good. Give me four more.

MILLER: I feel wonderfully insignificant. I feel like one of those little bugs that hops across the water in this rain.

BADU: I love the humility. We’re in an industry that thrives on power and enthusiasm and outgoingness. How do you find the silence underneath it all?

MILLER: It’s such a dangerous thing, isn’t it? To endeavor to be a reflective surface. I think that artists don’t make art—the art makes itself through us. I’m not the doer, you know? I’m just along for the ride. Acting really reminds me of that because I don’t write the words; I don’t make the decisions. That’s the director. Narcissism is a tragic condition. It must be so miserable to live trapped in a reflection that only includes the smallest version of our identities. Our true identities should have no bounds and no limits. I heard that for a disorder to be listed in DSM [Diagnostic and Statistical Manual of Mental Disorders], a small enough population must have it, and that narcissism in the United States has actually fallen off the list because so many people at this point fit that analysis.

BADU: It sounds like you’ve come to the understanding that you don’t really need anything in order to be or to construct or to perform. It sounds like what you are describing is simply love. What is love to you?

MILLER: Miss Erykah Badu, if only I had the words. I think there are a million ways to say it. But if I had to try to sum up love, I’d describe it as connective tissue, as the blood of the universe or the water that runs through all of the cosmos. The Flash’s symbol is a lightning bolt over the heart. If there’s any sort of superpower we desperately need right now, it’s this transcendental force that reminds us of union and connection. I know it sounds a little cheesy and cliché, but I think that superhero stories come from somewhere. We make these aspirational images—whether it be wizards or superheroes— to remind us that we actually have this capacity in ourselves already. I think that electricity can run through disconnected wires, no matter how broken and mangled they are. Superheroes, every single one of them, come from the world of imagination and they’re played by humans, they’re written by humans, and it’s in the belief that we invest in these characters that they come to life.

BADU: The Flash has many superhuman abilities. He can accelerate his metabolism and enhance his strength. What superpowers does Ezra have? Give me three.

MILLER: I genuinely think I have a hugging superpower. I’m starting to master the transformative hug. I have a strange memory ability. There’s a lot of information that I don’t cognitively know, but that seems to rise up at moments of need. That feels like a superpower. Something that nobody knows about me is that I discovered at a young age that I could sing in two tones. I don’t do this in performance, because it’s something very special to me. But I’ve learned that it’s a practice that goes back far in time.

BADU: Buddhist monks do that. They practice a dual vibration of the vocal cords—one sounds like a raspy tone and the other is a clear note.

BADU: The only other two people I know who can do it—and I’ve heard them do it—are D’Angelo and Lalah Hathaway.

MILLER: D’Angelo does undertone singing? That actually doesn’t surprise me too much.

BADU: And then Donny Hathaway’s daughter, Lalah Hathaway, can also do it. Lalah does it in performance. D’Angelo has done it maybe once or twice; he doesn’t do it very often.

MILLER: That sounds like a wonder to behold. It’s brought me a lot of clarity and joy and comfort, and it’s something that I frequently use to focus myself in my work. This is true of all superpowers—they’re actually just human abilities.

BADU: In ancient Egypt, they practiced Solfeggio frequencies by vibrating their teeth to activate the spine in some sort of way where it sends these nerve messages throughout the body. And depending on the tone, it would help heal the organs. Everything you’re talking about, Ezra, is familiar to me, and when I asked you a minute ago about finding the silence under all of the chaos and noise, it sounds like you’re healing all the time. I was 27 years old when I started making music, and I was talented, but I wasn’t ready to be a boss of any kind. In this world of art, we have to wear a lot of different hats. How do you balance them all?

MILLER: I’ve come to the understanding that healing doesn’t always look like getting better. Sometimes it looks more like sickness or getting hurt. Wounds are often our greatest blessings. My mother loves the French language, and she speaks sometimes about how the word blesseur is the root for both the word blessing and the word wound. I don’t have any tattoos, but if I ever were to get one, I would get that word written on the bottom of my foot. And this is in all superheroes, you know? For so many of them, the way they get their power is through a traumatic event. The Flash gets hit by lightning. I feel like I’ve had a lot of space and a lot of peace in the early part of my life to take on these explorations of pain. As a white man, there’s a dangerous tendency to think of our experience of the world as universal. The most important part of my practice as an artist has been remembering to stay humble. There is so much hurt, so much sorrow, so much pain in the world, and I think when you’re born and bred into privilege, it’s easier to have a closed perspective on things. But there’s this opportunity that’s open to all of us to let empathy connect us back to one another.

BADU: Sometimes I feel like I’m watching everything from an observation deck. As an artist, I’ve had the privilege of practicing love, of practicing the physics of love, but a lot of people don’t have that. Privilege is when you are able to move freely through a place and excel. Lack of privilege is when you don’t have the opportunity to do any of that— you just have to stay at a steady pace in order to maintain. If I had to see myself as anything, it would be a spiritual being first; second would be black, white, and Mexican; third would be Catholic or Christian or Muslim; fourth would be tall, skinny, and ugly. It’s interesting to see that we come from different worlds, but we seem to be walking the same path.

MILLER: We’re all parts of a bigger tree, ultimately.

BADU: You’re divine. I rarely come upon someone who speaks the same language as me. It may sound like a bunch of bullshit to everybody else. [laughs]

MILLER: I’m sure. But perhaps they’ll suspend disbelief for a moment to read the conversation of two people who could be described as slightly strange.

BADU: We’re just picking up what the universe is putting down.

ERYKAH BADU IS A GRAMMY AWARD–WINNING MUSICIAN, RECORD PRODUCER, AND ACTRESS. A BOX SET OF HER DEBUT ALBUM, BADUIZM, CELEBRATING ITS 20TH ANNIVERSARY, WILL BE RELEASED THIS MONTH. 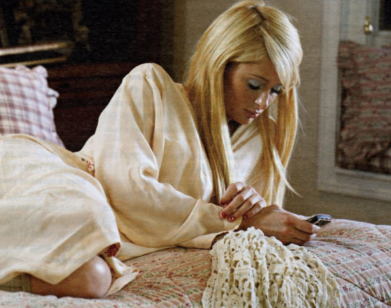