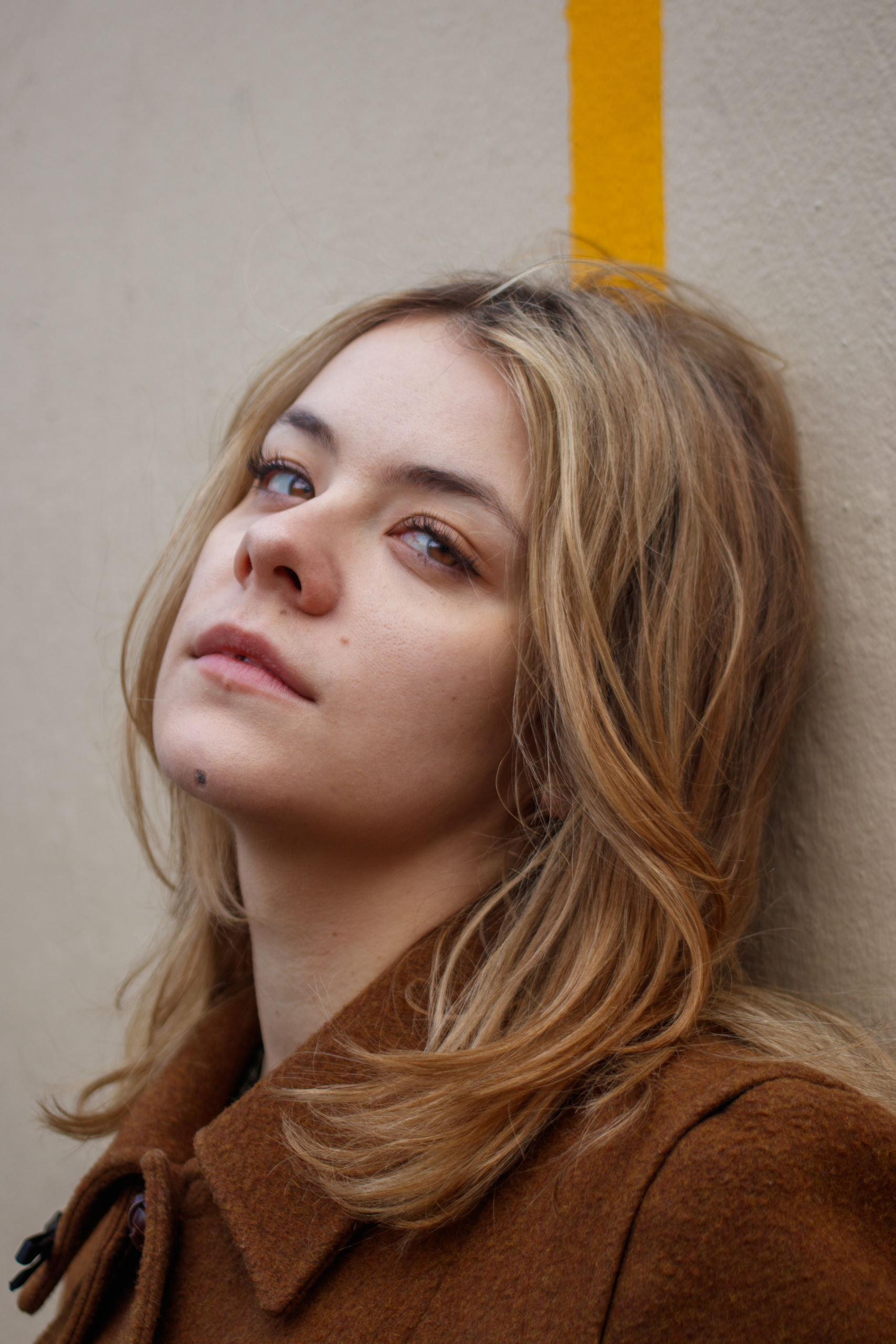 Most of the internet first encountered Dasha Nekrasova as Sailor Socialism, a viral video icon who trolled an InfoWars reporter with the lines, “You people have, like, worms in your brain” and “All I want is free healthcare, honey.” Since then, Nekrasova has gained a reputation as a podcaster, actress, writer, and now, director. A central fixture of the so-called “dirtbag left,” a cadre of progressive podcasters, posters, and provocateurs, Nekrasova co-hosts, along with Anna Kachiyan, the cult podcast Red Scare, where she waxes profane and prophetic on the status of all that is contemporary.

A Dimes Square socialite with a generation-defining vocal timbre of “post-ironic pre-disappointment,” Nekrasova’s film roster includes Wobble Palace, The Ghost Who Walks, and her latest, Softness of Bodies, an Amazon release written and directed by Jordan Blady in which Nekrasova plays a poet living abroad in Berlin. Kicking off a whirlwind year, she also just wrapped production on her directorial feature debut, a psychosexual thriller set in the aftermath of the Jeffrey Epstein shitstorm. From a room at the Marlton Hotel, Nekrasova fielded some questions lifted from Andy Warhol’s 1977 interview with Glenn O’Brien, and gave us some red-hot bon mots on marriage, the American Dream, and a Freudian theory of desire.

CARINA IMBORNONE: What was the first thing you acted in?

DASHA NEKRASOVA: A student film at USC. I was in this lesbian postapoctalyptic Western.

IMBORNONE: What did you do for fun when you were a teenager?

NEKRASOVA: I grew up in the suburbs outside of Las Vegas, so I like, posted on message boards a lot. I was very online as a teen, and I liked to binge drink and call people on the phone that I had met on the internet.

IMBORNONE: What was your first ambition?

NEKRASOVA: Well, I wanted to be a child actor, but basically only so I could be a guest on David Letterman, to have his support and approval.

IMBORNONE: Do you think that the art world is dead?

NEKRASOVA: My podcast co-host Anna Khachiyan has put it very well: the art world is basically a barnacle on the side of finance. As such, it’s pretty irrelevant, which is why I prefer to work in the entertainment arts. [Laughs.]

IMBORNONE: Who do you think is the world’s greatest living artist? IMBORNONE: Don’t take this next question to heart, I didn’t write it. Are you a Republican or a Democrat?

NEKRASOVA: [Laughs.] I’m neither. I guess if I had to put a label on it, I’d call myself a Democratic Socialist, but I don’t feel represented by the two-party system.

IMBORNONE: Do you ever think about dying?

NEKRASOVA: All the time.

NEKRASOVA: Probably in some form or another, every day, but not in an actively suicidal way, all the time. But I do feel like being suicidal does give me the upper hand in a lot of situations.

IMBORNONE: What kinds of situations?

NEKRASOVA: Like, I can always just kill myself. I have the ultimate out.

IMBORNONE: Do you ever get drunk?

NEKRASOVA: On my favorite alcoholic beverage, vodka. Pretty predictable. I like Tito’s mostly, but if they have Russian Standard, I’ll do that. Or Chopin, the Polish one.

IMBORNONE: Would you like to live in outer space?

NEKRASOVA: I don’t think so. You age slower in space—do we have a fact-checker on that? That appeals to me, the aging slower. But otherwise no. I don’t think I would like the lifestyle in space.

IMBORNONE: Do you think that the future will be futuristic?

NEKRASOVA: That’s a good question. No, I guess I don’t, because we’re already inhabiting a version of the future, if that makes sense. I think it will be dystopian, but in a way that’s pretty banal, actually.

IMBORNONE: What place is the closest to that right now?

NEKRASOVA: It depends on where you are in the socioeconomic and geographic spectrum. Bangkok is pretty apocalyptic, in one of the most nihilistic ways that I’ve seen. NEKRASOVA: Yes. When I went on Wellbutrin, that did a lot for my work ethic.

IMBORNONE: Do you want to do a promo for Wellbutrin in your interview?

NEKRASOVA: [Laughs.] I definitely prefer working to resting. I think I have a hard time relaxing.

IMBORNONE: What do you like to do when you are not working?

NEKRASOVA: Karaoke. I like to stay at hotels and I like, well, flying a lot—in business class. I want to say traveling, but that’s not really true. I enjoy actually being inside a plane, getting carte blanche to take whatever pharmaceuticals you need. No one’s gonna get in touch with you. That is an ideal vacationing scenario for me, to just be like, in business class for a while.

IMBORNONE: Do you think psychiatry helps?

NEKRASOVA: Like I said, I’m a Wellbutrin success case. I decided in 2019 that I would just get medicated. I was really adverse to getting medicated for a long time, but then I was like, maybe I don’t have to suffer this much. Maybe if I wasn’t medicated, I’d be more aware of the many horrors that surround us. At a certain point, though, you just have to get out of bed. I was very chemically depressed, and still maybe am, but medication did help me a lot.

IMBORNONE: Do you know how to drive?

IMBORNONE: Do you want to?

NEKRASOVA: I think it’s too late for me at this point. 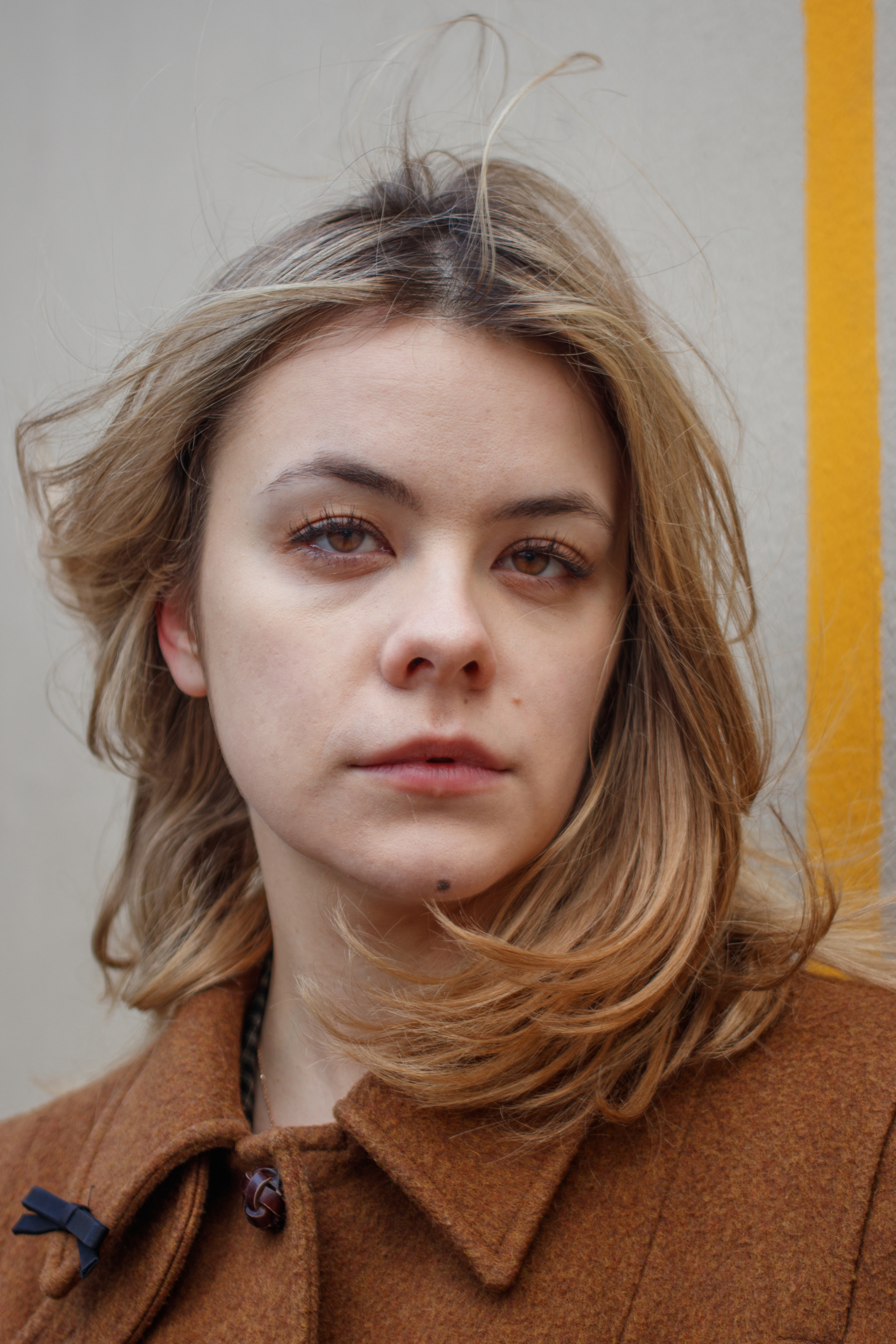 IMBORNONE: How much time do you spend on the phone everyday, do you think?

NEKRASOVA: Six to eight hours. I use my phone like a computer. That’s a work day in the life of an e-girl.

IMBORNONE: The next question is not from Andy Warhol, it’s from my friend who wanted to know. On your podcast, you said that everyone should read Freud. What writings do you suggest?

NEKRASOVA: Intro to Psychoanalysis, The Interpretation of Dreams, and Civilization and Its Discontents are good places to start. We’re seeing a return to late 19th century thought that’s been prevalent with people rediscovering Marx, and I think that Freud is an important companion to that.

IMBORNONE: Do you think that you’re a mother figure to anyone?

NEKRASOVA: To some people in my life, yeah. I felt so helpless for so long, so when I wasn’t in survival mode constantly, I became more maternal and present for people in my life in a supportive way.

IMBORNONE: Do you have that relationship with your co-host, Anna?

NEKRASOVA: We have a very good relationship, but I wouldn’t say that one of us mommies the other.

IMBORNONE: Do you believe in marriage?

NEKRASOVA: Yes, definitely. There’s a kind of pragmatism in getting married that is actually romantic. It makes your relationship into this venture that you both agree to participate and invest in, even though it might seem cynical to others. And I think that getting divorced is okay too.

IMBORNONE: Have you ever been in love?

NEKRASOVA: I’ve been in love a few times.

IMBORNONE: Do you have any advice for people in love, or out of love?

NEKRASOVA: I try to be vigilant about how to desire something is about lack; it almost depends on not getting it, or it’s about the distance between two things. Having that experience of desire gets confused with something like love. I’ll want something very intensely, and I’ll think that that’s a kind of love, but really what I’m in love with is the liminal distance between what I want and what I can have. Is that advice? I don’t know.

IMBORNONE: I need all the advice I can get.

NEKRASOVA: Remain vigilant, and take responsibility for your desires. A lot of people would be better off if they could.

IMBORNONE: Do you wear a wig?

NEKRASOVA: Wait, what? I love to. I don’t regularly. But I’ve been known to partake in wig play.

NEKRASOVA: I like florals, like tuberose and jasmine. That’s not that interesting. I could text you the names of perfumes. I’m at a hotel, so I don’t have my collection.

IMBORNONE: Do you believe in the American Dream?

NEKRASOVA: I guess podcasting is really the American Dream. I do, as an immigrant. “Believe” is really the complicated part of the question. I believe that very many things are possible, and that America has a unique way of presenting opportunities for people. But it’s easy to believe in the American Dream when you have some semblance of success. I’m not delusional. I know that the system is rigged.

NEKRASOVA: Definitely. At a certain point, once you reach a certain wealth threshold, you become a bad person. Something happens to rich people’s empathy preceptors. That’s why so many of them are pedophiles.

They probably have less stress in their life, if that’s how you want to measure happiness. But if you operationalize happiness as a kind of fulfillment, rich people have a distinct sort of void.

IMBORNONE: Do you think there should be any kind of censorship?

NEKRASOVA: I wouldn’t advocate for censorship in most cases. Saying that makes me feel like a lawyer. I think that context is important. Civil society should be governed by some standard. It’s not a free for all. I don’t think that snuff movies should be permissible, or something.

IMBORNONE: What do you look at first on a man?

NEKRASOVA: Ooh. I enjoy it when guys have cute teeth. And I don’t mean like straight, or perfect white teeth, I mean like a cute smile. I really like crooked teeth, actually.

IMBORNONE: And on a woman?

NEKRASOVA: Her waist. And her hair.

IMBORNONE: Do you believe in god?

NEKRASOVA: I’m Catholic, like Andy Warhol. I do believe in god, and I think he loves us very much. I came to it in a difficult place in my life. I’m very touched by devotion. The liturgy  and rituals of it have had a positive impact on my life. I don’t take Communion, and I’m not in a conversion program or anything, but I do attend mass and pray. Catholicism is nice because it involves a whole body of work outside of the bible—it’s a very aesthetic, literary religion. My faith is just something that’s improved the quality of my life, my thoughts, and my relationships.

IMBORNONE: You’re convincing me to go to church later.

NEKRASOVA: When I returned to the Church, many people speculated that I was experiencing a schizophrenic break or something. What’s so great about faith is that it doesn’t have to be grounded in rational thought. We are seeing a lot of people return to religion because everything feels so senseless and pointless, so why not be a Catholic? IMBORNONE: Do you believe in the devil?

NEKRASOVA: Yeah, sure. But I think that god is infinitely merciful as well. I’d like to think there aren’t very many people in hell.

NEKRASOVA: Yeah, except for Epstein.

IMBORNONE: Do you believe in the end of the world?

NEKRASOVA: That’s a real galaxy brain one. No, I don’t believe that reality will cease to exist. The world meaning everything that is. There will always be something.

IMBORNONE: Do you have any secrets you will tell after everyone’s dead?

NEKRASOVA: Who would I tell them to? I’m an open book. 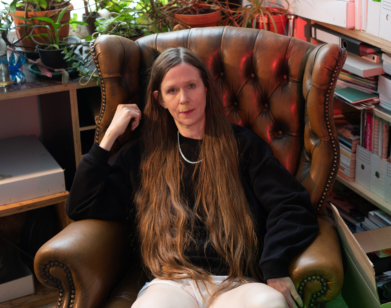