Barbie Ferreira Is Not Worried About The Future, She’s Just Trying to Quit Her Juul 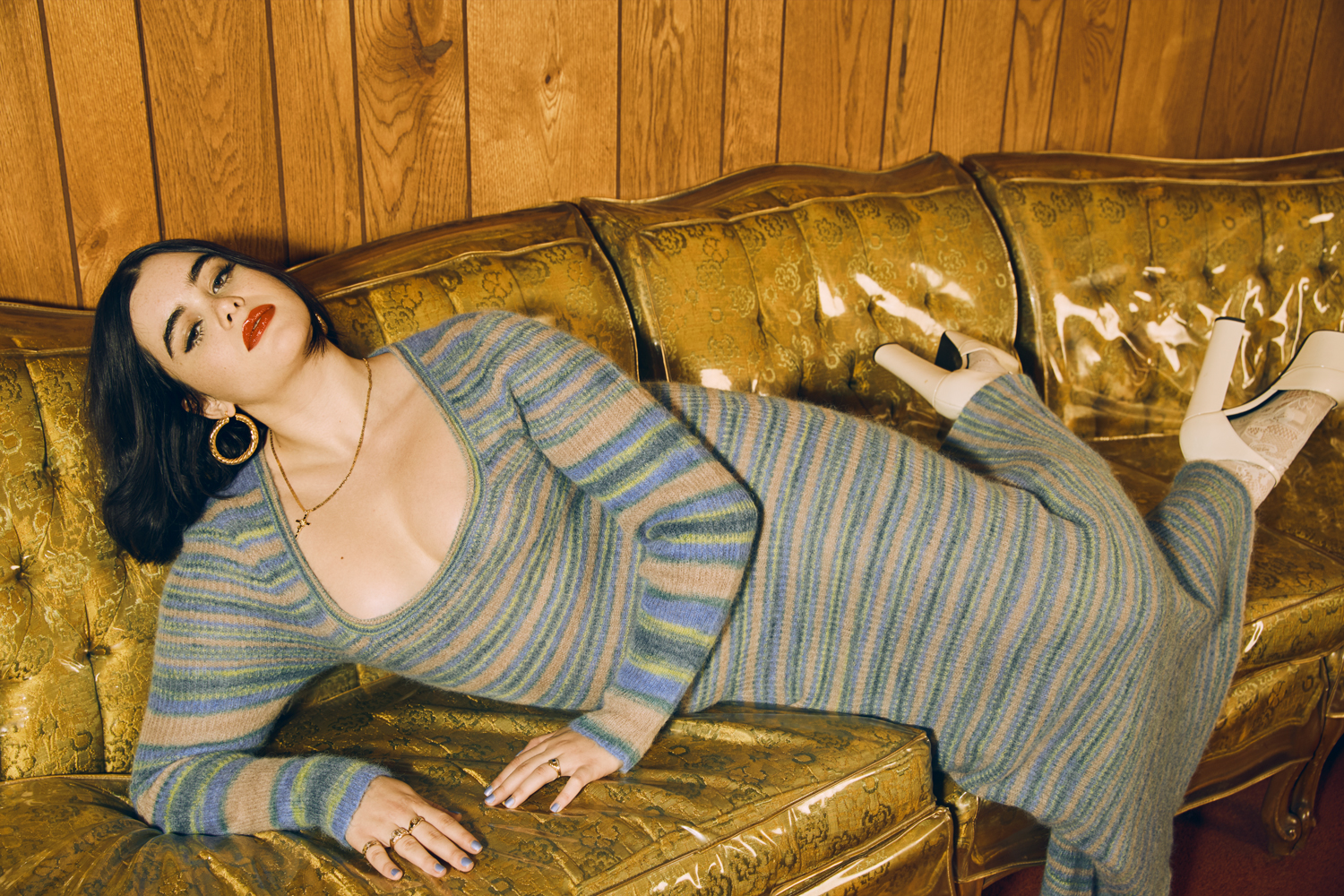 Although it might seem like Barbie Ferreira’s success happened overnight, that couldn’t be further from the truth. Before she turned heads as Kat Hernandez on HBO’s hit drama Euphoria, the Queens-born, New Jersey-raised actor began modeling at 16, after sending photos of herself to an American Apparel casting call. A body-positive campaign with lingerie brand Aerie landed her a spot on Time magazine’s list of the 3o Most Influential Teens of 2016, and her own award-winning Vice series, How To Behave. But the attention in the wake of Euphoria‘s success is new territory for the 22 year old.“It’s hard to be an observer of what’s happening when it’s happening to you,” Ferreira says from her apartment in L.A. “It’s very different than just being that girl who used to model or whatever it was. People have a connection to my character.” Fresh off of Euphoria’s season one finale, Ferreira arrived to her photoshoot without her voice and craving for Juul pods. We spoke to her about trying to kick that habit, the lessons she’s learned from playing Kat, and her favorite high school movies.

ERNEST MACIAS: What is your favorite Juul flavor?

BARBIE FERREIRA: Oh, Virginia tobacco. I’m actually trying to quit my Juul because it’s really bad for you. I used to smoke cigarettes, and I’m not condoning it for people who haven’t smoked cigarettes before. My mom smoked in my face as a newborn so it’s just kind of like this generational thing and I’m trying to quit it. I’m trying to not do anymore.

MACIAS: I feel you on that journey.

FERREIRA: I’ve been reading such a scary article.

MACIAS: Is it the one about the kid getting a stroke from Juul-ing?

FERREIRA: I know, it makes me want to throw my Juul out the window.

MACIAS: What attracted you to Euphoria?

FERREIRA: Really dark high school dramas or comedies are my favorite thing to watch. I’m always attracted to something that makes me think and makes me uncomfortable. When I read Euphoria it was so special. Sam Levinson, who created and wrote it, writes scripts so differently than other people. He’ll talk to you in the middle of the script, and be like “Put this fucking song on.” It was such a fun experience to read it. I got so excited about Kat. The character was incredible and so vague.

MACIAS: Do you think the show captures what the high school experience is really like?

FERREIRA: At the heart of it, it’s the most realistic interpretation I’ve seen on television or movies. A lot of things live in a fantasy world and this is ingrained in truth—even through fantastical situations. It is a TV show, at the end of the day. But mental health issues, addiction issues, body insecurities, slut-shaming, all these things are so prevalent. Especially with the Adderall age, I would call it, all these kids are just prescribed so many drugs and being over diagnosed. It’s a very specific anxiety to Gen Z kids where they get zapped because they see so much. They are exposed to so much.

MACIAS: Does it compare to your high school experience?

FERREIRA: I was kind of like the first wave. When I was in high school, people were just starting to use social media. I was on Tumblr, I was on Twitter. Now it’s this age where everything is shown-off on the internet. I think a lot of it relates to people threatening to post pictures, the body insecurities that I felt from feeling invisible, or exploring your sexuality online. All these things correlate to my high school community. I was very much a loner and about escapism—how to escape into the internet and find a community there.

MACIAS: I’m going to name some high school movies and I want your reaction. Mean Girls.

FERREIRA: The most quotable thing I’ve ever seen in my life.

FERREIRA: I used to watch it as a kid because it perfectly encapsulated my awkwardness.

FERREIRA: I brought my mom to go see it with me.

FERREIRA: I am obsessed with Jennifer’s Body. I saw the director [Karyn Kusama] the other day and she’s iconic. I’ll watch it once a year, because I just love a gory movie directed by a woman. I mean, Megan Fox. Hello! Jennifer’s Body perfectly encapsulates my mood, every day. FERREIRA: Oh my Lord. I still to this day will sing—what’s that song? The duet with Troy Bolton and Gabriella?

MACIAS: “The Start of Something New.”

FERREIRA: Yes, I’ll sing karaoke. I will let all of that out.

FERREIRA: Okay, let me unpack The Craft. The set design of The Craft is what I want my life to look like. I just want witchy candles. Like ’90s, Charmed, and camp everything. The lipstick, the cage, the school grounds, everything about it.

MACIAS: What is your favorite thing about Kat?

FERREIRA: My favorite thing about Kat is her humor, and the way she interacts with people. Being the snappy friend that has that dark humor. It’s more Daria, than my own personality. I was referencing all these girls who are in these shows that I love, who are vastly smarter than everyone, or at least they think they are. They’re dry and monotone.

MACIAS: And what’s your least favorite about her?

FERREIRA: Things hit in extremes and it doesn’t have a gray area. And although I admire it, I just wish she would kind of loosen up. But she just started her journey, so who knows?

MACIAS: Have you learned anything from playing her?

FERREIRA: I learned about all these insecurities and traumas that I have, which I never allowed myself to explore.

MACIAS: What’s your personal relationship to clothes and fashion?

FERREIRA: It’s the first time in my life that I am playing with fashion in a way where there’s no anxiety towards it. As a bigger girl, all my favorite things don’t come in my size. I was very resentful towards it, especially when I was modeling, because every day I was meeting a different team and people couldn’t style me. Now, I can have creative input in how I present myself and how I play with fashion.

MACIAS: Are some of the clothes that Kat wears in the show yours?

FERREIRA: Yes, even my glasses! They’re mine. I’m wearing them right now, actually. The choker in episode five is mine. The harnesses are from Zana Bayne, who I’ve known for a long time. They do a lot of the leather of the show. Heidi Bivens, who does the costumes, is really good with asking people what they like. We can always text her a thousand things with a thousand different plans, and she’ll pull what she needs.

MACIAS: What do you do when you’re off work?

FERREIRA: I like to watch weird movies and YouTube videos with my friends in my house. Sometimes I’ll go to the dog park with my neighbor and her dog. I’m just really enjoying L.A. I can be indoors or outdoors and be at peace. During the day, it’s like, we’re shooting 14-hour days, and there are overnight shoots, so being able to hang out and and see my friends without exerting too much energy is exactly what I like to do.

MACIAS: What’s in your future?

FERREIRA: I feel like it’s the first time I’ve had some time off, so I’m excited to reevaluate what I want to do and get my cards in order. I want to see what I like and be picky about it, but also really enjoy this. I really love acting, so I don’t know. We’ll see.