“I swear to you, I did not know that I was going to be walking in this Balenciaga show. I knew that I was involved somehow, but I thought I was just a guest. I mean, maybe everyone knew but me. I didn’t realize the whole CONCEPT— that the red carpet was the show—until I got inside and saw that there was an audience watching us on a live feed. I thought I was just going to show up for the Balenciaga show, get my photo taken on a red carpet, then go inside and watch a short film. BUT THE SHORT FILM WAS THE SHOW, and I was in it. That was a shock to me, to see a full audience already in the theater watching us. So yeah, I guess I walked my first Paris Fashion Week without actually knowing it. Sick show, had a ton of fun.” 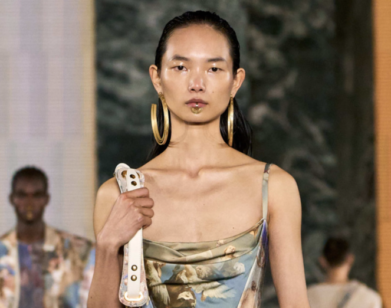