The Durag Gets the Telfar Treatment Clothing, Durags, and Earrings (worn throughout) by Telfar.

The durag, long a symbol of Black identity in this country, gets theTelfar treatment. “We set out to make a durag that is meant to be seen,” says Telfar Clemens. “This durag is meant to be a kind of luxury, and our goal, as always, is even more accessibility and ubiquity. We want to be in every braiding spot, barbershop, and bodega in America.” Speaking of America, in the interview below, the artist, musician, and organizer DonChristian talks to the designer about his complicated history with his adopted home. 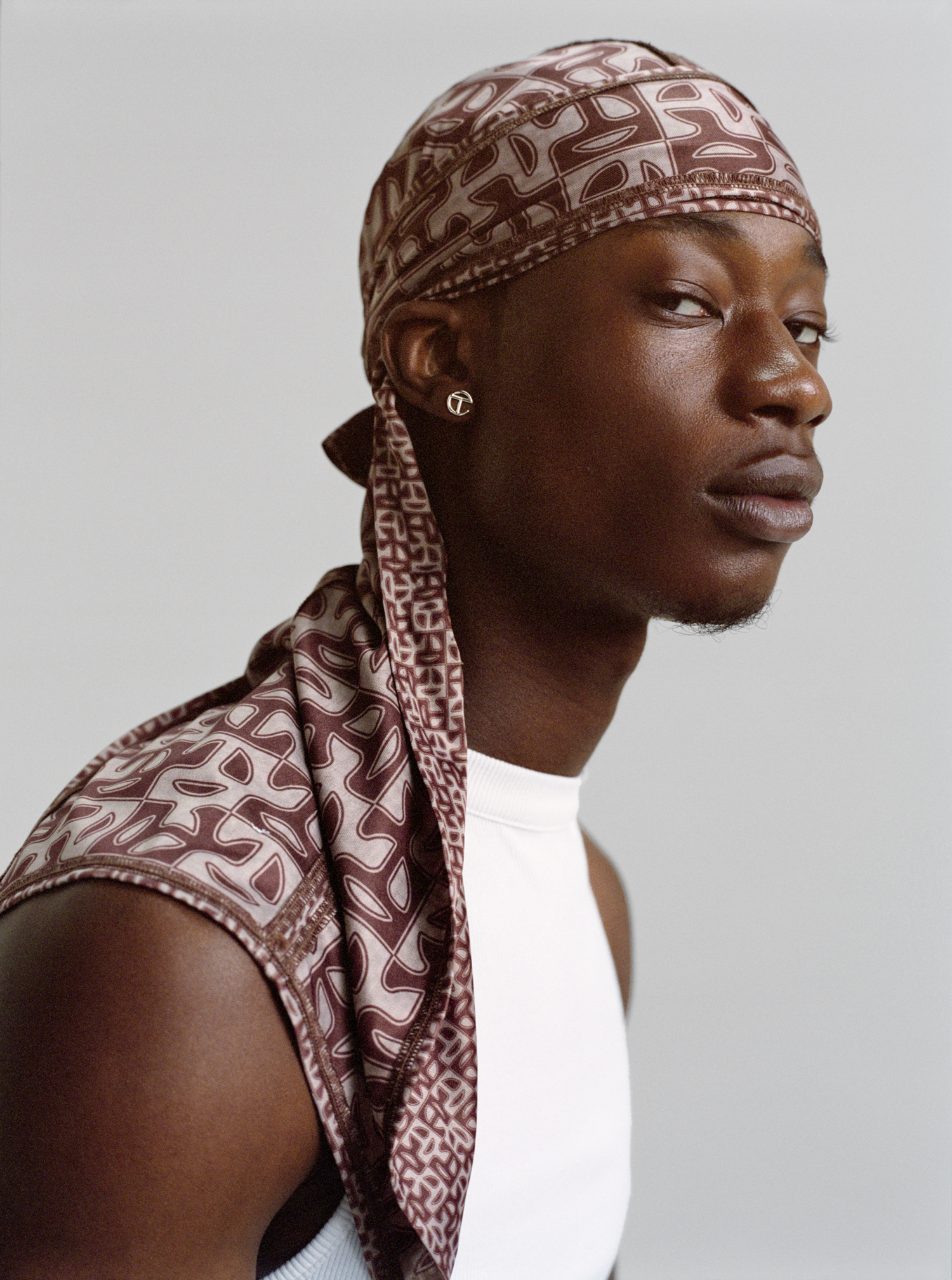 TELFAR CLEMENS: This is the first time I’ve taken any time off, since, I don’t even know, like, ever. I’ve never had a vacation or studied abroad.

TELFAR: I’m never not working. I’ve been able to travel while working, but it’s really nice to be like, “Where do I actually want to go?” I tried to go away at the beginning of April, because people were like, “America’s getting gross, you should get out of here.”

DON: I think it’s going to get worse before it gets better.

TELFAR: It’s going to get worse, but I’m stuck in a place of being really un-American because my mom and dad are Liberian. I was born here and then went back to Liberia and stayed there for the first five years of my life, and came back at age 5 because there was a civil war that just never ended. I’m not about to fight a war here because I’ve always felt so un-American.

DON: Is there a place in the world you’ve been where you feel the most light? Like you’re being held up by air and it’s not so heavy?

TELFAR: It’s New York. In Africa, I felt too American. You have to enjoy the luxury that you’ve been enjoying as an American, because in certain places, what we do is completely…

TELFAR: I’m taking things personally for everybody, but it’s just so much to take on at one time and there’s so much coming at you that I’m also just trying to figure out how I can deal with it.

DON: We’re all grasping for blueprints, but you’re setting a model to follow.

TELFAR: I don’t even want to be on that kind of pedestal. I’ve just had to work harder than a lot of people to do what I want to do. This is why, I guess, no one else can do that. Nobody else can do my job. And then I came back to New York and I was like, “I’m from America. I want to live here. I want to own some shit here. I want to build a future here.”

DON: What does ownership here look like for you?

TELFAR: First off, it’s owning property, and I don’t know if that will happen soon. I wanted some shit in New York because I lived in the apartment I was born in. But then that apartment burnt down early in January, on my birthday. That’s how my year started.

TELFAR: Yeah. I’m seeing how gross living situations are and dealing with landlords and building laws.

DON: Most of it is maniacal.

TELFAR: I live in this building that doesn’t know if it’s the projects or luxury apartments. There was piss in the elevator, but now it’s fixed up. The doormen aren’t doormen, they’re security. I have a big problem with my living situation, and I don’t want this lineage to continue because we come from a lineage of immigrants. So I want some shit, you know, that shit. Not even for me. Because I’m basically not planning to live anywhere. I don’t live anywhere. I haven’t unpacked a box in 12 years. So right now, even if I don’t have a thing, I don’t want a thing that someone else owns. I don’t want jewelry. I don’t want cars. I don’t want clothes that I don’t make.