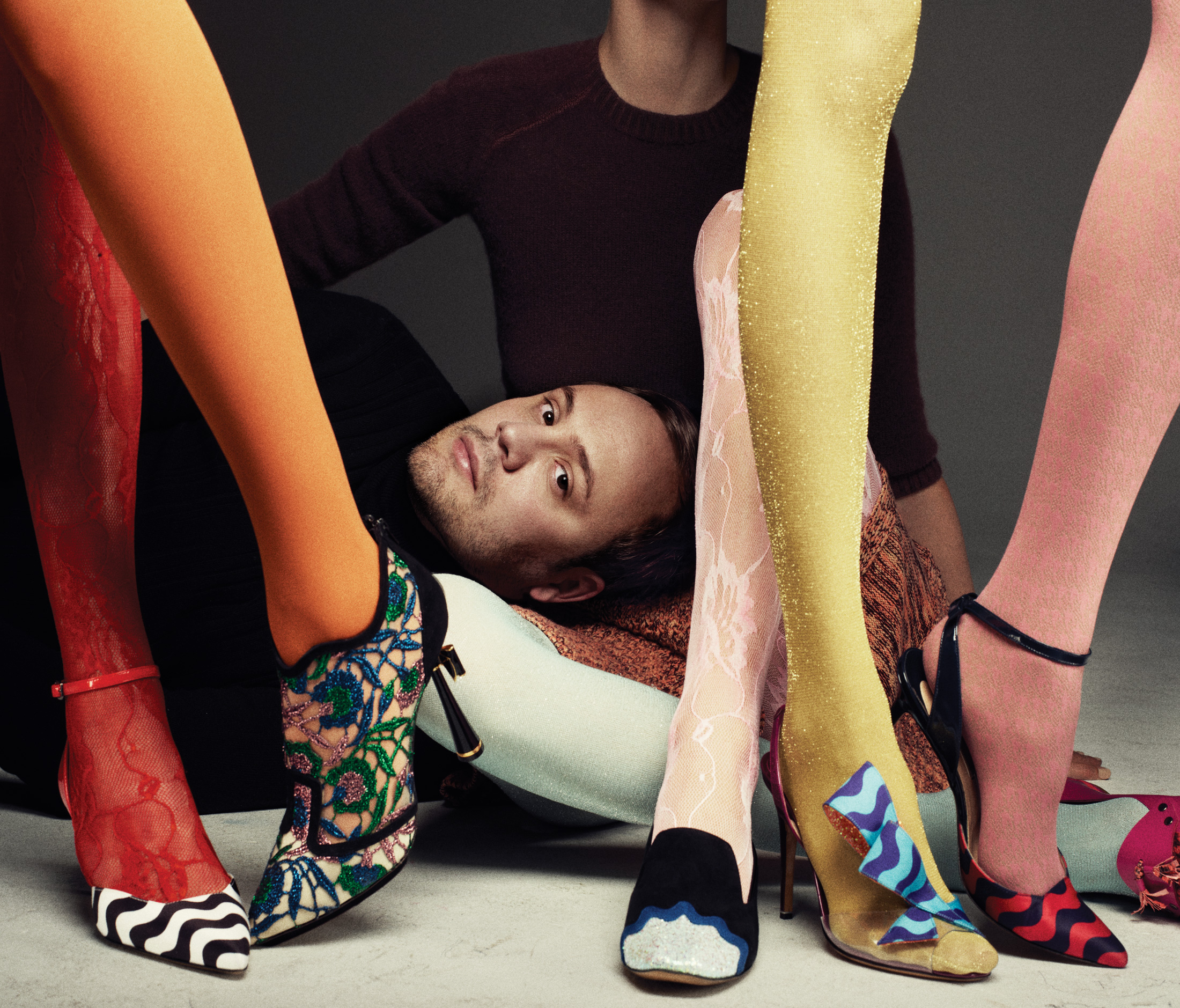 From his collection of Keith Haring shoes, which featured graffiti-print platforms and disco roller skates, to the melted candlestick-heel sandals he designed for Rodarte, Nicholas Kirkwood’s lavish looks are not for the faint of heart. But what would one expect from a designer who got his start selling hats for legendary milliner Philip Treacy? “Working with Philip was my introduction to the world of accessories,” says the 32-year-old, London-based Kirkwood, who met Treacy in 1999 while studying art at Central Saint Martins. Following a five-year tenure in Treacy’s shop (during which Kirkwood spent a brief stint living with the late, great Isabella Blow), he went looking for the same innovation in shoes. “There were incredible things happening with hats and ready-to- wear, like McQueen and Hussein Chalayan. But people weren’t exploring shoes in the same way,” Kirkwood says. He decided to help change that, launching his own line of sculpted, sky-high shoes in 2005. Since then, he has continued to create his own collections, as well as design one-off runway shoes for the likes of Peter Pilotto, Roksanda Ilincic, and Erdem. Of late, Kirkwood has been inspired by modern art, particularly the Bauhaus, for the way its “clean lines and multiple colors play together.” There’s plenty of play in Kirkwood’s fall collection, which takes its influence from 1920s Paris. Looking to the work of Jean Cocteau, Elsa Schiaparelli, Chanel, and Picasso, Kirkwood taps into the decadence of the era with enamel bow heels, embroidered mesh, ostrich feathers, and surreal booties embellished with abstract leather faces, whose zipper tassels are synthetic hair ponytails. And while Kirkwood rarely invests in new shoes for himself (“I’d be my worst customer,” he jokes), he plans to debut a men’s collection in January. “I don’t want it to be as opulent as the women’s shoes. It’s more about subtlety and interesting details.”

“I never intended to do fashion,” admits Pierre Hardy, the Paris-born shoe designer known for seductively sharp lines and architectural shapes. Indeed, Hardy has worn more than a few hats (and shoes) before rising to fame in fashion. Most spectacularly, for nearly 20 years, he was an accomplished contemporary dancer and credits the art with teaching him “how to move and be alive, in the most balanced way.” But Hardy was also a born draftsman. In childhood he spent his free time sketching everything from cars to eyeballs. “I always planned to paint or draw,” he says. “Designing shoes was just one of my gimmicks. I never thought it could be my job.”

Hardy’s first major foray into shoe design came in 1987 with a three-year stint at Dior. In 1999, he launched his brand and currently juggles the multi- million-dollar line with his roles as footwear designer for Balenciaga and footwear and jewelry director for HermeÌ?s. How does a man who holds so much sway in the shoe department know what will work for next season? “It’s always a bet on the future,” he says. His love of museums and galleries has long been a key influence—”For me, they’re the most advanced point of research for beauty and new shapes.” Indeed, geometric, color-blocked patterns and graphic, sharp-edged heels have been two defining elements of his shoes. “I try to make them fun. They must be radical and also visually stimulating,” he says.

While many customers may argue otherwise, Hardy swears that sex appeal isn’t his primary focus. “Women don’t need to be sexy every second of their lives. They’re seductive, clever, confident, and strong,” he says. For his Fall collection, Hardy fuses warm colors, like cobalt and wine, with sweeping curves, angular heels, and platforms. “I’ve tried to make something that protects and makes you feel like nothing can hurt you,” he says. In other words: A Pierre Hardy shoe takes a lot of risks but keeps you in safe hands.

Tabitha Simmons’s mother forbade her to wear high heels. So perhaps there’s a touch of rebellion in this British model-cum-stylist-cum-CFDA award-winner’s shoe line, which, having launched in 2009, features a host of sky-high spikes in buttery leathers, cool colors, and playful prints. Today, Simmons says she’s almost always in a heel—an impressive feat since she’s a mother of two young boys and circles the globe styling shoots, shows, and campaigns. This fast-paced lifestyle is integral to her line’s DNA. “The woman who wears my shoes is a strong character—she’s feminine and leads a busy life,” says Simmons. “I’m a mother, I style, I’m on my feet nine hours a day. So I try to achieve a comfortable but sexy shoe. Women need both. They don’t need to choose.” Simmons’s functional-but-saucy Fall offerings include red T-strap sandals with black-button detailing, polka- dot silk and leather booties, and a no-nonsense pair of black and snakeskin stiletto boots. They were inspired by the Pearly Kings and Queens of London, who don eye-popping outfits of pearl buttons to raise funds for charity, as well as Allen Jones’s graphic paintings, and Damien Hirst’s butterfly-wing stained-glass window works. “You never quite know where inspiration is going to hit you,” says Simmons. The oft-overlooked elements of life are key influences—in the past, she has even taken inspiration from a chandelier in the New York City townhouse that she shares with her husband, photographer Craig McDean, their children, and lots of Legos. Simmons has also done catwalk collaborations with various brands, including one this season with Giles Deacon. “Working on show shoes is something that I love,” she says. “Designing is hard, anyway, so it’s good to support one another.” Looking ahead, Simmons hopes to grow at a steady pace. “I’d love to open a shop,” she says. Considering that her shoes have already made their way into 60 stores after just three years, that lofty dream actually seems attainable—especially in Tabitha Simmons heels.

The flash of bright red soles has long been a luxury cue to express that a woman is wearing some of the finest shoes on the planet, but who knew that Christian Louboutin’s signature color also causes men to see green? “A lot of men said they were jealous of me because my shoes excite women in a way they can’t,” jokes the 48-year-old Frenchman whose footwear has become a pedal prize for ladies worldwide since the brand’s inception 20 years ago. “But men were also jealous of not being able to experience this feeling themselves.”

To that end, Louboutin introduced a men’s line in 2010 to offer an equal opportunity in shoe fetishism, with everything from studded high tops to python loafers. Last month, Louboutin opened his first American men’s boutique in New York’s Meatpacking District. “I look at things differently when I’m designing for men,” says Louboutin. “The store is a reflection of that.” As a result, the leather deÌcor of the Washington Street space is decidedly more macho than that of his women’s shop around the corner, with the novel inclusion of a “shoe tattoo parlor,” where men can have their own tattoos reproduced, via embroidery, on their Louboutins. “A tattoo is like a personal crest,” says the designer, who nearly got his own tattoo at the age of 15 but decided against it after seeing the pain it caused a friend. While Parisian showgirls have been an inspiration for Louboutin, travel and exotic cultures remain a primary influence. In his Fall women’s collection, golden cut-out leather booties and ornately embellished platforms were inspired by Brazilian birds and the 19th-century English curios that settlers brought to India. Despite the fact that he recently celebrated his two-decade anniversary, Louboutin says that he doesn’t have much difficulty keeping things fresh. “Love and enthusiasm have always driven my life,” he says. “And as long as it stays like that, I won’t have a problem putting it on paper.”