In the Mix: Charlotte and Sam Ronson 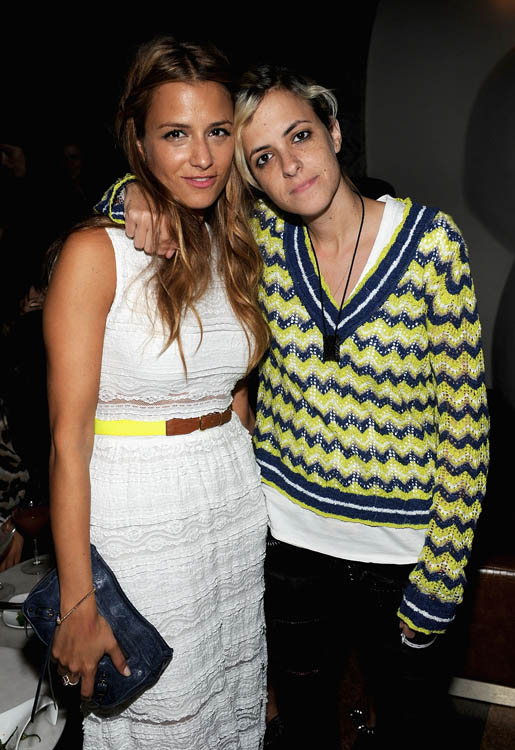 Charlotte Ronson’s backstage is, year in and year out, one of this week’s coolest mixes of music and fashion. Russell Simmons, Kelly Osbourne, Sky Ferreira, Patricia Field and Ellie Goulding joined Margherita Missoni, gathered in the front row on Saturday night, before after-partying at Co-op in the Rivington Hotel.

Patricia Field, New York punk priestess, was sporting fiery-red braids and green monk-strap rude-boy oxfords.  Field, the costume designer for Sex and the City (TV series and movies) and The Devil Wears Prada, told us that she’s been bitten by the film bug.  “I want to direct,” Field says. “I have a few scripts I’m working on, as well lots of advertising and endorsements.”

Punk, grunge and hippie-chic always influence Ronson’s aesthetic in ’70s boho touches, and this season featured denim-inspired indigo silks and burnt orange ombré dresses. But spring 2012 also found Ronson going in a new direction: “It was feeling a bit Victorian, 1920s lady, maybe even a little The Great Gatsby, the florals, crochet and higher necklines, lower hemlines, cropped jackets,” says the designer. “But always the Charlotte Ronson girl has to have more of a grunge feel, so that it’s not too precious or so feminine. A little more quirky, the patchwork denim, even all the chiffons, very day-to-night and modern.”

She sent her DJ/twin sister Samantha some photos, to convey the feel of the collection for her set.  “When Samantha got here, she looked at the run-of-show and said, ‘That’s not what I really was thinking it was.’ You can’t really tell until you actually see and touch it. So from there, we talked and discussed and went back and forth. Then I let her spread her wings.” This season was a  mash-up of Slash, Meat Puppets, Soundgarden, Arcade Fire, and their brother, Mark Ronson. Headphones plugged into the computer, her hands flew along two vinyls simultaneously.  “The computer is the library,” she explained.  “While I hear it in my headphones, I’m queuing or scratching or whatever on the vinyls.  I entertain myself.”

Samantha, who lives in L.A., regularly spins at the Brig in Venice and Hyde in Hollywood, as well as in “Atlantic City, Vegas, all over.” She’s also the guitarist for her band, Samantha Ronson and the Undertakers.  “We’ve been out playing shows,” she said. “Actually the first song I played tonight was one of my songs.”

Their sister, Annabelle, also walked in the show. The Ronson family, said Charlotte, “all kind of do their own thing but then we’re always super-supportive of each other by choice, not because we have to.  We all do different things so it’s nice to be involved in each other’s lives.”