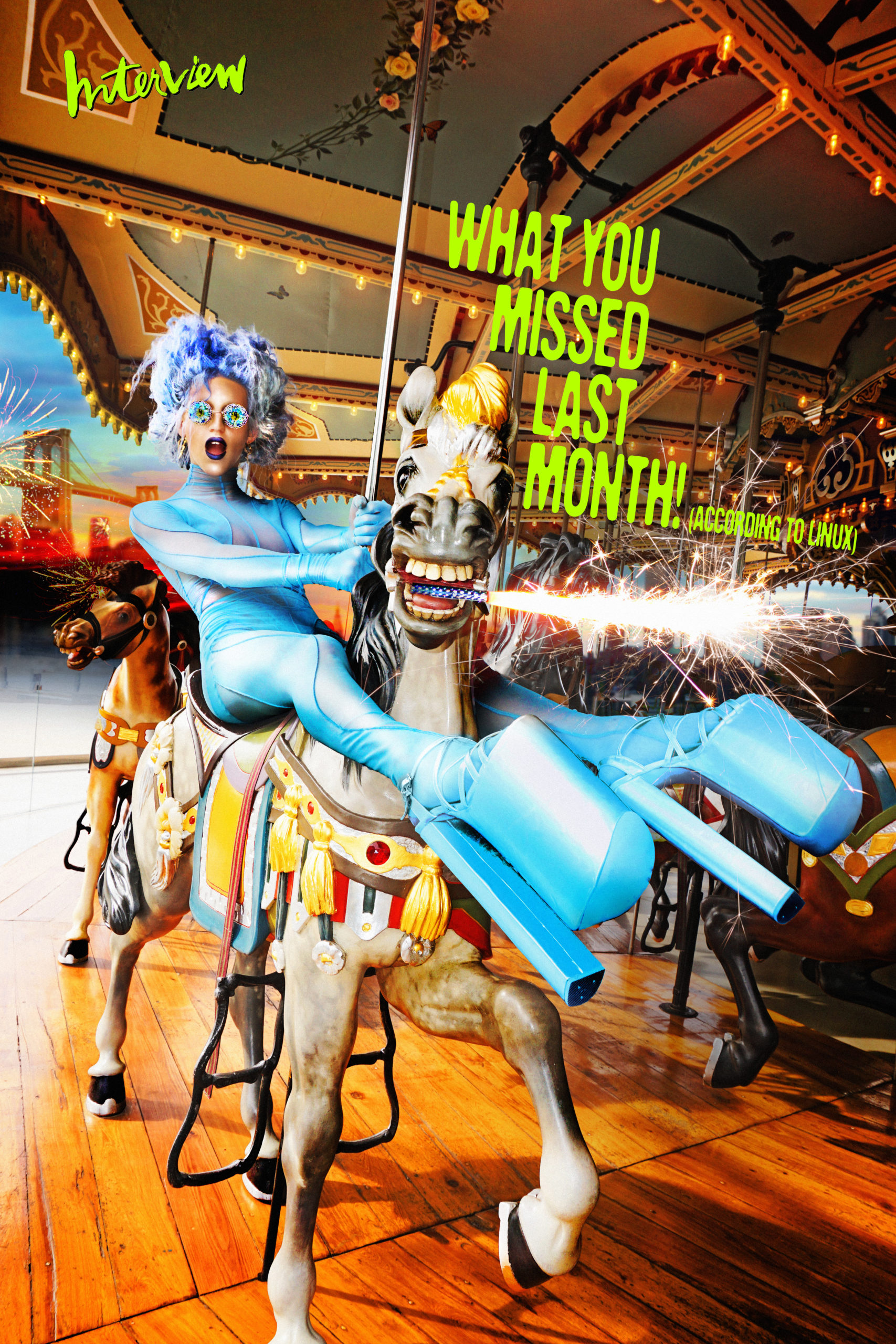 This is What You Missed Last Month (According To Linux), in which nightlife it girl Linux takes us behind the velvet rope and into the VIP section of Scene City. Through her extreme (sometimes exaggerated) lens, Linux gives the tea on what really happened at every party-of-the-century that floods your Instagram feeds. This August, follow Linux as she attempts to make the most out of the worst month of the year. (A note from the author: don’t take what she says too seriously—she’s just a club kid after all!).

Every month has a theme, a defining juncture that we use to camp up our calendars, except for August. August has no alcohol-centered holiday, no significant seasonal weather shift, and saddest of all: no fashion week! It’s as if Father Time tapped out seven months into the year, leaving us mortals to make our own fun. In true New York tradition, the city’s legends are also gone; whether dancing in Ibiza, chain-smoking in the Hamptons, or shooting “secret projects” in L.A. Not to sound like the girl who fell out of the window in Sex and the City, but what the hell happened to New York? What about our so-called renaissance?

Have no fear, fellow New Yorkers! The city keeps on giving. Just when you think she’s slowing down, she spits out a mouthful of spicy new talent, revved up for the chance to make her their own. These girls were all over town this August, keeping things going when seemingly nobody else would. Girls, New York nightlife salutes you! We’ve all been to 3 Dollar Bill for one reason or another. It’s a rarity for one venue to serve so many parts of the community. Ty Sunderland, who basically owns the venue at this point use to sell out the space in pre-COVID times with Love Prism, and now he fills up the outdoor yard on Sundays with Ty Tea. When Ty’s not there, organizers throw drag shows, concerts, and parties, giving a little something to everyone. Nevertheless, the August 6th gathering at 3DB was an incredibly special one: Papito, Mazurbate, and Janelle No. 5 threw a brand new event called Summer Skool. The party was hosted by a number of popular POC-focused event collectives—Dick Appointment, Papi Juice, Club Carry, and Bubble T joined forces for the day-party of the summer. Given the theme, guests arrived dressed as school girls, naughty teachers, or varsity sports stars (with Telfars to match!). Halle Cherry was especially on theme, dressed as a pink crayon (yes, she was literally dressed as a pink crayon, and she looked hot!). Food was served on school lunch trays. It was giving Mean Girls, but better. Papito Suave, one of the producers, managed to inflate an entire bouncy house in the middle of the dance floor, where partygoers could do bumps while they jumped. The supermodel, and newest face of Savage X Fenty, Memphy, DJed while a giant pizza was passed around the stage.  Undoubtedly, Summer Skool was a magical afternoon of queer POC unity. Papito, Mazurbate, and Janelle truly outdid themselves with this one—class was definitely in session, and the girls taught us EVERYTHING. Fashion getting her hair done by Sean Bennett at Rave Cuts. Photo by Carlos Garcia.

It’s that time of the month again where New York’s premiere rave-producer throws his monthly after-hours and we all have the best time ever. You’d think that’d be a good thing right? Wrong! Unfortunately for my journalistic purposes, the producer (and my good friend) is so dead-set on enforcing a zero-press rule for his events that I can’t even say who he is, or where these parties take place. My overflowing goblet of clout, he is convinced, will be the reason that hundreds of bridge-and-tunnels flock to his “immersive-techno-experiences,” thus ruining the carefully curated crowd he has built over the last decade.

His parties actually used to be too crowded. Back then, he ran a very popular website for New Yorkers to find out which parties in the city had open bars happening each night (myopenbar.com). In 2008, the stock market crashed and open bars became a rarity, leaving the site’s 20,000 daily users desperate for a place to dance. After countless years of secret locations, door rejections, and scandals, he’s finally scared the GA away, leaving only the coolest, calmest, and most connected New Yorkers left on the dance floor.

August’s theme was Rave Cuts: a salon specializing in raver-style haircuts. The party took place at a “restaurant” by a Home Depot in Brooklyn (they claim it’s a restaurant, but the only thing I’ve ever seen anyone eat there is ass). We’ll call the restaurant “Salty Mountain.” When I get into Salty’s, I grab a drink, take a pill, and begin the night’s adventure. I typically hate when photos aren’t allowed at parties, but at these raves it’s a blessing, as this is where the tastemakers of our city go to socialize, not social climb. This is the only place people like Anwar Hadid and Dua Lipa can go dancing and do drugs where they won’t be bothered. There’s great juxtaposition: half the room is verified, and half the room is homeless. After wading through hundreds of sample-size sweaty bodies, I find out why the party is called Rave Cuts. Downstairs, I find the hairstylists Sean Bennett and Cheekyma cutting DJ Harry Charlesworth’s hair into a mullet-hawk. Next up was time for Fashion, Dion Lee’s muse, to go under the knife. Sean attached two long bundles of turquoise hair to the side of her head. The salon stayed open until nearly 8 AM. Guess who’s up in this bitch? It’s AB, baby! The quintessential New Yorker, Azealia Banks, finally made her homecoming return to the stage at Webster Hall. After selling out the first show, she added a second show. After selling out her second show, she added a third show. After selling out her third show… well you get the idea! Anyone who’s anyone in New York finessed their way into the first show on Friday night. They say that the cool kits at Berghain all congregate in the front-left corner of the crowd, but at Webster Hall, we congregate front-right— it’s next to the bar and bathrooms! There was no opener, and as the waiting music played a little louder, the crowd starting screaming. It was almost as if AB was in her dressing room messing with the volume, laughing at us every time we were  tricked into thinking the show was starting. Finally, Azealia took the stage in a custom Bitch Jeans denim fantasy. For exactly 50 minutes, a sea of butch queens screamed to 14 of the New York rapper’s most New York Anthems. She ended the night with the song that started it all: “212.” Banks’ triumphant return proved that we look after our own in this city. If you rep us right, you’ve got a family of 7 million New Yorkers for life.

…The night didn’t end there. Azealia’s show was just the pregame for one of the wildest weekends of the summer. We went from Webster Hall to Club Carry’s Doll Mania at Knockdown Center. From there, we went to Andrew Makadsi’s new party Function, and then to see Volvox and DVS1 at Basement, to Alegria’s circuit party Viva at Brooklyn Mirage, to TyTea at 3DB, to Ladyfag’s Battle Hymn. We raced through a 72-hour nightlife marathon that was over, it seemed, in the blink of an eye. Time flies when you’re on the run!

Initially, the month of August had me feeling weary. I was nervous that everyone who mattered would be out of town or out of commission. But his month, our city proved its resilience. New York is a factory of talent, consistently pumping out fresh and hungry it-kids who seeming to want club fame even more than their predecessors. The kids won this month, but they should be cautious. August may have been theirs for the taking, but September—the busiest, most FOMO-fueled month of the year— is back from vacation, and she’s landing at JFK any minute.