We interrupt your regularly scheduled Salad Pages to bring you The Black Pages, as conceived by DonChristian. The New York-based rapper, producer, and visual artist has included interviews, photography, poetry, artwork, a mission statement, and an ad. Think of it as a magazine within a magazine.

“On June 6, 2020, through a series of serendipitous events, I inherited the keys to a vacant commercial lot in Crown Heights. With the help of friends, neighborhood folk, and artists alike, what was once a methadone clinic, laundromat, and pawn shop has since taken on a new and less tangible shape.We’ve covered the walls in murals, coaxed garden out of gravel, and found an oasis. There, for 85 days, we’ve researched, designed, and fabricated together, across various personal and collective projects, all in the spirit of resistance and radical joy. As I watched this living, breathing entity turn into itself and back out into the world, I remembered the name of my then-defunct finsta… Public Assistants, an abolitionist space, an LGBTQIA+ brave space, a pro-trans space, an anti-racist space. I thought I was going to ground this introduction in the subject of genocide, because that’s all that’s ever on my mind. This was going to be about my disdain for Manifest Destiny as an enacted concept and equivalency to white supremacy. This was going to be about John Gast’s allegorical painting ‘American Progress,’ as it appears across our middle school textbooks: revered in its depiction of white settlers chasing indigenous peoples west and out of the picture. I meant to touch on global, historical colorism and patriarchy as the foundations for all systems of oppression and disenfranchisement, like that André 3000 jumpsuit that reads, ‘across cultures, darker people suffer most. why?’ I wanted to really slice into the inextricable and intersectional layers of our collective and global depravity. That said, as my thoughts began to jumble, I had a series of personal realizations and I started making phone calls, the results of which you’ll see in the following pages.”

Members of Public Assistants reimagine the set from Lil’ Kim’s 1997 video for “Crush on You,” which itself took inspiration from The Wiz. Photographed by Mojo Disco. 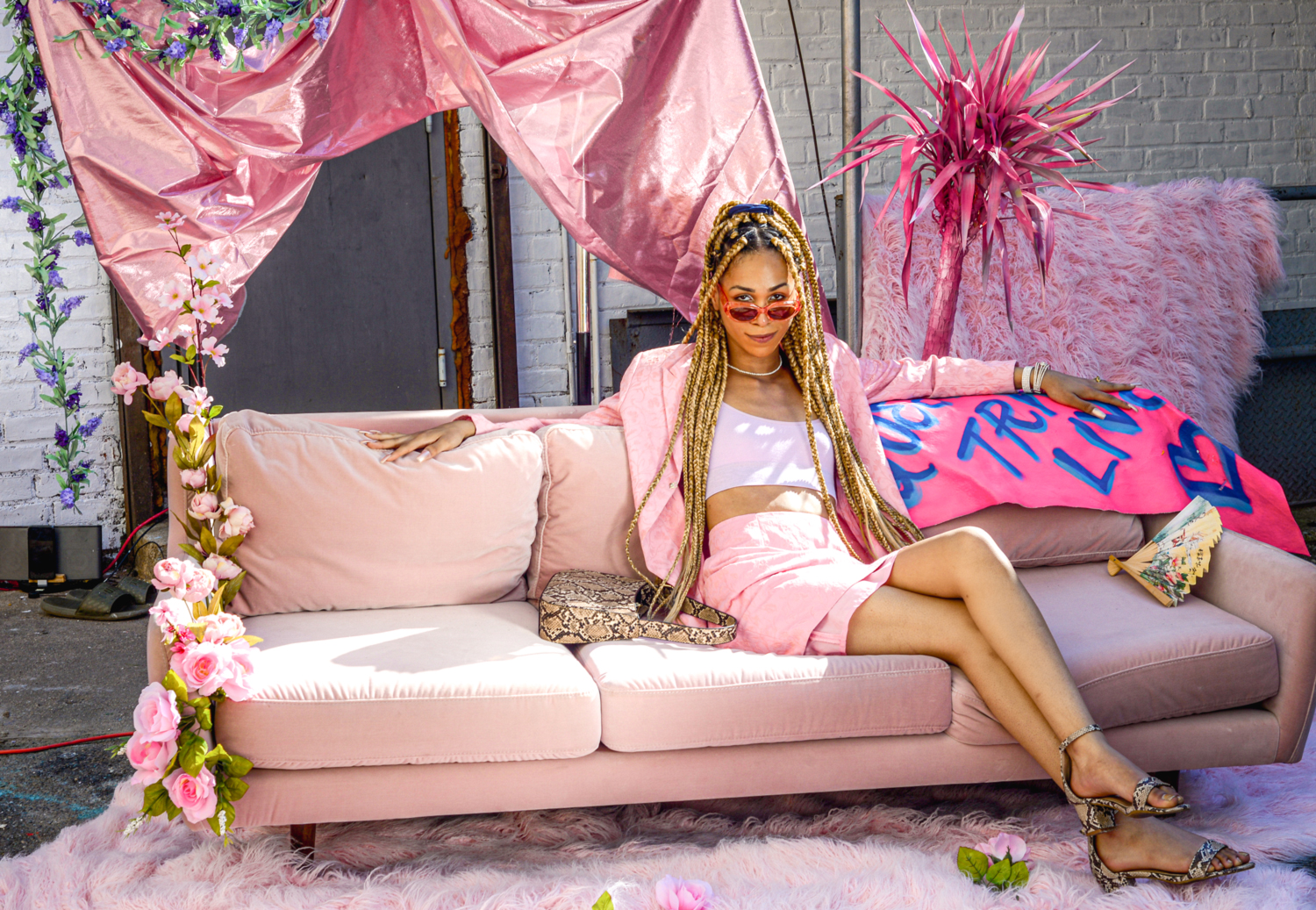 When Jaz and I met in 2013, we were both 23. Though her painting practice has exploded into performance and ritual space, she never stopped painting murals with the hood. When I asked Jaz how I may love and protect her better as her brother, she replied with the following:

remember,
You are the table. when they sit at your feet, what do they bring & what do they take, what do you give.
stay in spaces that feed your Softness,
for they equate to your safest Self.
the Self that dances in the rain,
cries, twerks & holds hands. the walls in which you can paint of numerous colors as it bleeds into the floor. stained. stay here. be here. Exist. “Black women, you are the table. The times of disputing hierarchies of suffering and debating with the general ‘bereft,’ as Mother Toni so benevolently put it, are over. Let me not stoke those embers further. My existence and that of my tribe, pillared by Black women and Black trans women—my mothers, sisters, and daughters—is radical enough to inspire this war against us. I invest in the creative, entrepreneurial, and healing endeavors of these women. Nourish Black women. Protect Black women. Support Black women.”

There’s a piece of me in New Orleans. There are pieces of all of us descendants of the diaspora and the Great Migration scattered up the Mississippi and along the Atlantic Coast. I met Phlegm in NOLA, and as I can’t visit them now, they gifted this original airbrush tee as a reminder of the marks left wherever we may find ourselves. “I won’t argue the psychological violence of gentrification, cultural appropriation, or respectability politics anymore. I won’t tell you to look up ‘social death’ as it pertains to genocide, or go so far as to evoke ‘the trope of the criminal’ flippantly. When I really go in, it’ll be for the people who deserve it most. Remember when W.E.B. Du Bois coined ‘the veil’ of white sensibility? I felt that then, and now I’m done sifting through to see it. Mother Toni said she first felt free once her work turned away from the white gaze. And so, we turn away. This is for us. In the words of the great K. Michelle, ‘Bitch is shakin’ the table.’ Yes, ma’am. We would like to see it.”

“I have but one priority going forward: the protection, preservation, and nourishment of my hyper-local community of family and friends. I have no more emotional labor to provide outsiders policing in. They don’t hold me when I fall. They don’t reciprocate or quench my creative spirit. They do not sustain me the way the people who embody these Black Pages do. They don’t negate, criminalize, or steal from my lived experience. Rather, my tribe embraces and honors it.”

A POEM BY WOLFGANG TILLMANS There are Public Assistants in the future. With Help from Lucas Mascatello