Keith Haring and Andy Warhol photographed by Ricky Powell at an AIDS benefit in NYC, 1986.

Ricky Powell is the Greenwich Village photographer known for capturing the soul of downtown New York in the ’80s. Powell, who died on February 1 at the age of 59, was known as the fourth Beastie Boy for his tight-knit relationship with the band and other era-defining artists like Run-DMC and Lenny Kravitz. Aside from his spontaneous images of music stars, “The Lazy Hustler,” as he was known, also captured the city ‘s burgeoning art scene, of which he was a part, mingling and drinking beers with the likes of Keith Haring, Andy Warhol, and Futura. His body of work serves as a time capsule of the experiences lived by a true New Yorker, who just happened to always have a camera with him. I met Powell outside his Greenwich apartment to talk about a few of the photos from his archive, now showing at Higher Standards, the Chelsea institution for aesthete stoner heads. Below, in one of his final interviews, Powell looks back on his career, gives the story behind some of his best-known photos, and talks a little smack.

ERNESTO MACIAS: How did you start taking photos?

MACIAS: Well, I want you to tell me.

POWELL: It’s a funny story. In a nutshell, it was out of spite. I had a girlfriend between ’83 and ’85 that I took around, and then she was in the arts program at NYU. She had cameras and shit, so sometimes we’d go out to Roxy’s or Danceteria, and snap pics. I asked her if I could try it a few times. It was a point and shoot. It seemed like people were comfortable when I went up and asked if I could take their picture. It was fun. Let’s forward to the spring of ’85. Man, it was a tumultuous relationship. She dissed me for some dude with tie-dye yoga pants and crystals. That spring I found this bag in my room. There was a little camera in there. It was a little Minolta AF1, and I started taking it out with me to clubs and art openings and started taking pictures with it. Then, boom, downtown magazines like the East Village Eye and Paper asked me if I’d like to shoot pictures for their club sections. I started seeing my photo credit under the photo, and I was like, “Wow.” So, I went from Joe Schmuck to Rick the downtown photographer overnight. Photography opened many doors for me.

MACIAS: It just worked for you.

POWELL: Totally. That summer, Futura put me on his softball team, the SV Beast Field. That fall I started hanging with The Beasties.

MACIAS: Besides the success in a career that you didn’t think about, what did you enjoy the most about taking photos of people?

POWELL: Well, taking pictures is fun regardless. If you want to be a professional photographer, then it’s kind of different. But as far as my favorite times, I like that whole second half of the eighties because a lot of shit was happening wherever you went. Then I got down with Def Jam, and they started hiring me to shoot their artists and tour with The Beasties. In 1990, I took it to the next level. I started a public access TV show. I wanted to bring the people I took pictures of to life. I started doing that. That was a whole other dynamic, being a “talk show host.”

MACIAS: I wanted to ask your thoughts on what makes New York, even in times of crisis like we are in right now, a perfect city to take photos?

POWELL: New York is considered this and that. I grew up here. I haven’t studied or trained in photography. So my thing is basically just hanging out and having my camera with me and just taking pictures of wherever I am. My work is kind of like one man’s time capsule when I was here. Whoever’s into it, checking it, great. Whoever is not, that’s fine, too. Consider it like my transistor radio. The playlist is infinite. Just step out the door—there are places to shoot, people, anything. When I get together with someone to do some pictures, I just tell them to meet me somewhere, and then we’ll go for a walk and talk. 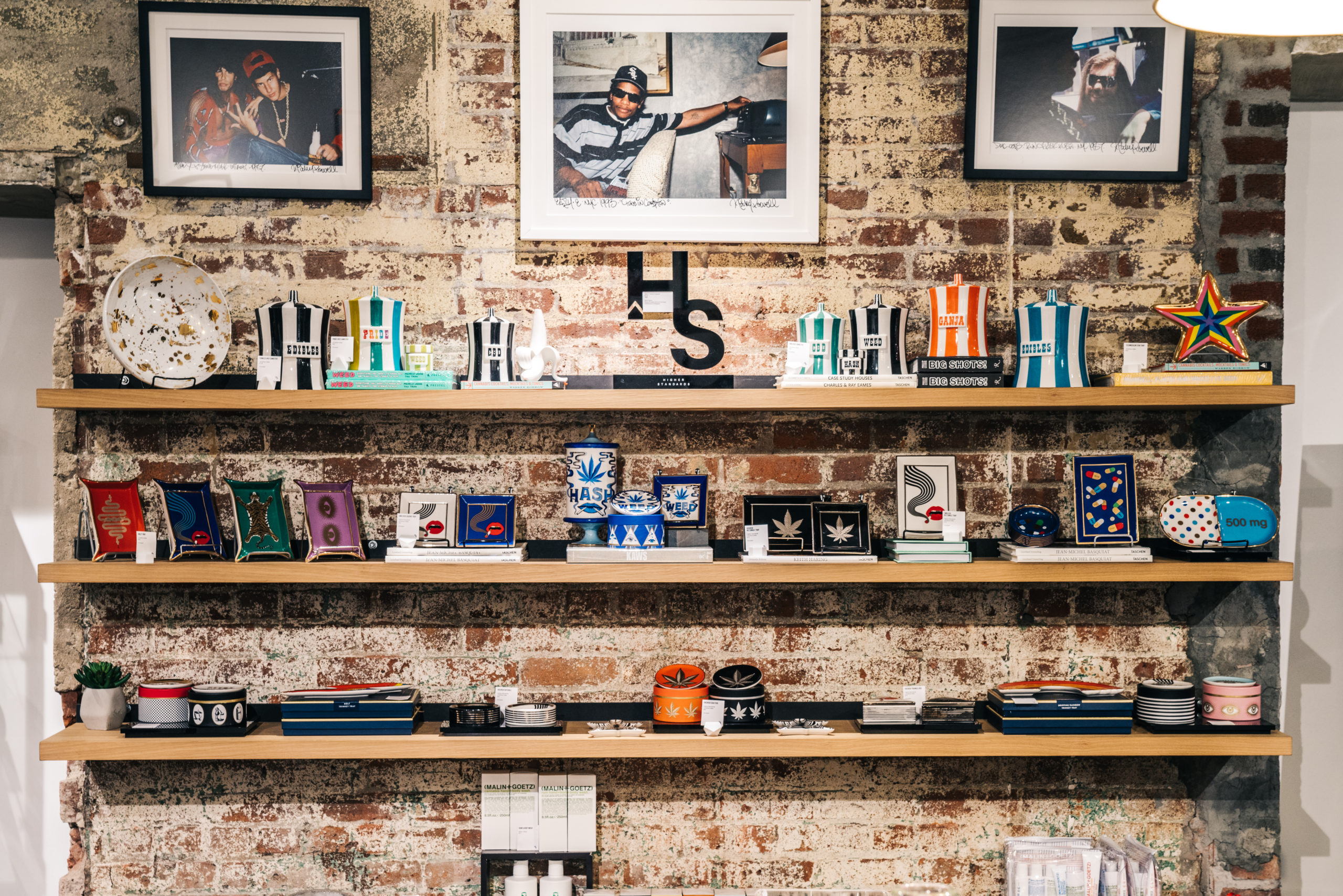 MACIAS: You were saying that you were just hanging out with people and taking photos, but looking back on your body of work, when did you realize, “I captured this moment that no one else did”?

POWELL: Well, anyone I take pictures of, I’m kind of a fan, to be honest. I’ve always had this analogy: To me, taking pictures of certain people is like collecting baseball cards when I was a kid. Like, “I want him or her or them in my collection.” This may be shocking to you, but not everybody is enchanted by me. So, the big question always was: to ask or not to ask? That’s an interesting moment right there, especially in the street.

MACIAS: I feel like there’s something to be learned about spontaneous moments, and I’ve been thinking, especially lately and since it is my first time coming into the city in a long time—what can people that are maybe feeling a little hopeless about living in the city right now maybe learn from images that you have taken?

POWELL: When people look at my pictures from the ’80s, they’re like, “Oh my God, shit looks so fun back then.” Generally speaking, since 2000, I’ve seen New York City get invaded and infested by cornballs. A lot of the cool, interesting people are gone. The jerkoffs replaced the cool authentic people.

MACIAS: Do you think the city will go back to being home for cool people like that again? Especially now, with the number of people that have left?

POWELL: I like how it is now, because a lot of jerkoffs have left the city. But I feel very bad for good people who have had their businesses jeopardized. I met this nice couple from Denver, and they just opened a restaurant in December. They just closed it down. I feel bad for the good people that came here to contribute. I’m sorry to see them go.

MACIAS: I saw some of the photos inside Higher Standards, and there’s this one of Keith Haring holding beer cans in a bathroom.

POWELL: That was 1986 at Irving Plaza. Keith used to be out and about, man. He was a big shot, but he was chill. I think it was either the first or one of the first pictures I ever had published of him with Futura and somebody else at a club. That’s him buying me a beer. I was sorry to see him pass away so young. I often wonder what guys like him and Basquiat would be thinking if they were around today. I think they’d be like, “Yo, shit is whack.”

POWELL: This whole movement with the wall murals and shit, I thought it was cool for a minute.  A lot of them are just in it for the fucking attention, and they’re catty. I don’t even look anymore, but I see the lineups of some of these group shows. I look at them and I’m like, “Oh my, God. Those two right there, they hate each other. They hate each other.” So, I’ve kind of made a proclamation that I’m done with the whole art scene, especially the younger graffiti art scene. There are a few people who I dig. MACIAS: Now this picture of DMC flexing in front of an ice cream truck, what was that about?

POWELL: That was Hollis, Queens, in 1987. Run DMC was doing a promo thing for MTV with The Beastie Boys because they were about to go to Europe on the Together Forever Tour. So, I went out there and took some random pictures hanging out. Run DMC was very comfortable with me, and I was very flattered because they were the biggest group in the world. They were very cool and very funny, and they had very good senses of humor.

MACIAS: Is there a favorite photo or moment that stands out for you?

POWELL:  Well, of the group I guess one of my most famous is the one of him in front of the Eiffel Tower. That’s one of my favorites, and I shot that really easy-breezy. We were on a day off. They took me to Europe with them for the month of May, and we were in Paris for three days. So I went along with them doing the tour shit, and then we were by the Eiffel Tower. It was kind of rainy, and I was just like, “Yo, yo, yo, yo. Just jump up on that ledge.” Trying to make them laugh and shit. Then they got up there, and then I took maybe five shots. “Okay, thanks.”

MACIAS: There’s also a photo of a dog inside a car with Louis Vuitton’s logo all over. It’s quite fabulous.

POWELL: That one’s in the summer of 1999. I went camping with this girlfriend I had. We got up one morning and then she was like, “Yo, I need some feminine products.” We’re in the middle of nowhere, dude. I walk maybe a couple of miles, and I finally found this rustic little general store. It’s like 7:00 in the morning and I’m just kind of taking it in listening to all the bird sounds and the nice feeling of the quietness and the fog. Then all of a sudden this fucking car comes with the fucking Louis Vuitton. This little old lady behind the steering wheel with a Husky dog sticking its head out the window. I was like, “What the fuck? Am I hallucinating?” Then she pulls up into the general store, and she gets out. I’m like, “Excuse me, lady, can I ask you a question?” She’s like, “Uh-huh.” I go, “What’s up with that car? How you got Louis Vuitton shit all over your car?” She was like, “Oh, my daughter works for Louis Vuitton. She hooked it up.”

MACIAS: There’s another one that caught my eye. It’s of Andy Warhol with Keith. I don’t know if you remember.

POWELL: That was at this function, an AIDS benefit at the Jacob Javits center in ’86. I was kind of standing outside,  doing the paparazzi thing with the other photographers. Two generations of pop art chilling together. So I took that picture, and then later on inside I went up to them while they were having a drink together. Keith said to Warhol, “Yeah, he’s cool,” and he let me take a picture of them having a drink.

MACIAS: A lot of people, especially young people, are looking back at that time period through those pictures and trying to revive it in a way. What do you think it is about those photos or that era that attracts so much nostalgia?

MACIAS: Is the coolness missing? For lack of a better word.

POWELL: I don’t know, but the ones that we get force-fed by the media and on TV and all this shit, they’re just fucking corndogs. I don’t want to name names, but across the board in music. I think that intelligent, young people are actually eager to know a little history and shit. There are a lot of cool intelligent young people, and those are the ones that I enjoy talking to.