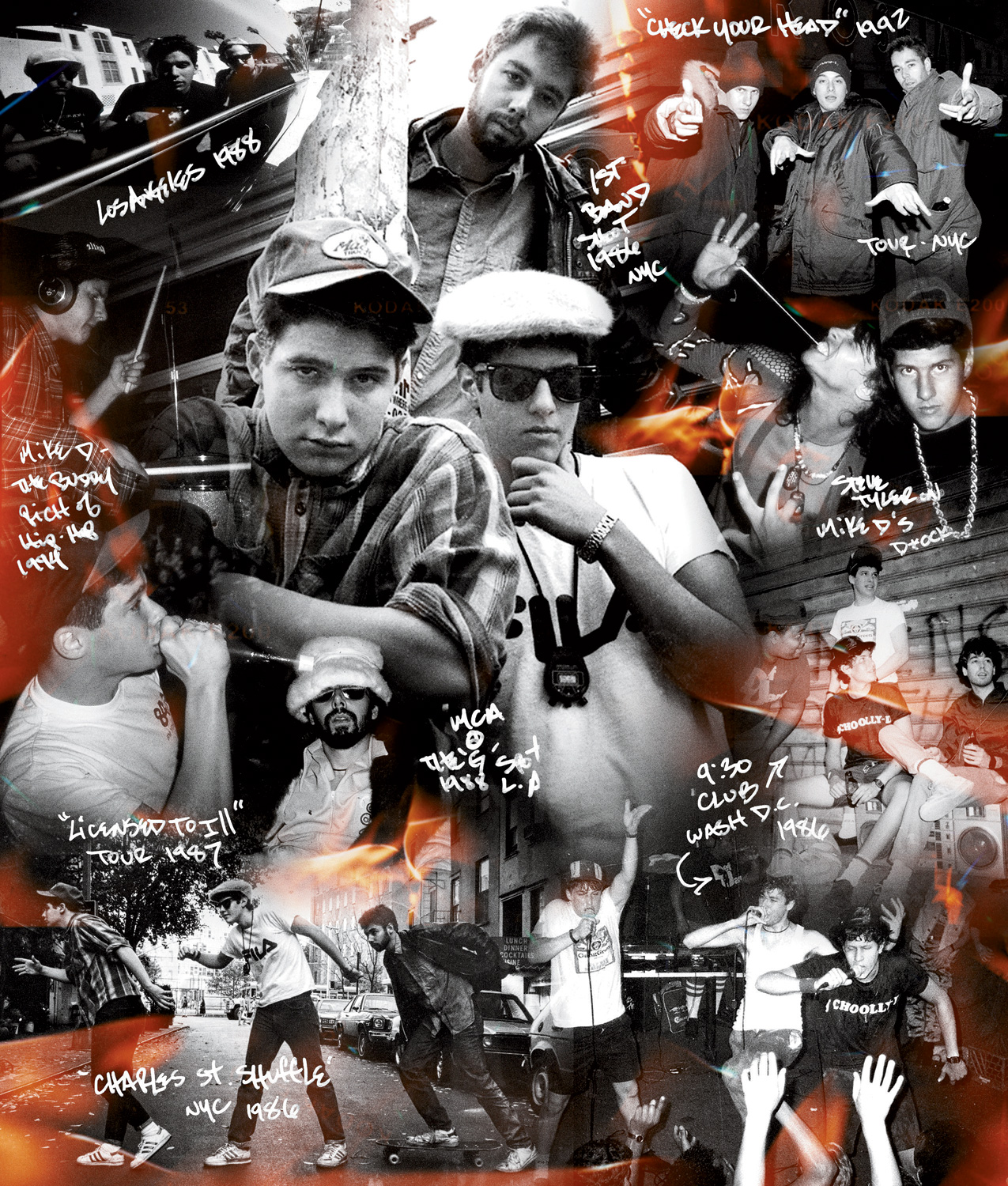 With the 75th anniversary of the iconic sunglasses manufacturer, Ray-Ban underway, INTERVIEW celebrates the NEVER HIDE moments of a few influential leaders in art, fashion, music and film. We’ve met quite a few characters over the decades, but here are some of our favorite interviewees and icons, artists who never shied away from marching to the beat of their own drum. Here we talk to The Beastie Boys:

The Beastie Boys should feel dated. Licensed to Ill, the Beasties most famous album, came out over 26 years ago. In terms of ’80s pop culture icons, the Beasties, with their Rick Rubin beats, flippant lyrics, and VW hood ornament necklaces, are rivaled only by the likes of Molly Ringwald and Run-DMC—and everyone knows that when you reach a legendary level so early in your career, it is hard to maintain the momentum. By the laws of former ’80s favorites, Adam Yauch (Ad-Rock), Adam Horowitz (MCA) and Mike Diamond (Mike D) should be desperately trying to resuscitate their career through reality TV and Twitter, not collaborating with Santigold and winning MTV Video Music Awards.

Somehow, the Beasties managed to stay current. In the ’90s they won over critics—those who thought the group was too immature to last—with their Spike Jonze directed music video masterpieces, such as “Sabotage.” These days, they still collaborate with Jonze (who also works with the likes of Jay-Z and Kanye) and finally received an invitation into the Rock and Roll Hall of Fame last December. Even their original styling remains 2012-appropriate—maybe not the VW necklace, but you wouldn’t look twice at a teenager or 20-something decked out in varsity or track jacket and flat-rimmed baseball cap.

We’ve met the Beasties a few times over the years and thought we’d track Mike D, MCA and AD-Rock’s maturation from punk kids to lasting icons through some of our favorite interview moments.

March 1987—Midway into the Beastie’s mayhem days, when the boys had a reputation for reeking havoc wherever they went. At this point the group had one album behind them, 1986’s Licensed to Ill, and another in the works (Pauls Boutique, released in July of 1989).

FAYETTE HICKOX: Who are your heroes?

MIKE DIAMOND: Those girls right there.

YAUCH: It was all right.

DIAMOND: She was nice.

YAUCH: She was our friend.

HICKOX: But didn’t she later trash you?

YAUCH: Dick Clark was dishing us on the show and—

DIAMOND: She stepped up.

HOROVITZ: She beat him down.

YAUCH: She put in.

DIAMOND: She checked in.

HOROVITZ: We want a competition between Joan Rivers and Dick Clark Productions…We want to have Capture the Flag.

April 1992—The month that the Beastie’s released their third studio album, Check Your Head, which would be nominated for a 1992 Best Rap Grammy. The Beasties are already being treated as old-hands, authorities of rap.

DIAMOND: It’s definitely at the point where if you go to a 7-Eleven, you will hear rap in some advertisement or another.

YAUCH: We just play whatever we’re into. For a while there, we weren’t listening to too much rap stuff, ‘cause there wasn’t anything interesting.

DIAMOND: It’s definitely a weird feeling watching the Super Bowl and at halftime they have this Las Vegas-style show where these little kids come out and rap.

HOROVITZ: That was some weird shit.

DIAMOND: It’s funny on one level, but I don’t know how I feel watching that. On the other hand, it doesn’t make a good rap song any less valid.

July 2004—Several months after the release of To The 5 Boroughs, an album heavily influenced by the September 11th attacks on the Beastie’s home city of New York, Russell Simmons interviews the trio. As co-founder of Def Jam records with Rick Rubin in 1984, Simmons is a long term friend of and mentor to the boys, a witness to their personal maturation.

YAUCH: [to Simmons] I remember the first time we came to your office to meet with you about being our manager, and you sat us down very seriously and said, “I’m going to say one thing: I’m not a baby-sitter!”

DIAMOND: That was your management speech. You were like [in Simmons’s voice], “I expect y’all to work hard!”  The funny thing was that the speech had nothing to do with what kind of person you were at that time. You’d think you were a hard-working, wake-up-in-the-morning type of manager. [everybody laughs]

YAUCH: I just remember that Full Force was in your office. I thought that was cool.

DIAMON: Kurtis Blow was there, too, break-dancing.

DIAMOND: People always as us this question like, “Oh, what do you think of hip-hop now?” basically looking for us to say, “Oh, hip-hop’s really wack,” or “Hip-hop’s not conscious enough.” But I feel like there’re always going to be hot records, just like there’re also going to be wack records.

RUSSELL SIMMONS: What’s amazing to me is that in the beginning, people would say to me, “Them white boys you got are a novelty.” Y’all wasn’t gonna be shit. But now you’ve hung out with the Dalai Lama, been with tons of women, traveled around the world, been rock stars. That’s some shit to think about.

HOROVITZ: I’m not clear where you’re going with this, Russell.

SIMMONS: I’m just saying that everyone was sure you weren’t gonna be shit.

HOROVITZ: Wow, thanks a lot, Russell.

SIMMONS: No, but what I’m saying is that y’all became great, y’all became history. Even when you die, people will be talking about Beastie Boys. What do you think about that?

SIMMONS: How old is your kid, MCA?

YAUCH: I have a daughter [with wife Dechen Wangdu]. She’s gonna be six.

August 2011—With the release of their eighth album, Hot Sauce Committee Pt. 2, and Adam Yauch’s recovery from throat cancer in 2009, the BBs reflect on the 30 plus years of their career.  Horovitz and Diamond pay tribute to the rebellious attitude that made them famous with a few of their famous friends—the video for Hot Sauce’s debut single, “Make Some Noise,” features a slew of celebrities including Kirsten Dunst, Orlando Bloom, Seth Rogan and Chloe Sevigny, essentially re-enacting Licensed to Ill’s most famous single, “(You’ve Got to) Fight For Your Right to Party.”

MATT DIEHL: You guys were recently nominated for the Rock and Roll Hall of Fame, but didn’t get in.

HOROVITZ: Part of me feels it’s better we’re not in the Rock and Roll Hall of Fame. We’re still a band, and what made us passionate about music is that we were the little punk-rock kids at school who were not into the prevalent popular music.

DIAMOND: I don’t think Devo is in the Rock and Roll Hall of Fame.

DIAMOND: The Sex Pistols turned them down.

HOROVITZ: That’s what I’m saying. If those groups aren’t in the Rock and Roll Hall of Fame, then why would we want to be in there?

DIEHL: Well, because you guys have been around so long, it seems like all of these people of different ages have their own connections with your music. We’re now talking about multiple generations of people who have discovered your music and grown up with it and had it become a part of the soundtrack of their lives.

DIAMOND: It’s what happens when you’ve been in the game a long time. We had to grow up in a very public way. Then all the people who started listening to us had to go through those things in their own way as they grew up. That’s the thing with all of us music geeks—music is the soundtrack to the things that happen in our lives, and there’s music that’s unique to that movie.

UPDATE: Since we posted the article, we are deeply sorry to say that Adam Yauch (MCA)passed away. Our writer’s Matt Diehl and Dimitri Ehrlich, who interviewed Yauch and the Beastie Boys for us over the decades, share their memories of Yauch.