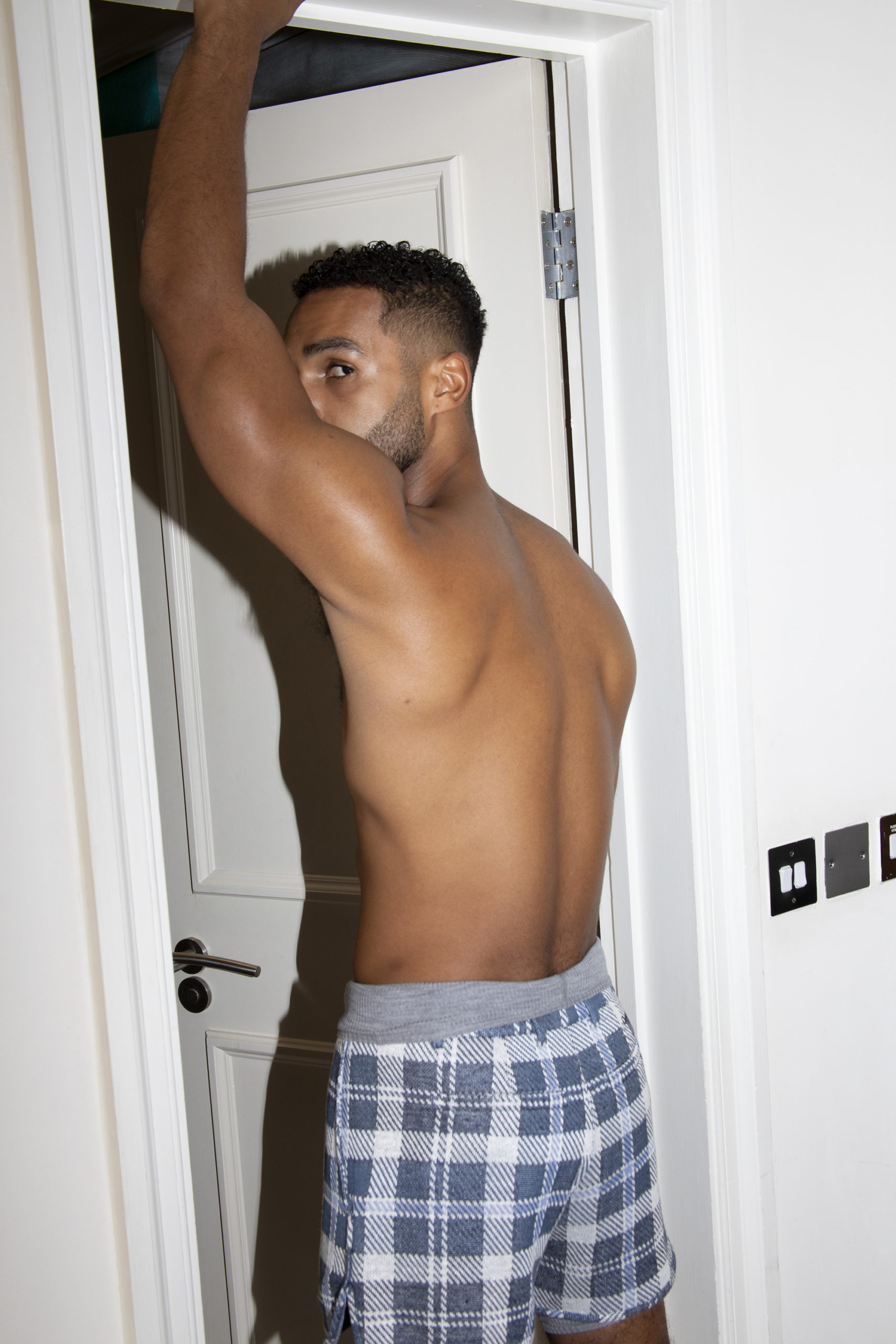 Boxers and Briefs by Dior Men.

The actor Lucien Laviscount takes his Emily in Paris costar Jeremy O. Harris inside his own private paradise.

HARRIS: I’m putting my camera on, I’m in a robe.

HARRIS: With my ring, because I’m celebrating the fact that I got engaged yesterday.

HARRIS: Thank you, now the pressure’s on you. I think your missus is waiting. You already call her missus.

LAVISCOUNT: Yeah, and I call you my hubby. [Laughs] I’m so happy for you, honestly.

HARRIS: When are you going back to your farm?

LAVISCOUNT: I’ve got a bit of work on Monday and Tuesday, which is nice, and then back to Antigua after that.

HARRIS: Can you give me a map of where Lucien Laviscount can be found on the globe at any given time when he’s not in Paris shooting Emily?

LAVISCOUNT: The idea of being contained in any one place frightens the hell out of me. My safe space has become Antigua. It’s the place where I can switch off and on at the same time. When you hit the ground running and everything’s coming left and right and up and down, there’s not that much time to grow. I need that sweat, that heat, that tropical thunder and everything that comes with it.

HARRIS: I love that. I don’t know how to turn off in a city, because you run into 50,000 people you know. What’s a day in the life there like? Top Stylist’s Own. Shorts by Raimundo Langlois. Watch by Omega.

LAVISCOUNT: It starts at sunrise, it’s a 5 a.m. wake-up—literally the roosters are roosting. I roll out of bed and throw on some trainers and hit the pavement. I head down to the beach and go for my morning swim, come back, and cook up a good breakfast. I’ve got either a podcast on or I’m jamming to some tunes. I like to get my workouts in first thing in the morning before the sun’s too hot, and then just reset. That might mean putting on an old movie or reading a book or doing some writing—just taking that time to do things that I would love to do, but always feel like I’m too busy to do. Antigua brings it out of me and I have different energy when I’m there. I want to be a better person. I went on a three-week vacation at the end of February 2020, that ended up me being down there for eight, nine months. It just transformed my whole outlook.

HARRIS: We met right at the end of 2020. We had both moved to different countries during COVID by accident and then we both ended up on this crazy show together.

HARRIS: Can you share with the world your favorite memory of hanging out with me on set? [Laughs]

LAVISCOUNT: My favorite memory was when I sent you the loveliest DM because I found out you were on the show and I didn’t get anything back literally until we had to be on set at the same time, and you said something like, “Yeah, that’s what’s up.” I was like, “Wow.” The amount of edits I did on that DM to you—

HARRIS: You don’t know how crazy it is to have a person who is as gorgeous as you slide into your DMs with a long message of admiration. You’re just like, “Wait, what? There’s no way that Mr. Ten-pack over here wants to say hi to me, let alone write me a letter.”

HARRIS: To see that it also affected you that I didn’t say anything was also crazy, and I was like, “Oh wait, he’s actually the sweetest guy in the world.”

HARRIS: People don’t know that about you. I think people hear your rough-and-tumble accent and they’re like, “Oh, he’s a cool London gangster,” and don’t recognize that you’re actually a big cuddly teddy bear who also is like the Energizer Bunny.

LAVISCOUNT: The Energizer Bunny thing kicks a chord for sure. That understanding of where to put that energy is so important. I take note of how you direct that, because you do it in such a special way that I’ve never really seen before. You’re still in the moment, but you’re moving a million miles an hour in the background. I still don’t have a fucking clue how you do it, but I want in on that.

HARRIS: I think everyone was around less when we were filming Emily in Paris this season, mainly because we had freedom. Last season they were like, “You’re in Paris, you’re in your apartment, you’re only with each other, and if you step outside of it, we will have to shut down the production and everything is going to go to hell.” We all got really close because we could only spend time with each other, but this year everyone was free to leave as soon as their scene was done, so I feel like everyone took a plane or a train the minute their scene ended for the day.

LAVISCOUNT: I’m on a show about Paris, I fucking love Paris, I fucking root for Paris—the people, the food, the energy, the streets, the good, the bad, the ugly, all of it. This season for me was finding that and finding my role in Paris, and I fucking flew, I loved it. The amount of people I met off the beaten track was pure joy.

HARRIS: I didn’t get to get all the tea about Alfie and Emily this season. The main question I have is, did you get that white boy out of her life?

LAVISCOUNT: He’ll be back. The chef ain’t leaving. It’s like when you seasoned up the dish so good, the next day you still got the season smell on your fingers. He’s always going to be there.

LAVISCOUNT: I love that.

HARRIS: Actually, I think the ideal would be the three of you guys.

LAVISCOUNT: I’m here for it, and I think that Lily [Collins, the lead of Emily in Paris] is a boss in her own right—Emily is, sorry—she’s juggling and spinning so many plates, she can handle it all.

HARRIS: I think the only thing Emily hasn’t conquered in Paris is polyamory. Shirt by Courreges. Shorts by CDLP. Socks and Shoes by Dior Men.

LAVISCOUNT: [Laughs] Listen, this season Alfie and Emily go on a deeper journey of figuring out what each other loves and what they want. Alfie gets the shit end of the stick a lot. I think he’s a nice guy that does the right thing. He’s a stand-up human being that knows what he wants and doesn’t deal with the bullshit. I’m quite similar, there’s no frills. I’ll tell you straight and I’ll say it with a smile, “I’m out, peace, go fuck yourself, respectfully.”

LAVISCOUNT: Alfie’s definitely got that about him, and the temperatures turn up this season. The range of Emily and Alfie’s relationship is tested to the point of no return. Darren [Star, the show’s creator] and the team do such a great job of keeping everyone on their toes. You get the script and you’re like, “Fuck, what’s going on next?” I read them back to front.

HARRIS: [Laughs] I’ve never been a part of something that has as big of a reach. The fan base for Emily in Paris runs very deep. When I was in Tokyo, I got to drink for free at a gay bar called Dragon Men because the bartenders were like—

HARRIS: “You’re Gregory from Emily in Paris.” When we were on the street in Paris, I think about 17 women went to the hospital because their necks kept snapping backwards to stare at you.

LAVISCOUNT: [Laughs] There’s so many people that do really, really treasure the show.

HARRIS: I watched Emily in Paris, it took me out of my reality, it made me feel free and alive and excited just to do something else again. It was a really delicious, amazing confection, and I have no idea how it was made so well. When you need something to make you feel good on the inside, what do you watch?

LAVISCOUNT: Are we keeping this PG? [Laughs] I watched Arcane, which is an anime, on Netflix recently. I’ve been sleeping on this shit. It was truly phenomenal. I felt all the feelings. I was on the journey with these two beautiful women, and they were strong, powerful bosses fight- ing against the world.

HARRIS: You know what’s so funny? I think I draw the anime out of people. I interviewed Thuso [Mbedu] and she ended up talking about anime too.

HARRIS: I’m going to not be able to do the phoners anymore, because every time I interview another actor I make them talk about anime, just by sheer will.

HARRIS: Well, baby boy, I miss you so much, I cannot wait ’til we hang out again.

HARRIS: Maybe we’ll see each other at the premiere.

LAVISCOUNT: Of course. We’ve got the premiere, and then Caribbean for Christmas, baby!

HARRIS: Let’s do it.