Kristin Bauer: The Lady Is A Vamp 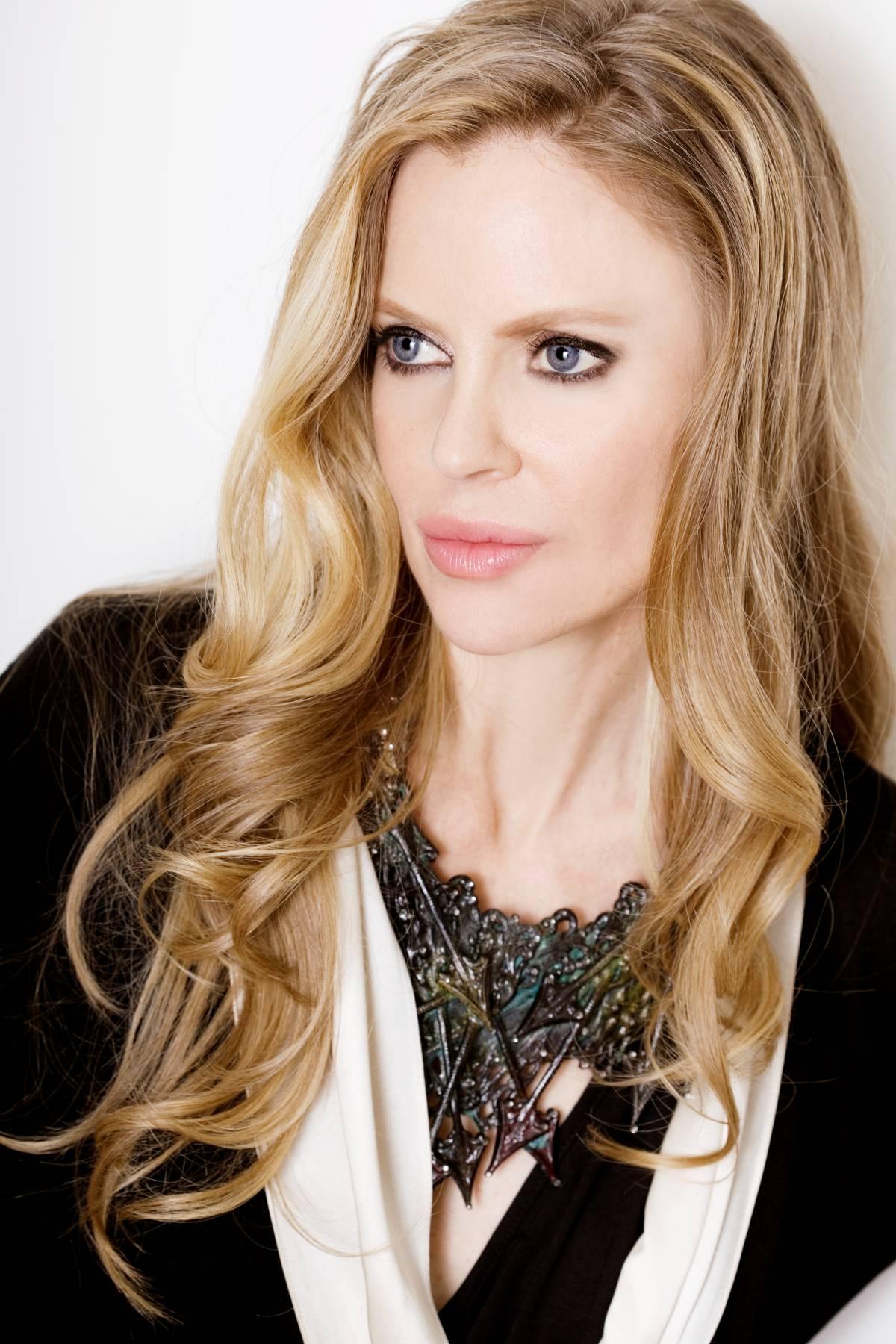 Anyone familiar with True Blood knows that the show’s borderline X-rated sex scenes are upstaged on a weekly basis by saucy Kristin Bauer (full name: Kristin Bauer van Straten), who plays vampire Pam to perfection. Season four, which concludes Sunday, September 11 at 9pm EST, has seen Bauer’s character shill for vampire rights, watch her own face rot off, and inspire an army of GIFs by warning foes that she will “personally eat, fuck, and kill all of you.” You can’t say that Pam doesn’t have her priorities straight.

Last week, Interview caught up with Bauer on the phone from her home base of Los Angeles. We asked her about costumes, Google Alerts, and hoping the dog doesn’t die at the end of Cowboys and Aliens.

JAMIE JOHNS: I have to say, I was very excited to see Pam back last night.

KRISTIN BAUER: Yeah, me too!

JOHNS: It was also pretty badass to see Pam about to really get her revenge for that face rot.

BAUER: Yeah, I know. I’ve been waiting for that the whole season.

JOHNS: Pam’s outfits and her quips just keep getting better all season. How much of a hand do you have in her clothes or the lines that you get? Do you ever improvise?

BAUER: No, I have no hand [in it] and no improvising. These guys are so amazing. The script comes, the lines are amazing and golden, and then I go to the wardrobe fitting and Audrey [Fisher, True Blood costume designer] is so incredible that if I’m even sort of thinking, “I’m not sure,” she’ll say it first. She’ll say, “Yeah, I think we can do better.” The writers—everyone on the show—HBO has really assembled these top-notch people, and each person is a perfectionist. So my job is to just not screw it up.
JOHNS: [laughs] You mentioned Audrey, the costumer designer. Has she ever given you something where you’re like, “Oh God, I don’t want to wear this. This is terrifying”?

BAUER: [laughs] No, she hasn’t. She’s more of a perfectionist than I am. She’ll put something on and I’ll think, “Wow, that is amazing.” And she’ll go, “You know, what if we just dressed it a little, and added some laces, and put on this ruffle, and move this?” And I think, “Oh my God, it was amazing when I put it on!”

JOHNS: So this season we’ve seen Pam go through some pretty taxing things. How long did the rotting makeup take to put on?

BAUER: Usually it was about five hours. The first one where I pull my face off, where Marnie curses me in the woods, that was a nine-hour test day and about probably seven hours in the makeup chair. So that was the longest one.

JOHNS: Wow. Did you get a lot of work done while you were in the makeup chair?

BAUER: [laughs] I was thinking I could watch something on the iPad, [or] I could talk on the phone, but you can’t because you’ve got three men just working on one side of your face and a hand, and you have to keep moving so they can get different parts. You talk for a little bit and then you realize you’ve been quiet for like an hour, and then a funny thing happens where they almost forget you’re there. You’re just props that they’re decorating. And it’s a really bizarre relationship that you have with these people that mess with your face for hours.

JOHNS: Did you have any knowledge of the True Blood books before you started playing Pam?

BAUER: I had no knowledge of them. One of my main techniques for acting is I try to know almost nothing beyond the words that I have to say, because that’s my zone of control. I have a couple of really good friends who know all the producers, what they’ve done, and who’s going to be in the room. I can’t survive mentally if I know that. I just have to do my part and let the universe take it from there. I did know HBO, Alan Ball, and vampires. That was more than I needed to know to be very excited about if I could ever do this role. So then I got the dialogue and got kind of a concept of her, and just went in and winged it. And then they hired me.

JOHNS: Are we ever going to get to see Pam’s back story? Because every week I feel like we get a little morsel—

JOHNS: Like we know she has a Southern accent but she speaks Swedish, and we know she’s about 100 years old, but are we gonna get to see that?

BAUER: You know, Alan said that we will. At Comic-Con or at one of ‘em somebody asked and he said, “Yes.” I think Alex [Alexander Skarsgard, Eric] at the Paley Center said, “One thing I’d like to see is that flashback.” And Alan said, “You will next year.” So I’m really excited about that, because the only information I have is what you have.

JOHNS: Speaking of Comic-Con, you’ve been going now for how many years?

BAUER: I just did the last two.

JOHNS: So what is that like for you? Is that kind of surreal to have people treating you like you’re Pam?

BAUER: It is. It’s intense, it’s surreal, and it’s also fun. You feel a bit like a rock star. Because the way that we work, with no live audience, we are in a bubble. And we are pretty much done with filming before they air…there’s a little overlap. You know, the reality that you’re making something that people are going to see and like or not like isn’t on the set. We’re just creating stuff with our buddies. So to actually show up in a place where those fans are and to see the reaction and to look out in that room is—someone said it’s like a Beatles moment. You know, The Beatles are much bigger, but it’s the closest I’ll ever come.

JOHNS: Do you ever do a Google search, or try to read the fan sites dedicated to you?

BAUER: Yeah, I have, because I figured out that there’s Google Alert[s]. Mainly, I think, how I end up there is when a fan posts something on my Twitter or my Facebook page. So it’s sort of a protected way to do it.

BAUER: Fingers crossed! Yeah! The first year I looked on one of the sites and I just looked to see if they were talking about Pam. So I put in “Pam” in one of those True Blood websites and it came up with pages talking about Pam. And I thought, “OK, then walk away.”And then I just saw, “Doesn’t Kristin Bauer look like Angelina Jolie?” And I thought, “Oh my God, that’s so good.”

BAUER: So I clicked on it, and the response was, “No, Kristin Bauer is blonde and heavier.” And I was like, “OK, I’m done!”

JOHNS: When you’re at Comic-Con or red carpet events, do any of the celebrity fans of the show come up to you and beg you for insider information and stuff?

BAUER: I have exchanged some love with some other shows. The Battlestar Galactica people, I went over and said, “I have to tell you guys—” And they said, “Oh my God, I’m so glad you came over! I’m in love with your show and just wanted to tell you!” And we had Chevy Chase’s wife come running over at Comic-Con and go, “I had to tell you, I’m just in love with your show!” And then we hear through people…I believe Stephen [Moyer] and Anna [Paquin] went to the White House and Obama had come into the Oval Office one day and said, “Is anyone watching this show True Blood?” I guess he had watched it the night before.

JOHNS: That’s a pretty great image, to think about True Blood in the White House.

BAUER: Isn’t it? He comes in on Wednesday morning before dealing with whatever crisis…the stock market crashes. “First of all…what the hell is with Pam’s face?”

JOHNS: [laughs] You know, that’s his first priority in the morning.

JOHNS: If you had to be a vampire, werewolf, witch, or werepanther—although I don’t think anyone’s going to pick that one—which one do you think you would be?

BAUER: [laughs] You know the amazing thing is that if I could be anyone on the show, I’d want to be Pam. The vampire world is so cool. I’m just so vile. I’m just ridiculously vile. And then I think of all the vampires—I love that Bill has such a human side and he’s always battling with the vampire and human side. I love that Eric is this Viking vampire God, as Pam says. And of course, Jessica is just an endless delight, to have this baby vamp. But Pam, the most unapologetic vampire of them all, for me, is the most fun to play.

BAUER: Right? I love that. I have more admiration and respect for her every year.

JOHNS: Outside of True Blood, you’re involved in a bunch of animal charities—I know you did a True Blood charity concert. Because you’re really into animals, does any of the blood and gore ever get to you?

BAUER: I only worry for the dogs. I can watch endless humans get killed, but if I see a movie and they kill a dog, I practically want to walk out. I was so happy; I just saw Cowboys and Aliens—

BAUER: I won’t spoil the movie.

JOHNS: They saved the dog in it? I haven’t seen it, but you can spoil it for me.

BAUER: They did. Yeah, you think for a minute the dog has been killed, and I thought, “Oh my God, I’m really enjoying the movie and I’m going to have to hate it,” and nope, the dog is fine.