John C. Reilly Explains It All 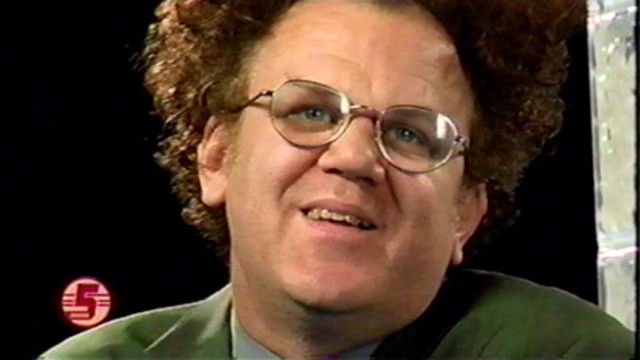 ABOVE: JOHN C. REILLY IN CHARACTER AS DR. STEVE BRULE

“You wanna see Andy Kaufman?” Tony Clifton once memorably asked. “Anyone got a flashlight and a couple of shovels?”

We’ve been thinking a lot about Tony Clifton, Dr. Oz, and performance art since we spoke with John C. Reilly about his insanely bizarre discovery Dr. Steve Brule. For those unfamiliar, Brule is a ridiculously inept “Doctor,” ostensibly hosting a pre-dawn cable access show, where each episode he learns about the most general concepts of human life: money, relationships, family, and yes, boats. It’s a spinoff from the equally deranged Tim and Eric Awesome Show, Great Job!, but Reilly is the man pulling the strings behind the curtain. Check It Out with Dr. Steve Brule began its third season last Thursday on Adult Swim. As Reilly told us, exposing too much of the process would spoil the fun, and we agree. We also believe him when he says that Brule is not a prop for snark or misanthropic comedy, but an honest, completely anarchic extension of Reilly’s early love of Monty Python, lust for mischievous fun, and ever-growing improvisational perfection.

DREW FORTUNE: Thanks for taking the time. I know you’re a really busy guy.

JOHN C. REILLY: I’m very busy. I had to make breakfast for myself this morning. I had a cup of tea. [laughs] I’m still in my pajamas and slippers. Very busy. Thank you for your interest in the show. We’re trying to get more people to know about the show.

FORTUNE: Well, it’s such a strange show, I have to imagine it’s kind of a tough sell.

REILLY: It’s not a hard sell once people see the show, but there’s so much stuff out there that it’s a challenge to get people to notice it. The thing is, I could go on big, mainstream talk shows, but part of me feels like most people are not even gonna want to see the show. [laughs] But, we’re trying to reach everyone who would want to see it, which is people who are into weirder stuff, but that’s a lot of people. I just remember when I was a kid and I saw Monty Python for the first time. Monty Python was not for everyone, but for the people that loved it, it spread like wildfire. So, we’re trying to spread the wildfire for Brule.

FORTUNE: Can you tell me about the origin of Steve Brule?

REILLY: He is a spontaneous creation. The whole show is improvised. The character is improvised. It’s a manifestation of freedom basically. I met Tim and Eric when they were doing Tom Goes to the Mayor, and I did a voice on that. Then they said, “We’ve got a new show we’re going to be doing called Awesome Show. Do you want to do something on it?” And I was like “Yeah! I’ll just come in and start doing something on the green screen, and that’ll be it. They had those characters Jan and Wayne Skylar on Tom Goes to the Mayor and it just struck me as really funny; a married news team. So I said “I really love the married news team, why don’t I do something in their world for the new show?” And they were like “Great!” We just started filming it, kept doing it, and it kept being fun. The character has kind of transformed over the years and now here we are. Season Three.

FORTUNE: With Check It Out, are there a lot of botched takes? How do you know when you’ve nailed it?

REILLY: I don’t know, man. To tell you the truth, I think that kind of spoils the fun. One of the beautiful things about the show is that it’s this unbelievable mystery that it even exists. [laughs] Like, how could someone let us do this? The fact that it’s as weird and disjointed as it is, it’s kind of a beautiful mystery. I’m hesitant to talk about it, but I will say that we shoot a lot. We shoot enough footage for 30-minute shows, and the shows are 11 minutes. It’s a very concentrated stew. The show is almost all improvised, other than the conceptual things that we come up with for what the show is about. It’s improvised when I interview the people as well, because they are real people. They’re not actors playing doctors and astronomers. They’re people who really do those jobs so they come in, and a lot of them are not that familiar with the show. They might have heard of me as an actor, and they’re like “Yeah, I’ll come on and talk about child psychology!”

REILLY: We give them some basic guidelines of what the show is, but then I don’t talk to them as myself. No one tells them about what is going to happen, and we just go and improvise. I think the show has a really honest quality as a result, and the awkwardness and weird, funny situations are a part of that.

FORTUNE: I’m 32, and I’ve found that some of my friends are completely baffled, or they get what you’re going for immediately. It’s kind of like Tony Clifton in that sense. Do you enjoy walking that tightrope?

REILLY: Yeah, I don’t care if people hate it. I like that some people hate it or don’t understand it. That means that we really went for it in some way. This show is not designed to be like oatmeal, that everyone can enjoy. [laughs] It’s designed to be like an extreme flavor and some people get it, and other people, you can’t explain them into enjoying it. [laughs] It just is what it is. It’s like the Monty Python thing when I was a kid. My parents were like, “What in the hell is this? Why are you watching this? This is wrong. This doesn’t make any sense.” I couldn’t explain why I liked it. I just immediately knew this is the greatest thing ever. It’s embracing chaos and absurdity. That is an acquired taste, but there’s a lot more people out there than you realize that are into that. It’s not just hip people in their 30s. There’s people of all ages, young kids and older people that… I don’t know. It’s a mystery why certain people find certain things funny. It really touches a nerve with a lot of people. I think one of the reasons that a lot of people are responding to the show and the character is that there’s a lot of cynical humor out there right now. The characters are all kind of smug and sarcastic about everything. They have a very world-weary attitude about everything. For all of Steve’s [laughs] shortcomings, he’s a really sincere guy. He really loves the things he loves. There’s a heartfelt quality to the character that I really have in common with him. I’m not a snarky person. I’m a person who likes genuine things instead of shitting on the world all the time.

FORTUNE: Do you have a favorite Brule’s Rule or Check It Out episode?

REILLY: I thought “Horse,” from this season, was really a good one. I love them all. There’s stuff I don’t like of my work beyond the show and beyond the character. When I look at movies I’ve been in, the stuff I don’t like is when I’m like, “Ahh, I was faking it right there. That moment was false.” There’s no false moves in this show, because I’m just thinking on my feet the whole time. The people I’m talking to are all real, with real occupations from real life, so the stuff we get is really in the moment and real. But, I like the “For Your Wine.” That was a good one. A lot of people mention that one a lot. To tell you the truth, most of the stuff I’ve only seen once or twice. I don’t go back and watch. As an actor, that’s a hard thing to do. I’m looking forward instead of back.

FORTUNE: When you switch into blockbuster mode, with Wreck-It-Ralph or Guardians of the Galaxy, do nerves still kick in? That goes for drama, too.

REILLY: Yeah. I think that if you’re not a little bit nervous about what you’re doing, then you’re not trying hard enough. You can call it nerves, or you can call it focus. I feel really lucky to be working with Tim and Eric because there’s a comfort level there, and we all know how to work with each other. For the first couple days when you start a movie, you have to learn a whole new way of working, what the director’s like, how they talk about the work, while discovering the character. With Wreck-It-Ralph, we made that over the course of two years, and with voiceover stuff, it’s so easy to do another take, that it’s a very relaxing day at work.

FORTUNE: Where do you get your greatest joy? Comedy or drama?

REILLY: I get the greatest joy from just doing anything, being an actor, you know? Doing music, and doing what I love to do. I don’t make a huge distinction between comedy and drama. I think the whole point is just trying to be as honest, from moment to moment, as you can be. If you’re honest about the material, and the material is ridiculous, then you’re in a comedy.

REILLY: A perfect day is no automobiles, good food, and my family.

CHECK IT OUT WITH DR. STEVE BRULE AIRS THURSDAYS ON ADULT SWIM.