The planets are aligning for Emma Chamberlain, the YouTube pioneer whose ascendance has been so 21st-century perfect that it was written in the stars. That’s why she’s about to get her birth chart read by astrology’s first lady, Susan Miller. What’s next for the 21-year-old mogul in the making? Quiet everyone, the charts are ready.

SUSAN MILLER: I’m ready, but I can’t see you. Is it supposed to be that way?

EMMA CHAMBERLAIN: I don’t go on camera on Zoom anymore because I really don’t like looking at myself.

MILLER: Oh, alright. Hello, Emma. So happy to meet you. I’m Susan Miller of AstrologyZone.com, the site that I started in 1995. You gave me your birth information, and you were born in Burlingame Hills, California. That sounds beautiful. I don’t know where that is. Is that near L.A.?

MILLER: Have you ever had your chart done?

CHAMBERLAIN: I’ve used an app, but I never really understood it. 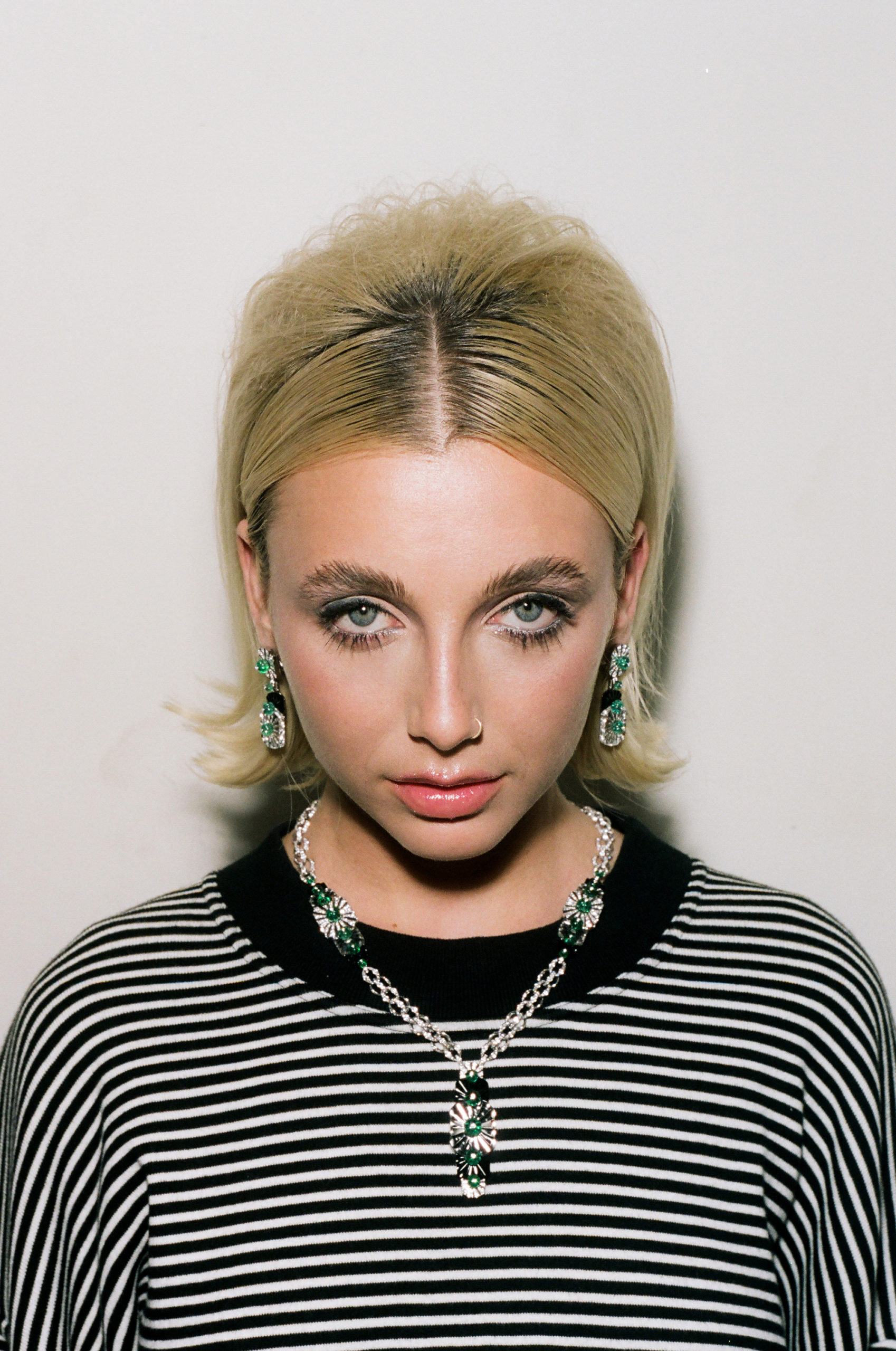 Top by Celine by Hedi Slimane. Earrings and Necklace by Cartier. Nose Ring (Worn Throughout) Emma’s Own.

MILLER: Oh no, no, no. Those apps are like cookbooks and they lead people down the wrong path. You really can’t do your own chart. You should have it done first, and then you get to know your planets. I will tell you all of them.

CHAMBERLAIN: I love it.

MILLER: You should be a very good writer. Someday you’ll be writing books. I’ve heard you’re very well known for storytelling and the best storytellers are Sagittarius. You have Mars in Sag and you have Pluto in Sag.

CHAMBERLAIN: Oh my god, I actually have chills because I’m somebody who’s very hard on myself.

MILLER: You have to just come to me more. [Laughs]

MILLER: You’re hard on yourself. You were born with Saturn in conjunction with the moon. Your mother—well, it could have been your father, too—they always wanted excellence. They stressed good work ethic, but maybe a little too much. I’m not sure, because you are such a careful writer. You think before you put anything on paper.

CHAMBERLAIN: It’s interesting hearing this because one of the things I consider myself good at— and there’s almost nothing I consider myself good at—is my communication skills. As for my parents, they were never very hard on me when it came to getting straight As, but they did want me to excel when it came to creative endeavors, and also just general morality and intelligence. If I made a grammar mistake, my dad was like, “Actually, it’s this.” Jacket and Skirt by Ambush. Goggles from Palace Costume. Rings by Cartier. Shoes by Manolo Blahnik.

MILLER: That’s like having a teacher in the house. By the time you got to college, you had it down pat, right?

CHAMBERLAIN: I didn’t even go to college, but by the time I was that age, I was seriously—it was important to have parents that wanted me to be excellent, because it did inspire me.

MILLER: Well, you have five Gemini planets. Three of them are in the house of creativity.

MILLER: Two of them are in the house of work projects. You’re never going to run out of people coming to you and saying, “I’d like to give you some work.” All your life, you’re not going to have to look for roots and berries. They’re right there in your garden. And look at what you’ve done in such a short time. You’re really young and you’ve become so famous on your YouTube channel. When did you start that?

MILLER: Your money is always going to come from digital.

MILLER: Now your rising sign. Capricorn. This is really unusual. I didn’t expect it. Capricorns are excellent with money. They’re conservative and cautious. If I gave you my wallet, you would put it in a safe place. You wouldn’t go through it. You wouldn’t spend it. You can trust a Capricorn to the end of the earth. And Capricorn is the sign of the wise leader. Pluto called Capricorn the philosopher king who took good care of people in their employ, and didn’t just lay off people or fire them. Here’s very good news: People with Capricorn rising or who are Capricorn tend to live to 100 or more. Dress and Bra by Loewe. Earrings, Necklace, and Ring by Cartier.

MILLER: Betty White was a Capricorn. She lived right up until almost 100. But if you look up Geminis online, the movie stars, they all look younger than they are. Their mannerisms and their interests are young and vibrant. They’re interested in everything. That’s you. You love news for the sake of knowing. Now with Uranus in the house of money, your money comes in chunks. Nothing, then a lot, then a little bit, then a lot. You would never work for a company, punching a clock every day, because you are very entrepreneurial. Do you ever want to get married? Because I can describe your marriage partner.

CHAMBERLAIN: Oh my god. Yes. I do want to get married.

MILLER: A real family man who loves children, loves food, loves cooking, has a tender heart, who cares about people. Cancer is on the cusp of marriage. So you need someone kind, a Cancer type and—

CHAMBERLAIN: That’s who my dad is!

MILLER: Are there twins in your family? Because you have three planets in Gemini in the house of children.

CHAMBERLAIN: I have cousins that are twins. MILLER: Well, you might have twins, but the first one seems to be a girl. You tend to have girls, but I could be wrong about that because I would have to look at your partner’s chart.

CHAMBERLAIN: I have a lot of girls in my family. All of my cousins on the other side are girls. Except for one.

MILLER: That’s so nice. And now, what’s coming up for you: We have a bit of a monster moon this month. I don’t like to tell people, but this one is so stormy. When a moon is in an angry state, she’s trying to cleanse. It’s almost like the universe is standing back watching what’s going on. But you will get along great with this full moon, it will really benefit you. We have one other monster moon this year, November 8. It’s an eclipse, and it’s a full moon, and it’s right on election day.

MILLER: I showed a friend who’s older. He’s in his 80s, a very famous astrologer. Used to have a show on television. He said, “Oh my goodness, the side that doesn’t win, people will be throwing rocks and tomatoes and get really upset.” It’s not going to be anything that anybody’s expecting.

MILLER: Don’t go out that night. Stay home and watch the returns come in, because you will love it. But everybody has to vote. It doesn’t really matter who you’re for. Just get your voice in because it’s so important these days. But now, oh, I have something else to tell you. I wrote this on AstrologyZone.com. This month Mars is doing something very different. Now Mars is a planet of action and energy. He’s the little action hero.

MILLER: Usually he stays in a sign for six weeks. It’s almost like having 20 cups of coffee in the house that he’s in because he’s so active. He really makes you focus on it. The ancient astrologers call him the timekeeper of the zodiac because he tells you what to think about. Well, he’s not staying for six weeks. He’s staying in Gemini for seven months.

MILLER: You are going to be in the headlines. You’re taking on something new besides all your work that you do with the coffee company.

CHAMBERLAIN: There’s a few other things going on that I’m keeping a little secret.

MILLER: Sign contracts this month. Next month, Mercury will be retrograde. From September 9 to October 2, I won’t let you sign contracts or buy any electronics or machines with moving parts, because Mercury rules that. You have to wait.

CHAMBERLAIN: Okay. One question I have is just based on my chart. I feel like I’m in a spot in my life where I’m trying to figure out what types of friendships work for me.

MILLER: Well, you have been disappointed with a few friends. Like on May 16, the eclipse. Top and Shoes by Celine by Hedi Slimane. Stockings by Wolford. Earrings and Necklace by Cartier.

MILLER: You’re wondering if they want to hang out with you so that they could be famous too. Princess Diana had that problem. It’s a process you have to go through, but you’re getting a better radar. When you have a bad patch, you find out who your friends are. Any kind of life change you go through—if you go to a new city or take a new job or have a baby, you need some support from people. And if they’re forgetting about you because you made a change, that’s so disappointing. That’s the November 8 eclipse. If there’s a friend who betrays you or says things about you behind your back, you find out about it. The eclipse is trying to help you.

CHAMBERLAIN: I have a question about what signs I am the most compatible with when it comes to—

MILLER: Oh, definitely Gemini, Libra, Aquarius, but also the fire signs, Aries, Leo, Sagittarius. But too many people use astrology like a cookbook. I’m not going to go out with a Scorpio because I don’t have any Scorpio, but he may have Gemini rising.

MILLER: My advice is always give the person a chance until you see something that worries you. Then you can start digging a little deeper. I don’t want to stop love. There’s something that brought you two together in the beginning.

MILLER: Now, Jupiter was in Pisces last year and you made great strides in your career. The day before Thanksgiving to December 20, I want you to socialize. Do anything you like, because your career is going to hit such high points, it’s the highest you’ve ever seen in your life. And it is spectacular. I would love you to launch something then because you’d get so many good reviews. And it’s only for two months, and then it goes away for 12 years. So you really have to do something.

CHAMBERLAIN: I’m going to strike while the iron is hot.

MILLER: You’re very focused. Some kids just don’t want to go to college. Look, Bill Gates dropped out. Steve Jobs didn’t finish. They got bored. They knew what they wanted to do, and I have a feeling you’re like that.

CHAMBERLAIN: Yes. I feel so amazing and excited about life after this. Thank you so much.

MILLER: I’m thrilled to meet you. Oh my goodness. I love your Instagram. I’m following you now.

CHAMBERLAIN: Yay! Thank you. I can’t wait to talk more astrology with you someday soon.

MILLER: We will. We’ll have a lot of fun and we’ll drink some of your coffee when we meet.