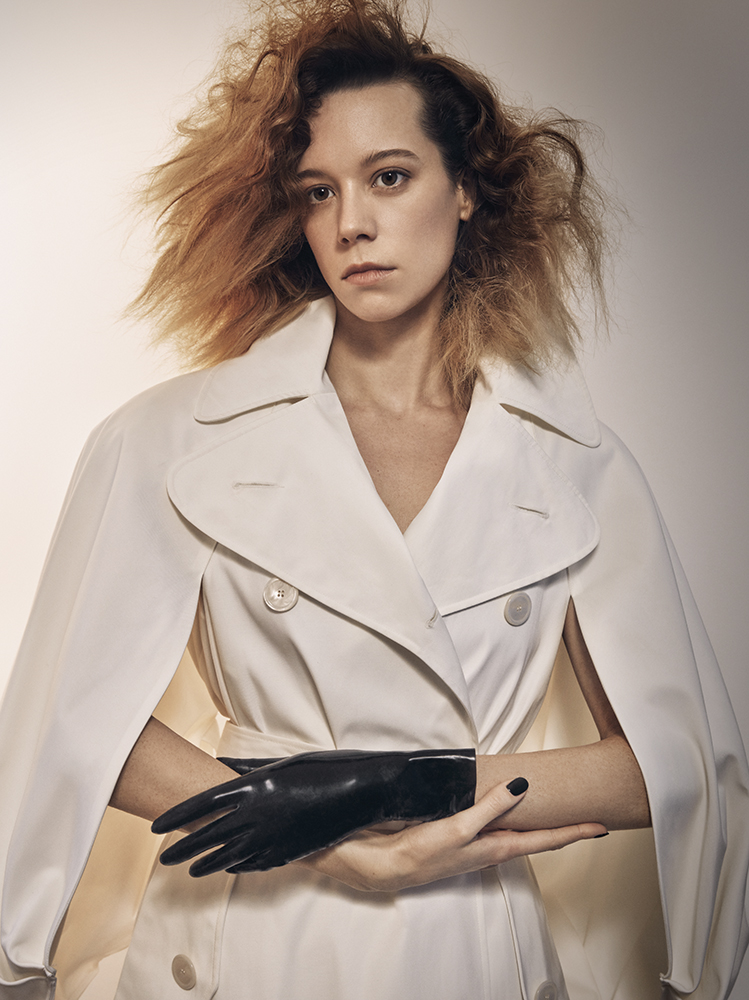 When Chloe Pirrie was cast as Emily Brontë in the BBC’s To Walk Invisible, she immediately turned to Wuthering Heights. “I’d read it as a teenager,” the Edinburgh-raised, Guildhall-trained actor recalls over the phone. “I remember it feeling like quite a romantic story in parts, but when I re-read it, I was like, ‘This is nuts!'” We talk about the pivotal scene in the book in which Heathcliff explains his plan to be buried next to Cathy, the object of his infatuation. He has asked that the sides of both their coffins be removed, so that their bodies might “dissolve” together. “It’s so dark,” Pirrie exclaims. “The brutality of the world is so intense,” she continues. “Emily writes about obsession and kind of psychosis—these people that are all so horrible to each other—and yet there’s this passion that runs through it, there’s this intense love. It was like nothing I’d ever read before. Reading it at the time it was published would’ve been a slap in the face because it’s so nuts. Then the idea, of course, that it was written by a woman, which they later discovered, must’ve been completely impossible to deal with.”

Airing tonight in the U.K., To Walk Invisible explores the reality of the Brontë sisters—from their poor Yorkshire upbringing to their tumultuous relationship with their wayward brother Branwell. Acting alongside Pirrie are Charlie Murphy as Anne and Finn Atkins as Charlotte, as well as Jonathan Pryce, Luke Newberry, and James Norton. To Walk Invisible is by no means Pirrie’s first prestige television piece: last year, the Scottish actor played Julie Karagina in War & Peace and appeared in the multinational Last Panthers. The year before, she starred opposite Brian Cox and Tom Hughes in the Cold War spy drama The Game. One of her most recognizable television roles is probably as a young politician in Black Mirror, but that will soon change: when we spoke last week, she had just finished filming the second season of Netflix’s Queen Elizabeth II drama The Crown. Then, of course, there are her indie films, including 2012’s Shell, which she considers her breakout role, and Paolo Sorrentino’s Youth, “an amazing experience.”

AN ACTING ANOMOLY: [Growing up,] I didn’t know any actors. Both my parents have creative personalities in some ways, so I can sort of see where it comes from, but not in a direct way. There might be the odd person in my family who was an artist down the line, but no one in my immediate family is an actor of any kind.

CHOOSING A DRAMA SCHOOL: No one around me was applying to drama school, so it was a bit of a lonely endeavor. I auditioned for basically every school I possibly could. The first year I applied, I was very, very young; I would’ve been 17 when I went. I didn’t get in the first year that I auditioned, although I got enough recalls and I got a reserve list place at Guildhall, so I still had enough hope that I thought I’d try again. I worked in a café and applied again and got in. It was a very long process and quite traumatic, as I think anyone who’s been to drama school will tell you. When I got in, I was so ecstatic and so happy. I felt like I’d found my way and proved everyone wrong, to some extent, who’d doubted that I’d be able to do it. It felt like people believed in me, finally, to do this career that no one else around me was tackling.

AFTER GRADUATION: I was inspired to become an actor from theater I’d seen, so I assumed I’d do a lot of theater. But when I left Guidhall, the first thing I did was a short film—I played the main character. And I loved it. I love working on camera. I love the smallness of it and the detail and the routine of it. I love theater as well, but I feel like I’ve been chosen more by film and television somehow.

THE BIG BREAK: Shell [2012] was a huge opportunity. It was a miracle job, really. Lots of people went in for that. I thought it was amazing but that I’d never get it. Then I underwent this very, very long casting process with it. At one point I was told I hadn’t got the job, but then it went back. It was kind of the keys to the kingdom, really—my first big film job and I was playing the lead, the titular character. I won this Newcomer Award at the BIFAs and the film got a lot of recognition. I don’t think I’d be where I am now without having done Shell. It kicked off things for me.

PERCEPTION VERSUS REALITY: People look at your CV and assume you jump from job to job to job. They don’t see the months in between where you’re waiting for the phone to ring or you’re waiting to hear about things. I was waitressing until about two or three years ago, and that was a big moment for me: “Oh my god, I don’t have to do another job anymore. I can relax for a little bit.” But I still live in slight fear of having to go back to a second job because it’s such an unstable profession. You think you’re getting somewhere, but especially if you’re doing a lot of indie films, you’re not getting paid very much. There can be times when you’re working a lot but you’re not earning very much and times when you feel more stable, but the fear of unemployment never really goes away for me. I also read that Judi Dench never stops worrying about being unemployed, so I feel like that’s just something you have to live with as an actor—uncertainty.

THE SECRET LIFE EMILY BRONTË: There’s this thing that [To Walk Invisible writer-director] Sally [Wainwright] talked about a bit: when her sisters died, Charlotte didn’t re-write history, but tried to put a color over her sisters’ lives. It was out of love, I suppose—wanting to preserve their memory in a positive way, which is understandable. It was interesting to approach Emily as a character because there are so many conflicting ideas about whether she was a complete introvert or whether that was just a perception that people had. We reached the conclusion that in the confines of her own home and environment, she would be quite free. There’s a context in which Emily feels very, very free—when she’s walking through the landscape and when she’s with the dogs and when she’s with her sisters. Then, when she’s interacting with the outside world, we decided that she might find that a bit more difficult. We tried to follow the drama with all the aspects of her personality rather than deciding that she was this hermit-like introvert who couldn’t cope life, which might be true in some aspects, but there was a bit more going on than that. We’ve tried to bring out as much of her personality as we can in the drama.

WUTHERING HEIGHTS VERSUSJANE EYRE: I didn’t know a huge amount about the Brontë family beyond their literature. I’d read Wuthering Heights as a teenager; I think I’d read Jane Eyre as well. I didn’t wildly prefer one to the other; I just found them so different. Jane Eyre is not really a safe story, because it’s still very dramatic, but it feels a little bit safer in that you feel that you’re in the hands of a narrator. I don’t really know how to put it, but I felt safer reading Jane Eyre somehow, whereas Wuthering Heights is just mental.

BRANWELL, THE BRONTË BROTHER: [The existence of Branwell] colors how you see the Brontë sisters as survivors. Not only were they these three amazing geniuses who wrote books, they were also dealing with this thing at home that was just a nightmare. There was no word for it in those days, or understanding of addiction, really, beyond the very basic one. The effects of growing up with their brother is in their books. They, all of them, touch on characters that have shades of Branwell I think. It’s quite incredible.

AN ALTERNATE REALITY: It’s hard to imagine what the Brontë sisters’ lives would’ve been like had they been men. Different things would’ve been expected of them, and maybe they wouldn’t have ended up writing because they would’ve been packed off to do something else. It’s interesting that Branwell was the only son and he was the one who had a complete meltdown, probably partly because of the pressure that was on him to be the one who’s going to go off and do great things. In a way, the women were possibly able to write as freely as they were partly because nothing was expected of them. Obviously they wouldn’t have had to publish under pseudonyms to conceal the fact that they were women—they wouldn’t have had to negotiate that. They would’ve been immediately more respected, but you deal with what you deal with. They probably would’ve written about quite different things.

TO WALK INVISIBLE AIRS TONIGHT IN THE U.K. ON BBC1.