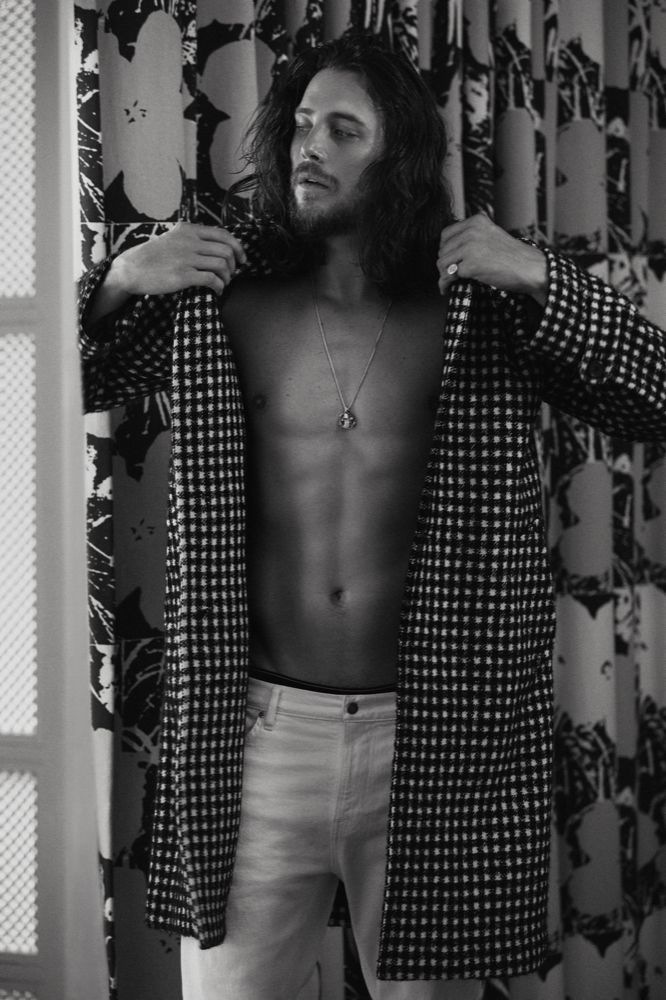 In the fourth episode of TNT’s new drama series Animal Kingdom, Craig Cody finds his girlfriend lying unconscious on her bathroom floor. He checks her pulse, like a gentleman. Then he absconds with her money, jewelry, and drugs. “I don’t think that at their core, anyone feels that they’re a bad person. I don’t think Craig necessarily sees his behavior as bad,” explains British actor Ben Robson, who plays Craig on the show. “It’s only bad when he’s actually got himself in trouble and then looks himself in the mirror a bit,” he continues. “But once he’s gotten over it, he’s pretty much back to where he was. He’s someone who constantly lives in the moment.”

Led by matriarch Smurf (Ellen Barkin), the Cody family deals drugs, robs banks, and generally engages in criminal activities. There is Pope (Shawn Hatosy), the eldest of Smurf’s sons, fresh out of jail and mentally ill at ease; Baz (Scott Speedman), Smurf’s adoptive son and de facto second-in-command; Deran (Jake Weary), the baby of the group and Smurf’s favorite; and J (Finn Cole), Smurf’s estranged grandson and the newest addition to the family business. Wedged in between Baz and Deran is Craig. “Craig definitely is a middle child,” says Robson. “It’s probably why he’s as wild as he is, to some degree.”

Next week, Animal Kingdom will conclude its first season (a second is already in the works). While the show’s premise is based on David Michôd‘s 2010 film of the same name, the characters are more malleable, and Robson was not given Craig’s arc in advance. “I knew he was a wild character. I knew he was going to get himself into a lot of trouble because he is so impulsive,” he says. “[But] you get the script a week before shooting while you’re shooting the previous episode. You kind of find out on a week-to-week basis,” he continues. “You have to be prepared for the unexpected because anything’s possible—not only with the Cody family, but with Craig to a further degree.”

FAMILY BACKGROUND: My father worked in manufacturing and was much more of a number cruncher. My younger brother works in wealth management. Most of my friends [work as] oil brokers and ship brokers and in the City. I have a younger sister who now works as an agent for directors and voice coaches. She was in casting for a while. A long time ago I actually had to go do an audition in front of my sister. It was quite a strange feeling. I did not get the part, but she assured me that it was a good audition all the same. She said it went well but I wasn’t right for the role—the old cliché.

I do feel quite like the black sheep between my family and friends to a certain extent. It makes it a lot more challenging because you don’t have that familiarity that you get when you grow up with a whole load of friends who are into the same things. I went to the movies with friends, but we never really discussed it.

STAGE DEBUT: I did a Nativity play when I was four. I think that was the last time I graced the stage. I can’t even remember [who I played]. I did have a strop in the middle of the play because someone had said my line or taken my mark or I didn’t want to do it. I stopped the middle of the performance. There’s a photo my mum has of me with my arm hiding my face having a big cry, not wanting to be on stage at the time. I think I knew right then and there that I needed to be an actor. [laughs]

SCHOOL DAYS: I wasn’t sure of who I wanted to be, what I wanted to be. I was always very creative; I wanted to get into photography but my school wouldn’t let me. I did design. I always enjoyed drawing. Some of the places I went were very rigid in terms of what they believed was a doss subject and what was a serious education. I wanted to do a lot more of the creative stuff and was stopped by teachers. They didn’t think they were the right things to be doing, but they were much more academic than I was.

THE TURNING POINT: I went to the University of the West of England, which is in Bristol. I was there studying business. A friend said he always wanted to get into acting, and I said I’d love to give it a shot. Within pretty much an hour, we’d booked two flights to go to New York. I didn’t tell any of my family or friends; didn’t let anything put me off in terms of how crazy it was to do in the first place. I got back, finished off my degree, and moved out to L.A. to study at Stella Adler in Hollywood. I had a lot of questions to answer to friends. I think my parents were pretty surprised to begin with because they didn’t know that I had decided to go on holiday. Then I told them I’d gone off to act and I think they were pretty stunned. My friends definitely were stunned. I got interrogated by them—”Do you really think you can do this? Where did this come from? Who do you think you are?”—which I can completely understand. I got into acting relatively late—I was 24, 25 when I really decided it was what I wanted to do.

FINDING CRAIG: I was coming off Vikings and I got sent the Animal Kingdom script. I fell in love with it immediately and really identified with Craig. I was just really drawn to who he was and the family dynamic—how they all fought for their mother’s love and attention. I sent in a tape and it went over to America. I got a phone call on a Sunday for a callback, went in on the Monday and the Tuesday, and got cleared from Vikings on Wednesday. Thursday, I was in the test read. I [found] out [about it] at nine o’clock in the morning and at ten o’clock I was at the Warner Brothers studio. I was pretty much shooting the next day. It was pretty wild.

BROTHERLY BONDING: Animal Kingdom was definitely a good vibe and everyone got on very quickly. When we would go on location to Oceanside and were all living there, it’s always a bonding experience. You definitely get to know each other a lot more on location. Even on set it’s a big bonding experience because you’re always up to mischief.