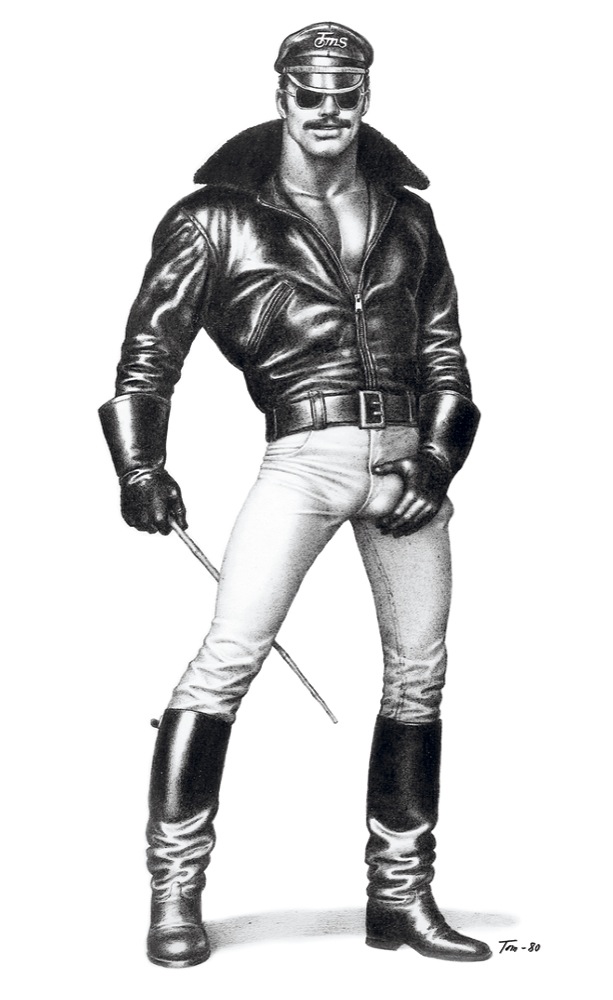 The pneumatic pecs. The bubble butts. The willowy waistlines and accomplished abs. The dicks that could double as fire hoses. Tom of Finland’s iconic drawings of idealized gay sexuality are, as a body of work, a buffet of fantastically rendered flesh. But what continues to make Tom’s men so incredibly subversive is a quality far less salacious than those by which they are best known: their smiles. Years before gay liberation was conceivable and a half-century before society would see quantifiable proof of its fruits, Tom of Finland (birth name: Touko Laaksonen) was depicting hardcore, all-male sex, often set in public spaces, and he was doing it with a positive sensibility. Tom’s men were out, they weren’t pathologized, and they were shameless in a time when it seemed impossible for most gay men to be that way.

“I think the liberated smile that his characters have is still progressive,” says Stefan Kalmár, the curator of “Tom of Finland: The Pleasure of Play,” a comprehensive exhibit of Laaksonen’s work that opens in June at New York’s Artists Space (where Kalmár is also executive director). “It’s not like party-and-play, hidden-hotel-rooms business. This is out in the open and therefore still a valuable discussion today about sexuality that’s not about gay marriage.”

Laaksonen’s work retains its radical function; it challenges the current belief held by many gays that in order to secure equal rights, we must downplay the sex in our sexuality and present ourselves as well behaved and “normal” (whatever that means). Tom of Finland spent his career contradicting the prevailing narratives of neutered and effeminate gay life. Of his subjects, Laaksonen said, “I began to exaggerate their maleness on purpose to point out that all gays don’t necessarily need to be just ‘those damn queers,’ that they could be as handsome, strong, and masculine as any other men.”

“The Pleasure of Play” will include more than 180 drawings, often executed in graphite, and 600 photo collages. The work spans Laaksonen’s childhood growing up in Kaarina, Finland, as the son of schoolteachers to his 1957 entry into the American market via bodybuilding magazines, all the way to the straightforwardly pornographic work that he did up until his death from emphysema in 1991. Kalmár says the exhibition is focused on “the more perverted stuff,” so expect drawings of orgies, leather play, jailhouse scenarios, depictions of sexual versatility, and even some men fucking in Nazi uniforms, which was inspired by the German soldiers who occupied Finland in World War II. “It’s hardcore, in a way,” says Kalmár. “Even now we think, ‘Can we even show this?’ ”

Kalmár peppers his discussion of Laaksonen’s work with unearthed facts about the artist’s life, such as his remaining closeted to his family until death and that he wasn’t particularly sexually active. “I think he was more of a looker,” says Kalmár. In that light, Tom of Finland’s body of work represents an uncommonly literal expression of sexuality. It is a tangible document of time spent worshipping the male form, time that, for so many of us, is just ejaculated away.

Laaksonen’s work was once regarded as utilitarian jerk-off material for men who didn’t have access to gay pornography. But then the porn industry exploded and body-modification technology became so advanced that Tom of Finland’s “fantasy drawings” became more or less a reality. Time may have diminished the intended usefulness of Laaksonen’s work, but it has only affirmed its status as art. In 2015, Tom of Finland is simultaneously nostalgic, prescient, and aspirational. Laaksonen, who received his artistic nom de plume from the editor of Physique Pictorial in 1957, spent his career drawing utopian images of gay sexuality, waiting for the world to catch up, and watching it happen in increments. Those smiles on his men are as blissful as they are knowing.