When you hear the name Chloe Wise, you may think about bagels. Back in 2014, the actor Bobbi Menuez attended a Chanel event wearing a “bagel bag,” which was actually one of Wise’s sculptures—aptly titled “Bagel No. 5.” The Canadian artist has since taken the art world by storm, becoming a source for everything weird and wonderful. Most recently, Wise opened a new exhibition at Almine Rech New York, “Thank You For The Nice Fire.” The works deal with politics in a post-Trump era and the state of art in the “new normal.” In honor of the timely exhibit, Wise sat down with her friend, and occasional muse, Richie Shazam—there’s a painting of Richie in the show—to discuss pressing pause, missing parties, and being beautifully indifferent to it all.

CHLOE WISE: We’re doing a podcast version of an interview, but we’re sitting at a table, actually hanging out.

WISE: You just tried to order a café frappe.

WISE: I’m going to start by interviewing you. Richie, did you like my show?

SHAZAM: I’m obsessed with your show. I saw it unfold from your studio to the incredible space it’s in now. It’s probably your best work yet. You work so tirelessly, and I’ve seen all of your hard work, specifically on these paintings and sculptures, and the installation altogether. It’s such a capsule of the time we’re living in right now.

WISE: Which is such a weird time, because it’s at once so endless and long, and also it’s quite short, and there aren’t really moments by which to define the passing of time. I’ve been inside my house and work studio for I can’t even tell you how many months on end. The passing of time is sort of impossible to even quantify without having to check the date.

SHAZAM: Absolutely. I think what really resonated with me is your stamp on the constructs of time, and space, and understanding what our world looks like right now, and how it’s become so introspective, interior, looking within ourselves. So many truths came to the surface while looking at your pieces.

WISE: I appreciate that. The idea of having been paused is only a pause insofar as how we define what  was once play, or what was once defined as going forward. In a sense, we’re pausing a lot of our aspirations, pausing our travel schedules, pausing the way that we viewed our interaction with the passing of time, or navigating that space. 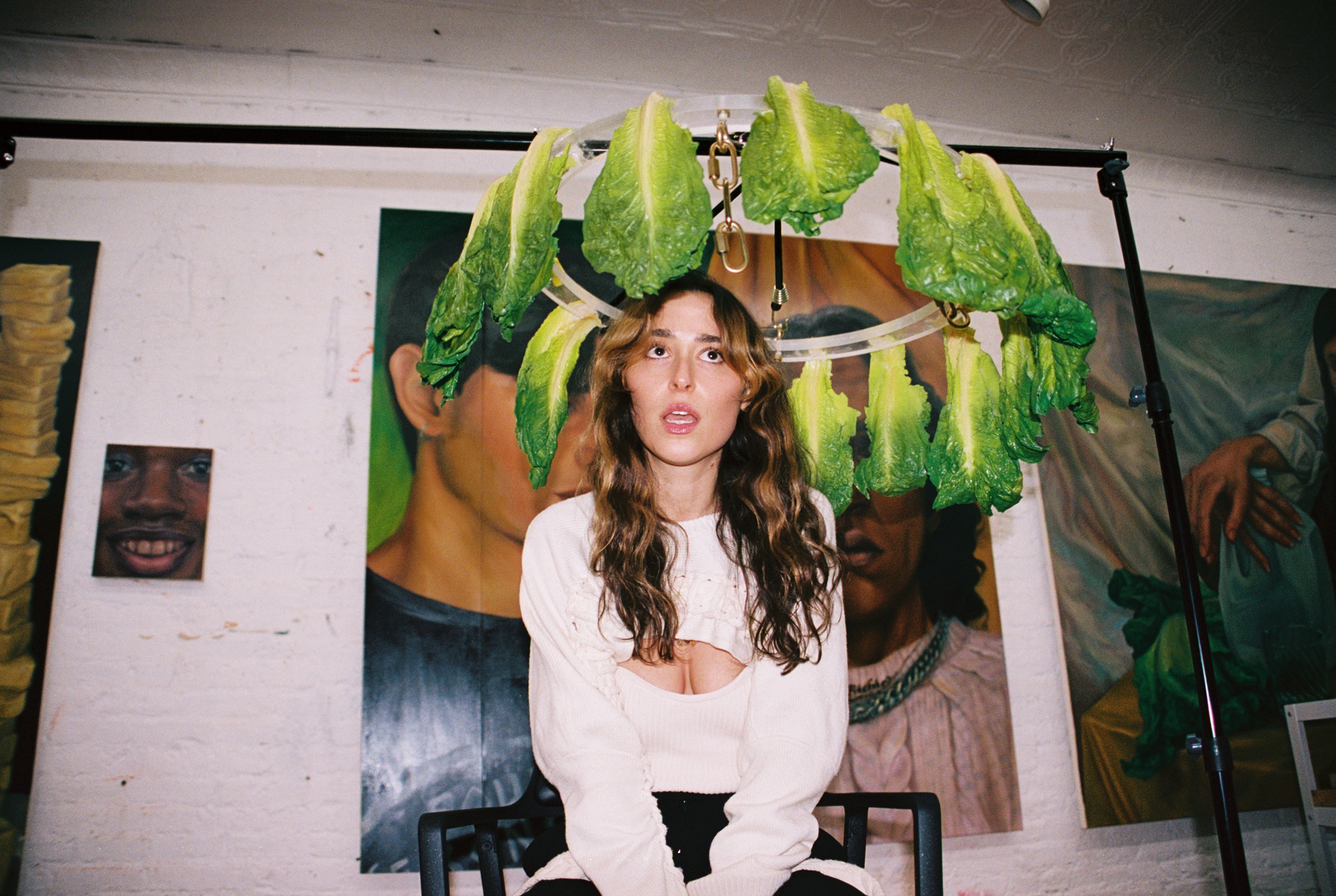 SHAZAM: We’re seeing your lens, seeing Chloe’s gaze, realizing that Chloe’s gaze is everyone’s gaze: all of us are kind of looking at each other from inside our homes. Being in New York, we’re so used to this hustle and bustle, and moving a million miles a minute, and we’re not doing that as of late, in the past year. Our new normal has not been that. It’s been us slouched in our homes, with ourselves in solitude.

WISE: In disbelief of how active we used to be.

SHAZAM: I miss partying, I miss connecting, I miss seeing the ones I love.

WISE: I miss being late to something, being so stressed out, and then getting there and having that immediate relief of being like, “I’m not that late.” I think  part of the reason I made my show about indifference is because indifference is the tool that you use to overcome unease. Unease left untreated would be anxiety, or unhappiness, or pain, or suffering. There’s a beautiful [Jean] Baudrillard quote which is, “Difference is beautiful, but indifference is sublime.” It’s like, I rise above all the stuff to just not care. I am unfeeling, not because I don’t care but because I care so much that if I lean into it I will be hurting.

So, indifference became this theme that I feel was my only option. I can’t make work right now, what am I supposed to make work about? It’s not my turn to speak. I want to give voice to others at this moment, I want to listen because I’m learning a lot, and also witnessing history unfold. I’m making work because it’s being asked of me, but in the work itself, it’s like, I’m not going to be like, “Everything’s great and it’s beautiful, and it’s a sunset and we’re happy.” But I’m also not going to be like, “Ah, the pain and suffering. Here’s death and loss.” That would be insane, because that would make it trite.

And so, in a way, the only option I had even in making the show was to choose the show itself. Having an exhibition itself, just like having a fashion show itself, or having anything that happens in this moment that’s not charitable, or protest, or political mobilization—anything that happens right now can be important, but is, in itself, indifferent to the ongoing crises. Doing anything, baking, or carrying on and reading fiction, making an art exhibition, in my case, is an act of utter indifference. Even if you really want to be helpful, all you can do is acknowledge the scenario. And so I thought, in making a show about the very indifference of carrying on, it addresses the difficulty of coming to terms with our helplessness in this moment.

SHAZAM: I feel like you effortlessly depicted all of the people in your life and your world. For me, seeing myself in the show was such a meta moment. As beings, our identities aren’t static. We’re constantly evolving and growing and changing.

WISE: When you look at a painting of yourself, can you recollect when it was from, or is it sort of melted?

SHAZAM: You know what? My brain is fighting to remember those moments because I had so many of those moments where it’s us hanging out, us doing activities, us just immersed so heavily in each other’s lives. So, it becomes heavy nostalgia. We’ve done so many things all around the world. We’ve had such beautiful, poignant moments. But, to be honest, I still equate that with the moments of the last year that we’ve had because though they were few, they were important and beautiful.

WISE: That’s so sweet. It’s really funny because being alone, but being surrounded by all the paintings of my friends felt less lonely. There’s almost the painterliness of memories. That’s so dramatic and cheesy to say, but I guess memories are painterly.

SHAZAM: No, absolutely. There are these snapshots of time and place that I just can’t fully remember, and when I see them, it brings warmth.

SHAZAM: It’s the moment before the party.

WISE: It’s interstitial moments and the way those moments are the mundane, and honoring them as though they’re grandiose.

SHAZAM: Tell me about the sounds.

WISE: I made a sculpture of a video, in the sense that it’s an installation of a house’s exterior, and I was thinking about glass block because there’s glass block at my parents’ house, where I grew up. My sister, right away, recognized it when I sent her a video of the installation. She was like, “This kind of triggers my memory of Halloween, being outside of our house, our dad driving us home at 6:00 PM.” There’s this flashing light of the TV because the TV was always on in my parents’ house. They always had two TVs on, playing the same channel, but they were a second off and it drove me crazy. And they’d keep the news on and I was like, “Why do you want to hear the news all the time?” But now I’m that way. I have the news on all the time.

WISE: Isn’t that a funny, mediated way of learning? WISE: In a way, it’s this voyeurism that we feel when we watch the news, or when we look on Instagram. I created this sensation of that feeling, of looking inside someone’s house, maybe seeing their chandelier inside out of the corner of your eye. Seeing for a moment what it’s like inside their house as you’ve been stuck in your house, and then realizing that you’re outside of it. The more you get close to someone’s window, you see, “Oh, they’re having dinner.”

WISE: You see someone having sex from their window. In a way, it’s really human.

WISE: Then you realize that you’re not invited inside, or there’s a separation, there’s glass. And that’s why I love glass block. It’s sort of rippled, so you can see, but there’s an obscuring. You understand the recognizable motions and the light flickering. It’s kind of comforting, but it’s also a reminder of the otherness. And so, you see into someone’s life on Instagram, or you watch reality TV. There’s this inside-outside exclusion, a separation between people, and we’re all connected through the indifferent recognizable sounds of advertising. So I was like, let’s create a soundtrack or a score that embodies or kind of has that recognizable feeling of chatter, of TV channel-switching. It replicates the sound of channels changing.

SHAZAM: It’s like the chaos of noise, especially being in the city—drowning it all out. But now, we’re listening to these little things that we never really paid much attention to. It’s sort of this numbness.

WISE: Remember the silence of the city when things were closed down? Especially during the protests?

WISE: You could hear a pin drop in the city. The other day I was walking and it was so quiet, and I heard so many birds chirping that I thought somebody was playing an audio track, and so I crossed the street, and I was looking in the tree and there were a ton of little birdies. I was like, “Is this normal? Do they do this?” WISE: But we used to hear such noise, the bullshit, and the invitations, and the stresses, and the deadlines, and whatever we were hearing. We were obsessed with the little, mundane, unimportant things. But we were used to a certain type of audio indifference, where we would be able to numb it out, and now there’s a stillness. I mean, we still engage in the numbing. I can have the news on where they’re talking about the number of deaths, and I’m Googling a recipe for sourdough focaccia or something.

SHAZAM: It’s the moment in which we’re existing right now. And that we’ve grown so accustomed to.

WISE: I don’t know how we’re going to go back, but we will. It’s going to be a trickle. It’s not going to be one day that kind of turns off and we’re normal.

SHAZAM: Art and fashion are just working in these bubble realms where we still have to sort of serve ourselves and serve others in the same way.

WISE: The show must go on.

SHAZAM: I’m so interested to see how our worlds are going to evolve and change, and continue to do so in the next few weeks and months.

WISE: I mean, we all thought that we would be so much more down to earth and humble and relaxed, and that we would always be forever changed, but our indifference kicks in, and we adapt, and we’re not going to be that different.

SHAZAM: We’ll look back at this time and be like, “Whoa, the world was fully on pause, but we were still creating.” Well, in 100 years they’re going to want to see a COVID testing site as an installation.

WISE: Right? They already made a museum in Wuhan. They made a COVID museum with mannequins of Hazmat suit-clad workers.

SHAZAM: I got the first dose of the vaccination.

WISE: Can you read minds, though?