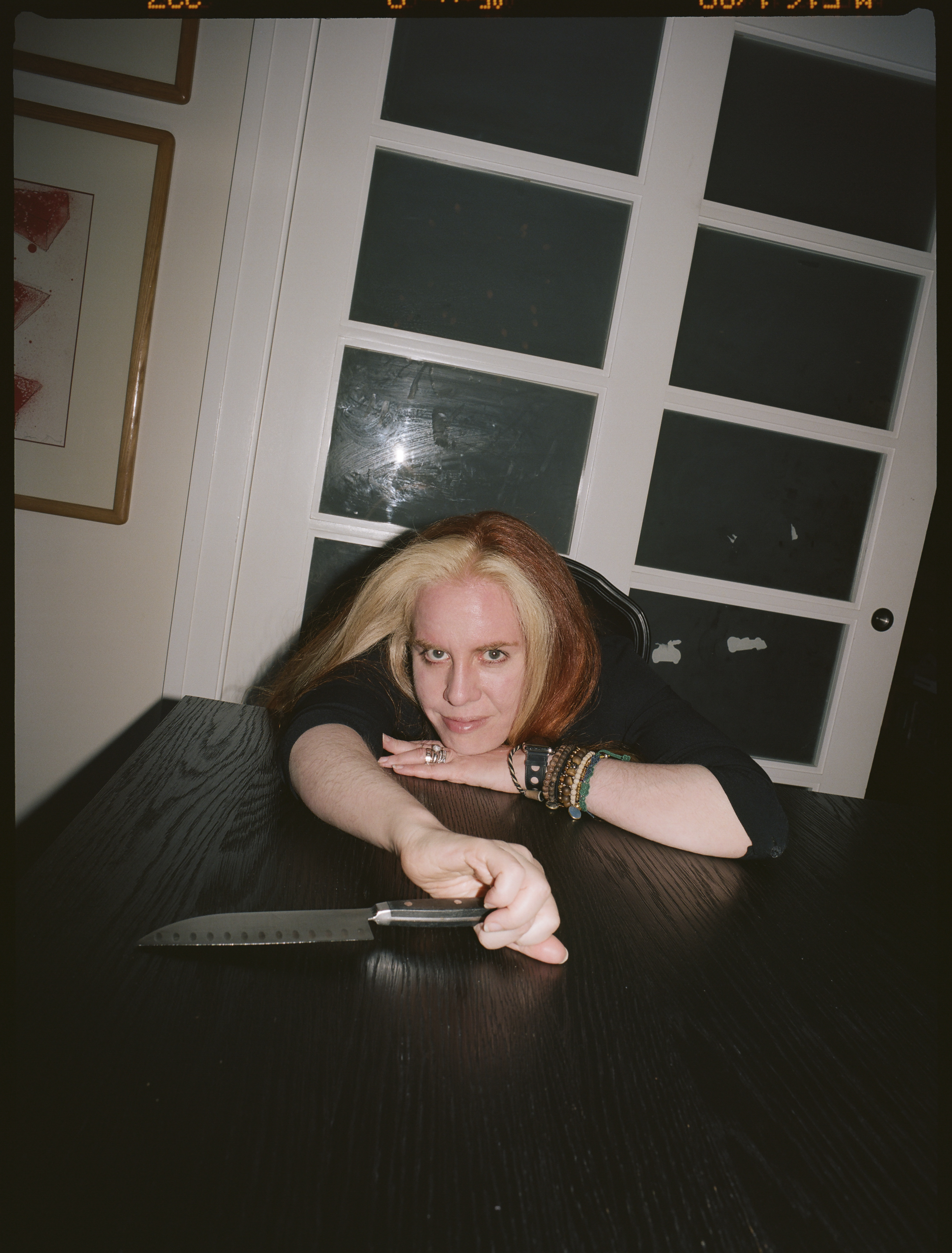 In her uptown apartment, novelist Molly Jong-Fast grips a meat cleaver. “This is totally going to come back and haunt me later, isn’t it?” she says, as a camera light flashes. The fear is not unfounded. Since Donald Trump’s election, Jong-Fast has transformed into a major force shaping Democratic politics. Online, she is known for her Twitter persona and eviscerations of the far-right. (Hillary Clinton told her she was a fan when the two met at a fundraiser in Philadelphia last fall). But in the political arena, she wields a reputation as a kingmaker.  Just weeks before 2020 hopeful Pete Buttigieg burst onto television screens in every American household following a glossy Washington Post Magazine profile, Jong-Fast held a meet-and-greet for the South Bend mayor, where he discussed his strategy for beating Trump. Other dinner parties she’s hosted have seen surprise appearances from author Joyce Carol Oates, CNN contributor Joan Walsh, Republican political consultant Rick Wilson, Teen Vogue columnist Lauren Duca, Trump Tower Moscow negotiator Felix Sater, and former CIA officer David Priess.

Before pivoting to politics, Jong-Fast was a celebrated author like her mother Erica Jong, the second-wave feminist behind the 1973 New York Times bestseller Fear of Flying). Molly wrote The Social Climber’s Handbook and Normal Girl, the latter of which was adapted into a screenplay by Bret Easton Ellis—the target of ire in her recent column for The Daily Beast. A photo with a meat cleaver could derail what looks to be the beginning of a promising career in politics. “I can’t wait for this to end up on Breitbart,” she says.  Interview sat down with Jong-Fast to discuss her journey from climbing the ladder of activism, the 2020 election, and whether socialites are more dangerous than political operatives.

DAVIS RICHARDSON: Why did you decide to get involved in politics?

MOLLY JONG-FAST: I went to this Election Day party at my friend’s house, and I was looking down at the little New York Times barometer on my phone. It was like, there’s a 99% chance Hillary Clinton is the next President of the United States. Then all of a sudden it was like, 54%, 51%, 48%, 37%. People kept saying, “You know, she can still win Florida.” I kept thinking to myself, “She’s not going to win Florida. She could barely win Virginia. I thought, “Oh my God, this is not good.”

That was when I realized Donald Trump was going to win. It was, like, the worst night of my life. I woke up at 3am, my husband was sitting there, staring at the television. I was like, “It happened, right?” He was like, “She lost.” Then every day, for an entire week, I cried. Not because I was so politically active, because I really wasn’t, but I was so shocked that American white women had voted for this guy who was so clearly against all of their interests. I was just completely shocked. I wept every day, and I remember that after—

JONG-FAST: I actually cried, and I’m not a crier. I don’t give a fuck about anything. I cried every day. It was mostly because I was angry, because I thought it was so fucking pathetic. I remember looking at my teenage son, and he was like, “Oh my God, this is the end of the world.” I was like, “For you, it’s not as bad as it is for your sister.” One of my best friends from high school’s mother had been groped by Trump. I knew all these people who had been groped by him, because I grew up in the same place as him and his kids. I knew all these people who had been groped by him. I said to my teenage son, “These women [who voted for Trump] said that what happens to women doesn’t matter.” That was when I got involved in politics. I was like, “Holy shit.”

RICHARDSON: What was the transition process like moving from culture to politics?

JONG-FAST: I’ve gotten a little more nuanced about some of my understandings of things. In some ways, it was not a bad time to learn, because everything was so incredibly fucked up. There was so much weird content being produced. It’s not like during the Obama administration, like when he wore the tan suit. There were some scandals during the Obama administration, but they were not the level of gonzo insane of what’s going on now. There was a time when I wrote like Bret Easton Ellis and cared about what Bret Easton Ellis cared about. I wasn’t a person who cared about the good guys winning. I just cared about blowing the whole thing up.

JONG-FAST: I came to my senses, in a way. It’s funny, because I was thinking about Bret the other day, and it’s not so much that he changed, it’s more that I changed. I used to like people like that, because I felt like what was more important was style over substance. As I’ve seen America teeter on the precipice of disaster, I now think that it is not that way.

RICHARDSON: You said election night was a big wake up call. When do you think that change occurred in you, in terms of favoring substance over style? Was that a little bit more gradual?

JONG-FAST: I was worried about what would happen, and it was so much worse than I even thought it would be. I had a lot of friends who had known the Trumps. They said, “You know, he’s from New York. He’s not a racist. He used to be a Democrat. He’s pro-choice. Don’t worry, he’ll go back to that. He just did this to win the election.” I thought, “Maybe.” It turns out, he’s not. He’s become all of the Mike Pencey things that he never was before.

I remember the point that we knew no good would come from this administration, when he picked Scott Pruitt to run the EPA—the guy who had sued the EPA into the ground. That was the moment I knew that we were just literally, there was nothing good would come from this. Anytime I would try to tell myself that it wasn’t going to be so bad, I was wrong. RICHARDSON: How much learning about politics have you done through interacting with other people?

JONG-FAST: A lot, a lot, a lot. Talking to people, and listening to them, but really also seeing what they do. The thing that I think is unusual about me, which is not to say that I’m so great, but I don’t necessarily need to be around people who have the same views as I do. I’m friends with a libertarian, Nick Gillespie. I’m horrified by some of the stuff he writes, but I am a good friend of his.

RICHARDSON: How did you apply some of The Social Climber’s Handbook philosophy to your experiences in the political arena?

JONG-FAST: I think it’s okay to have dissenting viewpoints. Someone posted a really ugly picture of me on Twitter recently. When people say, “I don’t care what other people think of me,” I always think it’s kind of bullshit. You don’t not ever care. I want to be liked, and it’s a bummer when I’m not liked, but I also don’t have to be liked. I don’t think my value comes from how much people like me.

RICHARDSON: Has Twitter helped toughen you up a bit?

JONG-FAST: I’ve had a lot of mean things written about me in many different venues. I think Twitter has definitely toughened me up a certain extent. The problem with Twitter is there’s this false sense of control, that you can control what people are saying about you by blocking people or whatever. You really can’t. Whatever anyone’s going to say about you, they’re going to say. It’s definitely a weird venue.

RICHARDSON: Who do you find to be more vicious: Upper East Side socialites or political operatives?

RICHARDSON: They hoard it.

JONG-FAST: Right. Whereas I feel like these Upper East Side ladies, they just don’t have that much to do. Like all these fake businesses, the fake jewelry lines, the handbags, the tennis clothing. All these careers that aren’t really careers, where you lose money. Those women are pretty rough, though. When you’re a political operative, you’re destroying other people’s lives with oppo.

RICHARDSON: When did you start hosting these politically charged dinner parties?

JONG-FAST: I started having them two years ago. It’s just fun to randomly ask people to come to dinner. A lot of times they don’t come, but sometimes they do. I love getting to meet people that I sort of know from Twitter, or that I don’t really know. The idea is not to traumatize people. There are certain people who I think it would be too stressful for, so I won’t invite them. There are people on the left and the right who are very good sports, and it doesn’t necessarily have much to do with where they fall on that spectrum. It has more to do with their personality. If you’re going to write about people at the dinners, I’m not going to have you there anymore.

RICHARDSON: Has that ever happened?

JONG-FAST: Oh yeah. If you’re going to be really menacing to the other guests, that’s not okay. It’s meant to be a safe space, so to speak, for people to have conversations. The thing that’s so insane is the way that government works is compromise. In Twitter, you get a bad rap for talking about wanting to compromise. The only way we’re going to pass certain laws and do certain governments is by some amount of compromise. You have to at least be able to speak to these people. My larger hope is that people can sort of connect that way.

RICHARDSON: Which 2020 candidate are you supporting?

JONG-FAST: I like him because I think he’s smart. I think he’s a huge, huge win for the LGBT community. In some ways, I don’t think it’s bad to have someone who’s absolutely the opposite of Trump. He’s the opposite of Trump in every way. He’s young, he’s very earnest. I’m a big fan of earnestness. I’ll support whoever the Democratic nominee is, and I hope that other people will too. We still have 19 fucking months before this election. That’s more than a year. I will support the nominee, and I hope that everyone else will too. What matters the most is getting rid of Trumpism—that’s really important.