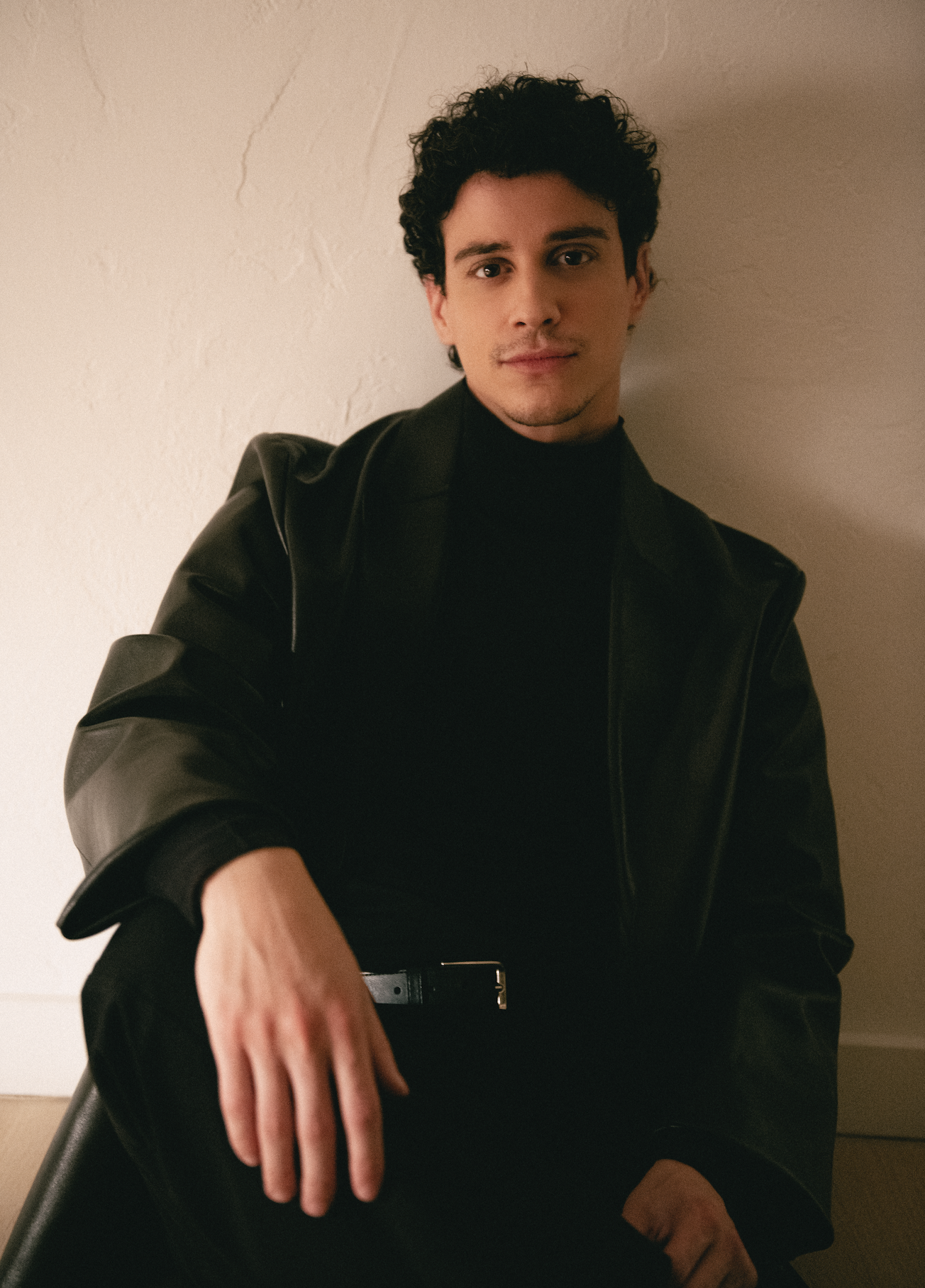 Adam DiMarco has seen the tweets. He’s seen the Reddit posts, the Twitter threads, and even the TikTok conspiracy theories. But DiMarco, who plays the equal parts sweet and naïve Albie Di Grasso in the latest season of The White Lotus, is not dissimilar from his character in real life: he’s sensitive, and tries not to let all the hoopla get to his head. DiMarco’s character has had his fair share of viral storylines since the premiere of the second season of HBO’s hit series six weeks ago, namely his tumultuous relationship with Portia (Haley Lu Richardson), his blossoming love affair with Lucia (Simona Tabasco), and the dichotomy between his wide-eyed, soft perspective on love and romance and his sex-crazed kinsfolk, including his father Dominic (Michael Imperioli) and his casually misogynistic, old-fashioned grandfather Bert (F. Murray Abraham). Days before the season finale of the show’s electric second season, DiMarco sat down with Interview to discuss seeing himself naked and vulnerable on television, the endless series of pranks the cast played during production, and, of course, the horny tweets.

JACKSON WALD: So, I have a bunch of questions for you.

WALD: How did you become aware of the role of Albie? What was the audition like?

DIMARCO: It was like any other audition. You get the character breakdown and then the sides, which are scenes they pulled from the scripts. And then I got the first episode. I put a little bit more work into this than some other auditions. I felt like the character was someone I could bring some authenticity to and be good for. And then the callback was just a Zoom callback. It was surprisingly painless, but I had gotten a haircut before the callback and I was panicking. I was like, “Oh, no, my hair’s too short. They’re not going to cast me.” And my manager’s like, “Just relax. It doesn’t matter.”

WALD: There is a fixation on social media about The White Lotus. What has it been like for you being on this show with such a devoted fan base and seeing people actively engaging with it every week?

DIMARCO: It’s been really cool and really novel because I’ve never been in a show that people have been this excited about before. Most actors haven’t. People treat this show like it’s a book club every week. A lot of friends have told me they watch it and then have a full-on debrief and unpack the episodes and discuss the scenes and themes. I’ll dip my toe into the waters of Twitter and Reddit. But you don’t want to go too far into the deep end with that stuff because there are often polarizing views for every characters. Actors are sensitive to that kind of stuff, so it’s good just to pique your curiosity until you see something you don’t like.

WALD: Have you seen the thirsty tweets for your character?

DIMARCO: I’ve seen some thirsty tweets. People have sent them to me. I’m aware.

WALD: In the scenes of yours that are more scandalous, what was your reaction seeing that live?

DIMARCO: You just have to disassociate. It would be great if HBO could make a cut of the episodes that were family-friendly for the actors, that didn’t include their sex or nudity scenes. But that doesn’t exist. I’ve come to accept that that’s out there and of course, I chose to do all of that. I could’ve said no to any of those scenes. But there’s an intimacy coordinator and all the actors do what they’re comfortable doing. I think the scenes turned out great. I watched episode five last night. It was my first time watching an episode with a large group of people. I was with Sabrina [Impacciatore] and John [Gries], and a lot of mutual friends, and they wanted to watch the episode. Just before they put it on, I had a mini panic attack. I was like, “I don’t know if I can watch this episode in a room full of people. Especially since it starts with a sex scene. This is going to be a weird experience.” But Sabrina really calmed me down and encouraged me just to try it. I was definitely cringing and hiding behind my hands when that stuff was going on, but it was cool to hear the reactions to the episode as a whole.

WALD: It was like your scene was just the soft launch for that last scene with Leo Woodall and Tom Hollander.

DIMARCO: Oh yeah. It was a misdirect. You thought it was going to end just like the previous one, but there’s a little more.

WALD: Aubrey Plaza did an interview for GQ, and she told a story about a prank that she pulled on you that seemed fairly elaborate and intricate. I was wondering if you could tell me what happened from your perspective.

DIMARCO: Well, Aubrey had basically done a witchcraft-inspired prank on me in my dressing room. And then I had asked the hotel, “Hey, who did this?” I had a feeling it was a castmate, but I had to be sure that it wasn’t a real witch. And then they were like, “Oh yeah, it was Mrs. Plaza.” And I have proof—a handwritten note. And then I talked to her about it and she was feigning ignorance, but she’s such a good actor that I started to question it. So, I pranked her back, and then there was another set of symbols in my room.  You know how people burn paper and dip it in tea to make it look old?

DIMARCO: It was like that, under my door. That one wasn’t Aubrey—it was some of the other castmates. So it was this whole web of lies and conspiracy that went deep.

WALD: What was your first reaction when you saw the witchcraft symbols in your room?

DIMARCO: I got scared. Not actually scared, but I guess confused. And then, I don’t know the name of the feeling, but it was like I became Sherlock Holmes. I was like, “I need to get to the bottom of this.”

WALD: What was it like being in Italy for such an extended period of time?

DIMARCO: Yeah. At first it was an adjustment, like anything. And then you get really used to it and it becomes your norm, which is weird, to have living in a five-star hotel for a month become your norm. It was all weird. Getting there was weird. The adjustment was weird. But there was a really nice thing about Sicily where it feels like another world at times. Sometimes life can go by so quickly, but when we were out there, it felt like time really slowed down. I really liked that aspect of it. I was able to read a book for the first time in a while.

WALD: It was almost like when you weren’t even acting, you were living Albie’s vacation experience.

DIMARCO: Oh, yeah. But on an extreme scale.

WALD: During filming, was there one scene or one moment that felt the most rewarding once it was over?

DIMARCO: Yeah, there was a scene in the finale that when I first read it, I was excited to do it, but also kind of scared. And as an actor, the stuff you’re scared of is always the most rewarding. Or once you finish it, you’re like, “Wow, I got through that, and I didn’t die. I’m still here.”

WALD:  Do you believe Albie to be as gentle and sweet as he seems or comes off? Or, when acting as him and really exploring him, do you think there’s a more internalized masculinity present—something like his father and grandfather that he just keeps inside and doesn’t let out?

DIMARCO: What is great about all the characters is the ambiguity. There’s so much ambiguity in every character, in every situation. And then the audience can just decide how they feel. I was talking about Albie last night when we watched episode five with everyone. One person said to me that they loved that Albie was trying so hard not to be his father, and then just ended up doing the exact same thing he had done. That he’s going around calling everyone else out on their stuff, but still fumbling around in his, which is a very modern way of looking at the character. When you play a character, you must see them from a certain perspective. So, my approach to him was just to lean into the sweeter side of him.

WALD: What was it like working with F. Murray Abraham and Michael Imperioli?  Was there any wisdom or advice that you gleaned from them?

DIMARCO: I still talk to Michael and Murray. I actually was just texting both of them today. Whenever I go to New York, I will try to see them both. There’s so much that I learned from both of them. Honestly, every actor on this show is so good that I’ve learned something different from all of them. Michael and Murray both have such an ease to their work and they’re very prepared. But then when they’re doing it, they’re just so relaxed and not afraid to try something, even if it doesn’t work. It was cool seeing how everyone dialed into their craft and their specific method—that was what I took away from them.