Skittles Freezes, Taco Bell, and a Backwoods Blunt: An Afternoon with Trippie Redd 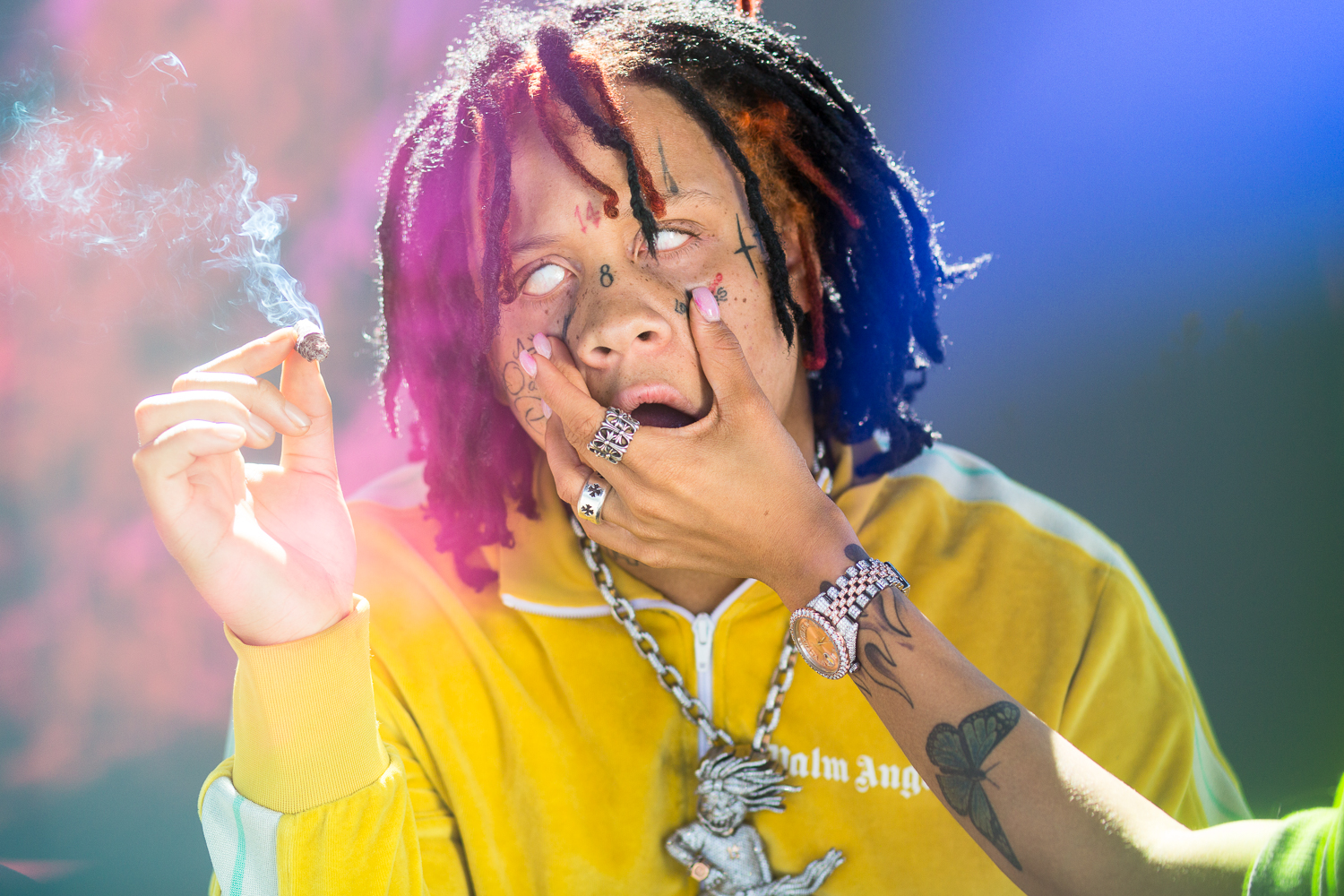 In 2008, a year of economic collapse, “no album out” Nicki Minaj, and Pineapple Express, Larry David produced an unaired comedy HBO pilot featuring Kanye West riding with his friends in his van and getting into hijinks. In 2011, the rap collective Odd Future released a ten-minute video featuring an SUV drive through Ladera, California, that has been viewed 8 million times. These two pop cultural artifacts stand out to me when I consider the mythos of the rap star car ride. When I got a text asking to conduct my interview with the rapper Trippie Redd in his car between press appearances for the release of his new album, !, the answer was obvious.

Upon meeting Trippie in Noho outside his Mercedes-Benz Sprinter, the first thing I notice about him is his hair, which is mostly black, save for a shock of maroon that dangles over his forehead. He talks in a meandering mumble punctuated by moments of intense excitement. His thoughts—including those on God (“I believe in the Devil. I believe there’s a God, too. I met God at church—the Catholic Church.”), A$AP Rocky’s Swedish prison fiasco (“That shit was some bullshit.”), and love (“It’s a lot of shit. Relationships are whatever.”)—ran the gamut. As I follow his entourage, a member of his crew leans over to me and says, “Are you ready to hotbox the car?” Let the record show that Trippie Redd prefers Indica over Sativa. Born Michael Lamar White IV in 1999, the Ohio native recorded his earliest songs at 15, while still in high school. At age 20, ! is his second album, and the title is a nod to ?, the last release from his close friend and collaborator, XXXTentacion, who was murdered in 2018. Known for his alt-rock influences and melodic hooks, the “Topanga” rapper has carved out a niche in the Soundcloud rap game. Part of a vanguard generation raised on social media, Trippie writes songs that feel born out of internet chaos. He is among a wave of dada rappers that have done away with narrative and speak to the post-truth world we live in, whether consciously or not.

This is to say nothing of Trippie’s personal style. Holding up bedazzled chains he designed himself, which feature a shape evocative of both an ice cream cone and cock-and-balls, he is dressed in a Palm Angels tee and Barneys x Crocs black rubber performance clogs, studded with metallic spikes and a red insignia. The shoes make him look a little like an alien. I figure it’s only right, then, to ask him about his own place in the cosmos as we drive through Midtown Manhattan.

CARINA IMBORNONE: Would you like to live in outer space?

IMBORNONE: Do you believe in aliens? What do they look like?

REDD: Anything. We aliens in a sense. If we went to another planet, like other than the ones we have already like Jupiter and Mars, if we went outside of those realms and went to all the other shit in the Milky Way and the galaxy, there’s places that have certain carbons and all types of shit that end up being something. Even if it’s bacteria, it’s an alien at the end of the day. So we definitely got aliens.

IMBORNONE: Do you want to meet them?

REDD: Hell yeah. They would probably kill us though. It is, after all, through the strange galaxy of the internet that Trippie Redd rose to fame. He currently has 7.3 million Instagram followers and more Spotify streams than Frank Ocean. “I like my phone. My phone makes magic happen,” he says, when I ask him if he’d rather live in a world without cell service. When I look over, I notice he has a particularly weak lock screen passcode.

Given that he hadn’t eaten all day (“I want my red Skittle Freeze”) during an extensive slate of interviews before flying back to L.A., we naturally get Taco Bell. “My favorite thing from Taco Bell is the Doritos Locos Tacos Supreme,” he says. “Well, about 3 or 4 of them.” One of his friends notices a guy walking down the street. “He has on two different fake Jordans,” he says from the backseat. “And he’s going to Taco Bell to get the same meal. That’s crazy. The American Dream.”

This is Trippie Redd’s interview, but as the car ride continues, it starts to feel more like a group effort. “Ask him, what’s the American Dream?” his buddy in the backseat restates after Trippie demurs. “I honestly just live in Trippie Redd’s world. I don’t live in America…I ain’t finna live anywhere else but America.” Trippie, who says he’s not a Republican or a Democrat—“I’m Trippie Redd”—does not vote, nor does he seem that bothered by the current state of American politics; there is a world weariness in his eyes that seems to reject his ability to have a worthwhile role in effecting political change. Or maybe he is just very stoned. By the time we reach Sixth Avenue, Trippie Redd has finished his Freeze. The hyper glow of its red-orange dye has been drained to the last dregs. Next to a Louis Vuitton, we leave a whole pizza, untouched and still in its box, on the car floor. I walk most of the way back to the Interview office on Canal Street. When I pass a fireman evacuating an animal shelter, cats spilling onto the street, it barely registers. After all, it’s not the strangest thing that has happened that day. And it’s not even 3 o’clock.