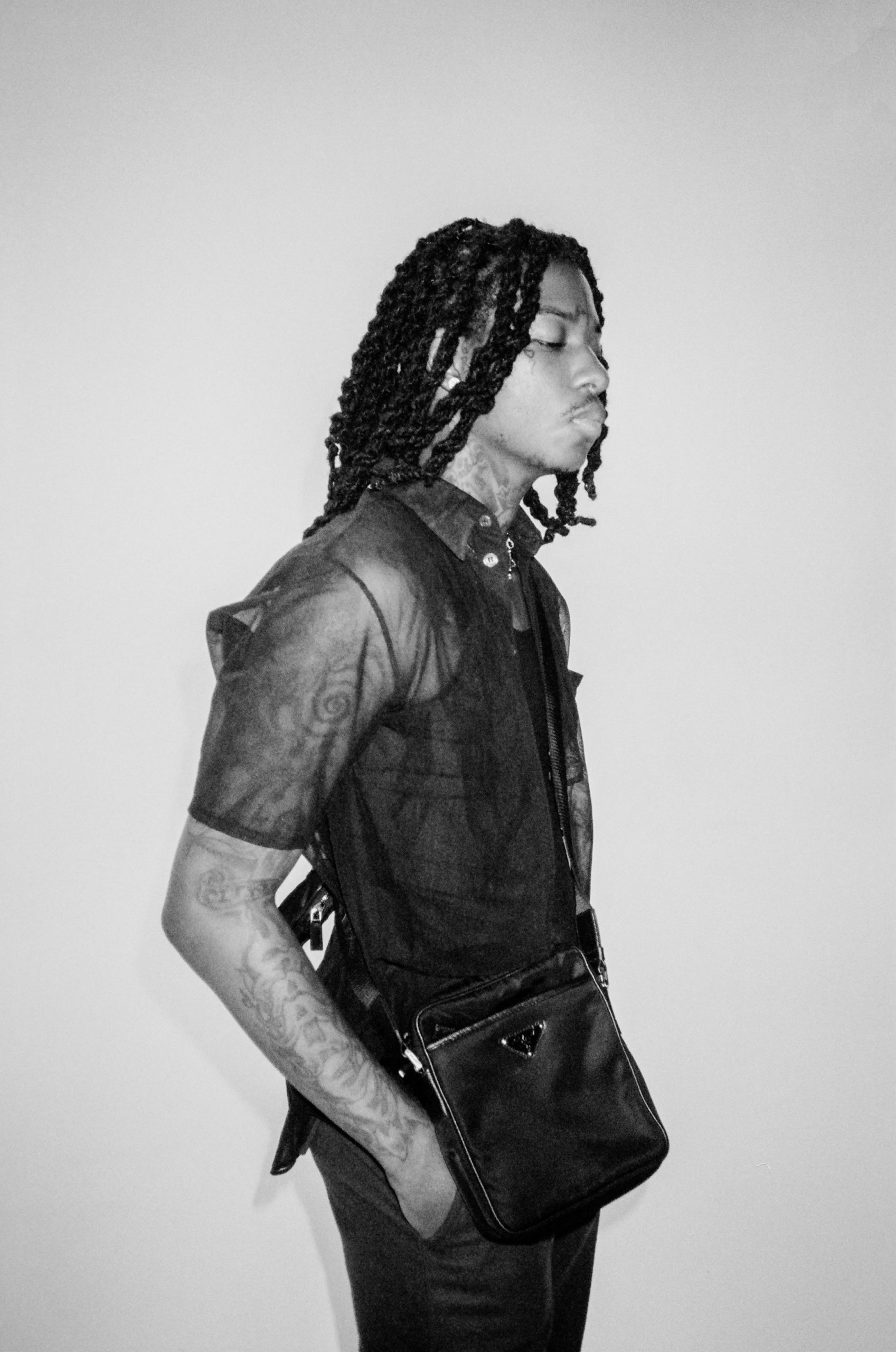 SahBabii isn’t your average rapper—in fact, he’s often billed as the “weirdest” rapper in Atlanta. His songs, eccentric and often comical, take fantastical subjects as diverse as squids, gorillas, and anime—often in combination—as their inspiration. But the 24-year-old artist’s newest album, Do It For Demon, reveals a new side of the eccentric artist to his listeners. While SahBabii’s signature wry wordplay and eargum adlibs remain a pillar of the new record, the emotional tenor is different. Do It For Demon centers on the passing of DemonChild, the rapper’s closest friend, who died as a result of gun violence last December. On the album, SahBabii’s joy and humor morphs into something somber, grief-stricken, and at times angry. “Every time I got on the mic,” the artist told Interview on a recent Zoom call, “I was thinking about him.” In spite of its traumatic origins, the record shows SahBabii leaving the protection of his signature absurdist subject matter in favor of something more vulnerable. Below, the rapper sat down with Interview to discuss Do it For Demon, childhood friendships, and projects to come.

WALD: For those who are less familiar with your past work, this album is a major departure. How has your sound and message changed since your start in 2017?

SAHBABII:  Nothing has really changed in my music. But I can say, this project has more substance in it. My sound is still the same, and I still have that sound in my bag from the previous projects. This project was about my friend that passed away. So it was a real meaningful project—rapping about depression and being sad. It’s just got a little bit more substance, you know what I’m saying?

WALD:  Totally. When did you decide you wanted to make an album dedicated to DemonChild?

SAHBABII: It happened naturally. After he passed away, I was in the studio working on new music, but something just kept telling me, “you have to make a project dedicated to him.” Every time I got on the mic, I was thinking about him.

WALD: Could you tell me about your relationship with him? I know he helped you develop Unknownism and was your producer. Can you walk me through how you got to know him and what he meant to you?

SAHBABII: I met DemonChild when I first moved to Atlanta. I met him on Osborn Street. He was a person with no friends, and I ain’t had no friends because, I’d just moved there. I was staying with my uncle, and our family took DemonChild in as one of our own family—we already had thirteen people staying in the house at the time. Later on, when we moved away, my family brought him and his brother with us, in exchange for food stamps. He’s really been with me and my family since I was 13.

WALD: When did you start collaborating on music?

SAHBABII: We always made music for fun, just together in the house.

WALD:  I noticed he’s sampled in the beginning of “Step in the Name of Love.” Why did you decide to put him in the intro there?

SAHBABII: The beat just spoke to me when I made that song. Everything I do is based off of feeling. We knew we wanted DemonChild’s voice on this project somewhere. It was actually T3 that went through all the old files on our computer, and found an old DemonChild song with the same beats per minute as “Step in the Name of Love.”

WALD:  Your is evident in the project. Was it at all therapeutic for you to rap through these emotions?

SAHBABII: Most definitely it was therapeutic. It was my gift to him. It was a very spiritual experience. I look at that project as a final goodbye to him, because I’m never gonna mention his name again, in any future songs. It was my goodbye.

WALD: There was one bar on the album that I wanted to ask you about. It’s the Ben Simmons one on Switch: “He scared to shoot like Ben Simmons, we just checked his stats.”

SAHBABII: It was no disrespect to Ben Simmons. He’s just scared to shoot. That’s just facts. I just want him to take more shots, that’s all.

WALD: Are you a Sixers fan?

SAHBABII: No, I’m not. I’m a Bucks fan. I like Ben Simmons though.

WALD:  Do you think the Sixers should trade him?

SAHBABII: They shouldn’t trade him. He just needs to work on that jump shot. He would be good on the Nets, though. I ain’t even gonna lie.

WALD: Who you were listening to when you made the album?

WALD: Are there any songs from the album that you’re especially excited to perform on tour?

SAHBABII: “Do it For Demon.”

WALD: Why that one?

SAHBABII: That shit just got the energy.

WALD: Do you have any new music cooking right now, or are you taking a break since making Do it For Demon?

SAHBABII: I’ve got a whole new project done, but it’s not finished. It can always be better.