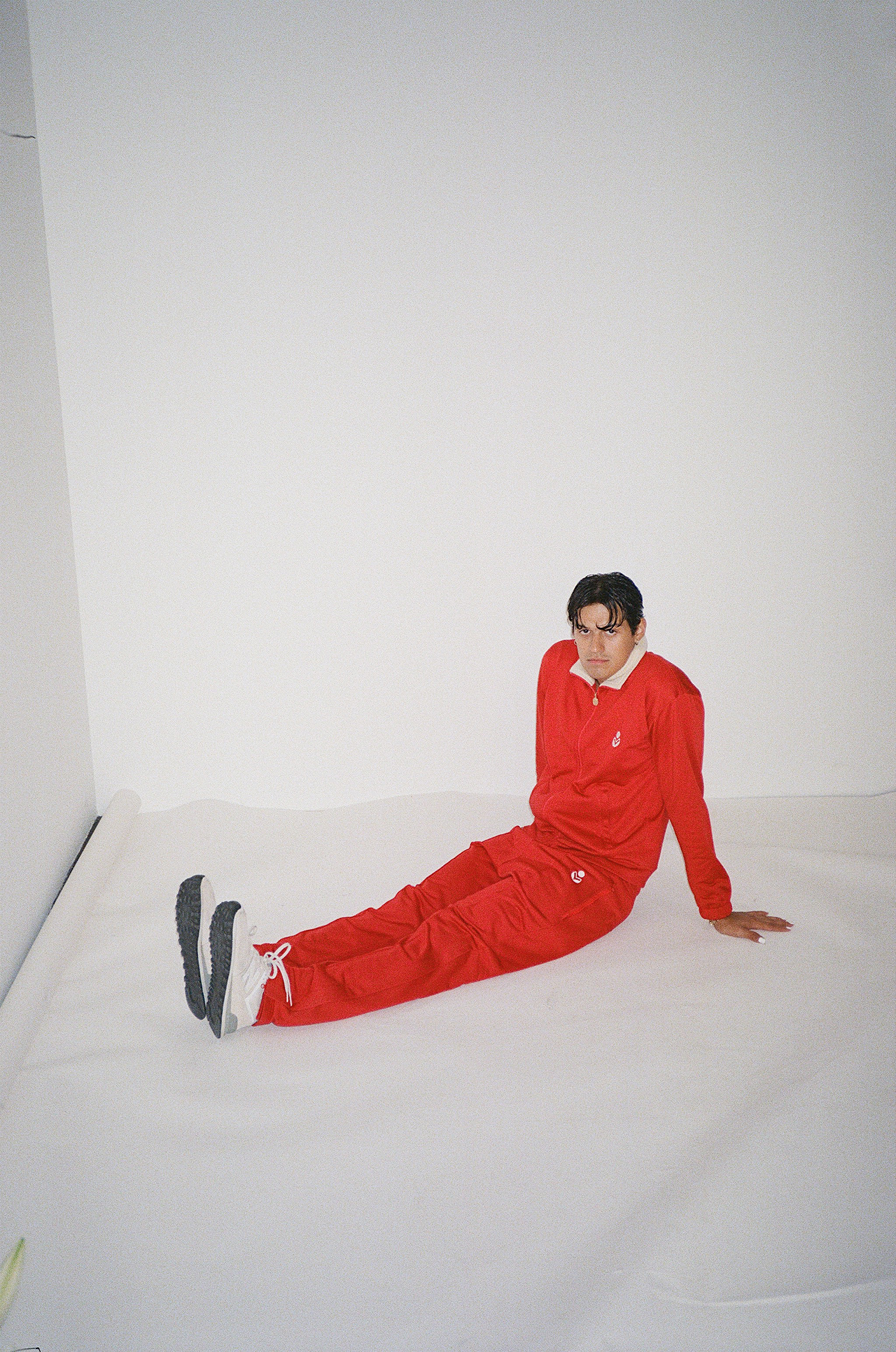 Omar Apollo wasn’t born a natural performer, but it’s hard to believe the 24-year-old Indiana native was once laughed off stage at open-mic night. Since then, through a mix of sheer determination and raw talent, the Mexican- American singer has gotten the last laugh, releasing two soft-boy heavy albums with spiky edges. Now, he’s ready to belt his heart out on his long-awaited third album. In between studio sessions and earthquakes, the young star found time to check in with Interview editor-in-chief Mel Ottenberg. – ERNESTO MACIAS

MEL OTTENBERG: Let’s talk about candy. Do you like chewing gum?

OTTENBERG: What kind of gum, Omar?

APOLLO: I like a mint one. The thing about the mint gum is because once it’s bubblegum, it starts hurting my jaw and shit. So I just keep it simple with two or three pieces max.

OTTENBERG: I believe you told me before that you do two or three pieces max and you don’t smack. You’re classy.

APOLLO: I’m pretty with it.

OTTENBERG: Will you tell me about your clothing line?

APOLLO: I started a clothing company with my friends called Sky Parlor and we’re working on the release of it and stuff.

OTTENBERG: What are you listening to? Is there anything weird and random that you listen to all the time? What are your main influences?

APOLLO: I just recently really got into Cocteau Twins, which has been every day.

OTTENBERG: Hot. You should find “Garlands”  by Cocteau Twins. It’s my favorite song by them. It’s really good, I don’t know what album it’s on, but it’s streaming.

APOLLO: I found it.

OTTENBERG: It’s a deep cut. What else?

APOLLO: I’m into Radiohead and I’ve been listening to a lot of Aretha Franklin right now.

OTTENBERG: I’m into it. What type of car do you drive?

APOLLO: Do I drive?

OTTENBERG: You live in L.A., right?

OTTENBERG: Is driving boring or fun?

APOLLO: I love driving. It’s a nice escape, you know? That’s how I consume music. I don’t really listen to music unless it’s in the car. OTTENBERG: You love to perform, right? I just met you so I haven’t seen you perform, but I’ve heard that you really are very into it and look super happy on stage. Were you a born performer?

APOLLO: Born performer, no. I’ve had really weird experiences performing, especially in the beginning. I remember one time there was an open mic and I didn’t sing very well at the time because I was nervous. People were laughing and then I was like, “This sucks,” but then I just kept doing it and it got dope.

OTTENBERG: Have you been going out and stuff? Or are you like a homebody? What’s the beat for this fall? What do you think it’s going to be like?

APOLLO: I used to hang out with my friends really often. We’d go to Malibu and just stay out there for the weekend. It’s mostly just people I know, though. I’m not in the stage of my life of meeting new people and hanging out with them, but maybe next summer I will.

OTTENBERG: Where is Indiana?

APOLLO: Indiana is right next to Illinois. It’s like a two-hour flight from New York.

APOLLO: I know Michael Jackson grew up down the street from my house and then Freddie Gibbs and James Dean are from Indiana. But, people leave Indiana.

OTTENBERG: Do you think that growing up somewhere that is way out of culture is actually really good for being someone to create culture later?

APOLLO: It definitely is.

OTTENBERG: Wow. And then when you got out of there, where’d you go?

APOLLO: I moved straight to L.A. I was making music there for a sec and doing shows at house parties for a while. And thenI started putting out music and people started hitting me up to do shows in different places. Then I went on tour and it snowballed from there.

OTTENBERG: You were just in Mexico, right?

OTTENBERG: Oh my god, wait. Did the earthquake happen when you were there?

APOLLO: I was there. It was fucking scary.

OTTENBERG : Where were you when it happened?

APOLLO: I was in the hotel chilling with Dylan, my manager, and we were just watching YouTube videos. We had just smoked and shit so we were in that vibe and then all of a sudden the earth starts shaking. I didn’t know what to do because I’m not experienced with the earth, so then I just stood up and I was like, “You feel that?” He’s like, “Yeah, I feel that.” And I was like, “What do we do?” and then he’s like, “We’ve got to go outside.” We started running down the halls and then the lights are flickering, shit’s shaking, it’s fucking scary. It felt like a boat was sinking. We get outside and there’s people outside without their shoes on and people in towels. I don’t know how long it was, but it felt like forever. Shirt by Marcelo Burlon County of Milan. Pants by Dickies. Belt Stylist’s Own.

OTTENBERG: That is so scary. I’ve been in two and they were both drama, but not like a real danger. Once I was in Tokyo and I was on the 47th floor of my hotel, but the hotel was designed on bearing balls so that the entire hotel moves back and forth. You’re literally on a roller coaster. It’s designed like that so that it doesn’t fall over. I was in one in September in L.A. and it was just so depressing. I was like, get me the fuck out of L.A. right now. You know, the Big One’s supposed to hit L.A. in October and I heard that all of the people that are deep into astrology and shit are getting out of L.A. in early October,. Maybe October 8th was what I was told, I don’t remember.

APOLLO: Bro, I’m definitely not going to be here on October 8th. I guess in Mexico there was an earthquake the same day last year. It’s always in September in Mexico for some reason.

OTTENBERG: It’s so scary. Before that happened was Mexico City great? I really want to go hang out there.

APOLLO: It was great, it was cool.

OTTENBERG: Cool. What are you doing today?

APOLLO: I’m just at the crib. I’m about to go to a studio in a little bit, I just ate.

OTTENBERG: Is there one abstract feeling about what you want to do with your album that you can share with me?

OTTENBERG: What’s the vibe? Because we’re getting you early.

APOLLO: I sing on every song, but I feel like I’m singing on this album. When I do these shows I’m going to have to really do vocal warm-ups. I’m really in this bitch, singing on these songs. I’m belting.

OTTENBERG: Wow, okay. Is it happy belting? Is it wailing? Is it joy?

APOLLO: It’s wailing. It’s the classic longing wailing that… I don’t know how to explain shit. I’m not good at it usually, I’m better at just making it.

APOLLO: I swear, that’s the way to go. That’s how you should live. It’s like if you know, you know.

OTTENBERG: I think it’s really good to be really respectful of other people, but also to yourself and do what you think is the right thing as opposed to like, “Oh, is everyone going to like this?” or “Oh, this is going to land really well on social or whatever?” It’s just not that.

APOLLO: People like me for authenticity, more than, “Is it with the times?” I don’t know.

OTTENBERG: You got to create the times. What are you doing tonight?

APOLLO: After the session, I’m probably just going to do some organizing at the house because I just got back from Mexico yesterday. Then do some work, maybe get some references, it’s boring shit. Probably watch a movie that I haven’t seen, like My Best Friend’s Wedding, which I’ve been putting it off. Turtleneck and Gloves by Prada. Pants by Dickies.

OTTENBERG: Wait, My Best Friend’s Wedding is the one with Julia Roberts?

OTTENBERG: Julia Roberts, Dermot Mulroney, and Cameron Diaz. I watched it recently in bed on a date and it went well.F

APOLLO: Should I watch it or not? Am I wasting my time?

OTTENBERG: I mean, it’s dumb. Wait, didn’t you tell me that you love The Godfather?

OTTENBERG: The Godfather 2 is the best movie, you should see that.

APOLLO: You said the second one’s the better one?

OTTENBERG: Yeah, Godfather 2 is the greatest sequel of all time, undisputed.

APOLLO: Okay, I’ll watch it. Because I watched one and it was great, but if it’s going to be better I’m with it.

OTTENBERG: Do you sing in the shower?

APOLLO: I used to.

OTTENBERG: Do you do karaoke?

OTTENBERG: Do you have some go-to’s?

APOLLO: I did some Selena songs, “Amor Prohibido” (singing), that one. And then, the last time I did karaoke I did “California Dreaming.”

OTTENBERG: Very good. All right, well listen, good luck out there, good luck with your album. Don’t get in any more earthquakes and we’ll see what happens in October.

APOLLO: All right cool. I’m going to be gone on October 8th. Jacket and Shirt by Louis Vuitton.