ALEXANDRA WEISS: Tell me about the new record. What inspired it?

JACOB FABER: We wanted to use everything we had learned and how much we had grown on the road and take all of that experience and put it into this new record and focus on the songwriting aspect of it, just letting these songs evolve and grow into what they need to be.

WEISS: How would you compare it to your last album?

NICK KIVLEN: The biggest difference is that we wrote and recorded it during a specific time frame. Our first record was just a collection of songs we had written over the course of our first couple years as a band. So, this was our first time sitting down and writing an actual record.

FABER: Yeah. That’s a huge difference because for this record, it’s almost like we created this own little world for these songs to live in.

CUMMING: Thematically, also, there’s a lot running through it. We were inspired by the current environment, and everything happening in the United States. So, it’s a lot about our experience and everything we’ve been going through since the election. I mean, we’ve been on tour basically non-stop, and we spent a lot of time talking to our fans, and to each other, about the election and all of the things that have transpired since then. I think a lot of what we’re saying on the record are things we wish we would’ve said to them, and in a lot of ways, to ourselves, because we’re all in this together.

WEISS: What was it specifically about the election, and about the current political climate, that you’ve been responding to?

KIVLEN: The most immediate factor, and probably the most pressing thing on our minds when were trying to get into the headspace to write this album was the fact that we spent pretty much all of September, October and November leading up to the election traveling around the entire country. So, we were witnessing all of the divisiveness and volatility, and how much the election was weighing on everyone. We met so many people our age and younger who were just genuinely concerned and afraid of the future, and what America was going to become. It was such an uncertain time with this huge, looming threat of backwards and ignorant thinking being perpetuated by the potential president. So, that was weighing heavy on us when we went in to start writing songs.

FABER: The way I’d describe the feeling was just heavy. That tour opened our eyes. In New York, you know, it’s easy to get stuck in this little liberal bubble with all of your friends, but even 70 miles away in Pennsylvania, things are different. That was eye-opening and just made the whole thing feel really real.

KIVLEN: “Crisis Fest” is absolutely the most overtly political song on the album. But I think there’s also a lot of subtext there that was shaped by what we’re going through. 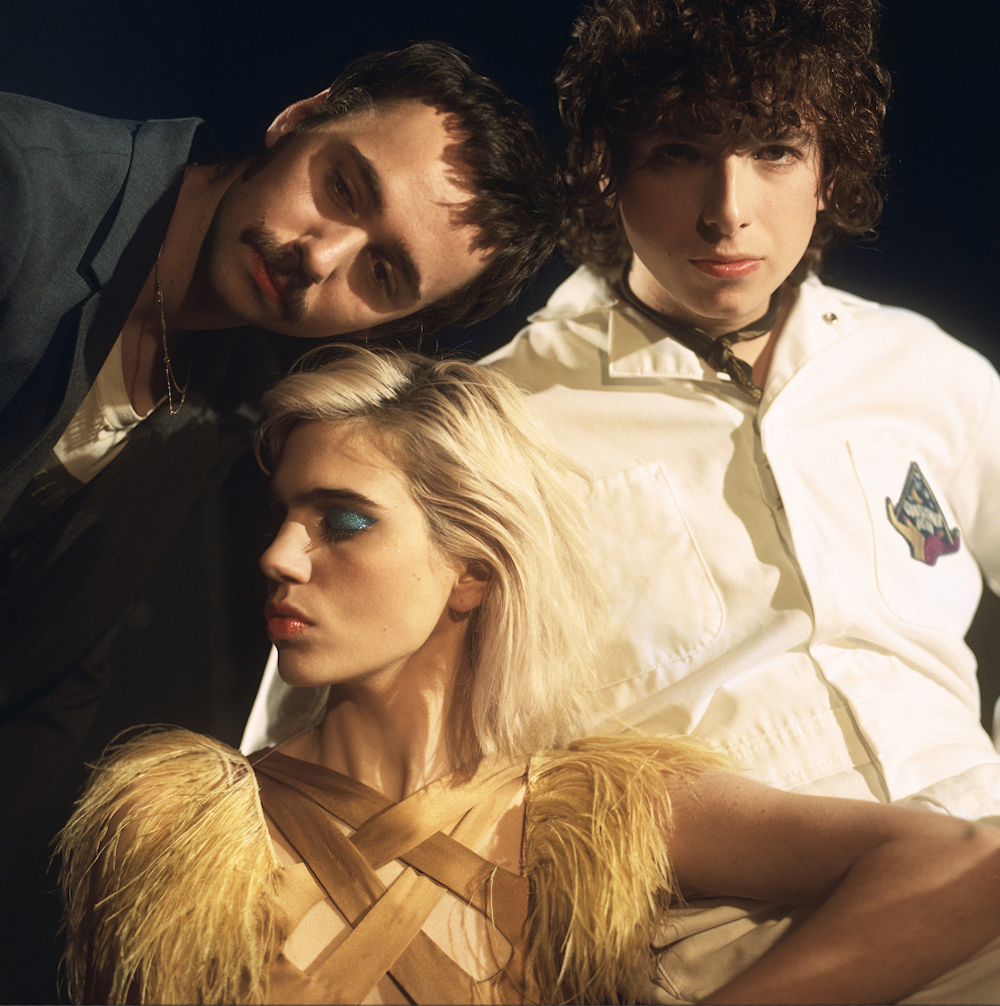 WEISS: Sonically though, how do you think Twentytwo in Blue lines up with your previous releases? In my mind, it’s definitely a departure from the more lo-fi garage and shoegaze sound of tracks like 2016’s “Easier Said.”

KIVLEN: When we finally finished touring at the end of 2016, we were quite honestly, kind of sick of our sound. It was a lot of chorus-heavy guitars and ‘80s-inspired tones that we just wanted to throw out and start over with something different and new. So, we bought all new gear and new guitars, and just wanted to see where it would take us. As far as songwriting, we wanted to rely less on tricks and little signature things we’d done in the past, and just focus on writing good, meaningful music.

WEISS: So, how do you describe your new sound?

KIVLEN: It’s kind of hard to put one tag or label on our music. I know a lot of people like to make up crazy run-on genres, but it’s hard to do that with us because we have so many different influences.

WEISS: Being three individual songwriters, how does your process work?

WEISS: When you first started, Sunflower Bean got a lot of buzz, partly due to who you are, Julia, as a model, but also because fashion seems to play a big role in how you identify as a band. Has that affected how you choose to present yourselves? Like, do you try to stay away from certain things because of your fashion background?

CUMMING: Whenever you get any kind of success—not just from music or modeling, but from anything—there’s an initial reaction that makes you want to reject it because you don’t want to feel defined by it, you know? Especially with musicians — and female musicians, or artists in general—you never want to feel like you’re being put in any kind of box. But one thing I dislike is when people do something then don’t stand behind it. So, for me, when it comes to my career in fashion, I’ve always been very straightforward about the fact that I love fashion. I don’t feel like myself if I’m not using my style as a part of my art. Of course, fashion gets complicated because it’s commerce, and the monetization of style. But I stand behind everything that I do and that I’ve done. Also, when it comes to my music, I’ve given everything that I have as a person to create it. So, there’s nothing anyone could say—like, “Oh she’s not good at bass,” or “Oh she’s famous because she’s a model” or whatever. In my head, I know that’s not true because I give it my all every time I get onstage.

WEISS: So, your style is just another facet of the band.

KIVLEN: Yeah, and honestly, when we started playing shows, we looked at the way we dressed as a kind of a rebellion against what we were seeing everywhere. Bands in Brooklyn were getting onstage wearing jeans and t-shirts. So, we wanted to take a whole different route.

WEISS: Do you take the same approach when getting dressed for stage?

CUMMING: When it comes to my style, something I’ve always thought of as my own kind of rebellion is this idea of like, “Why can’t I be feminine? Why can’t I honor these parts of myself? Why can’t I dress the way that I want to and still be taken seriously?” I don’t have to wear jeans to be a good bass player, and I’m not a bad one if I like to dress up. So, for me to dress how I want, to present how I want, to be skimpy, to be covered, to be anything, and also be the best bass player and singer I can be—that, to me, is the height of my feminism because that’s me not just being a woman, but a person. It’s me being free and embracing all sides of myself.

WEISS: Right, and it’s a unique thing for female and femme-presenting artists to have to consider what they’re wearing and if that will somehow delegitimize them.

FABER: That’s not our problem. We don’t care.

KIVlEN: It’s gotten better even since we started. We definitely get a lot less questions like, “What’s it like to be in a band with a girl?”

WEISS: Do you think that’s because the industry is changing? Or is it because this is your second album, and you’ve somehow already “proven yourself”?

WEISS: How do you think you’ve grown as artists?

FABER: After every show, every tour, we always feel like we’re improving. So, it’s more of a constant growth. That, in conjunction with our own maturing has brought us to where we are now as a band, which is a cool place to be. And we’re not slowing down any time soon.

SUNFLOWER BEAN’S LATEST RECORD TWENTYTWO IN BLUE IS OUT NOW.