By Genevieve Glass and Maxwell 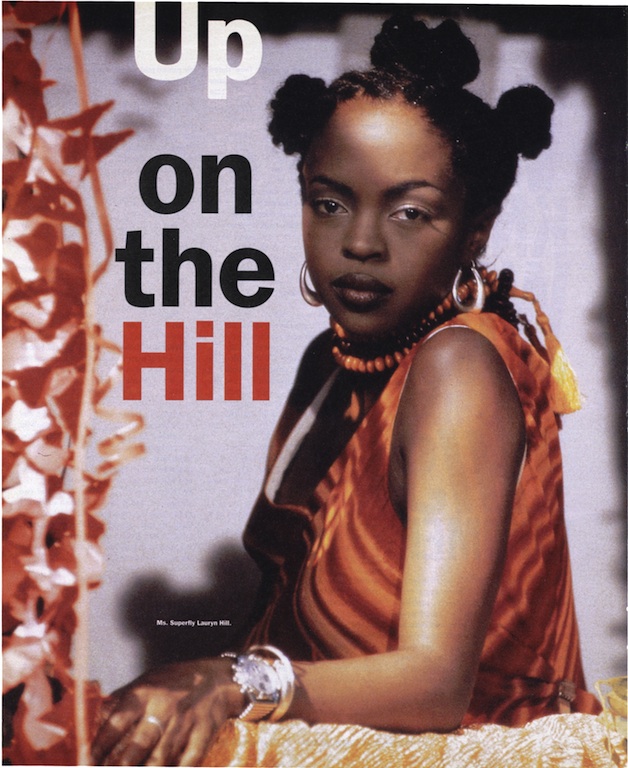 Ms. Lauryn Hill has never been one to mince her words. As of late, her run-ins with the IRS and incendiary open letter have overshadowed her true gift: music. Despite the way she is perceived through the media, Hill’s unwavering fortitude and authenticity is something to be admired.  Although she’s currently in the clink, things aren’t all bad for the musician. Hill recently signed to Sony and is set to her first studio album since her debut over 15 years ago.

In the meantime, we wanted to go back in time to Lauryn Hill’s post-Fugees prime. The year is 1998, and Hill is about to release her phenomenal solo album, The Miseducation of Lauryn Hill. She sits down with her good friend, neo-soul singer Maxwell, to discuss duets and love for Interview. —Genevieve Glass

Up on the Hill
By Maxwell

Lauryn Hill helped make the Fugees a band that people aren’t tired of hearing or watching.  Here she shoots the breeze with Maxwell, whose mix of sweetness, soul, sex, and style has also sent him into heartthrob orbit.

LAURYN HILL: How you doin’, Maxwell? So, musically, what’re you up to right now?

MAXWELL: Musically? I’m trying to do a duet with you.

HILL: [laughs] I like a brother that cuts to the chase. So what will we sing about?

MAXWELL: We’ll sing about what we have inside.

HILL: Which is love.

MAXWELL: Who are you feeling strongly about, like back in the day, as far as duets are concerned?

HILL: I have a couple of all-time favorites: Donny Hathaway and Roberta Flack, Marvin Gaye and Tammi Terrell.

MAXWELL: You know what’s so fly about those songs?

MAXWELL: Around that time, the [Vietnam] war was on, and there were a lot of soldiers with sweethearts back home. They could live through the music and hold on to the fantasy.

HILL: They touched on some real topical issues. Take “If This World Were Mine”—all you have to do is run through the titles and it’s all there.

MAXWELL: I wonder if that kind of love still exists.

HILL: Of course that love still exists! Come on, leave all the pessimism. Let optimists rule the world.

HILL: It still exists, man. We just aren’t on tap with it. A lot of us are too busy focusing on what we think people want to hear, as opposed to just saying what’s in our hearts.

MAXWELL: I hear you. For me to get raw, though, at this point in time, is difficult.

MAXWELL: You look for somebody who sees you. Who sees beyond everything that’s perceived as you.

HILL: That’s very true. Being young and female in America, you watch a lot of TV and you grow up on false images of what love truly is. We think the man with the best rap will protect and save us, about it’s not usually that way. Then you learn love is something deeper and purer in form.

MAXWELL: I hear that, but it’s a hard thing for me. I think I just kick back and live in that romanticism.

HILL: But Maxwell, you see those ladies. They look up at you and your whole persona and they just flip their wigs. [Maxwell laughs] Let me tell you, just for the record, when you have a show in New York, could you just not promote it in my neighborhood? ‘Cause all the girls harass me to get tickets. I’m tired of that. I have to turn my phone off when you come into town.

MAXWELL: [laughs] Oh, come on. You, Ms. Superfly Chocolate Cocoa, giving me rhyming skills, and then giving me vocally and intonation and enunciation and phrasing on top of it.

HILL: Listen to you! [laughs] OK. Well, just do what you gotta do to not advertise in my neighborhood. You’ll make the sales up somewhere else.

MAXWELL: You were fly even before you became known, so you still got all of that. But for me, comin’ from high school and not gettin’ no looks, no play, no love, nothin’—it’s a trip.

HILL: Just for the record, when we’d go on after you, I’d only catch you as you were walking off stage with your band. Then, once I came in time for your set. Next thing I see, the lights come on, you turn around, and you’re just giving up body, dancin’ and singin’, and the shirt is open and the hips are movin’ and I thought, Oh my God! And the ladies was screaming, the lights were dim, the candles were on. You took me by surprise. You made me blush! I started screaming. All this time I’m thinking this man is shy. I’m talking to him sensitively and delicately and here he gets onstage and just controls it.

MAXWELL: Is this the same person that’s just, like, giving the legs and shit onstage?

MAXWELL: Let me check the record. Is this the same person that be comin’ onstage kicking the legs? You know what I’m talking about. That’s like the signature L boogie move. Yo, don’t even try.

HILL: Part of the reason we identify with each other is because we both know the gift is from God. All praise should be given to Him. It’s cool if people give us kudos and accolades, but we know who is responsible for everything we do. We’ve also got to protect the music, and make sure it never gets exploited and turned out like doughnuts of something.

MAXWELL: It’s a hard thing, but you can remain focused and consistent. Particularly you, with your style and what you’re doing musically. You’ve kept your Africanism to such a strong extent that it’s beautiful again.

HILL: You know when I was proud of you? When we did that tour of black colleges together, I thought: Not only has this kind of music not been done in a long time, but usually you see guys that player-hate the one who comes off as sensitive to women—the guy who actually listens and doesn’t throw her issues out the window. So here you are onstage, facing a bunch of students, but some hard rocks in the audience: I was so happy when everybody just opened up. This was before you had songs on the radio, see, so I know it’s significant.

Our podium, what we have to speak from, is the music. It’s really important that we stay focused, because things become misconstrued in the media. So we have to stick firm to who we are, and stand our ground musically. We have to make sure the music and the message and the words and all the elements come through in our songs and every time we appear in public.

MAXWELL: It’s about giving people their own imaginations via the music.

MAXWELL: So what’s up with that duet we’re gonna do?

HILL: [laughs] Yo, I’m coming back to New York in two weeks.

MAXWELL: All right, you gotta come through.

HILL: So you gonna check me?

THIS INTERVIEW ORIGINALLY APPEARED IN THE FEBRUARY 1998 ISSUE OF INTERVIEW.