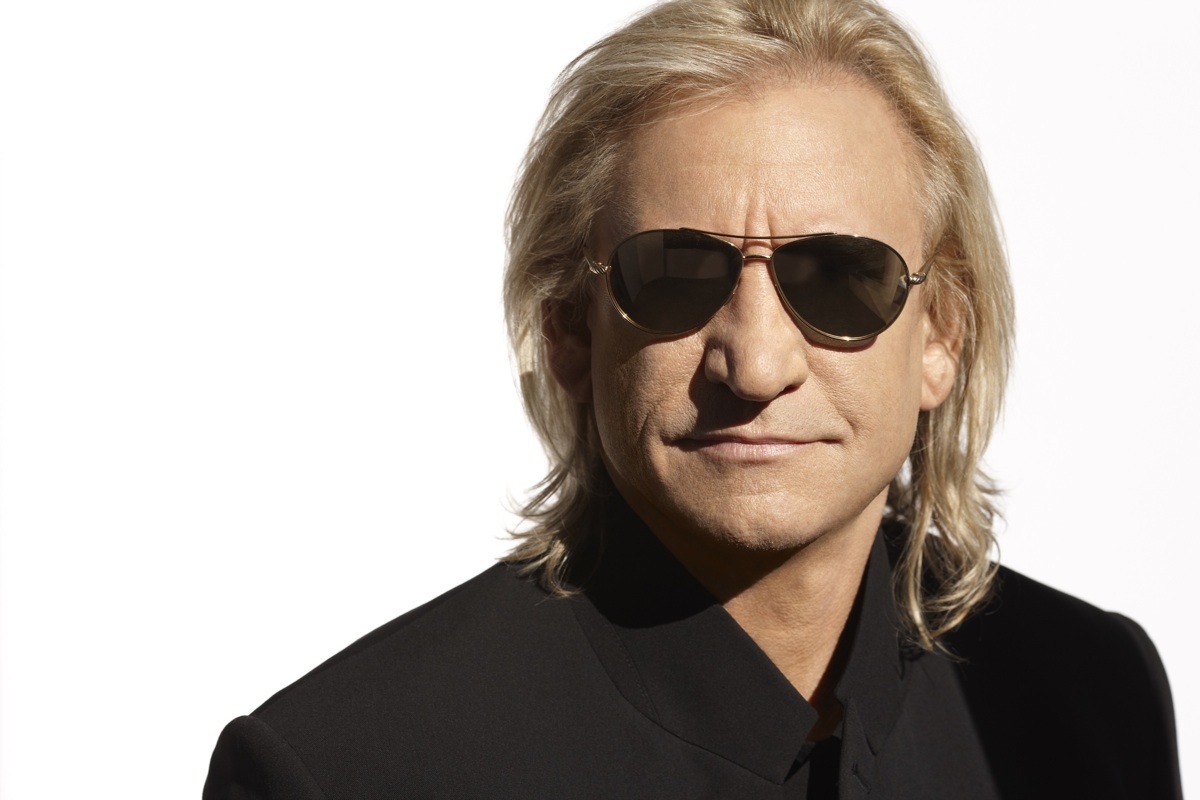 “Where are you?” Joe Walsh asks me over the phone. “I’m in Los Angeles,” I reply.

Perhaps the sentiment is unsurprising, given that Walsh is best known as the guitarist for the Eagles, one of the quintessential LA bands of the 1970s. He has arrived early in New York in anticipation of his solo performance Monday at the Iridium. Earlier this year, he released Analog Man, his first solo album since 1992. It’s an album of renewed vigor and some unexpected nods to contemporary music trends, although he is lyrically preoccupied with being a 64-year-old artist who pines for the days of long hair, vinyl albums, and old school rock-‘n’-roll radio.

The one aspect of his heyday he doesn’t miss is the drugs. Walsh battled alcohol and cocaine addiction for over two decades, finally cleaning up before the Eagles reunited in 1994, after 14 years and the declaration that they would get back together “when Hell freezes over.”

“We went out and toured around the world at least three times. It’s been a full-time job,” he says. “But I love it. And now I have lived sober long enough and learned how to do it all without drugs.” With this mindset, Walsh plans to keep busy with another solo release and a possible Eagles 40th anniversary tour next year.

DANIELLE BACHER: You recorded your last solo album 20 years ago, while you were still struggling with drugs and alcohol. What’s it like doing it completely sober?

JOE WALSH: I’ve been sober for 18 years now. It wasn’t like you flick a switch, and you’re sober. It takes a while. You have to learn how to do everything all over again. You can measure how long that takes in terms of years. What I didn’t know at the time was how to write music and do rock-‘n’-roll and live rock-‘n’-roll and record sober. I didn’t try to do that at first. I learned how to take care of myself and then play in front of people. I didn’t tackle going back to rock-‘n’-roll until I had some sobriety under my belt.

BACHER: Why was it the right time for you to put something out on your own?

WALSH: The timing last year and this year was really good for me to not just work on a solo album, but to actually finish it and put it out. You can work on an album forever, but finishing it is a whole different deal. [laughs] Once I got into that mode, it moved along, and it’s done really well. The message from Analog Man is that I’m back, and it won’t be 20 years until the next album.

BACHER: How was it working with your brother-in-law Ringo Starr on “Band Played On” and “Lucky That Way” from the new album?

BACHER: You had a lot of famous musicians appear on the album. One that stuck out to me was Tim Armstrong from Rancid. How did you two hook up?

WALSH: Well, that’s a funny story. We actually have the same lawyer, and our lawyer told us that we should work together. I thought, “Why would I want to work with that guy?” We got together, and we got along great. We have a bunch of musical stuff in common. “Hi-Roller Baby” was the song he had been working on with this up-and-coming female artist L.P. (Laura Pergolizzi). They needed someone to sing on the demo. I really got to know the song and it came out really good–it’s different than anything else on the album. I hope I get a chance to work with him some more. He’s a good songwriter and musician, and very underrated.

BACHER: Was there a hesitation to work with him because you are so different in terms of your musical styles?

WALSH: Well, there wasn’t really a hesitation. If my lawyer had not recommended it, it would have never occurred to me. He said to me, “You guys should really work together. I think it would work.” And I do well when I listen to my lawyer. I thought it was something that I should check out, and, in retrospect, he was right.

BACHER: You’ve been in three successful bands: the James Gang, Barnstorm, and the Eagles. Which was the most enjoyable?

WALSH: Well, they all were enjoyable. The one that achieved the greatest amount of success is the Eagles. And because it was really successful, it was a lot more fun. It still is. We get a chance to play music that a lot of people really relate to, and to play places all over the world. That’s fun.

BACHER: How about your solo work?  What do you like about it?

WALSH: I enjoy my solo career because I get to play smaller places like clubs and theaters, and the interaction with the audience is much higher quality. It also sounds better than a baseball stadium. Everybody has a good seat, and I don’t have to play a specific part like I do in the Eagles. When I go out and play solo stuff like the Analog Man tour, I get to play it differently every night, make up parts as I go along and play more freely, which is really rewarding. I have the best of both worlds. I’m in a really big, popular band, and that’s really good for my ego, but I also get to play my solo stuff and a lot of fans come out. It really makes me feel good.

BACHER: Would you ever consider recording an album with your daughter Lucy Walsh?

WALSH: Yeah, I would. I would like to work with her more than I have. She’s been kind of on her own path. She’s done a lot of work in Nashville and gotten to know some songwriters down there and written with them. I never really took on a project with her, but I guess that’s because we haven’t gotten around to it. I would like to go in the studio with her and oversee and produce her, and I don’t see why she couldn’t sing on some of my songs, too. She has a great voice, and I’m very proud of her.

BACHER: I know your daughter Emma passed away in 1974 at a very young age. Has that affected your songwriting and life perspective?

WALSH: It affected my life perspective in that probably the worst thing that can happen to someone is losing a child. That happened to me, so I know. That was a long time ago, and I’m at peace with it now. I wrote a song for her on my album So What. It’s called “Song for Emma,” and it was a kind of goodbye to her. That song was good because it gave me closure on it, and I could move on. I think of her often, and she was a good little kid. Having had that experience, sometimes I am in a position to be able to comfort people. I’m in a position to put an arm around them and tell them they are not alone. I’ve talked to several parents whose sons were killed in Iraq or Afghanistan, and they know about my daughter. Sometimes they’ll contact me to let me know their kids were killed in the war and that they were fans, or that my music really helped them deal with their grief. That’s a good thing that came out of it.

BACHER: Stevie Nicks has described you as the “great, great love of [her] life.” What do you think of that statement?

WALSH: [laughs] I’m very humbled by it. She’s a great songwriter, a great singer and a great person. We spent about a year together, and she helped me write a bunch of music, and I helped her write her music. We had a great relationship. Romantically, it shifted, but in terms of friends and respect for each other, that’s all still there. She’s really a great person. Anybody who knows her will tell you that. And she’s a national treasure. Anything she sings, you immediately know it’s her. If it’s on the radio, you don’t change stations, you listen to it.

BACHER: You’ve been married several times. Is your current wife, Marjorie Bach, the one?

WALSH: Oh, yes. Absolutely. Marjorie, I feel, is a part of me that was missing and I guess when you find the right partner, you realize that this is the part of you that was missing. So what I’m doing now, I didn’t know how to do before I was with her. She made it possible.

BACHER: Do you have any major regrets in your career? Is there anything you could have done, but didn’t?

WALSH: I don’t have a lot of regrets. One thing I always really wanted to do was play guitar for Ray Charles. I grew up with Ray Charles, and of course, he was as good as it gets. I always wanted to play for him, but he passed away before I got a chance. I wish rather than waiting for that to happen, I had called him up and said, “Ray, I’m coming over!”

BACHER: Do you have any Eagles-related news you would like to share? Can we expect any new music in the near future?

WALSH: Eagles plans? Well, here is what we are doing: we have archived everything from day one with the Eagles. We have it on the shelf somewhere, and by that I mean interviews and live performances and discussions and videos of us on the road.

BACHER: I heard the group was planning to release a two-DVD documentary that would cover its entire history. Is that still happening, and when can we expect it?

WALSH: Yeah, it’s about 80 percent done and should be out in January. I’ve seen a bunch of it assembled, and it’s pretty powerful stuff. It’s also going to be our 40th anniversary as a band, and, because of that, we are probably going to tour next year. No albums yet, but I am going to probably do a blues album that I’ve wanted to do for a long time with a lot of people you would recognize. I am going to start looking at that around the end of the year.

BACHER: Tell the truth: are you sick of “Hotel California” by now?

WALSH: No. I should be, but I’m not. That song is really hard to play the right way. Some of the other songs are automatic, and it’s not as exciting to play them as it used to be. But with “Hotel California,” I really have to sit up straight and pay attention to play it right. That’s one of the songs I look forward to because that it’s still a challenge.

ANALOG MAN IS OUT NOW. JOE WALSH PLAYS MONDAY, OCTOBER 8 AT THE IRIDIUM IN NEW YORK. FOR MORE ON THE ARTIST, VISIT HIS WEBSITE.