Jessica Pratt on Her Own Love 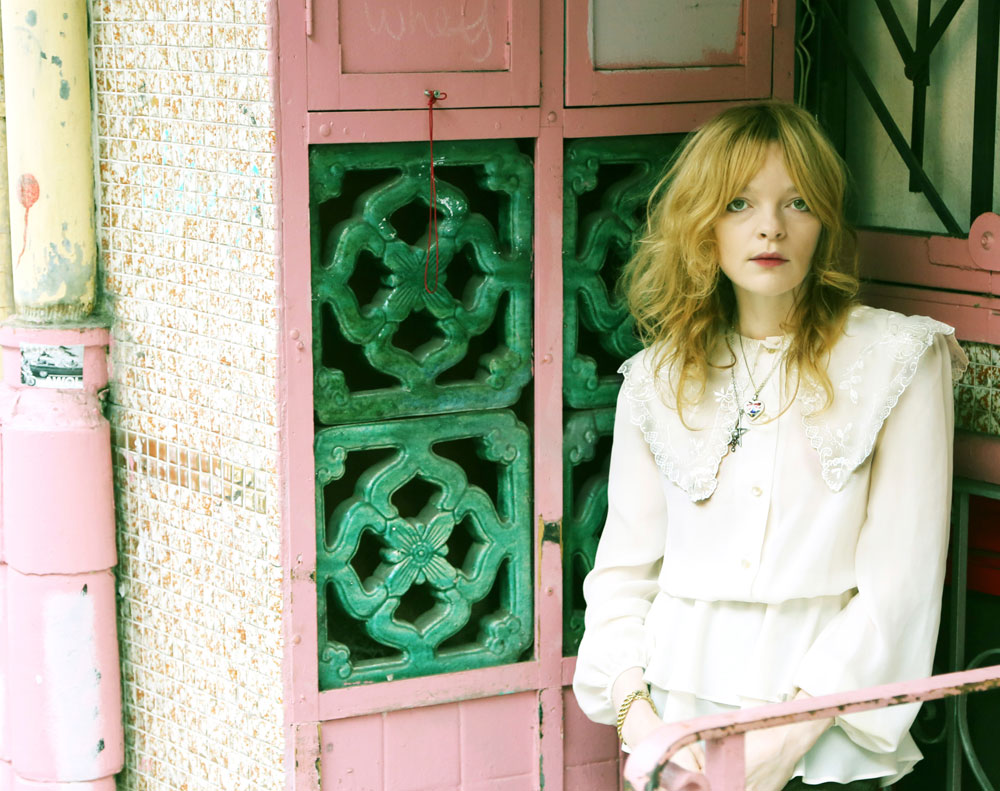 When Los Angeles-based singer-songwriter Jessica Pratt used to imagine her future, she always thought outside the box. “As far as a regular career, like something tangible or academic, I never really daydreamed about that kind of stuff,” she explains. “Anything that embraced fantasy was appealing to me.” Pratt’s sophomore album, On Your Own Love Again (out last week via Drag City), showcases that magical sensibility: listening to her ethereal, hypnotic folk songs feels like having a pleasant dream. Her vocals, which sound both youthful and mature, soar gently above richly layered acoustic guitar lines, and her lyrics conjure a separate world: “Moon Dude, you can try the weight / Of your body now in outer space.” But she says the imaginary reality she creates is always drawn from personal experience: “I can’t really write a song that isn’t at least emotionally based in something real.”

We spoke with Pratt about how she developed her sound, which artists inspire her, and how she plans to move forward.

EMMA MUNGER: How did you initially get interested in music?

JESSICA PRATT: My mother was a pretty hip lady. She was more up on current artists than I was when I was a teenager, and she introduced me to Brian Jonestown Massacre and artists like that. But my own personal musical journey started when I was about 13. I listened to a lot of oldies, and I read [the Led Zeppelin bio] Hammer of the Gods by Stephen Davis, which was like an initiation rite.

MUNGER: When did you start playing and writing?

PRATT: My brother got a Stratocaster when he was in his teens and eventually lost interest, so I would pick up his guitar and play around with it. My mom noticed my interest in it and found a $40 nylon string guitar in a thrift store. I started playing it all the time. It was really dreamy sounding, which I liked. At that point I was listening to Donovan and T-Rex, and I just started to make little songs.

MUNGER: Was there a specific moment when you decided you wanted a career as a musician?

PRATT: It definitely became a career unexpectedly. I always wrote songs, but I did it without evaluating why. Of course, I idolized various musicians, but I never really envisioned it for myself. Tim Presley [founder of the psychedelic rock band Darker My Love] putting out my first record was a very validating experience. He was a total stranger to me, and I liked his music a lot, so the fact that he picked my music out of thin air and liked it enough to want to reach out to me helped me really start taking myself seriously.

MUNGER: Was there a different career you had in mind?

MUNGER: Your first album was an analog recording—why did you choose analog over digital?

PRATT: It was my only resource initially. When I was 16, I had one of those handheld Sony recorders that people take to lectures. I would plug my electric guitar and microphone into my amp, sing and play through it, and record that sound on my little tape machine. The recordings were kind of distorted, and it was unintentionally lo-fi. But I grew up listening to tons of classic albums on cassette since I commandeered my mother’s tape collection, so I liked that sound. I listened to a cassette of Leonard Cohen’s greatest hits a lot, and those songs have a really warm quality to them. The tape lends them a nice extra muddiness.

MUNGER: Was On Your Own Love Again recorded in analog also?

MUNGER: Who are some of your biggest musical influences?

PRATT: When I was a teenager, I listened to a ton of Marianne Faithfull. I was obsessed with her voice and saw her as an icon. I particularly liked an album that came out in the early ’70s, when she was just starting to be a junkie—it was never released because her singing was so poor. But I would try to emulate her poor singing on it. I love John Martyn too—his somber, dark stuff. And I’m constantly talking about Ariel Pink. He’s my favorite contemporary music-maker.

MUNGER: I saw him once and he was great.

PRATT: Yeah, the first time I saw him was in San Francisco at a small bar. He really blew my mind and totally changed the way I approached music. He possessed himself on stage like he was an autistic child or something—completely immersed in this thing in such a cool, unapologetic way. He’s kind of like Warhol, showing that anything can be cool or beautiful, you just have to really own it and be a freak, and it’s fine.

PRATT: I’m a slower writer. Some people can just pump it out but it’s about a three-day process for me. I work on the melody first, and then towards the end, I work on the lyrics as a separate process. Then I record, which usually takes one day.

MUNGER: How do you feel about playing in front of an audience as you do it more frequently?

PRATT: I started playing publicly when I was 19, but I did it very sparingly, like twice a year. Every time, I’d have this weeklong dread, but that dread manifested itself in a pretty useful energy when I was playing. I didn’t really feel comfortable in my own skin, and it’s still a conflicted thing for me. Playing a nylon string guitar live is difficult to mic, so sometimes because of weird technical shit I dread playing. But I like the actual process of singing and performing for people. I’d like to have some other people play with me. I’ve not spent a lot of time doing that and I think it would be really fun.

MUNGER: When you tour, will you perform these songs [from On Your Own Love Again] solo or with accompaniment?

PRATT: I’m not sure. I’ve only played with one other human being, private or public, in my life—the keyboard player that I toured with last year. He’s on this record too. I’d like to have a guitarist or someone who can tinker around with melodies behind me, and create more dynamics. It’s difficult to find the money though, so it becomes this kind of modern problem. I’d love to find a multi-instrumentalist.

MUNGER: Have you intentionally avoided playing with other musicians in the past?

PRATT: Until the last few years I’ve been pretty shy about my music. I didn’t think that I would be very good at playing with other people. I guess I’m more introverted than I thought I was. I’m never too close with many people at once, and a musical relationship with someone is a very significant one. I should learn to be better about it.

MUNGER: I think it’s a very personal thing to play music with somebody. But people can be very casual about it.

PRATT: It’s true. Some people do treat it as a casual thing, which it can be, but that doesn’t really interest me. It can be fun, but it’s very personal to try to emote in front of someone and completely let your guard down.

MUNGER: Your lyrics on this record involve a lot of fantasy. Are they also about your personal experiences?

PRATT: The fusing of reality and fantasy became the unofficial theme of the record. A lot of it is about personal stories told through a dreamlike lens. Historically, that’s what poets do, or try to do. I was going through a painful time when I first moved to L.A., and I think a lot of the songs from On Your Own Love Again sound heartbroken. But people who have listened so far don’t pick up on that, which pleases me—maybe the songs are distorted enough or more abstract than I initially thought.

PRAT: Definitely. There’s this symbol called a mandorla that historically represents the fusing of heaven and earth, or fantasy and reality in this case. That symbol is on the label of the record. I was hanging out with my friend the other day and noticed she had a mandorla tattoo on her arm and I didn’t even realize it! And then I was waiting for the bus today and there was a man with that also on his arm! [laughs]

MUNGER: How do you think On Your Own Love Again differs from your 2012 LP Jessica Pratt?

PRATT: This record was recorded completely by me. Everything was done in the way that I wanted, with enough time for that to happen. I did it all it home on a four-track in a couple of months under self-imposed house arrest. Most of the first record was recorded in a studio that belonged to a friend of a friend. It was a great opportunity, but I didn’t really know the person, so I wasn’t very comfortable. I felt very vulnerable. And there was a sense of urgency; I would do guitar and singing only, and usually just one take. I wanted to do something more layered, and that’s how I’ve approached these new songs. I think there’s a lot more depth to them.

MUNGER: Do you have a favorite track off of On Your Own Love Again?

PRATT: I really like “Jacquelyn in the Background.” A lot of unexpected things came out of that. And “Moon Dude.”

MUNGER: What does your future hold?

PRATT: If I can follow in the footsteps of someone like Robert Pollard and have the freedom not to have a day job and play music whenever I want, I’ll be happy. And I want to continue to get better at making music. I couldn’t imagine asking for more
than that.

ON YOUR OWN LOVE AGAIN IS OUT NOW. FOR MORE ON PRATT, VISIT HER FACEBOOK.