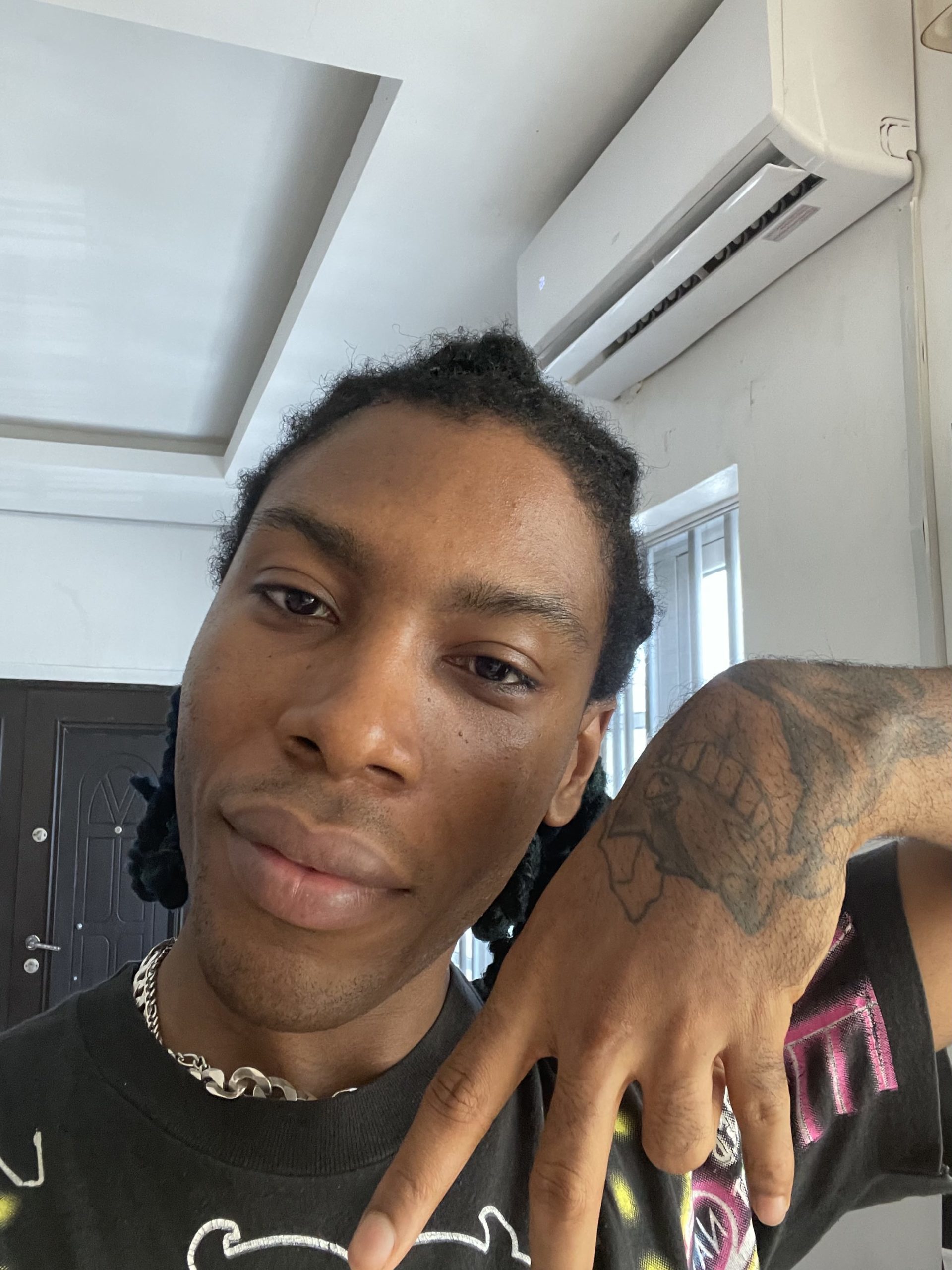 As an aspiring rapper in Lagos, Nigeria, a teenaged Osayaba Andrew Ize-Iyamu, recorded and posted mixtapes to Soundcloud with dreams of one day rubbing elbows with his musical idol, Tyler the Creator. But it wasn’t until  the 2019 release of his sophomore studio album, Mandy and the Jungle, that a then-26-year-old Ize-Iyamu—now known to his more than 100 thousand Instagram followers as Cruel Santino—found an international audience. In the last three years, Cruel Santino has captured the attention of stimulation-starved pandemic audiences with his penchant for world building, has collaborated with the likes of Gus Dapperton and Koffee, and even opened for Tyler the Creator. Earlier this month, Cruel Santino released his sophomore album, Subaru Boys: FINAL HEAVEN, to cult acclaim. The conceptual record, accompanied by a series of music videos and character reveals, draws on anime and video games to cultivate a captivating and eerie underwater universe. Below, the 29-year-old rapper talks to Interview about devil worship, spontaneous collaborations, and what’s next for Subaru Boys.

TARA KENNY: How are you feeling? I heard you were sick.

KENNY: Are you still splitting your time between Lagos and Dubai? How do the respective scenes influence your music?

CRUEL SANTINO: Yeah, I’m in Lagos at the moment, just waiting for my passport so I can go back to Dubai. Dubai is a lot like Nigeria, but more developed. The first thing you notice is the tourism and flashiness, but once you settle in with the people who spend their lives there, you discover this whole creative community. It’s a global hub, so there are people from Tunisia, Oman, Bahrain, Algeria, everywhere…all in the same city. In both places, people are striving to do what they love. I try to spend as much time as I can in both countries because they’re very key to who I am.

KENNY: Congratulations on Subaru Boys: FINAL HEAVEN. What was it like making an album in the pandemic, and how has it felt to put it out in the world?

CRUEL SANTINO: I just got a lot deeper into what I was making. The scary part about putting the album out was showing people this world I’d been building literally inside my head. I had a lot of fear and excitement. I guess that’s normal.

KENNY: Can you describe the Subaru Boys universe?

CRUEL SANTINO: While I was making this album, I was playing lots of video games. Gaming music is very interesting: when you’re playing a game and there’s a loading screen there are sounds to let you relax. It helped me understand how to use sound to make people feel things. I’m inspired by Hideo Kojima, the guy who made Metal Gear Solid and lots of other video games that feel like more than games. I wanted to make an album that felt like more than an album–something to escape into and exist in.

KENNY: You’ve said that you see Subaru Boys as an ever-evolving project with more to come.

CRUEL SANTINO: The next set of things coming are more videos and character reveals. From there I’m going to move on to the second Subaru Boys album, then the third and the fourth. Maybe even a cooking show. I will just keep going until one day I’ll be like, “I’m tired, I’m out.”

KENNY: Tell me about the first video from the album with Gus Dapperton. How did that collaboration come about?

CRUEL SANTINO: Gus was god-sent. I heard a Gus song and then was bumping him the whole week. I put him on my Instagram story, and he replied saying that he was bumping my music. I was like, “No fucking way!” We started talking and  exchanging music. I sent him a song that I just wrote called ‘I TOLD GUS I’M DREAMIN’ and he sent one back. That’s how ‘WICKED CITY’ and ‘BEAUTIFUL NOTHING’ came about. Some things you can’t plan. Half the people on this project are my friends, and half are just people whose music I came across. Everyone I worked with on the album, apart from Amaarae, was a new collaborator. It’s not about the prestige of an artist, it’s about having a real connection that you can feel.

KENNY: You’ve talked about wanting to help lift up Nigerian musicians and producers. What do you wish was different for Nigerian creatives?

CRUEL SANTINO: We’ve just been fed the same music for generations. Where I’m from, you’re either trying to rap, make rock, or indie. People ask, “Are you this or that?” I just want kids to have the freedom to create what they want from the start and not be put in a box, because so much amazing art would come of it. You can’t let your surroundings dictate your potential—just because you’ve never seen something done doesn’t mean you can’t do it.

KENNY: You’ve gone through various personas as an artist—from Ozzy B, to Santi, to Cruel Santino. Is it important to you to have these alter egos?

CRUEL SANTINO: When I started I was just rapping in my house in Lagos, dropping tapes as Ozzy. I told myself I’d meet Tyler and Frank Ocean one day. When I found indie music, it led me to new pockets of sound, and I realized I wanted to make more than just rap. Santi came from Santigold, because I fell in love with her music. Now I’m in a position where I can do everything I was once scared of doing: beats, rapping, singing. Cruel Santino is the final step of my career.

KENNY: Have people been positive about the change and allowed you to evolve?

CRUEL SANTINO: A bit of both. My core fans never know what to expect from me, because I’m always growing. They’ve championed me from the beginning and know what I can do. But there’s a part of my fanbase that loves me for ‘Rapid Fire’ and ‘Sparky’, and that’s just one side of my sound. There’s a lot of people who might be sad that I’m not just sticking to that sound, but there will be new listeners who are happy that I’ve embraced myself fully. That’s just the price of changing.

KENNY: I heard that some Nigerians were critical of how your earlier music videos used horror movie aesthetics.

CRUEL SANTINO: Definitely, and I have no idea why. Nigeria used to be all about rituals and blood money, and those were common themes in Nollywood films. As a kid, I was raised on horror and fear, and it terrified the hell out of me. I was fascinated by those stories. One day I was going to school with my driver, and he was playing this confession tape that was popular at the time. This guy was saying how he killed his brother’s children and all this. I was just a kid and like, “What the hell are you playing bro?”

KENNY: Was it fictional?

CRUEL SANTINO: No, [Laughing] not at all. The woman who used to direct all the Nollywood films claims she was once a witch but gave her life to Christ, and now she’s revealing what she did as a witch through her films. That already put fear in everyone.

KENNY: Do you have any favorites of those films?

CRUEL SANTINO: End of the Wicked (1999), Married to a Witch (2001). There’s a massive gap between our old films and our new films. So, some people might be confused by the old Nollywood video clips I use. But if you know, then you’re a true Nigerian!

KENNY: You’re reflecting the culture of what you were around. So, what’s coming up? Are you touring the album this year?

CRUEL SANTINO: I’m going to tour in the fall. Before the tour I’m going to bring out another Subaru project. But right now I’m just building the world. MICHELLE and Gus Dapperton Have a Post-Tour Dinner Party