Before the pandemic, Inhaler had a few singles under its belt and a highly-anticipated North American headlining tour teed up. But, along with the rest of their industry, the four-piece indie rock outfit from Dublin were forced to watch their carefully nurtured momentum dwindle before their eyes over a year of lockdowns and cancelled gigs. But even a global pandemic is not enough to stop four 20-year-old Irishmen from seizing their dreams—in the months since the industry began its cautious revival, the band has wasted no time getting back on the road. This summer alone, Inhaler—made up of Elijah Hewson (lead singer, guitar), Josh Jenkinson (guitar), Robert Keating (bass) and Ryan McMahon (drums)— dropped a flurry catchy singles, made their U.S. television debut on James Corden, and released a debut album, It Won’t Always Be Like This. The record went number 1 in the U.K., making Inhaler the first Irish band to top the UK album charts in 13 years. Now, they’re back in the U.S.—where they’re finally drinking age—warming up with a string of sold-out shows in intimate venues ahead of their official headlining dates. Below, the band sits down for a chat about pre-tour jitters, their shiny new gold record, and a mysterious Irish specialty known as “Chicken Fillet Rolls.”

FRED SAHAI: Congratulations on your album going number one in the UK, that’s huge.

ELIJAH HEWSON: Thank you. [The award] finally arrived. It’s not actually gold though.

ROBERT KEATING: It’s made out of aluminum, which is what Coke cans are made of.

JOSH JENKINSON: I haven’t got mine yet.

KEATING: We couldn’t afford to get four, so I don’t think I’m getting one.

JENKINSON: Yeah, just the frontman and the drummer.

RYAN MCMAHON: I’ll melt mine and split it into thirds with you boys, because I love you.

SAHAI: You guys are finally going back on tour for the new record, what are you most looking forward to about getting back on the road?

JENKINSON: Yeah. Being on a stinky bus with a lot of stinky men again. That’d be nice.

HEWSON: It is actually a really nice experience. Touring is our main desire right now. We haven’t had our group together in so long. We’re a band, but Louis, our best mate from school, he tours with us and we haven’t worked with him in ages. It’ll be nice to be on the move as a group.

KEATING: And to travel as well. Just to be out of Ireland is going to be exciting.

SAHAI: I was listening to the new record and I noticed “It Won’t Always Be Like This” is not the same version you released as a single in 2019. What compelled you to re-record it for the album?

HEWSON: We recorded that when we were 18, and since then we’ve grown up. We wanted to update it so it sounds like it does when we play it live. It’s like when you update your phone. We wanted to do the same for this song, and I think it worked.

SAHAI: Why was it important to you guys to include that song as opposed to other earlier singles?

RYAN MCMAHON: From touring and playing it live, we saw that people really respond to that song in particular. Then the pandemic happened, and the song suddenly seemed even more relevant. It took on a whole new meaning for us. We always suspected that it would be on the album. It’s always been one of our favorite songs.

SAHAI: Which song on the record did you finish the fastest?

JENKINSON: “In My Sleep,” I think. We did that in a few days.

HEWSON: It’s weird, you wouldn’t expect that to be the one that took the shortest amount of time, because it’s pretty layered.

SAHAI: Which song was the hardest to finish?

MCMAHON: “Who’s Your Money On.”

KEATING: All of them.

HEWSON: Yeah, they were all quite hard, but for different reasons. We probably did the most versions of “Cheer Up Baby,” to try and get right. The older ones definitely took the longest, because we were more attached to them.

SAHAI: You guys are doing a run of small venues in the U.S. before your official dates in March. How did that come about?

KEATING: I can’t lie to you, it’s not an original idea. We just copied some of our favorite bands that have done it before us. I think it’s every band’s dream to start in the small places that are close to where you grew up, the local venues and then try and work your way up. I think we still have got a ways to go until we get to that bigger stage, but we’re just really enjoying the early days, having the smaller shows and getting to see people’s faces.

HEWSON: We missed out a lot the last year, so it’s about making up for lost time. Also, we’ll be better prepared when we play our bigger shows.

SAHAI: Have you guys done a show since the pandemic?

JENKINSON: Not a proper one.

MCMAHON: I think our last proper gig was the week before the pandemic actually hit. It was in London.

SAHAI: The last proper concert I saw was you guys with Blossoms in Brooklyn.

HEWSON: That’s crazy. We’re coming back in September, but we thought we’d be back way more. We were saying, “We’re never going to be able to drink in the States, it’s going to take us ages,” because we weren’t 21 yet. Now we’re all going to turn 22 next time we go, it’s pretty depressing.

KEATING: Back then I could grow like one or two hairs on my chin, and now I got a little bit of stubble, which is cool. Maybe by the time we’re back I’ll have a full-grown beard. 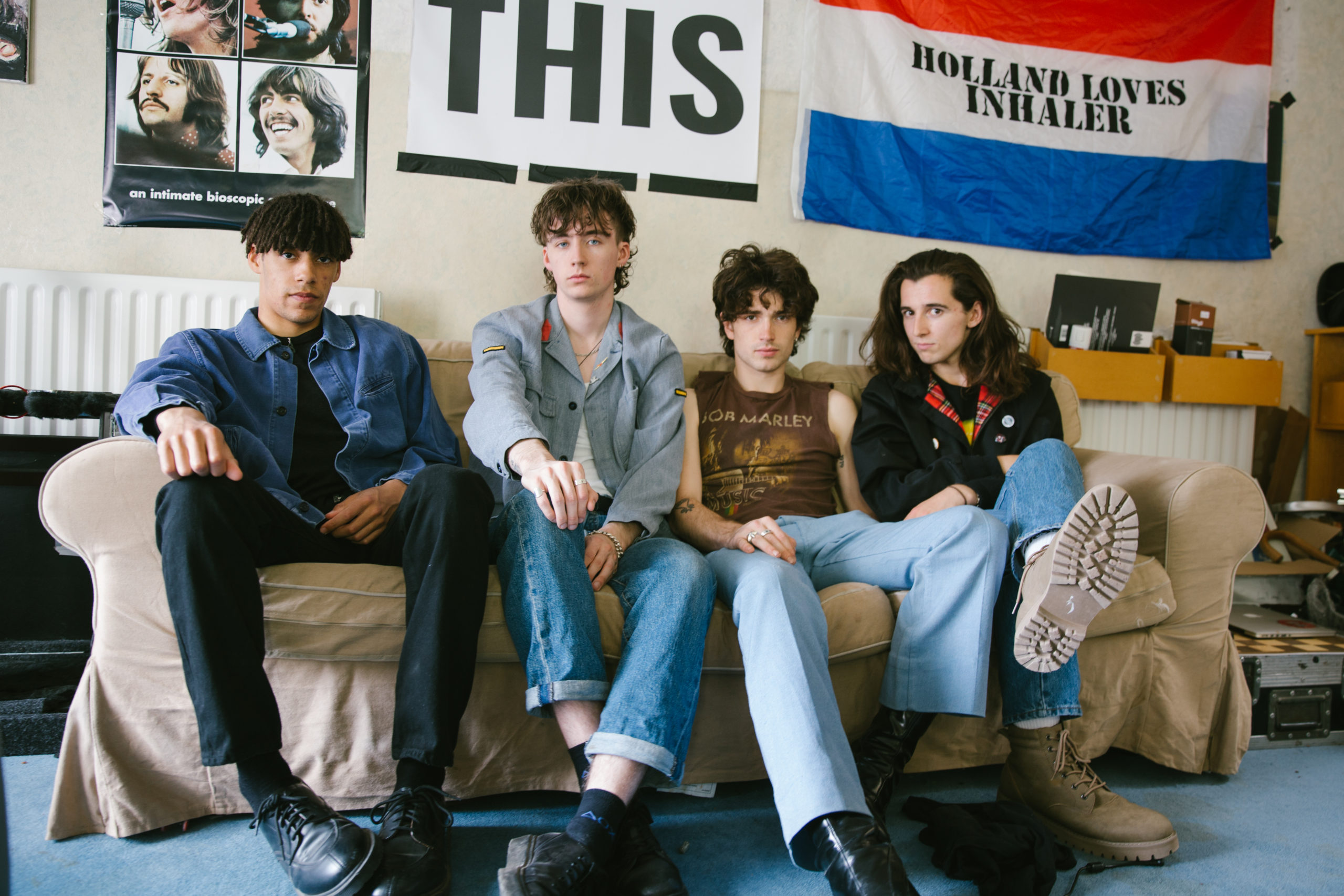 SAHAI: You’re from Dublin. What’s your favorite thing about your hometown?

JENKINSON: Something called Chicken Fillet Rolls, which you can’t get anywhere else in the world except for Ireland.

KEATING: My first answer would be the Irish people. But they’re no longer just in Ireland, there are Irish people everywhere. You can’t really escape them and they’re great. They tend to be quite friendly, so we always love coming home after a tour. There’s just something about Ireland.

HEWSON: It feels really safe. The most dangerous thing in Ireland is probably a bee.

SAHAI: When you started playing together in school, was it just for fun or did you always want to do it for a living?

MCMAHON: It was all for fun at first. Myself, Eli and Rob started playing together when we were 12 or 13, when we all met each other, but we were awful. We couldn’t play our instruments and then we met Josh when we were 16 and he kicked us into shape. That was when we kind of got the ball rolling and we started to take it a little bit more seriously.

SAHAI: Do you remember the first song you ever wrote?

HEWSON: We did “Cheer Up Baby” or “It Won’t Always Be Like This” first.  But before that it doesn’t really count because Josh wasn’t in the band.

MCMAHON: There’s a song called “I Want You” that we did when we were 16 as a school project and decided to put it out into the world. We convinced our teachers, “Oh, we’re going to work in a studio for work experience,” but we actually just went to one of our kitchens for a week to record a song on GarageBand. It was an excuse for us to just get together, eat pizza, watch documentaries, and then record music.

SAHAI: Are you guys superstitious at all? Do you have any rituals when you go on tour?

HEWSON: We play with a Ouija Board sometimes before a show. We summon the ghost of Jimmy Hendrix to watch over us and make sure we have a good gig. [Laughs] No, to be honest, we don’t have one. Before school talent shows we used to push each other around a little bit. It’s a nice thing.

KEATING: We still do that, we fight each other.

SAHAI: Do you have a dream collaboration?

KEATING: Every time we do a song together, it’s a collaboration. We can barely manage to get a song together as just us four, without killing each other. I think once we get past that and hit our groove as a well-oiled machine— which will probably be when we reach our late forties—it would be cool to do something with a rapper or something.

SAHAI: What do you do when you’re not working on music?

KEATING: It’s so embarrassing when someone asks that question because it’s like, “Oh fuck, we don’t do anything other than music.” We don’t really exercise or do sports. We go for walks and just look after each other. Maybe go to the cinema, get some food. We live a pretty boring life.

HEWSON: We live in Dublin, we don’t live in London or L.A., so we’re pretty normal suburban lads.