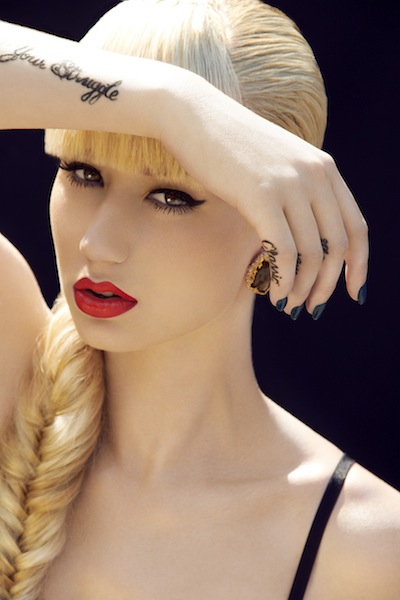 When bombshell MC Iggy Azalea invited listeners to “taste my skittles” in breakout video “Pu$$y”(a track whose chorus is solely the word “p*ssy” on loop), tongues wagged as she swagged out in a pumped-up technicolor suburban ‘hood. An Australian white girl (now L.A. based) with a raw, no-nonsense delivery, a penchant for dirty talk, and a string of stylized, provocative music videos, Azalea whizzed into Internet fame. But the 22 year-old also became cause for criticism: Is she authentic? Swinging her signature blonde-ambition ponytail along the way, Azalea ponytail-whips, rather than pistol-whips (glam, not guns), all her yak-happy haters in their collective face—she won’t crumble. After a much-publicized last-minute decision to not sign with Interscope Records in favor of T.I’s Grand Hustle Records earlier this year, the raunchy rapper is finally ready to share her highly anticipated debut EP Glory.

For a newcomer, it’s been a very public year: she released a free mixtape Ignorant Art last year, was the first female ever selected for XXL’s Freshman class of 2012, has been criticized by Azealia Banks, and is potentially involved in a hush-hush romantic relationship with it-boy rapper A$AP Rocky. All of this piled on top of preparing the several-time delayed Glory EP, a trap-electronic project Trap Gold, and her debut album, The New Classic (likely out early next year.)

Glory lauds the luxury of being fresh, rich, and sexy, spitting out anthems to the blissful sin of living-so-large. “Murda Business,” featuring T.I., is a southern, click-click, bang-bang club beat, where Azalea boasts being “the baddest bitch” in the club. The song comes hand-in-hand with a Toddlers and Tiaras parody-themed video. “Flash” featuring Mike Posner, is an old school hip hop/ R&B jam, in which the fired up MC is sexin’ to Pandora radio. The rapstress shares the mic once again with T.I. and label-mate B.O.B. in “Million Dollar Misfit,” a commercial gangsta ode to being the hottest “anywhere they land”.

Interview spole on the phone with Azalea (real name: Amethyst) about how “Murda Business” could amp up your vocabulary, what nice skin T.I. has, and the underrated wardrobe of The Nanny‘s Fran Fine.

AIMEE O’NEILL: As a teenager growing up in Australia, how did rap speak to you?

IGGY AZALEA: I always thought that there was something in hip-hop culture that was the misfit of all the musical styles, where they didn’t really belong. They’re kind of like, “No, we’re a real culture! We’re not going anywhere, you can’t get rid of us!” I really liked that there was a rebelliousness about it. I connected with that. Also, I liked the flashiness of it and the way everybody dressed—all the crazy chains and crazy style. Everything about it, I was interested.

O’NEILL: Were you a tough girl growing up? Beating up everyone on the block?

O’NEILL: I want to talk to you about “Murda Business.” First of all, I want to say “Stack of hunneds, bunch of fifties” all the daylong; I never want to say “hundred” ever again, strictly “hunned” from now on.  Unfortunately, I rarely have the occasion.

AZALEA: [Laughs.] There’s always room for it in your vocabulary, you should shout it at a meeting. [laughs] It’s so funny because my friends and me always say “Murda Business” now. My friend bought a pair of shoes, she text me a picture, and it said: “Murda Business”. We say it how Tip [T.I.] says it, it’s so funny. We just say it for everything now, like it’s some kind of slogan or something. [Laughs.]

O’NEILL: The video is a Toddlers and Tiaras parody—what sparked the idea for that concept?

AZALEA: Watching it, I thought, Here are these moms and toddlers just taking this so seriously, this is the fiercest of competitions I’ve seen in awhile. They’re so flashy and they want crowns, rhinestones, diamonds, and bright outfits. The flashiness and competitiveness reminds me of rap. A lot of people heard “Murda Business” and thought it was about killing people, trying to be tough and hardcore. If you actually listen to the lyrics, it’s kind of silly and playful. It’s about being in the club, being a bad bitch. You have your outfit and you’re like, “You bitches should’ve stayed at home because I’m killin’ it!”—You’re in the murda business! [Laughs.] I don’t think people understood that. With the video, I wanted to have the juxtaposition and have people think, “Why would she put Toddlers & Tiaras in it, what’s the connection? What’s the song actually about?”

O’NEILL: The lyrics do spell it out for you: In the club, my outfit, murda business.

AZALEA: Yeah, exactly! I never said I’m from the hood and I have a gun. It’s not the message I’m trying to say. Sometimes people take art too literally, like, “How can you have all those toddlers in the video?” Even so, would you not say the word “murder” around your children? It’s not like they’ve never heard the word “murder” before. When we filmed, we played the clean version. If you look closely, you’ll never see us mouth any of the bad words, it’s always a shot of something else.

O’NEILL: Glory is a pretty bold word to title your first EP.

AZALEA: I was in this weird place where it felt like everyone was shitting on me, like, “She didn’t get that deal with Interscope. She got dropped! She won’t get another project!” making it so much worse then any of it really was. I felt like they wanted me to fail and I thought, I’m not going to go anywhere. I’m going to get my glory. I’m going to get my shine. So many people in the industry are like, “You can’t really write records.” It’s to prove to myself that I can write songs. It’s not easy to make a song that the whole world relates to, and to do it over and over again. When I got in the studio I realized this is really, really hard. It’s easy to do whatever the hell you want to do but everybody can’t connect to that. I was just trying to find a different way that I could do it with Glory. I don’t know if it’s successful but I did learn a lot about songwriting while I was doing it.

AZALEA: Yeah. People criticize you for trying new things. I think, “I’m new! I’m 22!” I don’t know exactly what my sound is or what I want my album to sound like so I’m not releasing it yet. While I’m experimenting, I’ll let you in on the journey and you can hear it for free.

O’NEILL: What was your first impression of T.I.? The first thing you noticed?

AZALEA: “What kind of face cream do you use? Because you have very good skin.”

O’NEILL: Did you ask him about his skincare regimen?

AZALEA: No, but I said it to my friend in the car. And she said, “I thought the same thing!” [Laughs.] At the time, I felt like I was just floating around in a big ocean. I got picked up and caught by a label [Interscope], and it was very impersonal. It felt like I was a product. When I met him and everybody else over at [Grand Hustle], it felt like I was with real people again. He cared about me as a friend, not just as a check. I want to know that when I make mistakes, I have a label and a family who won’t desert me. I think a lot of people looked at it like, “Why would you do that? It’s Interscope! It’s a giant!” but you also have to be happy in the place that you work. I was in a bunch of studios that cost way too much money and I was getting served warm cookies when I walked in the door. It was too far out of my comfort zone.

O’NEILL: When you hear or read negative comments, or you find yourself in a “beef” with another artist, does it fuel you to go harder?

AZALEA: You know, sometimes I have to catch myself. There are always days where you think, I’m going to show them. It’s like what T.I. always says, ” You can’t let others be motivation to do stuff. You can’t just go because everybody else is going. There’s a time that’s right for you.” When I look at other artists who came up at the same time as me, sometimes I wonder why I’m not [getting the same opportunities]. Everybody’s time doesn’t always occur at the same speed. I try to be more relaxed about it, and go when I feel like it’s the right time to go. It’s not a race.

O’NEILL:  Your latest single “Flash” with Mike Posner is a straight-up sex jam. The press often focuses on and sometimes criticizes your sexually explicit lyrics—what’s your take on that?

AZALEA: I think its funny when people say a female rapper is too sexually charged, maybe the way we do it is a little more in your face but that’s because we have to be aggressive and masculine to make it in the industry. If I talk about sex blatantly, when [the mainstream media] says it metaphorically every day, it’s not okay? It’s hypocritical. To me, Britney Spears in a nude rhinestone bodysuit rolling around is just as sexual as me saying “pussy, pussy, pussy” sitting on a doorstep. If I dressed in a bedazzled bodysuit and sung basically the same message but sugared it up a bit, I’m sure people would let their kids watch it, and there would be toddlers in tiaras dressed up in it in the talent competition on TV.

O’NEILL: Your looks are often discussed, as well. Do you think they ever overshadow your music?

AZALEA: Yeah, I do. I guess it’s my fault. I guess I should make better music so it doesn’t overshadow it. [Laughs.]

O’NEILL: [Laughs] I hope you don’t think that’s what I was implying.

AZALEA: No, but that’s what I think. Shit. Maybe that’s what’s more interesting to people, maybe I should work on that. [Laughs.]

O’NEILL: Speaking of appearance, I read that Fran Drescher in The Nanny influences your style. Growing up I always thought she was such a beautiful, stylish lady. I was pleased to find I was not alone in this. [Laughsl]

AZALEA: [laughs] Me too! I feel like she gets so overlooked! I didn’t have cable television growing up; there were only six channels you could watch then. The only really good channel was channel 10, and they would play The Nanny Called Fran every night for years. I’ve seen every episode 100 times. I would get my Grandma to make me leopard skin dresses on her sewing machine. I would go with her to the fabric store, pick out the patterns out of the little bins, pick out the leopard skin fabric, and be like “Please, can you make me this?” [laughs] She would and I’d wear it around the house.

O’NEILL:  I dressed as Fran for Halloween one time, sequins and big hair. I also got to live out my Nanny dream.

AZALEA: Oh my god! I don’t know why I’ve never done that for Halloween! I need to get somebody to make me a burgundy two-piece suit with a leopard skin fur collar and cuffs. I’m going to have this Halloween costume and probably will end up wearing it in one of my videos. [laughs]

IGGY AZALEA’S GLORY EP IS OUT TODAY, JULY 30. FOR MORE ON THE MC, VISIT HER FACEBOOK.