For as long as she can remember, Olivia Rodrigo star of the Disney Channel comedies Bizaardvark and High School Musical: The Musical: The Series, had plans to branch out on her own. She just didn’t expect it to happen before her 18th birthday with one of the most dominant number-one hits in music history. Since its release earlier this year, the California native’s “Drivers License” became the most streamed song on Spotify in a single week, and, spent eight consecutive weeks atop the Billboard 100. Now, a week after the release of her highly-anticipated follow-up single “Deja Vu,” she spoke to us about the strange experience of watching something she made in her living room take over the entire world.

BEN BARNA: Who was the first person to hear “Drivers License” and what was their reaction?

OLIVIA RODRIGO: I made it with Dan Nigro, who is one of my favorite people to make music with. We kind of messed around with the production for three days or so. The first people we sent it to were my manager and our guys at Interscope. I’d never sent them a song and had them respond so positively. They’re very constructive and they’re never like, “This is incredible, stop now.” But that was the first song where they’re like, “It doesn’t need anything. Let’s submit it now. This is incredible.” I remember my A&R, Matt Morris, who signed me, was in the desert at the time. And he said that the second that the bridge hit, he pulled up to a red light in the middle of the desert and got full body chills because of where he was and how beautiful the bridge was.

BARNA: Was there a specific moment that you can point to where you realized that something special was happening?

RODRIGO: It was really strange because, obviously, we’re in quarantine. I’m not seeing anyone, I’m not going out. And so I was just in my house refreshing the Spotify page over and over. It just kind of came out of the gate running. It was one thing to see all the numbers and the charts, but I think the moment that I knew really early on that maybe this was going to be something big was when it was next to Taylor Swift on the iTunes charts. It was her two bonus tracks off of Evermore, and then “Drivers License.” And I am the hugest Taylor Swift fan ever. I posted that on Instagram and she actually commented on the picture, which was super cool. That was really the moment where I was like, “Whoa, this is something big.”

BARNA: It used to be that musicians weren’t able to see how many people were listening to their music in real time. What’s your relationship to the numbers?

RODRIGO: It’s a perk of the 21st century. I looked at them a lot, maybe the first week, just in total disbelief. I don’t really look at them anymore just because I cannot wrap my head around numbers like that. It’s really strange to put out music in quarantine, because I’ve actually never played a show with my own music. I’ve never met the people that are listening to the songs. So it’s just solely on social media and stuff, and sometimes that can be a weird world that feels disconnected from reality. But I hear stories. One of my friends said that yesterday she was on Melrose Avenue in L.A. and three cars pulled up next to each other and they were all blasting “Drivers License” at the same time and they just all turned it up and sang it at the same time. It’s stories like that where it’s real people listening to it that absolutely astonishes me.

BARNA: Do you fantasize about an alternate reality where “Drivers License” came out during a normal time?

RODRIGO: That’s a great question. I’ve never played a show with my own music in my life, so I’m really excited to do that one of these days. But if I could go back, I don’t think I’d change a thing. Honestly, quarantine probably contributed to its success. Lots of people are stuck in their houses, and, obviously, it’s been a hard, depressing, anxious time for all of us. I think this song is a sort of catharsis for a lot of people.

BARNA: How many hours have you spent on “Drivers License” TikTok videos?

RODRIGO: If I’m being completely honest, I really have not been on TikTok a ton since the song came out. It’s been such a whirlwind. If I went on TikTok, I would literally be on there for five hours and I’d get nothing done. So I can’t. But all of my friends send me the funniest TikToks. People are just so talented. I think the biggest honor as a songwriter is having a song that you wrote be interpreted by different people and have them write their versions of it. That’s so flattering. 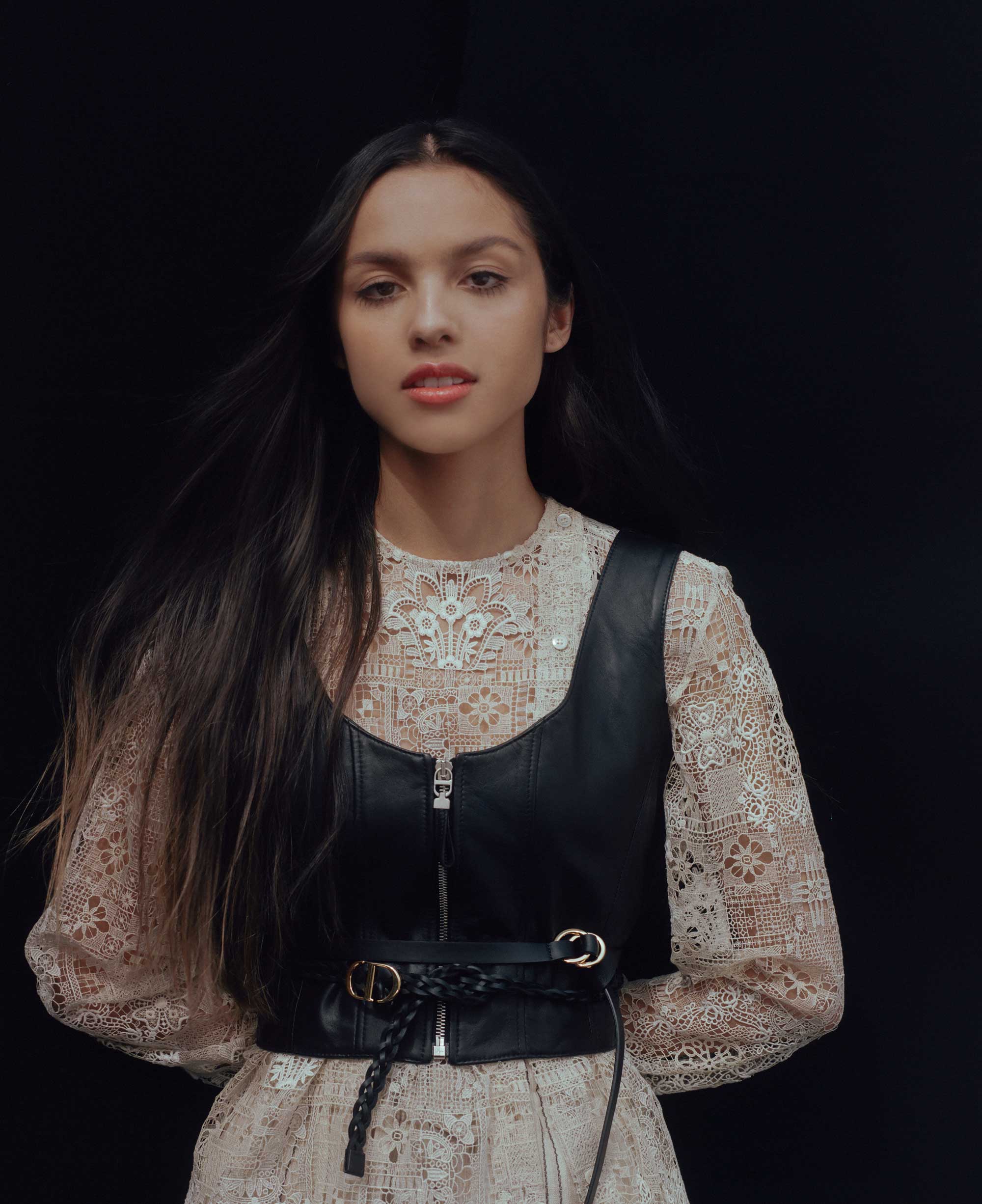 BARNA: I imagine you’re going to be singing “Drivers License” next year and the year after that, and you might not be feeling the emotions that you had when you wrote the song, but you’re going to have to go back into that headspace. Is there a correlation for you between singing and acting in terms of having to sort of channel a certain headspace that you might not actually be in at time?

RODRIGO: There’s definitely a connection. I’m just obsessed with emotions. I’m the most sensitive bitch in the whole world. That’s what’s always drawn me to songwriting and singing and acting, is just how emotional you get to be and then be praised for that. I’ve been recording this past week, tracking vocals and stuff, and sometimes, if I’m stuck in a rut, my producer will literally film me doing it. And for some reason the take will be so much better because I know the camera’s on, and I’m acting, singing the song.

BARNA: Besides “Drivers License,” you’re known for your work with Disney. In terms of transitioning out of the Disney machine and becoming a musician in your own right, was that something that was always the goal for you? And did you have a timeline in mind of when you wanted to introduce yourself as a musician?

RODRIGO: Yes, everything is happening so, so, so much sooner than I could have expected. I didn’t have any expectations for “Drivers License,” but even if I did have them, I think what actually happened would have just exceeded any of my wildest dreams. It’s been something I’ve given a lot of thought to, that Disney-girl archetype. I feel like there’s such a clear trajectory for what that is, and there’s so many amazing artists who have done it before me. I have just always been a big songwriter. And my biggest thing was, “I just want to be taken seriously as a songwriter and as an artist.” You could do interviews forever about how you want to be taken seriously, but for me, the real thing was, “Let’s just let the music speak for itself.” I think people can sense that I’m not trying to like somebody that I’m not. I did grow up on Disney Channel. I am sort of this goody two shoes. And I think shying away from that would do my art an injustice, too. I just try to be as real as I possibly can.

BARNA: What has it been like attracting this new, more adult fanbase?

RODRIGO: I feel really seen by the public for some reason. For so long, I was playing a character, and people would come up to me and be like, “I love this character that you play and the show that you’re a part of.” And That’s amazing, but recently people have started coming up to me and being like, “I really love your song. It helped me get through a really hard time.” That’s just such a big honor. I feel like they can see me for who I really am, not this character that I’m playing or this script that I’m reading. And yeah, like you said, it’s being received really well by adults, too, which is crazy. When it first came out, my therapist called me and she was like, “Girl, I’ve been married for 10 years, I’m 40, but this song makes me cry.”

BARNA: You’re only 18 years old and you obviously have room to grow as an artist. Do you know which areas you need to improve in?

RODRIGO: I feel like I’m constantly growing. I’ll be a developing artist until I’m 85. I think the best songwriters are like that. I always listen to my songs and try to think of ways I can strengthen them. But yeah, I just turned 18. I truly don’t really know who I totally am yet. I don’t know the way I like to dress. I don’t know the way I like to act around certain people. I don’t know what my purpose is. I don’t know what people are my true friends. I’m just going to keep on making music and I’m probably going to be really confused along the way, and I think that’s the beauty of it. I’m trying not to pretend like I have everything figured out because I sure as hell don’t. 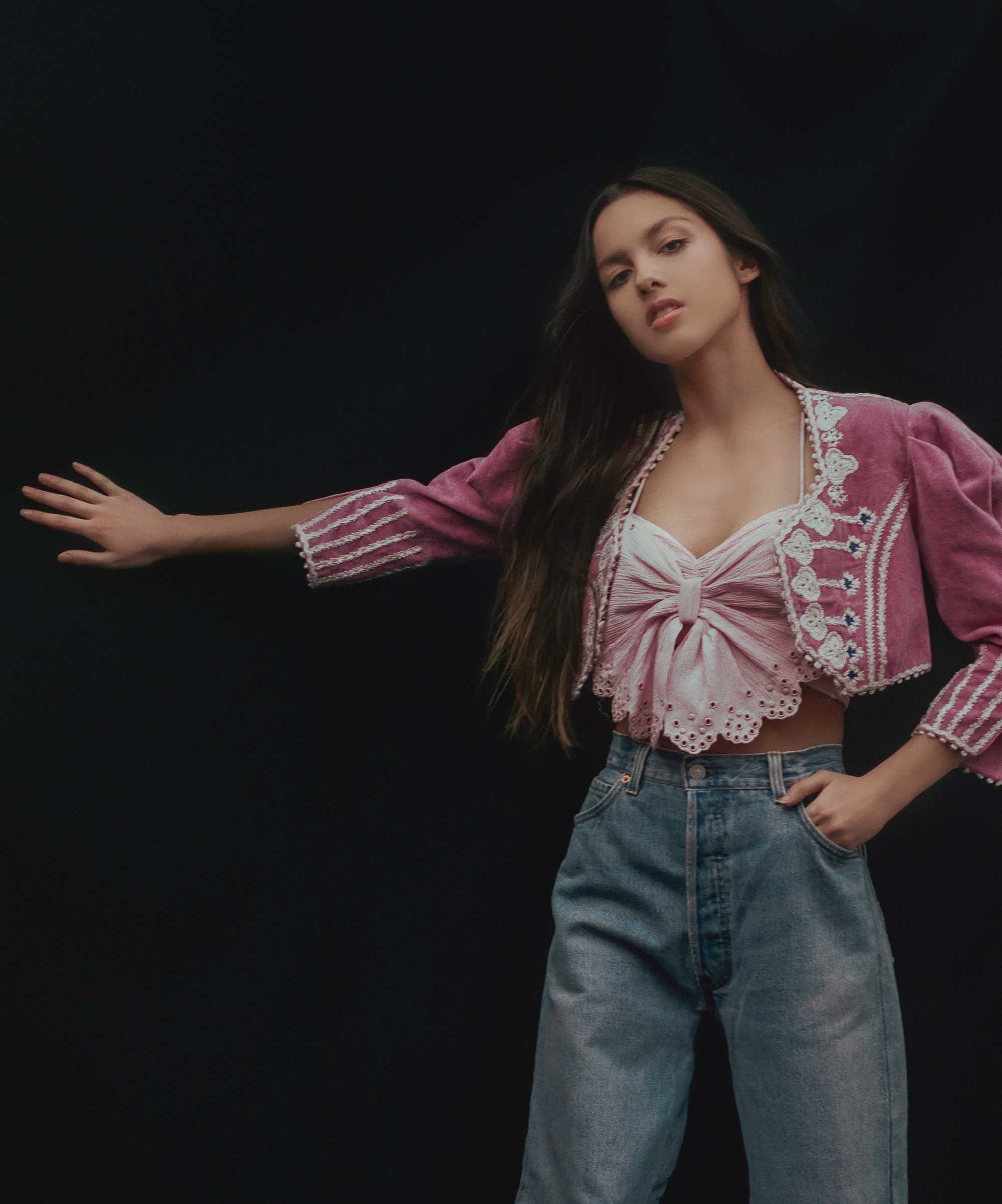 Jacket, Top and Shoes by ISABEL MARANT. Jeans by RE/DONE.