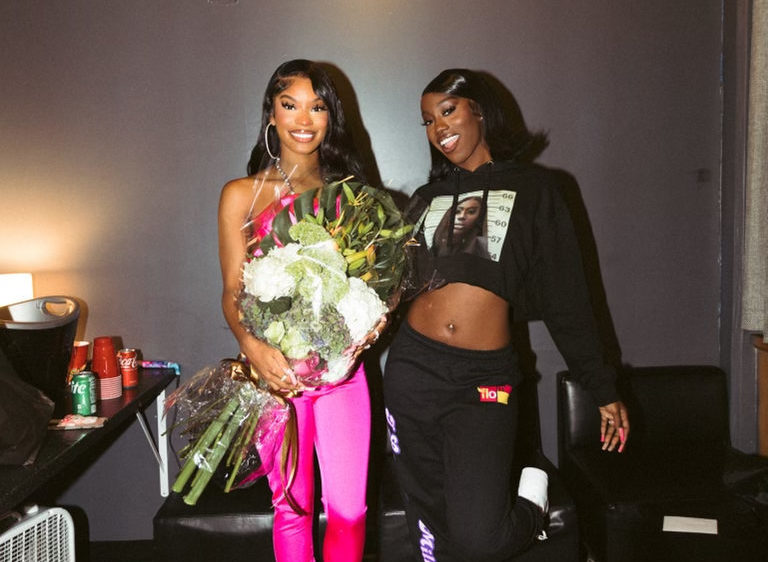 Flo Milli joins us from her dressing room at the hallowed Roxy Theatre in Los Angeles, the ends of her hair curled into the immaculate 1960s-inspired bubble flip that’s become the 22-year-old rapper’s signature. A few green rooms down is Flo’s opener Monaleo, appearing on Zoom as her makeup artist takes to her cheeks with an assortment of brushes and wands. It’s the last night of the “Girls Just Wanna Have Fun” tour, the pair’s month-long, 17-city jaunt across the country; they’ve certainly had fun, and emotions are running high. For Flo Milli, whose brash and idiosyncratic mixtape Ho, Why Is You Here? dropped in the pandemic summer of 2020, followed this year by its spiritual sequel You Still Here, Ho?, the tour was her first opportunity to prove herself as the bonafide headliner and ferocious stage presence she is. On the road, Flo was joined by the 21-year-old, Houston-born rapper she affectionately calls “Leo,” who broke out last year with the viral hit “Beating Down Yo Block.” Earlier this year, foreshadowing their eventual link-up, Leo enlisted Flo to join her on a remix her single “We Not Humping,” a funky and cocksure anthem in which the two rappers go bar for bar, chewing out a man they refer to, rather devastatingly, as “Mr. I Need A Break After The First Fuckin’ Round.” But Flo and Leo, the pacemakers for an enterprising, do-it-yourself wave of Gen-Z emcees, have one more night to give. So, moments before they took the Roxy stage, they joined us to document a tiring but ultimately instructive month on tour, revealing the lessons learned—and calories burned—along the way.

JAKE NEVINS: Hi, guys! So, it’s the last night of the “Girls Just Wanna Have Fun” tour. How are you feeling?

MONALEO: It’s a little bittersweet. I’m anxious and nervous, because it’s here in LA, and the only time I’ve ever had a show here was for Rolling Loud, which wasn’t the best experience. Not because of Rolling Loud, but because I was a new artist—well, I’m still a new artist. But I was an even newer artist at the time. And for Rolling Loud, there’s so many people in the lineup, you don’t know who came to see you, if anybody at all. So I’m super nervous about this being the last show. But at the same time, it is very bittersweet. I’ve had a really beautiful experience on this tour, being able to meet people who actually support me and love me and know the lyrics to my songs. That’s insane. So I’m definitely gonna miss this experience. It was a confidence booster, one of those things that kind of reassures you you’re doing the right thing and you’re on the right path.

FLO MILLI: It’s so crazy you ask that because I was literally just typing a caption for my next Instagram post saying how bittersweet it is. But like, I was so happy to be on tour, especially with Leo and the other girls. I really enjoyed it. I learned a lot. And I felt like we were able to connect with our fans on a more personal level, versus just going to festivals. I feel like we got to really connect with our true, true supporters. So it was a dope experience.

MONALEO: I also also have really, really, really terrible social anxiety that I’m still working to get over. But literally, before every show, I just have this boost of epinephrine. Like, this crazy adrenaline rush that just overstimulates me and I just be feeling so crazy.

FLO MILLI: I definitely feel the adrenaline rush Leo’s talking about. I feel that almost every night before I go on stage.

MONALEO: Flo is crazy right before she goes on stage. Like, you’ll be having a full blown conversation with her, and then her pre-show fucking routine is fucking nuts. She just has her little earpiece in and she’s just like, standing off in the corner screaming like no one can hear her. She’s like, “Come outside ho! Come outside!” I always know when she’s getting ready to go on. She’s a monster. I really love to see her like, in her zone. She’s really focused and nothing or nobody can deter her when she’s locked in. I love that about her.

NEVINS: Flo, can you corroborate?

FLO MILLI: She’s not lying. I really will be in a corner like that. I don’t realize how loud I am though because the earphones be in my ear. But yeah, I definitely got to get in my zone. But I really love her routine as well, how she’s always so calm. I wish I was that composed before I get on stage. It’s so dope to be able to experience this with her. And it’s actually a genuine friendship. I feel like we’ve been learning from each other too, even just paying attention to how she interacts with the crowd.

NEVINS: For both of you, a tour of this length and size is a relatively new experience, heading off to a new city each morning. How are you holding up?

MONALEO: Eh, I don’t like the mornings. I would love to be a morning person because I feel really productive in the mornings. But the truth of the matter is I like to sleep in.

NEVINS: Do you stop for breakfast, at least?

MONALEO: Sometimes breakfast is like, Dunkin’ Donuts or something random. I noticed a lot of these places don’t even have kolaches. I’m sure you probably don’t even know what that is because I just realized that’s not a thing up north. But a kolache is basically like a sausage, and there’s cheese wrapped around the sausage, and then there’s bread wrapped around the cheese. And it’s so good. You know what that is?

MONALEO: It’s kind of like a pig in a blanket.

NEVINS: That I know.

MONALEO: It’s like a bigger version of a pig in a blanket. A lot of towns don’t have it and that shit kind of threw me for a loop because that’s one of my favorite breakfast foods.

FLO MILLI: Most of the time we leave one city at like 2am, so by that time everything’s closed. Sometimes we’ll stop at gas stations and I’ll be getting all the snacks, all the snacks.

FLO MILLI: I love rock candy. You know, the little sticks with the rocks. I always eat those, or sour Skittles, or Rice Krispie Treats. I really need to stop. Honestly, I kind of did bad on tour because I was eating a lot of junk food but I’m gonna get back to my natural, nutritious ways.

NEVINS: Well, you’re probably working it all off on stage each night anyway.

FLO MILLI: Every time we get on stage, I know we be burning calories. Because we be sweating.

MONALEO: No girl, you be sweating! Flo be burning calories. I’m very mild on stage because I’m very shy. I am not very savvy on my feet. I’m just very fucking clumsy and I just imagine myself falling and tripping and embarrassing myself, so I try not to get too crazy. But Flo be on stage turnt as hell. And I’ll be thinking I’m giving it and I watch the videos back like, “I wasn’t giving nothing!”

MONALEO: She’s out there with full choreography, her dancers with her. It’s crazy. It’s nuts. She really dances her ass off. I definitely learned a lot of performance tips from her.

FLO MILLI: She’s not lying, though. But I’m clumsy too. I actually just fell at the other show. I don’t know if you saw that, Leo, ’cause you had to take the stairs to get there. But when we played “We Not Humping,” I fell right on that speaker. They got my ass.

MONALEO: Did they see you?

FLO MILLI: Yeah, one of my fans caught me…

FLO MILLI: It was crazy. But yeah, you compose yourself.

MONALEO: No girl, I’m not right by that. I just be scared and reserved, but I just like how you go for it and I told myself, “Next time around, I’m going for it.”

FLO MILLI: It’s gonna happen. I see it in your performance. Last night you went crazy. You could feel they was loving the energy from us. I know the more shows you do, it’s gonna come naturally. You’re gonna be realizing like, “Damn, when did I get so good?”

MONALEO: I can’t wait for that.

NEVINS: What’s been the best crowd so far?

FLO MILLI: New York was lit. Leo, what you think?

MONALEO: New York was lit as hell. But I would say Atlanta. The second show in Atlanta was probably the best because I think that’s more our demographic and like, our down-south family. And then a close second is New York, for sure.

FLO MILLI: Top three would definitely be Atlanta. Atlanta went nuts. Definitely New York. I will say Detroit, too. But the one yesterday, I really loved that one. That energy was crazy.

NEVINS: When you get to a new city, is there any time to venture out?

MONALEO: I don’t like to do too much exploring. My whole team will go out and run the town though.

FLO MILLI: I snuck out when we went to Boston. But it was because everybody else had left and I was the only one there. I went to the bookstore. I had a cute little day. But most of the time I leave it up to my hairstylist to find the food places. She’s always finding all the good food. I’ve been eating pretty much everything.

NEVINS: Are you on the hunt for classic foods in the cities you’re visiting, or just satisfying cravings?

MONALEO: I’m trying to get the classics. I feel like we do a good job at least trying to get the specialty of whatever the town is most known for. But when we were in Toronto [laughs]—anyway, I just couldn’t find something I liked. Everything tasted so different so I just ended up going to KFC. And even KFC was different!

FLO MILLI: That’s the only thing. When we’re in an awkward place where they don’t really cook what we normally eat, I just be like “Take me to McDonald’s.” Give me McDonald’s fries and I’m good. That’s probably ratchet but I gotta be honest.

NEVINS: Leo, I see you’re in pre-show glam. What’s that process like? What’s in your rider?

FLO MILLI: Well, I should start vocally warming up, but I don’t really do that. But I definitely drink tea. That helps me a lot.

NEVINS: How do you take your tea?

MONALEO: You be making tea, like, in your hotel room?

FLO MILLI: The hotel be making it! For real. Or we’ll go to the gas station. We’ll get it from anywhere.

NEVINS: Well, I’ll let you guys get in the zone. Break a leg.

NEVINS: Oh, god. Flo, did you lose a bet or something?

FLO MILLI: Well, kinda. Not really. But Leo thinks I should do a split so I’m gonna try it. But if I end up on The Shade Room…

MONALEO: Imma be in the comments arguing with people for you.

NEVINS: I’m sure you’ll nail it. But if you don’t, I know some drag queens who can help with the death drops.

FLO MILLI: Oh, yeah? Send them our way so we can learn a couple of things.