Fearless After Death in Vegas 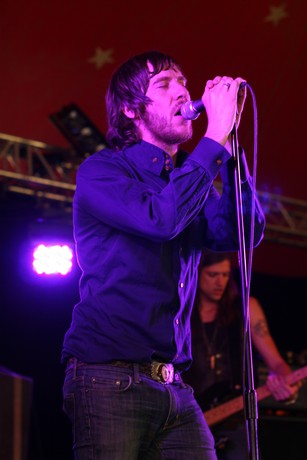 He’s worked as a director and a producer and even designed as forthcoming winter clothing collection for French fashion collaborative/record label April 77, but chances are you know Richard Fearless as the knob-twiddling prodigy behind Death In Vegas. For more than a decade his psych rock-meets-electronica venture pushed the boundaries of techno, krautrock, and dub with dark tracks that featured haunting vocals from the likes of Iggy Pop and Oasis’ Liam Gallagher.

But after parting ways with DiV collaborator Tim Holmes in 2004, Fearless picked up a guitar for the first time in his life and began writing lyrics, for what would eventually become his new band, Black Acid. Hot off a mind-warping opening set for Perry Farrell at SXSW, Fearless just put the finishing touches on their new album, Trans-Love Energies. Built around a pair of guitars—classic rock and noise—and his deeply personal vocals about some recent loves and losses the new sound conjures what might be like to hear the Stooges rock a Detroit rave with a little Southern Rock thrown in for good measure. Though the album won’t be out until fall, April 77 just released a special 7-inch record with two new singles. We caught up with Fearless on “the other side of an ice bong,” no less, to talk about the new sound, his love of fashion, and a forthcoming Death In Vegas album that’s currently in the deep freeze.

RICHARD FEARLESS: I’ve been here for about the last five years. I moved here to go back to college actually. I was studying photography again at the International Center of Photography. And then while I was here I started my new band.

MS: When did you start taking photography classes?

RF: I used to direct most of the Death In Vegas videos and I’ve always been into film and photography so it’s something I’ve always been doing. After years of doing Death in Vegas videos and all the music and the artwork I decided to take a break, and I moved to America. It was never a real break from music because I picked up a guitar for the first time and started writing.

MS: Have you worked on any film projects recently?

RF: Yeah, a few things all over the place really. The last big thing I did was Sympathy For The Devil for The Rolling Stones for that last tour. It was this satanic eight-minute film I did. They came on to it. So that was cool. And then I’ve done some videos: I’ve been working on this documentary called Wiz, which is based in India and kind of ongoing. At the moment though I’ve been doing a lot of stuff based around Black Acid, just keep documenting it all. I’m not sure what’s going to come of it.

MS: So how did you get the band started?

RF: Originally what happened is that the original guitarist was the lead singer from A Place To Bury Strangers. They’re a really cool New York noise band. The guitarist has this company called Death By Audio and he makes these amazing guitar pedals. But I saw him playing, and it was this kind of fast Kevin Shields sound and I remember thinking if you played with a kind of Ron Asheton, straight rock n roll guitarist it would be a really good pairing. So I had some demos, he listened to that and came on board, and then Chris [Karloff], from Kasabian, he came over and started playing rock n roll guitar with this noise guitarist. And I kind of built the band around that sound.

MS: So what’s the sound you’re going for? It seems a lot different than Death In Vegas.

RF: The album is similar to Death In Vegas in that it’s all over the place. But it’s got a broken beauty. It’s a love album. It’s very repetitive, and what I bring to my production which is all the Kraut Rock influences and stuff.

MS: It almost has a Southern rock sound to it.

RF: Travis, one of the guitar players, is from Virginia, and there are a couple other people from the South that are in the band. It sounds to me like Black Acid now, which is good, and “Savage Love” is the song where I feel like I nailed the sound, which I’ve been hearing in my head. These type of Beach Boys harmonies with uncut stuff that’s just slightly off.

MS: What made you want to get behind a mic?

RF: I was having a little bit of a tough time and I felt the way to deal with it was to write about it and to try and write songs. As corny as this sounds it was a therapy of life to get things out of my head. My partner had cancer and we were having a tough time and everything else was uncomfortable from that. So I wrote the songs and singing them with the intention of getting someone else out there… after a while it became so personal that I couldn’t get someone else to sing what I’ve gone through. I’d rather sing it badly and at least believe what the person was singing then try to have someone else believe those words. I think that’s probably the reason. It’s something I didn’t want to do and something I dreaded honestly.

MS: Did you approach song-writing the same way otherwise?

RF: It was a big learning curve because I always wrote songs electronically with Death In Vegas; then I’d bring in a band to play around this electronic piece, then draw the piece out and play around the shells. I’ve never picked up a guitar and tried to write a song, so it’s a big learning curve. But I’m really pleased with it all and the band is starting to take shape.

MS: Are you bringing anyone into the studio this time like you did with Liam and Death In Vegas?

RF: No. You know I just got really into doing it. It’s nice doing the vocals. I suppose selfishly once you’ve written it and you’re producing, I can get the sound I’m trying to get. When I work with other people I always feel like I’m compromising what I want to do to a certain extent.

RF: When you work with someone it’s their take and you know they’re bringing their own thing to it. I definitely regret working with some people—doing things because maybe it just looked good on paper. Maybe I just smoked way too much weed.

MS: Well tell me about this April 77 collaboration you’re doing?

RF: I was doing some design work for them and helping them out on a collection of things like the Acid Drop, which is a Navajo Indian poncho for dropping acid. It was crazy clothes. It’s coming out next winter. But that was the start of it; in became a loose consultation and they want to release the records and we might be doing a video for them under this other company I have that does design work, called The Stones. There’s three of us and we do consultation design for other brands.

MS: So you’re into fashion?

RF: That’s my background. I did my degree in textiles at this place called Camberwell in London. My mom’s a textile designer, my aunt used to work for Ossie Clark, my sister is a shoe designer, and my dad is a cartographer. Over the years, I’ve always exhibited and done designs for various different companies. You know when it’s all a bit all over the place.

MS: And you produced this record as well.

RF: Im been working on a ton of things lately from like the Horrors, to Kasabian, to Oasis. I’ve done all my work for the last couple of years at this studio in Michigan at this place called the Key Club and they have Sly Stone’s old console up there and it’s got this great dead, woody, 70s kind of sound.

MS: Do you ever think about doing more with Death In Vegas?

RF: It’s just me now. I stopped working with Tim, my old engineer and partner, although on paper it’s always been just me. But there’s a record recorded. We got asked to score these three psychedelic surf films at Barberton, a big art center in London with this big room that fits 2500 people and a huge screen. We performed a live 90-minute score over these three surf films. Then we recorded it two days later. So that’s the next record, but I still have to mix it. I know it’s going to be a two-year job and I’ve just got other things that appeal to me more right now.