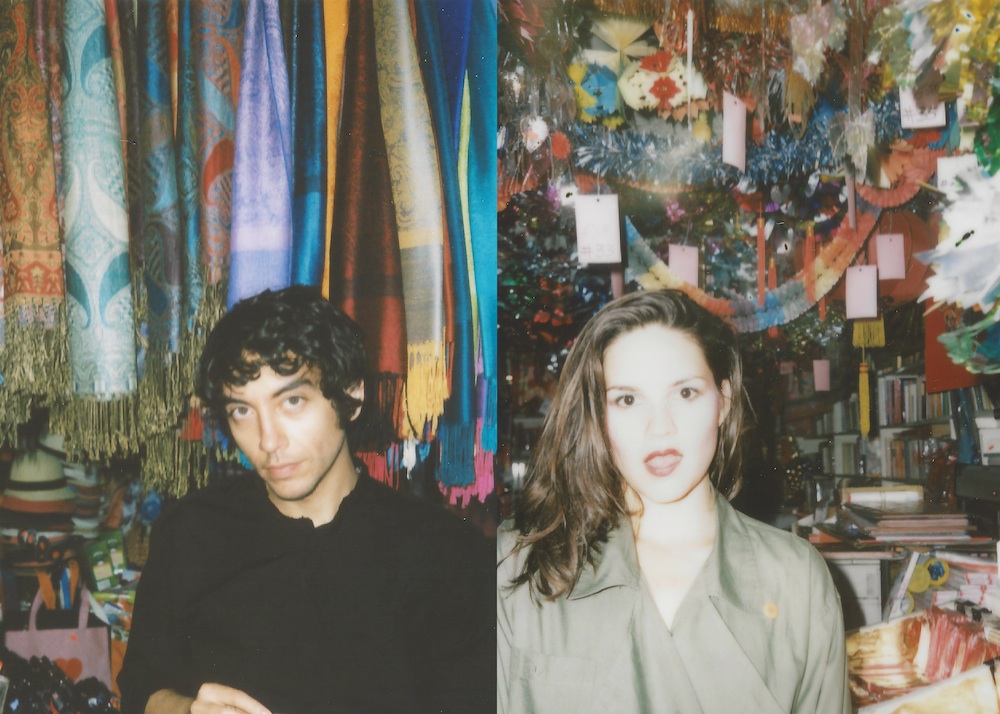 On the streets of Puerto Rico, buscabulla is slang for troublemaker. The two people behind the Brooklyn-based band Buscabulla, however, are rabble-rousers in name only. Together, girlfriend-boyfriend team Raquel Berrios and Luis Alfredo Del Valle make music that is 100% appealing: slinky, sexy, Spanish-language. They’ve been perfecting their signature sound—an irresistible, retro-tinged mix of psych, soul, Caribbean music and everything in between—for about three years.

The band won a contest to have their new EP produced by the artist also known as Blood Orange. Self-titled and out on Kitsuné, Buscabulla is the fateful combination of Dev Hynes’s deft touch and the band’s already developed, super-silky sound.

We talked to singer (and new mom) Raquel Berrios about singing in Spanish, Dev Hynes’s help, and flipping the script on the lewd lyrics of reggaeton.

WHAT’S IN A NAME: Buscabulla is a slang word in Puerto Rico. I guess I’ve always been kind of attracted to slang words or the words that people in the street use. It kind of has a bad tone to it, but if you break the word apart – busca means ‘to look for’ and bulla means “cheer” or “upheaval.” I think it’s kind of like the band The Upsetters in Jamaica, where it could be either a good thing or a bad thing, so I kind of liked that. I liked the fact that it ended in an “a,” which in Spanish is a feminine word.

SONIC DESCRIPTORS: People have put it in so many ways, I like to think of it more as a new generation of Caribbean —Caribbean music that is at the same time worldly. But then there’s dashes of psych, there’s dashes of soul, there’s dashes of electronic music. Some people say electro-psych, but then I don’t think that we’re totally electro, because we use a lot of live bass and stuff like that. We do sample, but it’s kind of a hybrid. So somewhere in between. It’s so hard to categorize it. Maybe let’s just call it “Caribbean music of the future.”

SINGING IN SPANISH: I always think, if I sing in English, first of all what am I really contributing to the landscape? This is what’s real to me, [Spanish] is my first language. There’s always that doubt—if you sing in Spanish are you limiting your audience? Well, I don’t know. At the end of the day I think it actually makes it more exotic or it just makes it different. I think that other bands that have come before have paved the way to make music that’s still beautiful and still in their native language.

ENGLISH-SPEAKING AUDIENCES: I think sonically it’s rich enough that I don’t think people are mad at me because they don’t understand what I’m saying. When people like it and they’re not understanding the words, that’s proof that it’s getting to them. That’s dope.

SONGWRITING STYLE: I like to take these male Latin genres—Latin culture is known to be very male and chauvinistic—and I like to turn it around and put it in a new context. Aside from that, I think my songs are about spirituality in a way, and in a really light way. They’re not necessarily singer-songwriter type of things, they just talk about concepts in general that are a little bit loose. None of them are love songs. They’re more songs about the self or the culture where I come from. I think it’s kind of an exploration of that.

SEX APPEAL: Maybe I’m saying something in a sexy way but then I’m talking about something that can be deep, or maybe that people wouldn’t expect to be sung in a sexy way. “Métele” is kind of a love song, but the words are really lewd, because they come from reggaeton and I’m twisting that around in that song.

THE CONTEST: Guitar Center and Converse did this contest that I did not want to participate in. I guess I was kind of telling my boyfriend “I don’t know, this is in Spanish, it’s kind of experimental,” but yet it had the Dev Hynes name behind it. I’m a pessimist. Luis said “just see what happens.” And boom, Dev loved it. He had a lot of appreciation for what we were doing. I think he sensed there was something exotic in what we were doing and he thought that our songwriting was solid, our sound was solid. That’s how it all happened.

THE BUZZ: At the end of the day, Luis and I have our day jobs, we have our baby. Music is kind of like this virtual reality sort of thing for us—almost as if it’s not really happening. We’re mostly at home. There’s something about it that just seems a little bit surreal.

DEV HYNES: He’s a super cool guy. He plays guitars on most tracks. He was great at decision-making. Basically, we brought everything in demo form and he just helped out a lot in decision-making, what to subtract and what to put in. Also sometimes we’d work a song and he would go back to his apartment and work on it and then we would listen to it the next day, so it was really collaborative. A producer can have many different ways of working with a band. Sometimes you say “this was produced by this person” and people think that like that producer produced all of the music, and then maybe “Oh, it’s just my voice on it.” But no, it was very collaborative. Dev is a savvy guy, he knows stuff, he knows his songwriting. He’s just an über-talented, cool dude.

BIRTHING AT HOME: It was pretty amazing and it was actually really chill. It was a really beautiful, cool experience. The best part was I had her in the bed and that’s where I stayed for two weeks straight afterward. I didn’t have to move afterwards. [laughs] She’s dope. It’s the year of two babies—our EP and our baby girl. It’s been pretty cool.

BUSCABULLA’S EP IS OUT TODAY, OCTOBER 7. FOR MORE ON BUSCABULLA, VISIT THE BAND’S WEBSITE.