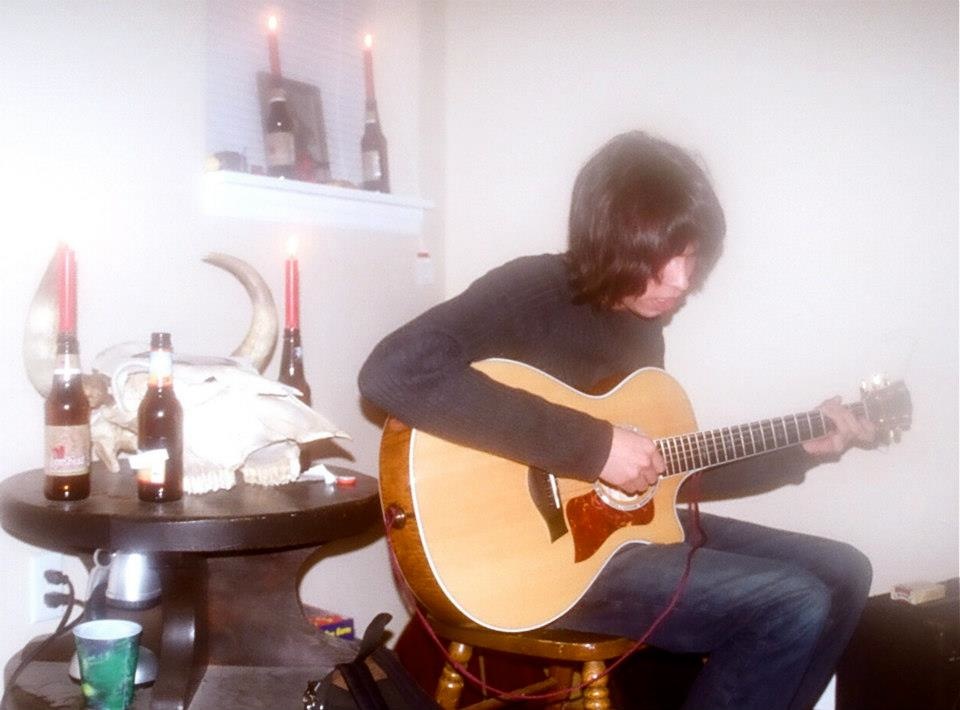 Alex Giannascoli is, for all intents and purposes, just a college student. When we call up the 20-year-old Temple University polymath, he details his plans for the evening; they include “doing some homework and shit” and “hanging out at his girlfriend’s place.” It’s a simple life, the normalcy of which might belie the uniqueness of his recent solo recordings. Though he’s been writing songs as long as he can remember, as he will go on to explain over the course of our brief conversation, the last several years have seen a burst of productivity under his own name (or a shortened version of it: Alex G) that’s rare for a kid of 16, 18, 20. His tracks bear the marks of the early works of his avowed influences: of Isaac Brock’s teenaged explorations at the beginning of Modest Mouse, of J Mascis’s and Lou Barlow’s hooky sludge pop ditties at the beginning of Dinosaur Jr.’s decades-long run, and of Doug Martsch’s sidewinding indie pop that marked the majority of Built To Spill’s earliest releases.

Even though those touchstones all hail from a specific moment, don’t let Giannascoli’s music fall into that dreaded category in your brain where you store away all of those bands that are trying to rehash the ’90s. His similarities to those figures are in ideology, rather than sound. Giannascoli’s tunes, particularly on his most recent release (a 7″ split with similarly minded Los Angeles resident Rachel Levy, who records as R.L. Kelly) warp and wander in unpredictable ways, making memorable and fresh sounding pop songs out of naught more than the tried and true guitar-bass-drums-vocals method. And listening to him talk, you get the sense that he’d never make those sort himself. Instead, he chuckles at the absurdity of his most self-serious and introspective moments. Read on for tales of his formative years.

FAMILY MATTERS: None of my family members are particularly musical except for my older brother. He has Asperger’s and perfect pitch. He’s really good at music. It’s detrimental to his social abilities, but he’s a musical genius. He was always playing piano, as long as I can remember. It made me want to start playing the piano. He’s 11 years older than me, so when I was born, he was already really fucking good. My sister had really good taste in music too. She’s nine years older than me. She introduced me to really good shit like Modest Mouse and Radiohead when I was really young. I think that shaped my musical taste a lot. She was really involved in listening to music and my brother was really in playing music.

THE EARLY DAYS: I remember writing really simple songs on the piano when I was really young. Looking back, I’d play a lot of two-note minor chords and call it the “bad guy” song and then a bunch of major chords would be the “good guy” song. [laughs] As far back as I can remember, I was trying to make my own songs. In maybe third grade, I kept asking my parents for piano lessons, and eventually I got them. It turned out I wasn’t quite disciplined enough for piano lessons. [laughs] They paid for the lessons, but I never really practiced or anything, I just wanted to do what I wanted.

YOUTHFUL HUBRIS: I’ve always been super-overconfident in my music. My family got a Mac computer when I was in sixth grade. I was making techno songs on there because it has all those built-in synths. [laughs] That was how I started releasing my own music, because all I really knew how to play was the piano. I would make a ton of computerized songs. I knew I wanted to make, like, “rock” music. I picked up my brother’s guitar in maybe eighth grade with the goal in mind of being able to record it. But I was hyper-confident from the very beginning. Looking back on the songs I recorded, the songs sound like fucking shit, but that’s how I am, I guess.

THE PR GAME: I don’t really promote my music. I’m definitely confident, but I meet so many other people that are confident in their music too, you know? I know that I’m not good to everyone. I’d rather have the music speak for itself and whatever success I get from that is kind of pure. I’d rather not promote it and have people listen to it based on what I say, because if it’s not good, it hurts their perception of me. That’s a really self-conscious way of looking at it. If I keep going, I’m sure I’ll eventually be comfortable in treating it like a business or something, but as of now I’m still an insecure person about that kind of shit.

ON HIS INTERNET FOLLOWING: It doesn’t even sink in when someone compliments me. I just got an email today from some kid in New Zealand who was saying the nicest shit to me. It’s awesome, it’s just surreal. If you told me in the past that it’d be happening, I’d be flipping my shit, but now that it actually is it’s like it doesn’t penetrate my brain or something. I know it’s cool, I’ve just yet to become conscious of it or something [laughs].

“BASEMENT SCENE”: There’s a ton of places to play [here in Philadelphia]. When I was in high school, my band the Skin Cells, who are my friends from growing up, we used to play in Philly all the time because there were so many houses to play at. It seems like it’s diminished a lot in the past couple of years, but there’s still a good amount around Temple. They just don’t seem as legitimate as they used to be, or maybe they just seemed legitimate because I was so much younger. I guess the people that were putting on shows have moved away, it’s probably still happening but I’m just a little bit more out of the loop because I’m not really punk rock. Maybe it’s not even true and I just haven’t been paying attention [laughs]

“YOU CAN GO YOUR OWN WAY”: I often send my songs to my friend Emily Yacina who will add harmonies, but other than that I do everything myself. That’s definitely my preferred way to work. I think I’m a control freak. I get hyper-focused and when someone offers advice—even if it’s really good advice—I talk myself out of whatever they say. I’m just real anxiety-ridden when it comes to creating my own shit. I only trust myself 100 percent. I don’t trust anyone else. I’m okay with playing in bands because it’s not a direct representation of myself. I don’t really care if it’s perfect or not. I can remove myself. Everyone knows this music is me, I couldn’t bear to put something out that would represent me in a way that I didn’t want to be represented.